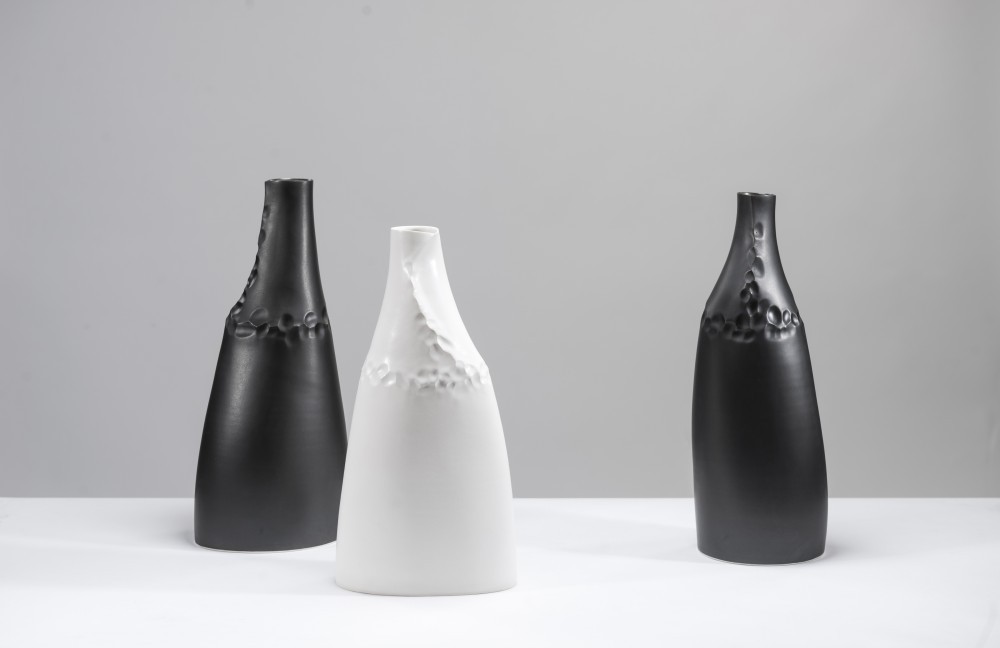 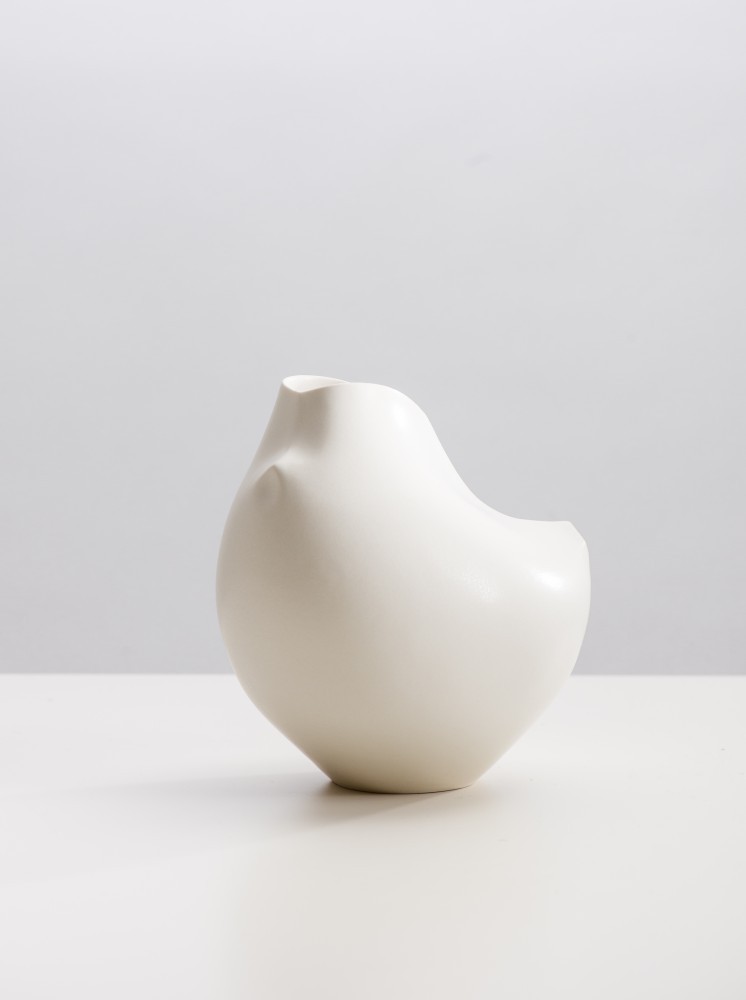 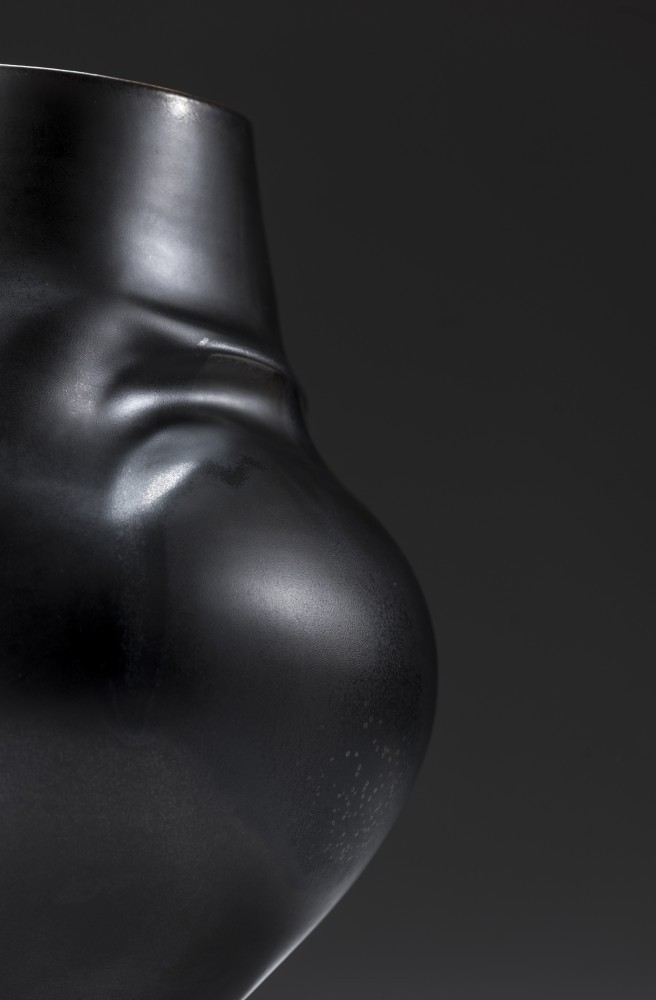 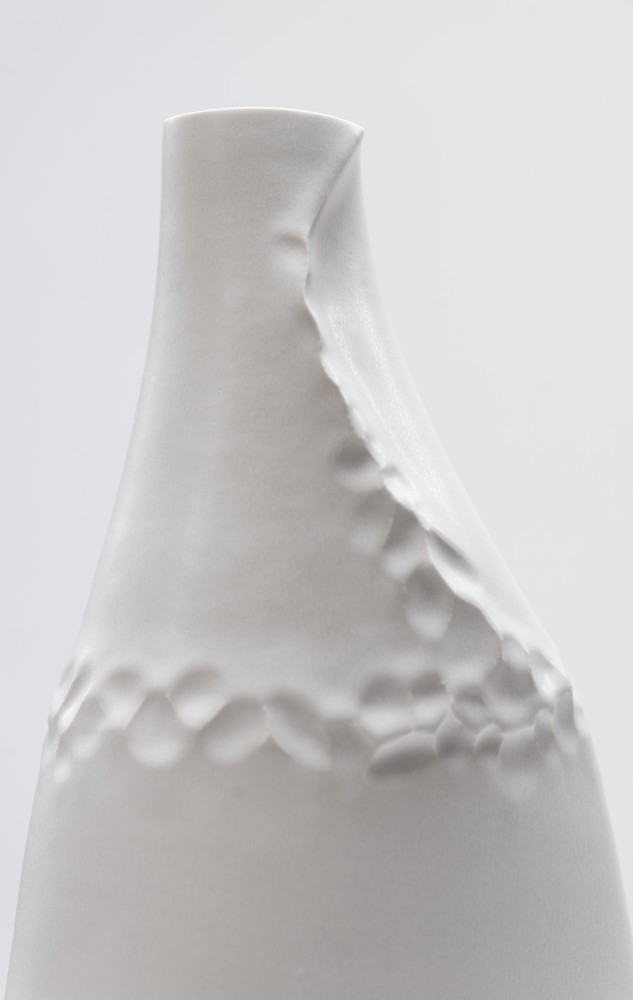 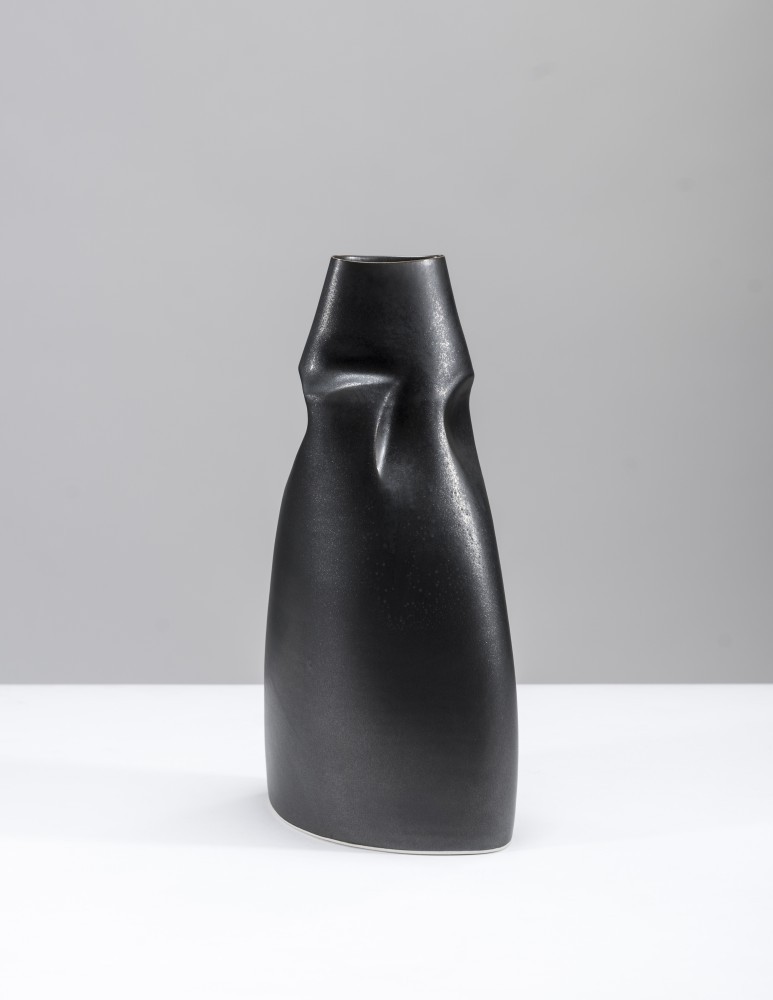 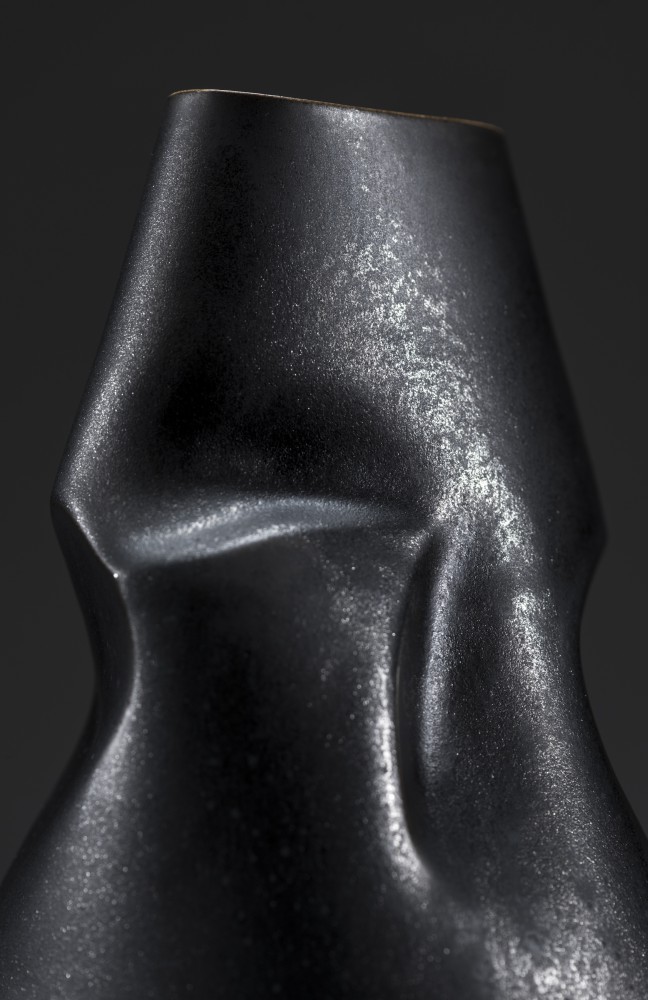 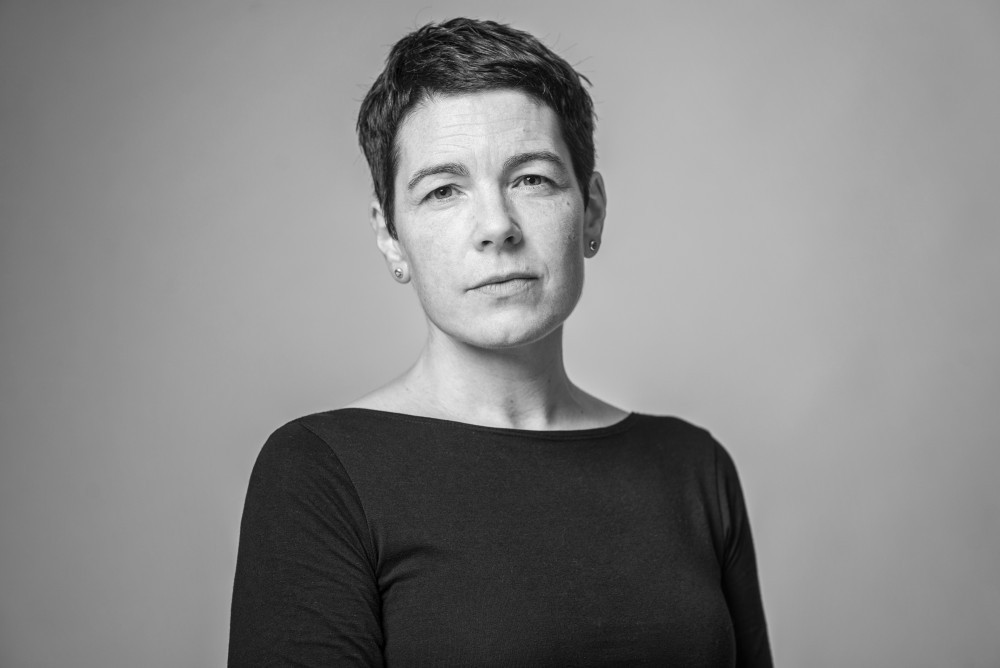 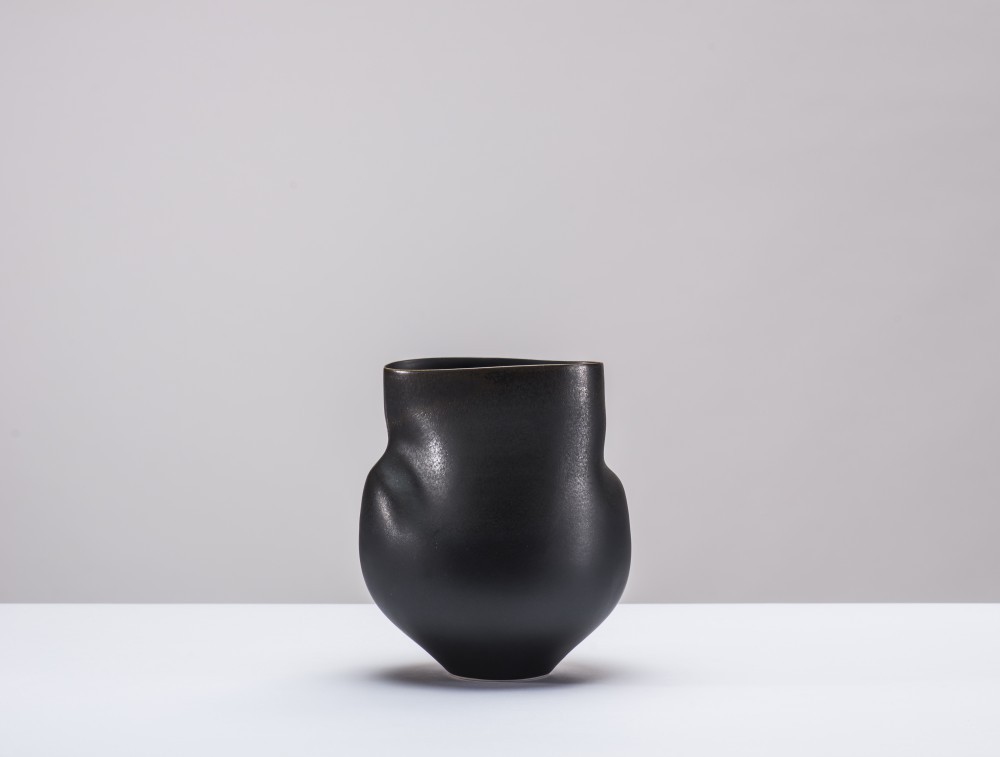 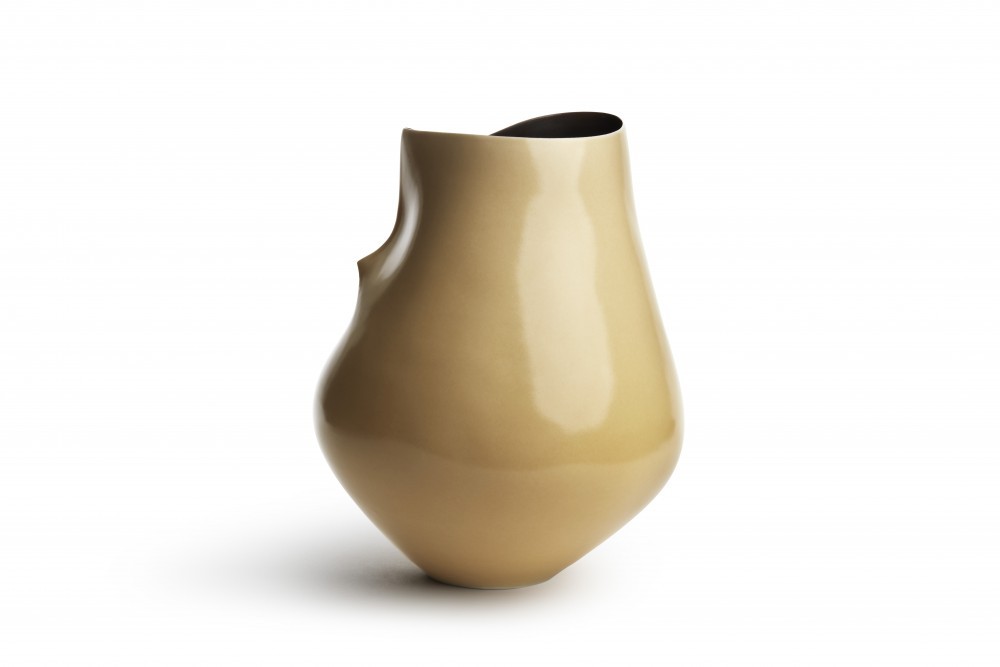 INTERVIEW WITH SCULPTOR SARA FLYNN ABOUT HER PORCELAIN FRIENDS

Irish-born ceramic sculptor Sara Flynn is known for her distinctive pots and vessels, always glazed to perfection in either black or white, and the occasional speck of color. Trained at the venerable Crawford College of Art and Design in Cork, Ireland, Flynn uses her intimate knowledge of porcelain and clay to mold her widely-exhibited semi-biomorphic forms. A finalist for the prestigious Loewe Craft Prize in 2017, Flynn is now one of the expert judges for this year’s prize. PIN–UP called Flynn up in her Belfast studio to talk about her influences, process, and the importance of learning from your mistakes.

What initially led you to ceramics? When did you know it was the medium for you?
I went to art college and I thought I would be a painter. The first year was a foundation year, where you get to try a lot of different materials and lots of different ways of making. I tried painting and realized it wasn’t the right fit for me. But I got to work with clay and I immediately adored it.

What were you influenced by, was it other Irish potters and ceramic traditions? Or something else?
I don’t even have to hesitate: Hans Coper was a major hero for me, and I think Lucie Rie’s work with glazes and surfaces is gorgeous. Rie and Coper were working in London, coming on the heels of Bernard Leach, and they were moving away from function, which clearly ticks a box for me, they didn’t see it as a bad thing, especially Hans Coper who was making forms, and he wasn’t having to justify function. He had the confidence to say “I’m making these forms.” They’re basically sculptural pieces, and he was unapologetic about it at a time when that was unheard of to do.
I think this probably sounds a bit corny, but my mom was also a huge influence. Not in terms of clay, but in terms of creativity. My mom is one of these people who will try her hand at anything. I watched so much creativity in my mom. She didn’t have the money to furnish the house so she would go to auctions and pick pieces up for nothing and restore them. She tended a beautiful garden and grew her own vegetables and then would make amazing food from the vegetables. It was really hard work, but she did it with joy. It was definitely a creative streak that looking back was massively influential.

Maybe we can see the lineage from heirloom vegetables from your mother’s garden to your work’s organic forms. (Laughs.) I would also like to talk about material. You primarily work with porcelain, which perhaps unfairly is often given a higher place in the ceramic hierarchy. How do you work with your chosen material?
Porcelain just happens to be the right material for the sort of edges and finish that I want. It’s not a better material than a stoneware clay or an earthenware clay, they just have different qualities. It’s very, very plastic, so it’s really fine and very goopy to work with. As soon as you put it on the wheel and you add water and you start to try it throw it, it wants to flow back down again. It’s really difficult to get it to hold its shape when you’re throwing it. I’m kind of in a groove with it because I work with it all the time. Often I describe it as my relationship with the material informs the forms that are created, which sometimes I think sounds a little bit pretentious or convoluted. Because I understand porcelain it’s like a friend you hang out with all the time.

A quirky friend?
Exactly. It’s a one of those tricky, tricky friends, but one you love all the same. I understand its moods, so If I’m tuned into it properly, I can get it to do what I need it to. Though, that sounds like I’m in control of it, I’m absolutely not. It’s in control of me, but I can cajole it and tempt into certain forms at certain stages. So long as I’m tuned into what it will do as it goes through those drying stages, I can know what different things can be done — I can make a certain cut at a certain stage; if I leave it and compact it when it’s a bit dryer I can achieve something else with that cut and from how I fold it or pinch it, pull it, push it from inside, poke it from outside, scratch it, scrape it, all of those things. That’s the bit I really enjoy.

How much does failure inform your work? How do you think about process and experimentation?
Failure is a huge part of the process. Like with anything we learn from our mistakes. There’s loads of times where I’ve overfired a glaze and it runs off the pot or I’ve underfired it and I need to refire it again and the refire destroys it even more than the underfiring had. But with each one, so long as I keep my records, take photographs, write down what I did, draw diagrams of where it was in the kiln so I’ll remember the next time and it will help me build up experience to bring to future pots. If I get to a point where I know how to do it right, I only know that because there have been 40 pieces that have not worked out prior to that.

So a lot of trial and error.
Huge amounts of trial and error. There’s so many layers to of the ceramic process, trying to bring the pieces to life. But when a piece is right there’s a magic to it and it’s worth all the ones that didn’t work out.