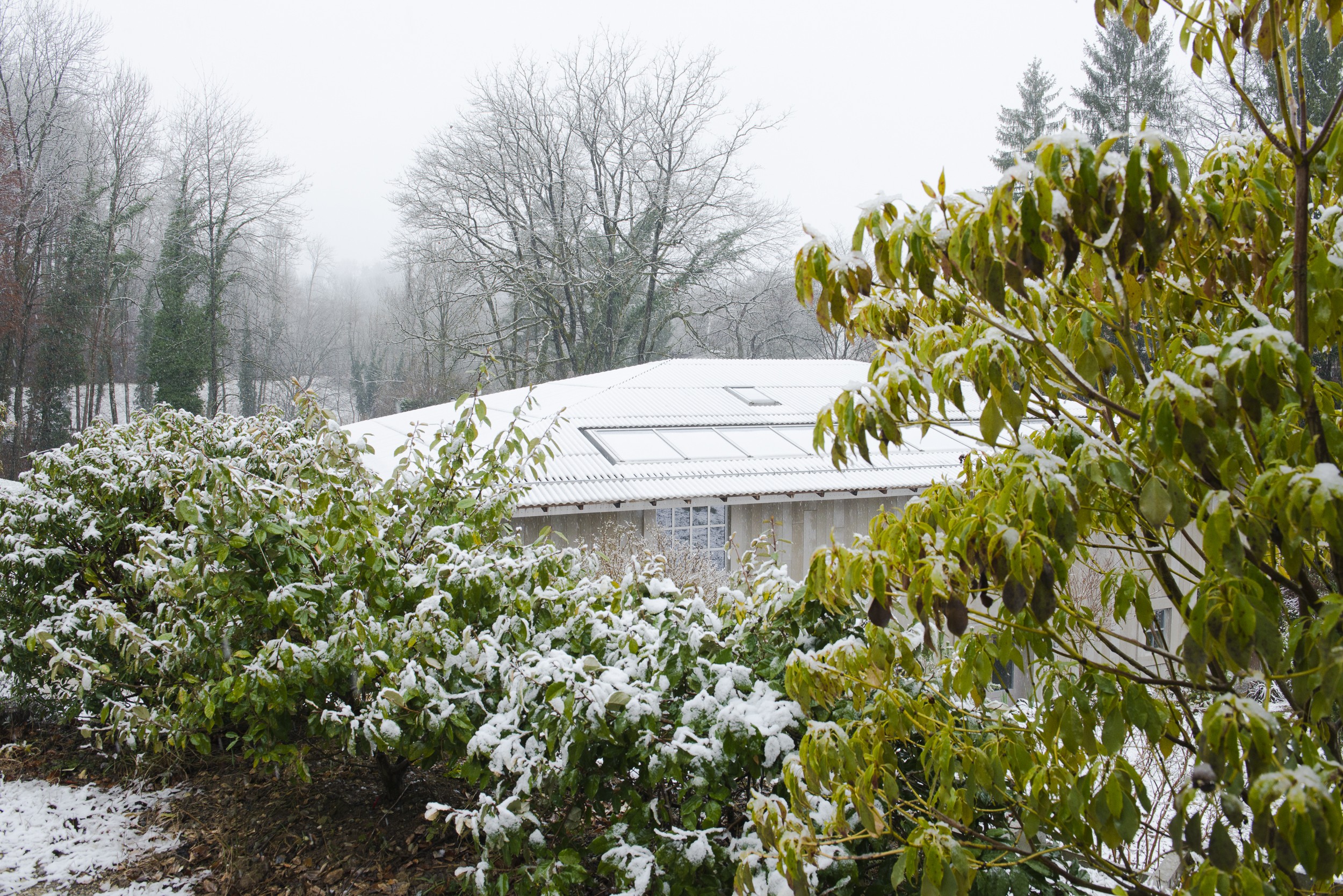 View of 'the house no.1' located in Würenlos near Zurich. Photography by Johnny Graf x Dominik Hodel. 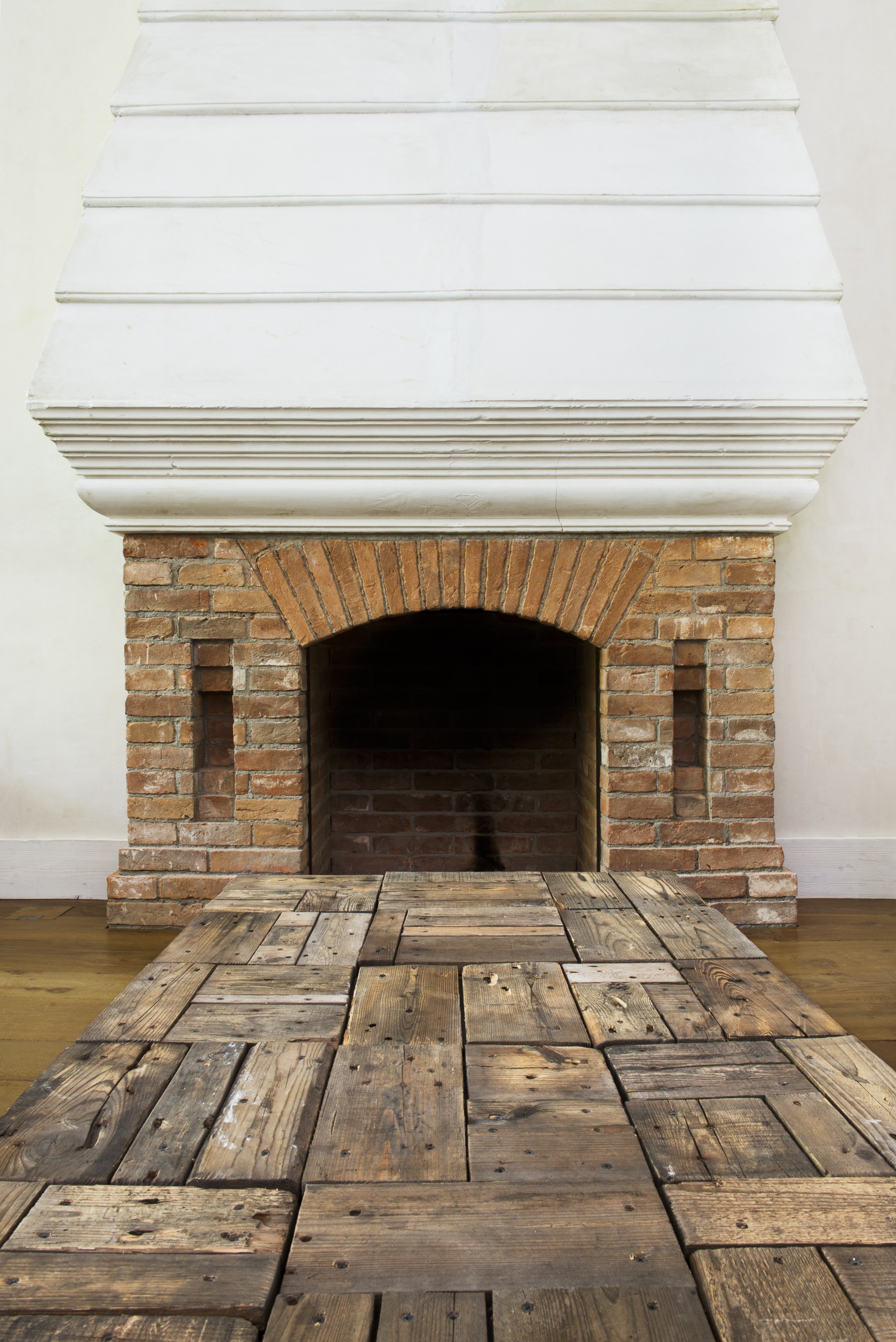 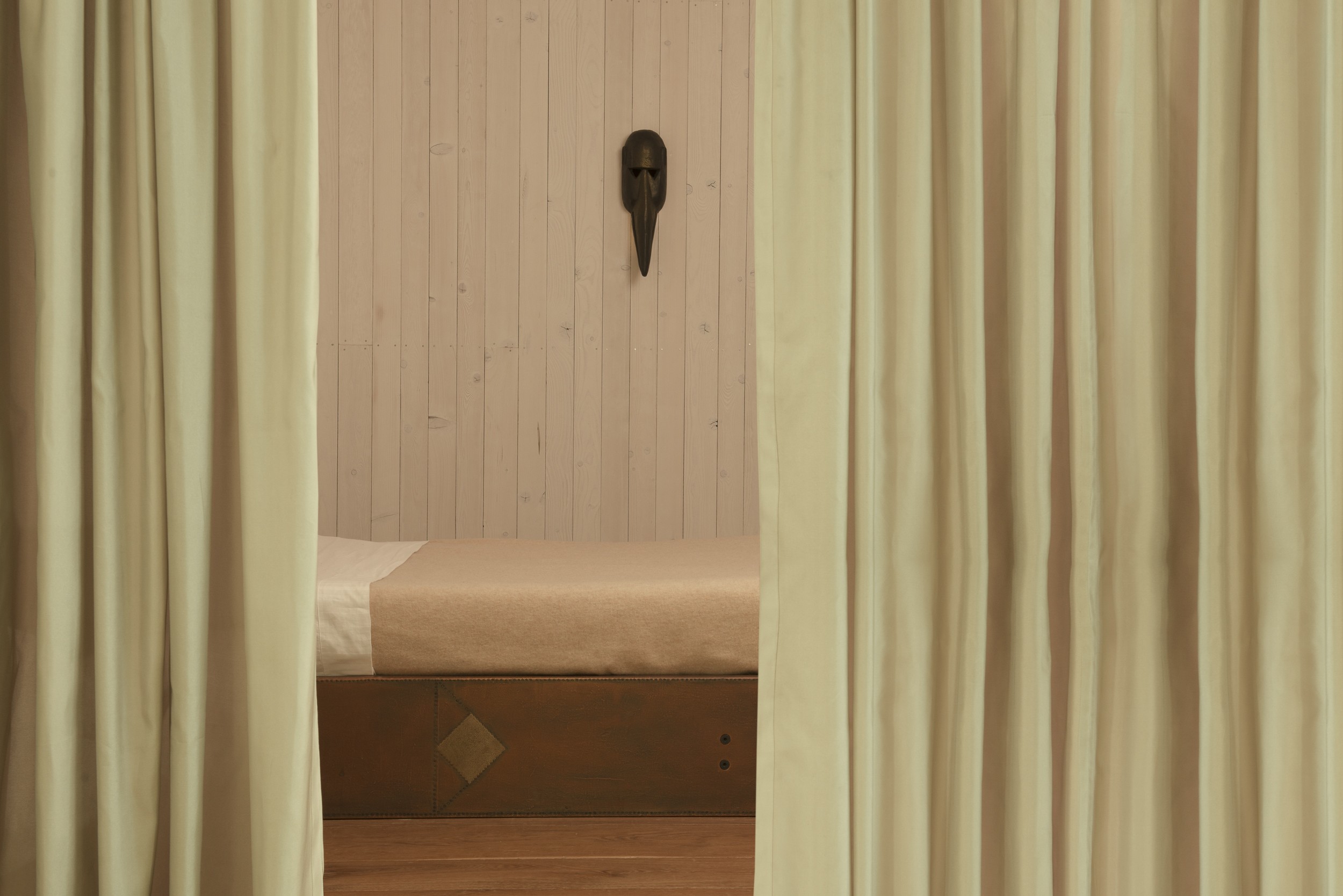 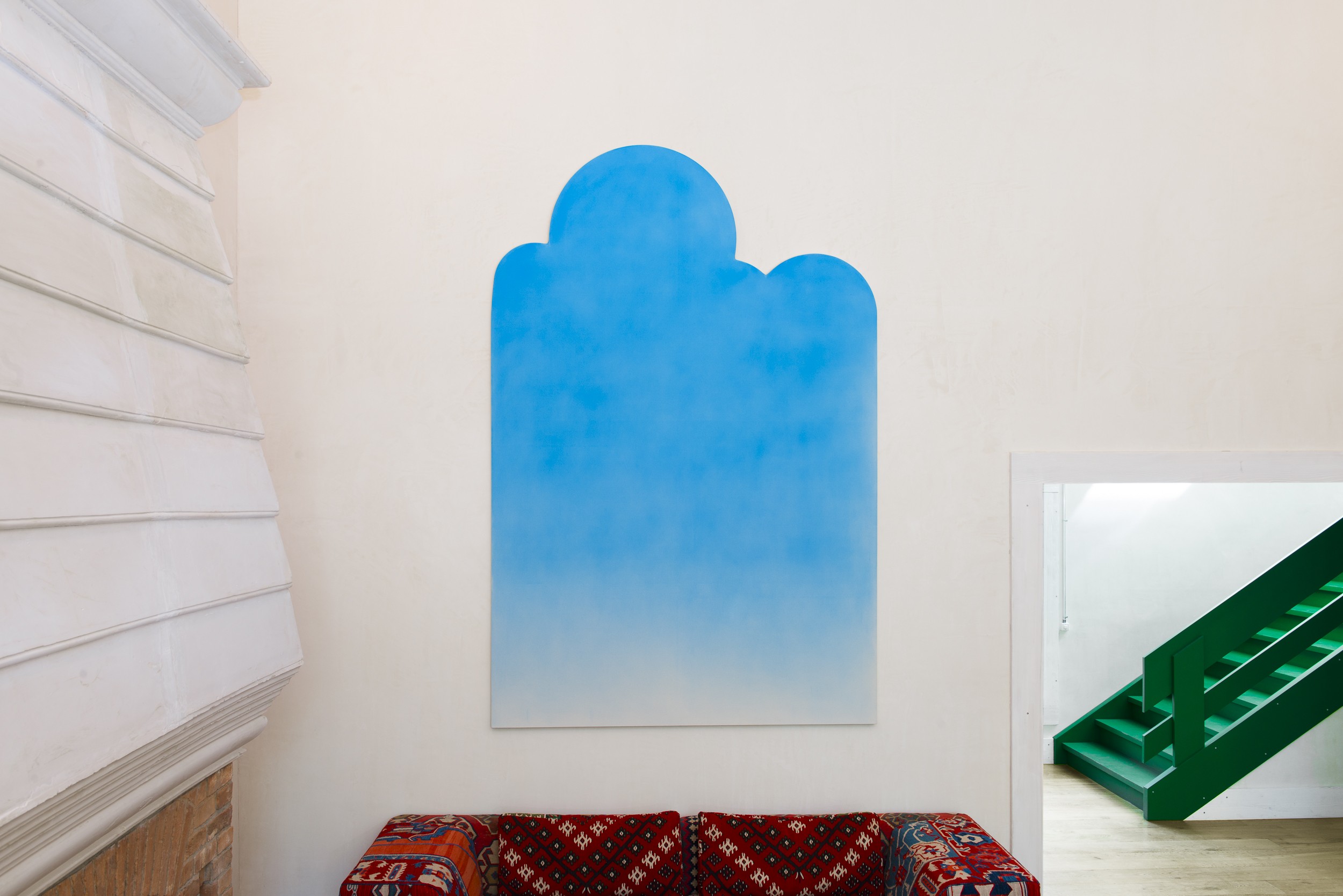 View of the living room with one of Rondinone's cloud paintings. Photography by Johnny Graf x Dominik Hodel. 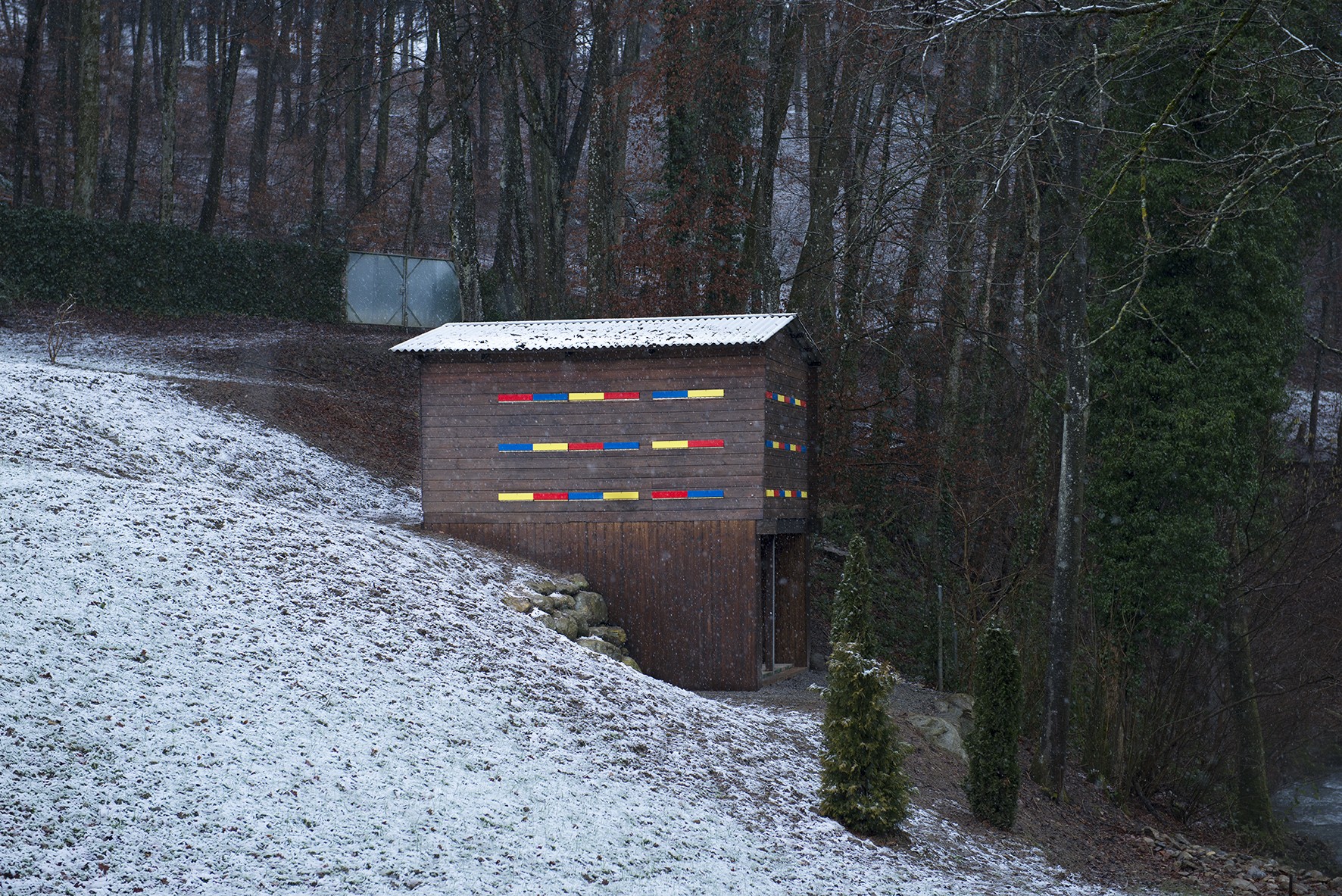 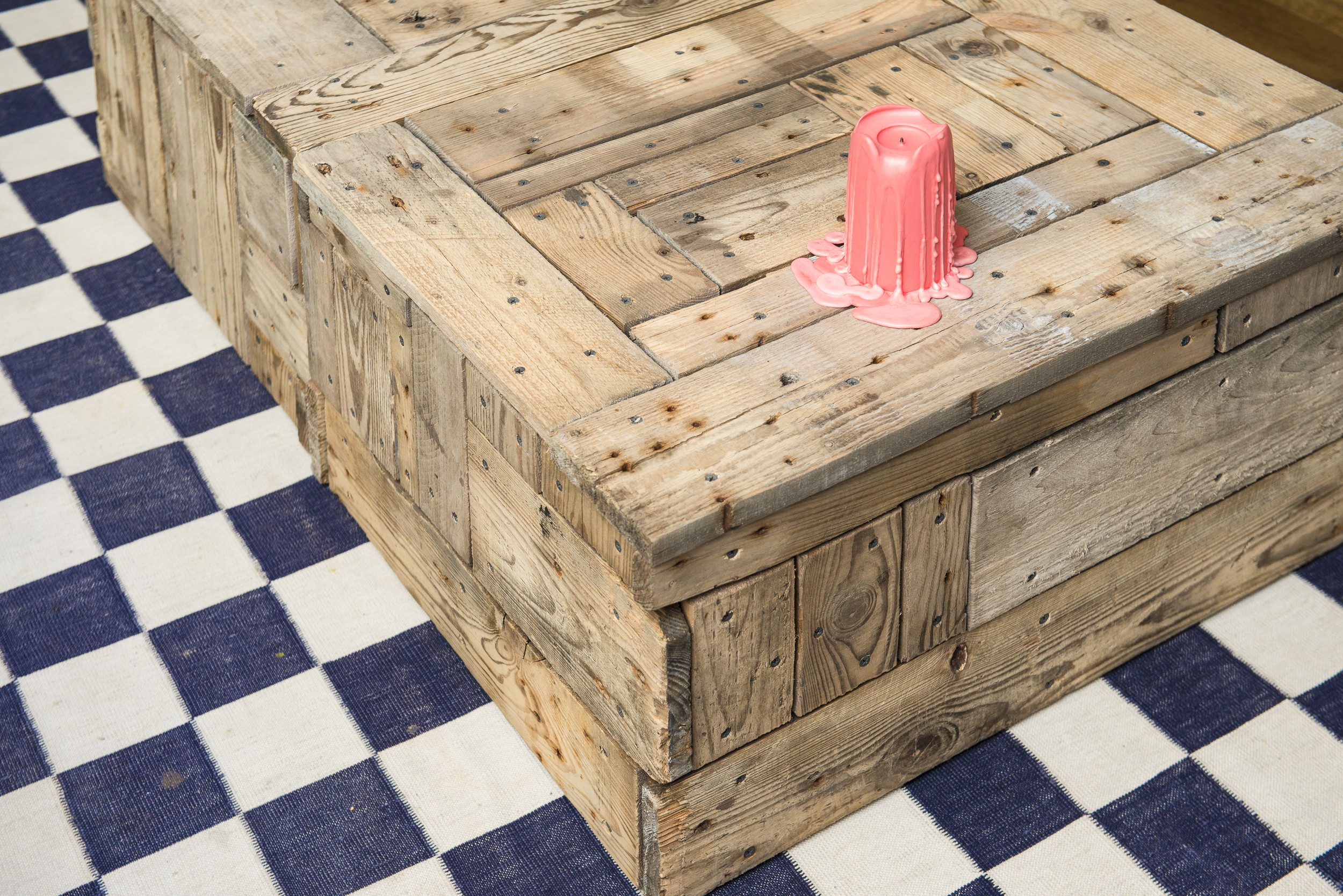 The house was created as a Gesamtkunstkwerk, "like a walk-in sculpture,” explains Rondinone. Photography by Johnny Graf x Dominik Hodel. 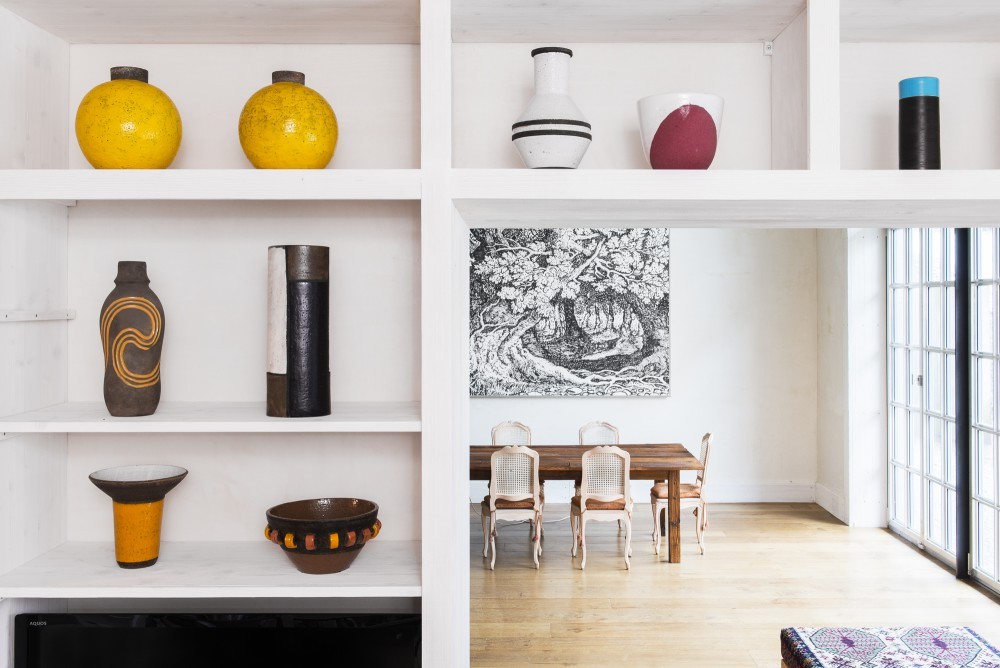 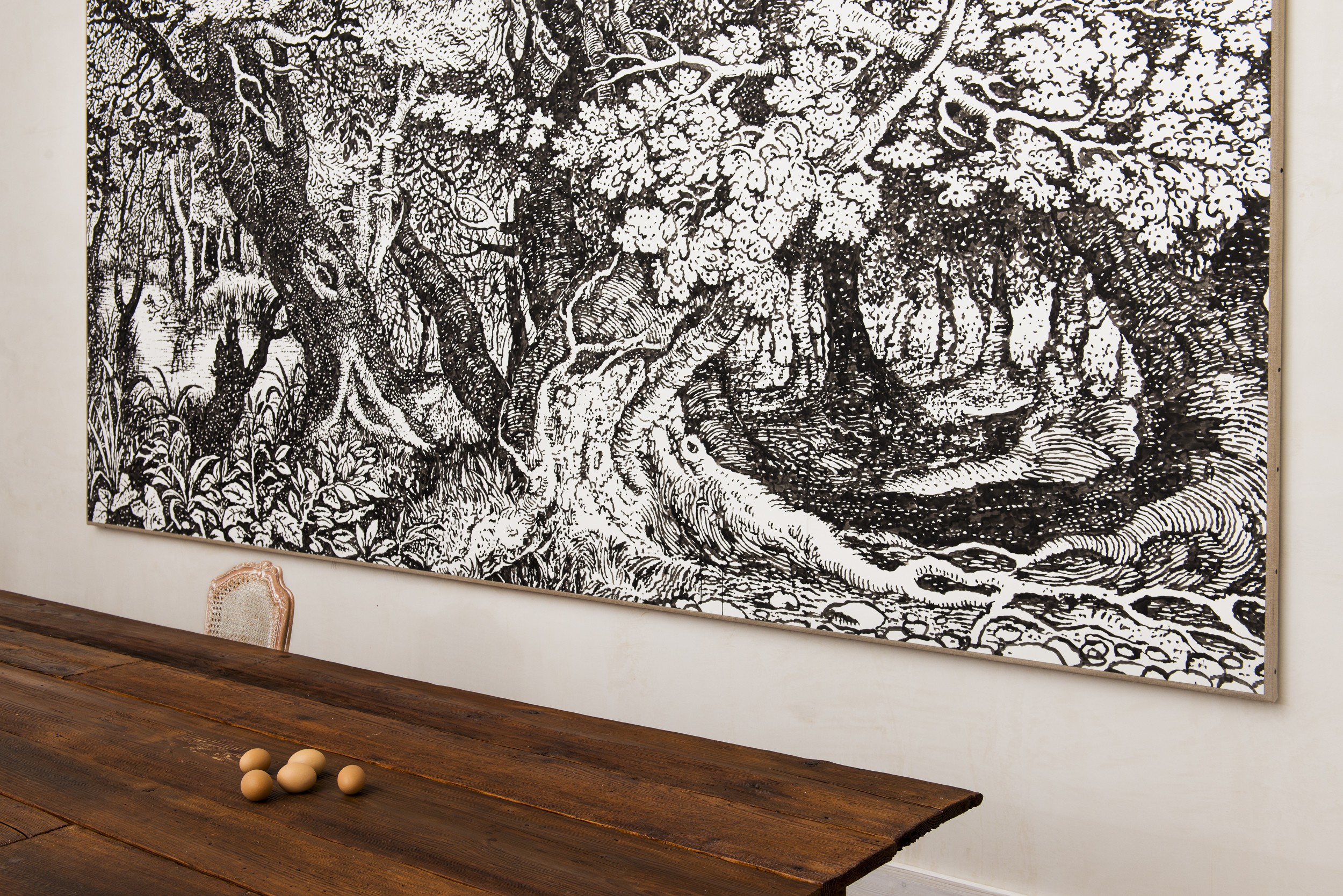 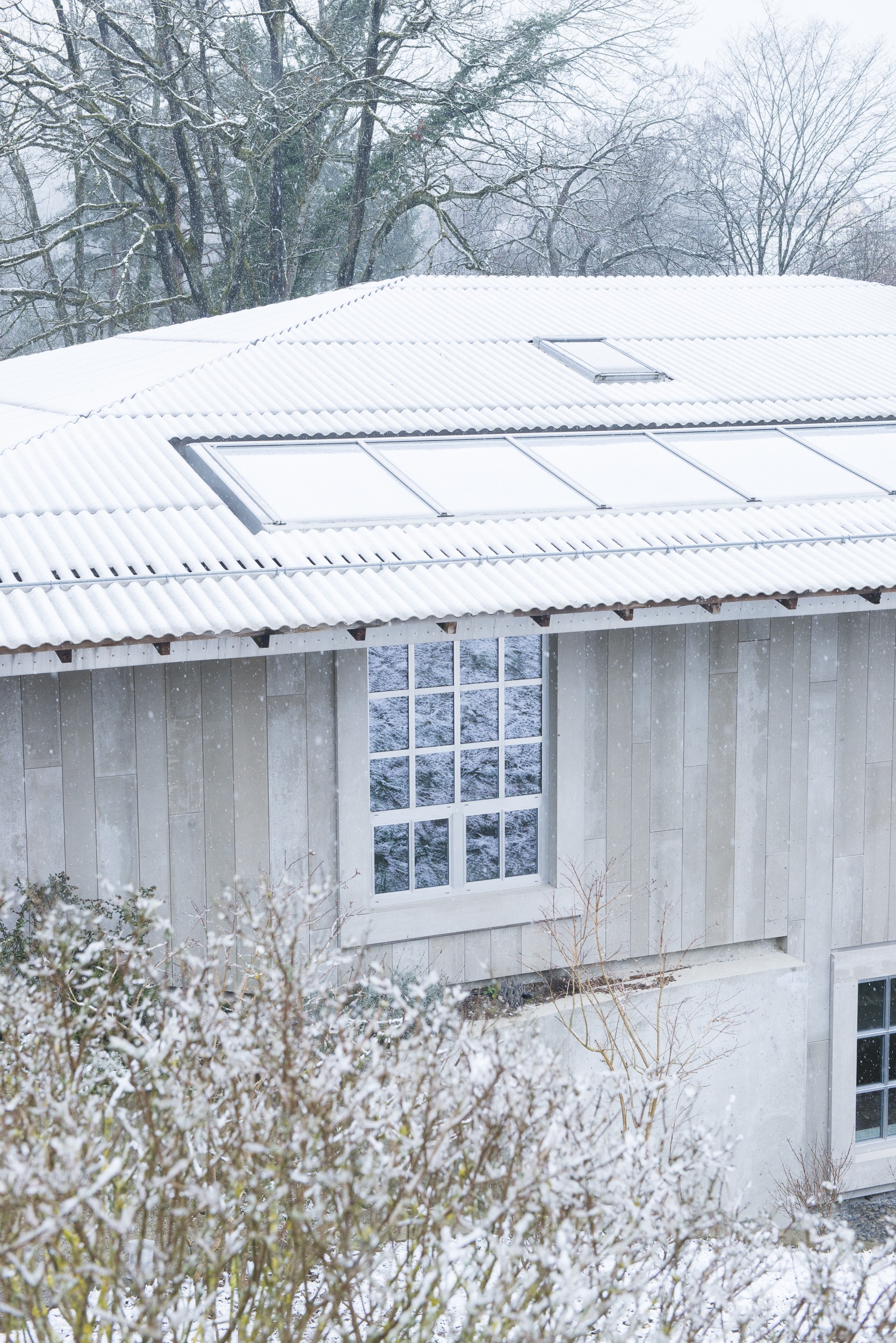 With the help of architects Andreas Fuhrimann and Gabrielle Hächler (AFGH), Rondinone synthesized custom-built interiors with prefabricated exterior elements to create a hybrid space that is both sculpture and home. Photography by Johnny Graf x Dominik Hodel. 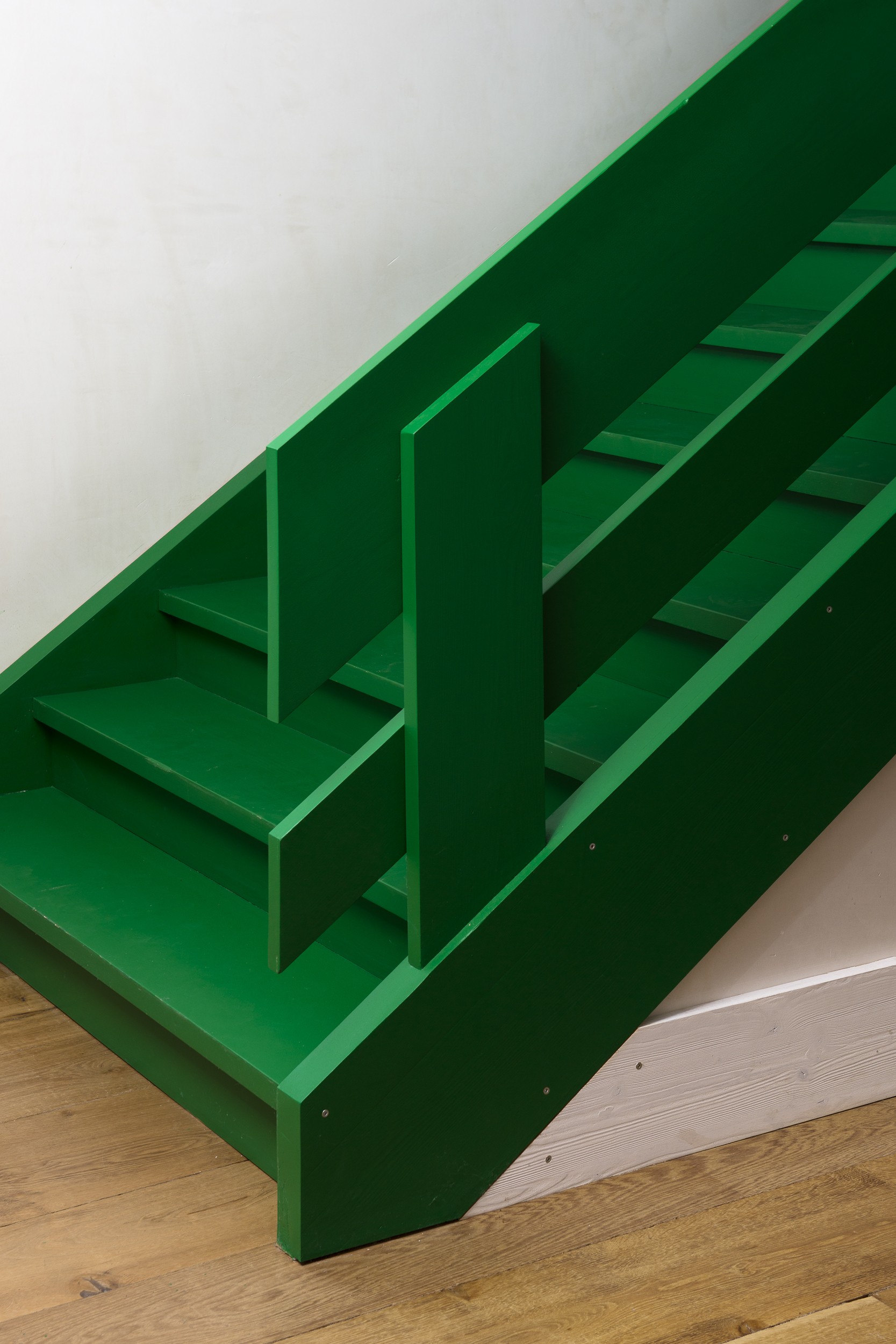 Throughout the nearly 3,900 square feet of living space, subtle textures and neutral tones reign. The one exception to this quietness: a vibrant-green staircase that leads from the ground floor entrance to the second floor’s gallery and studio space. Photography by Johnny Graf x Dominik Hodel. 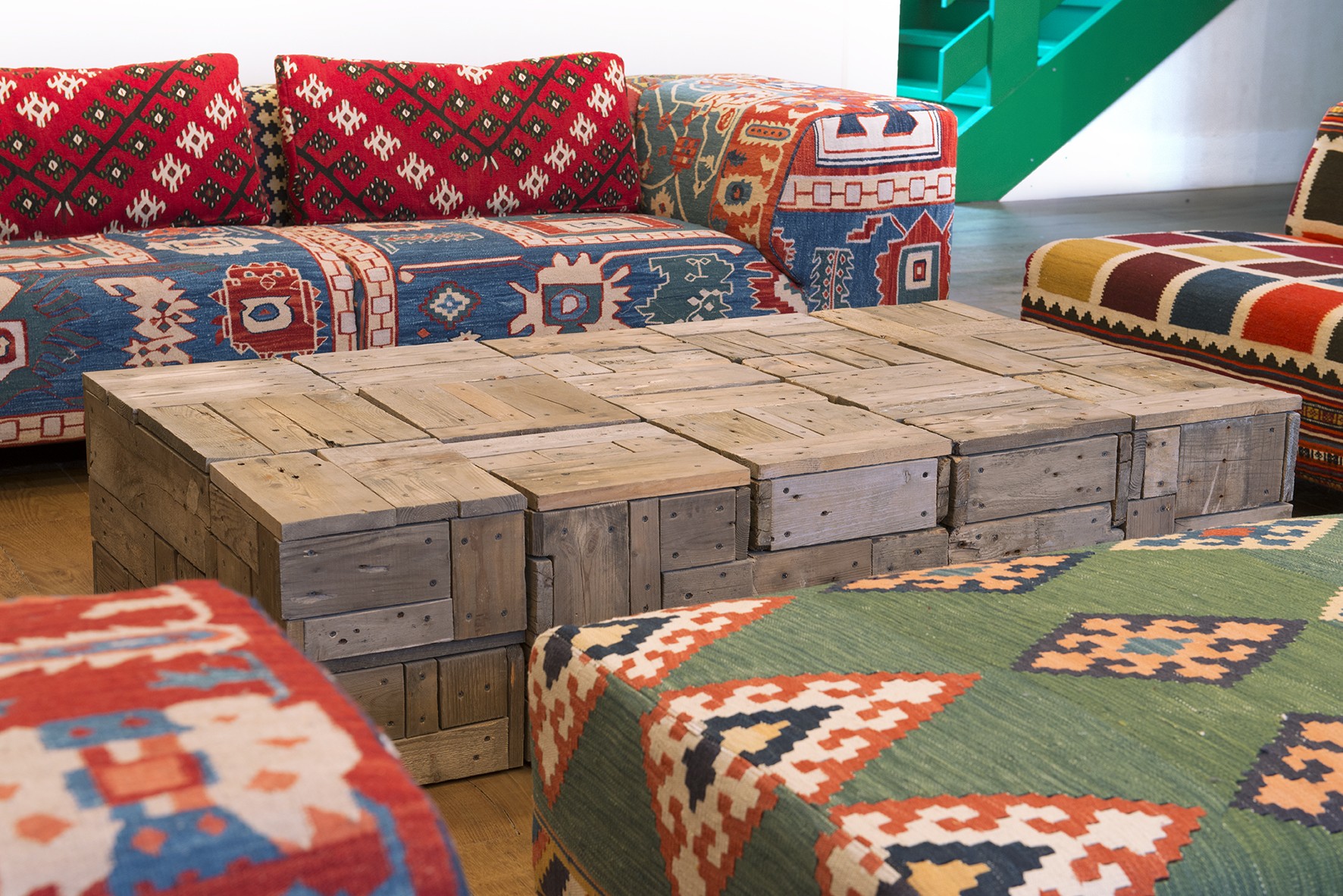 The coziness and restraint are a sleight of hand thanks to which absurdity becomes conventional, so that the humble and the grand, the folkloric and the urban, all coexist. Photography by Johnny Graf x Dominik Hodel. 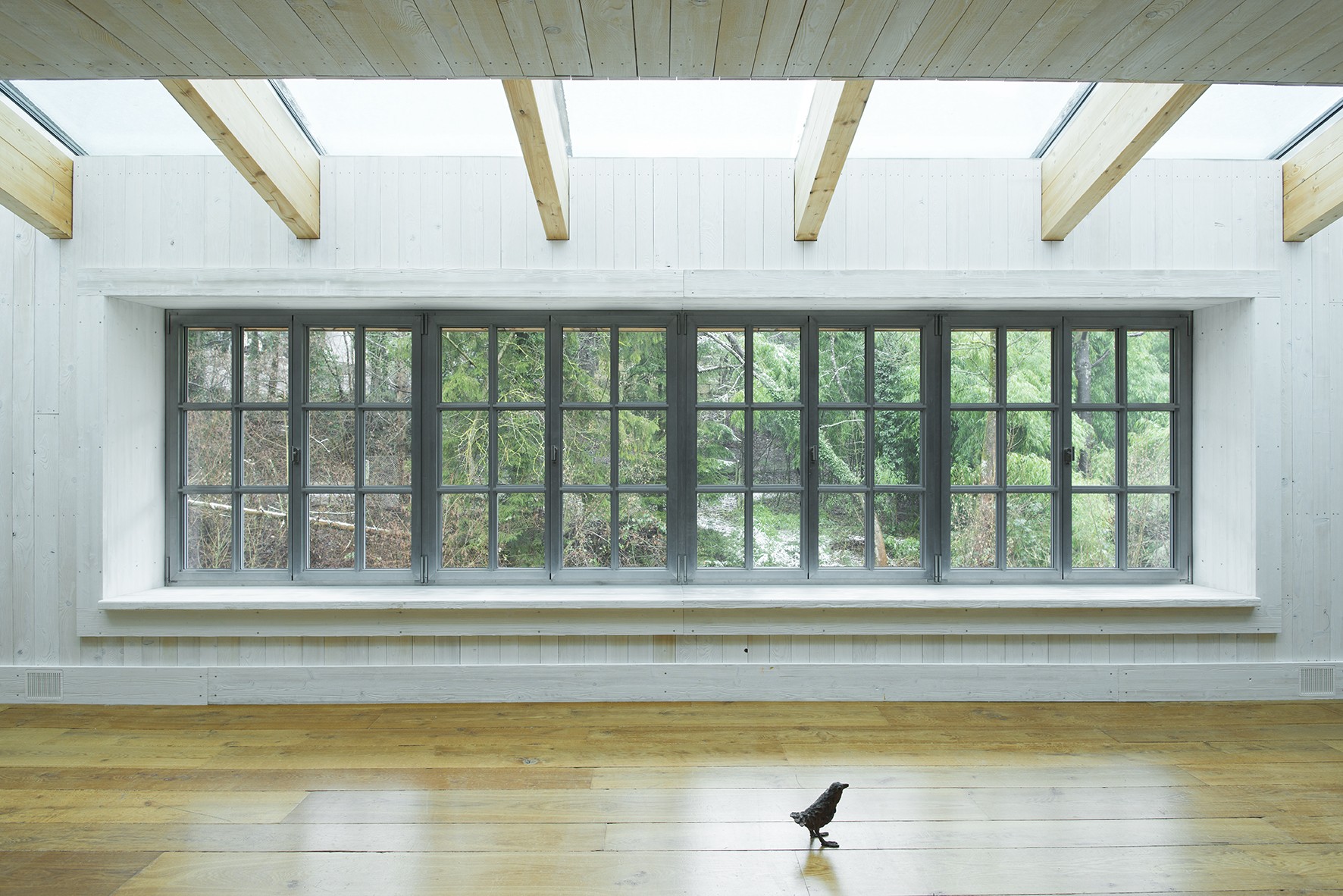 Würenlos, a quaint village just north of Zürich. A narrow lane leads into a forest. Where the road ends and a dirt path begins, a metal gate opens to reveal the refuge of Swiss artist Ugo Rondinone. Raw concrete steps lead down to the front door of a pale house dug into the slope. From the gate, the house’s lower story is scarcely visible, obscured by the striking cantilevered eaves of its corrugated fiber-cement roof. The overall impression is of a cross between a chalet, an Arts and Crafts villa, and a Japanese tea house. If descending to the entrance feels like an act of retreat, once inside new perspectives emerge. The hallway leads to a giant salon and dining room at the center of the building; its ceiling is over 12 feet high, and its huge French windows open onto a small meadow and the sound of a winding stream gently splashing in the distance. In summer, the smells and delicate colors of the Mediterranean-style garden permeate the entire property.

Rondinone is no stranger to architecture, whether in his art practice or in collaborations with architects. In the early 2000s he outfitted the Seidenspinner restaurant in Zürich, creating a mirrored mosaic that covered the walls and ceiling, and which was the defining element of the space. In Harlem, New York, where he spends most of his time, he recently teamed up with architect Alicia Balocco to transform a deconsecrated church into generous studio and living space for himself, his partner the poet John Giorno, as well as visiting artists.

For the house in Würenlos, which was completed earlier this year, Rondinone teamed up with Gabrielle Hächler and Andreas Fuhrimann, a duo of Zürich-based architects whose practice AFGH counts many art-world luminaries in its client list, among them art patron Maja Hoffmann, gallerist Eva Presenhuber, and artist Pipilotti Rist. “I wanted to create a house that was a Gesamtkunstkwerk, like a walk-in sculpture,” explains Rondinone. It is also a space where he and Giorno can live and work in peace. The artist and architects opted for a muted palette of colors and materials: unpainted engineered wood panels cover the façade in vertical stripes, camouflaging it during snowy winters, while inside the house, natural wooden floors compliment the pale plaster on the walls, which was mixed with beeswax to give it a soft luster. On the green staircase leading to the upper floor provides a striking touch of bright color.

The building’s quiet sea of neutrals provides the backdrop for some of Rondinone’s art, most of which is sculpture. “The house and its objects are basically a synthesis of my sculptural work.” And indeed, many seemingly benign building details (almost all of them custom-made) constitute direct links to Rondinone’s art practice: for the bathrooms, Rondinone opted for New York subway tiles, whose brick-like shape also inspired a series of freestanding paintings he recently showed at Galerie Eva Presenhuber in Zürich, while the living room’s extraordinary fireplace, so tall it nearly touches the ceiling, echoes his 2008 piece still.life. (john’s fireplace). There are many delicate touches such as the sculptural still lifes placed throughout the house, on shelves and window sills; what may look like a few casually arranged oranges turn out to be perfect bronze casts with unexpected heft. Behind a curtain off the salon, a sleeping “alcove” is more than large enough to host a king-size bed. The more you look, the more you notice the meeting of clever artistic and architectural minds. The coziness and restraint are a sleight of hand, a distraction thanks to which absurdity becomes conventional, so that the humble and the grand, the folkloric and the urban, all coexist harmoniously. This is a place of sanctuary and creativity where disbelief can be suspended. Back in 2014 Rondinone had his first exhibition in China, at the Rockbund Art Museum in Shanghai. For its title, the artist distilled life into three deadpan words: BREATHE WALK DIE. In his house in Würenlos, the sole act of living becomes art.