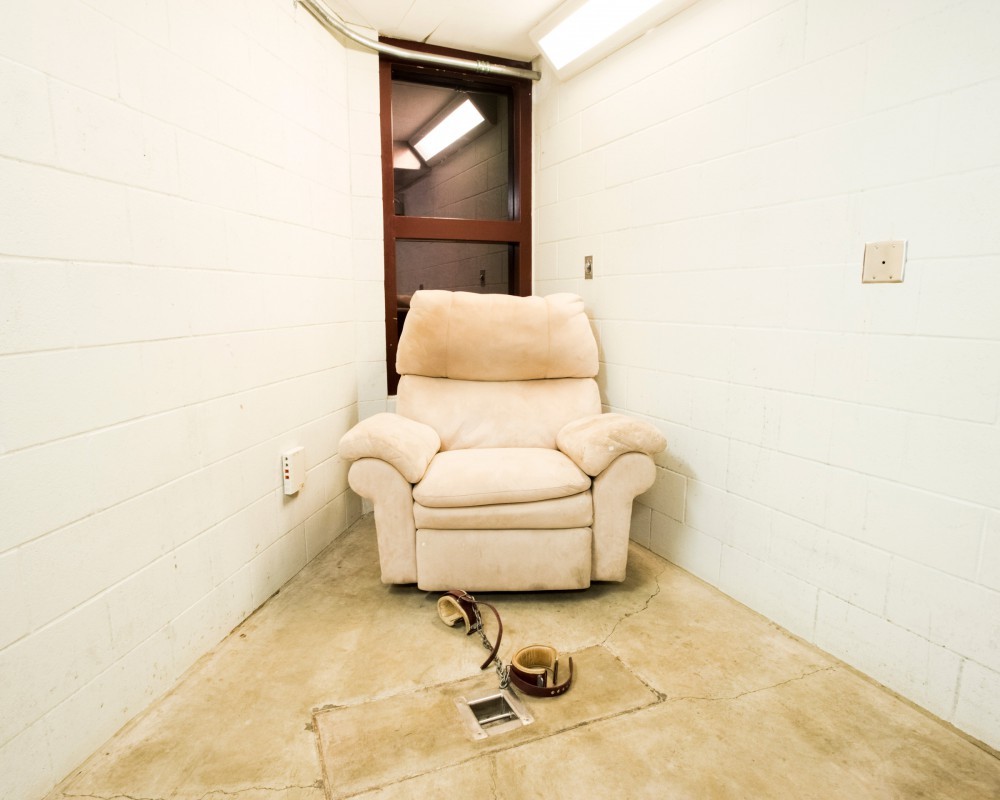 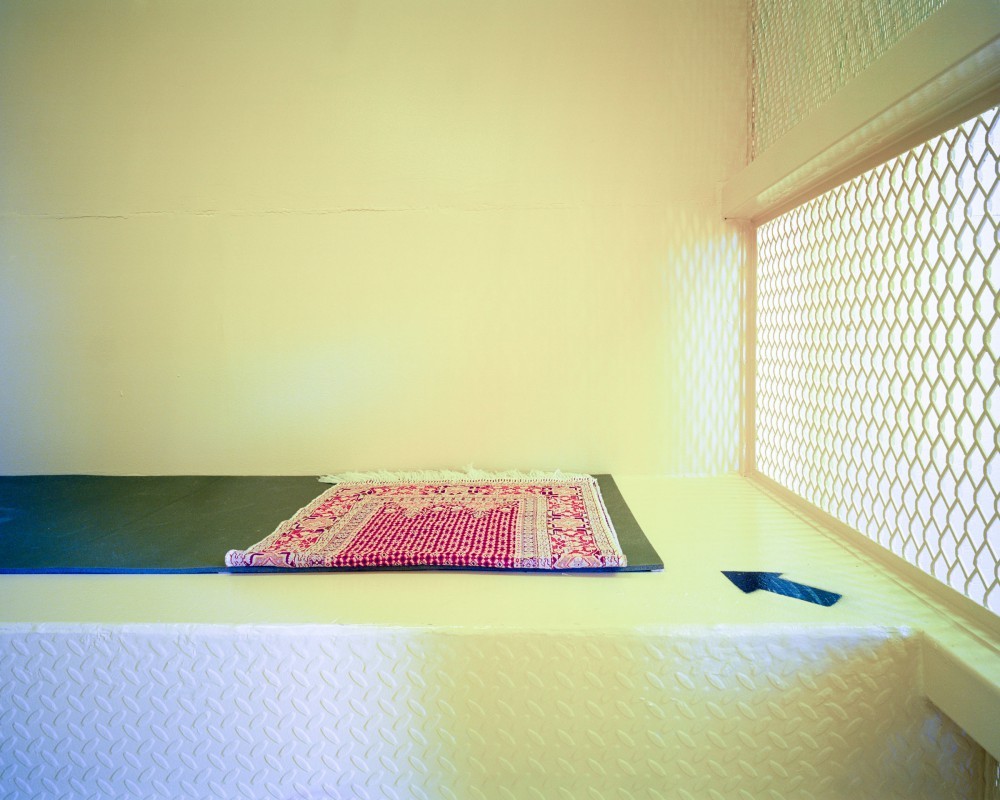 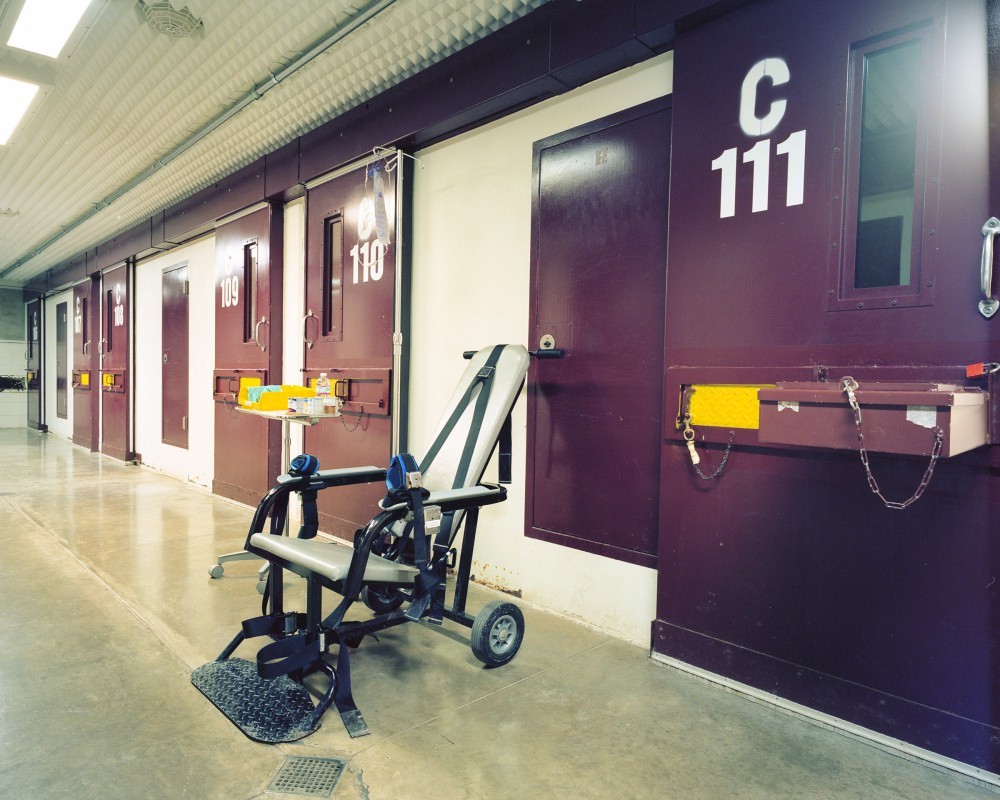 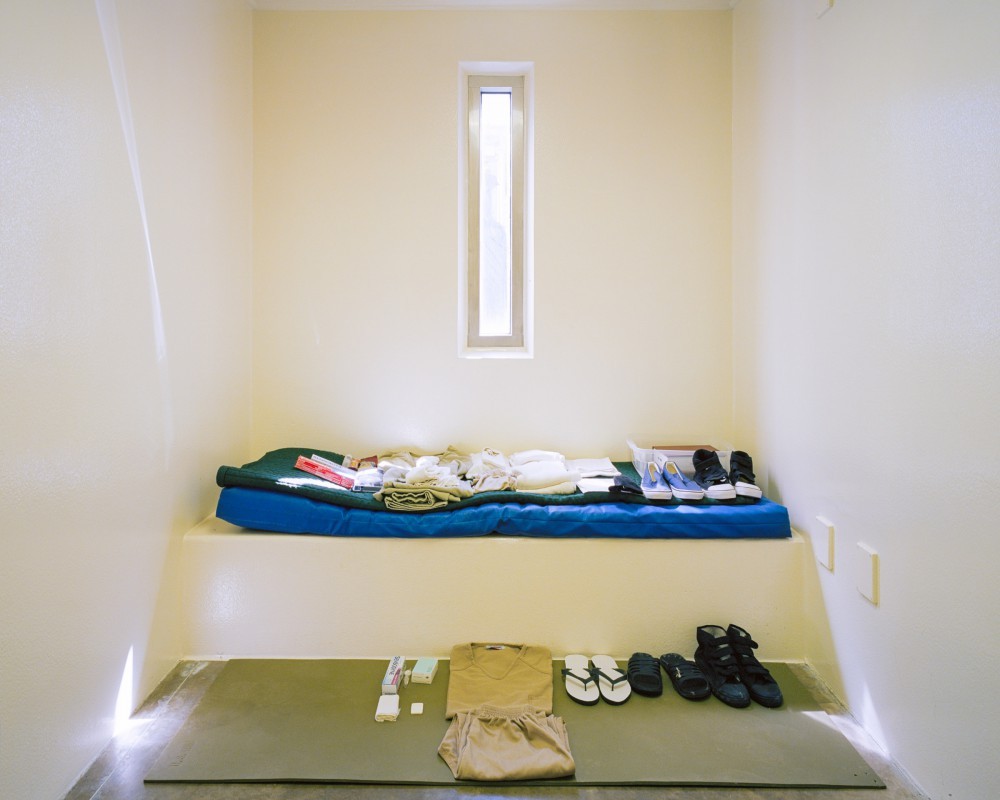 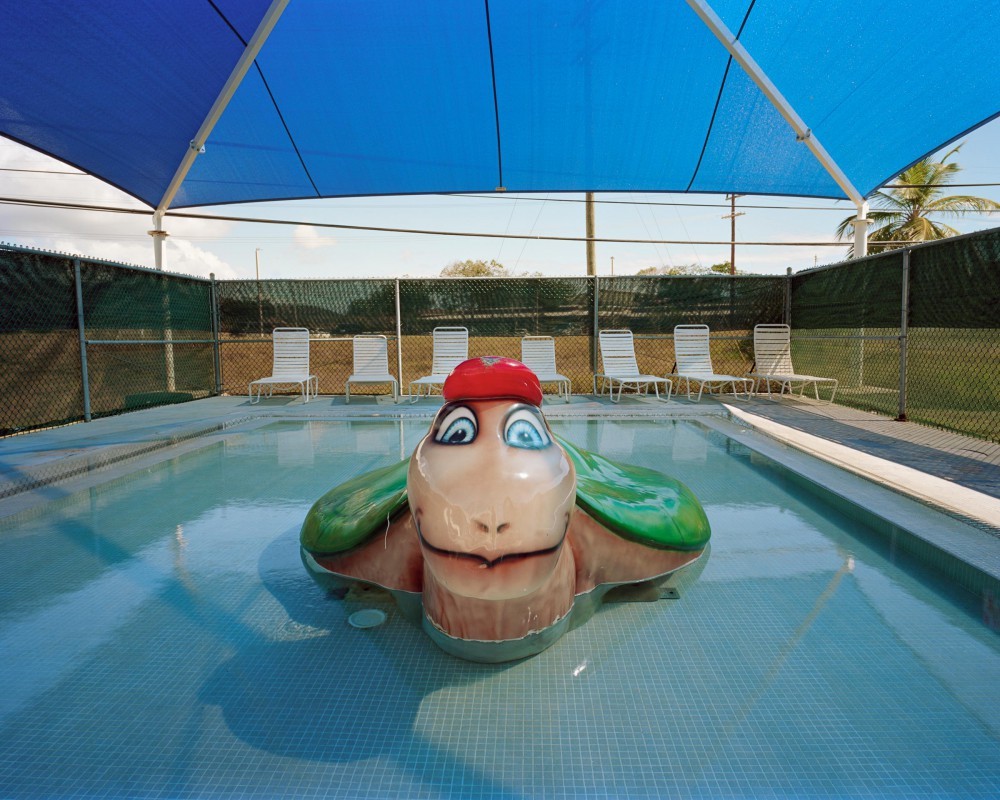 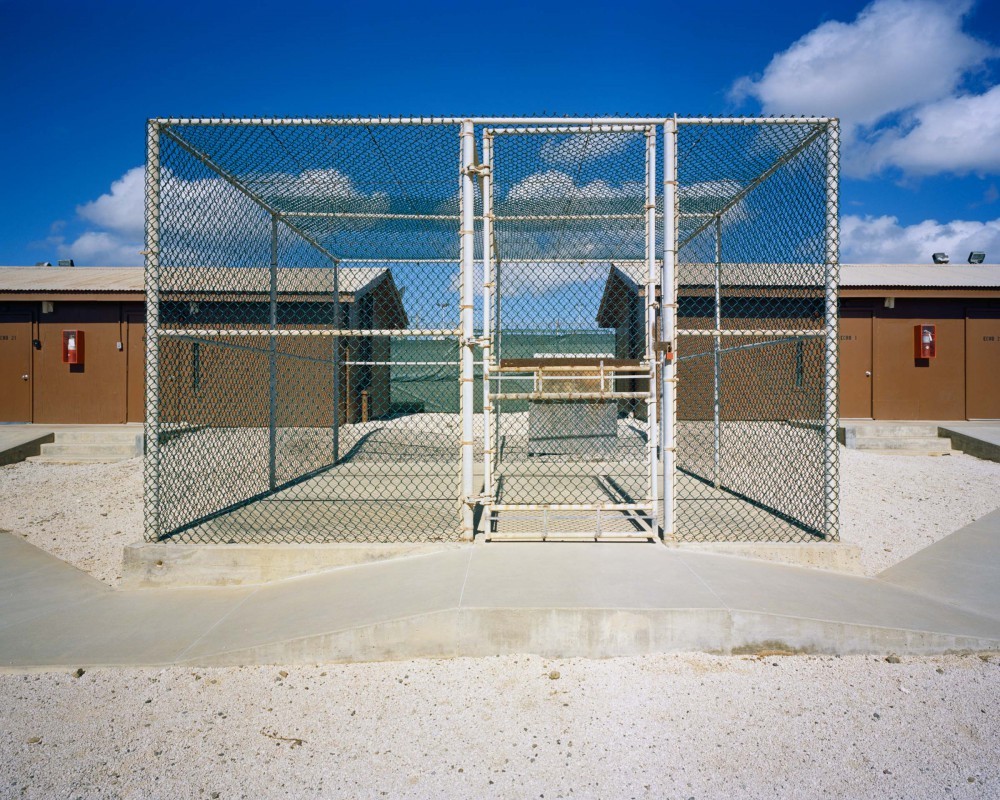 The infamous detention center at the Guantánamo Bay naval base in Cuba has been operated by the United States since 2002. Hundreds of men have been held there over the past 15 years, most without any charges being pressed against them, let alone being brought to trial. Many have been tortured or subjected to “enhanced interrogation techniques.” For military guards, however, Guantánamo (airfield code “GTMO,” colloquially pronounced gitmo) is one of the best jobs they could ask for. In stark contrast to the prison they operate, guards are treated to amenities such as a driving range, a bowling alley, the “Liberty Center Band Room,” and Cuba’s only McDonald’s. A gift store sells everything from “I ♥ Gitmo” lip balm to a teddy bear with a T-shirt that reads “It don’t GTMO better than this.” These disturbing, even absurd, juxtapositions are the subject of artist Debi Cornwall’s book Welcome to Camp America, a collection of photos, essays, affidavits, emails, and other documents about the regime at the notorious torture prison.

Before becoming a full-time artist, you spent over a decade as a civil-rights lawyer in the field of DNA exoneration. How does that experience shape your current work?
I found that my background as a lawyer heavily informed the way I approached making the visual work, my research, the negotiation for access to Guantánamo, and even my choice of technique. At Guantánamo, military authorities control who has access and what you may photograph. They require digital photography so that military censors can view every part of every image each day directly off the memory chip and delete whatever violates the twelve pages of rules that you sign as a condition of going. On my third trip to Guantánamo, I negotiated permission to photograph on film, which had not been allowed before at military prisons. The lawyer in me wanted evidence, something physical to take away in a situation where, if an image were deleted, I would be left with no trace.

One of the rules was that you couldn’t photograph any faces. What was it like for you to photograph the life of prisoners and the sense of imprisonment without actually depicting them?
I took no images of the prisoners while I was there, only afterwards, when I had the opportunity to meet 14 men who had been cleared and released and are now living in nine countries. So, under those really strict constraints, I chose to focus on the spaces. That was a challenge: how do you document something that’s hidden from view?

You’re not only depicting the prisoners’ lives, but also an institution — both literally as a building but also as a concept with a set of laws, rules, and rule-makers. It’s an entirely bureaucratic, legal system that allows or even encourages these awful things like detention and torture to take place.
As an attorney I was focused on the systemic and the personal, asking how the machinery of power is creating injustice that affects individuals, relationships, and communities. This dual focus on the systemic and the personal is something I carried with me to my work at Guantánamo. It was very important for me to look at the physical spaces as a manifestation of power on an institutional level.

A bizarre manifestation of this power can be seen in the cover photo of Welcome to Camp America.
That’s the “Compliant Detainee Media Room.” In that room, inmates who follow military rules might be given the privilege of watching a censor-approved video in a soiled Barcalounger with one leg shackled to the floor while being surveilled through a double-sided mirror. This is something that any media representative will be shown on the standard media tour as an example of the creature comforts afforded to compliant detainees. According to the military, they range from that room with that chair to amenities that are referred to as “comfort items,” which are arrayed out in a sample show cell for media review. Those objects vary, depending on the level of prisoner compliance, from flip-flops to an extra blanket. The United States government is trying to market these comforts to the public through the press. “Look how much fun we’re having, look how comfortable we make our ‘guests’” was the message I took in. Whether it was stated in so many words or not, it was implicit. But adding a prayer rug and an arrow to Mecca in a tiny cell devoid of anything else but a mat and a built-in toilet next to the bed is a peculiar manifestation of comfort. Of course, when I later started meeting the men who had been held in those cells, they said, “Well we never got the large tube of toothpaste,” or “We were told, ‘We’re out of shoes in your size,’ or ‘Ask your interrogator for a pillow.’”

So in a way these rooms for the media are like sets. Are they even actually ever used?
They are units that are set aside and that don’t house anybody. They’re staged for the media tours, so they’re essentially just for show. For me they were an exercise in marketing and packaging. Which is why I photographed the souvenirs at the gift shop. This is the American way: if we can package it and buy it and consume it, then on some level we get it and are okay with it.

You capture this idea in the book’s title, Welcome to Camp America — is it America at its most extreme or, more grimly, is this quintessentially American?
That’s the question I’m asking myself: is Guantánamo Bay a state of exception or is it actually America embodied?

Interview by Drew Zeiba. All images courtesy of Debi Cornwall.