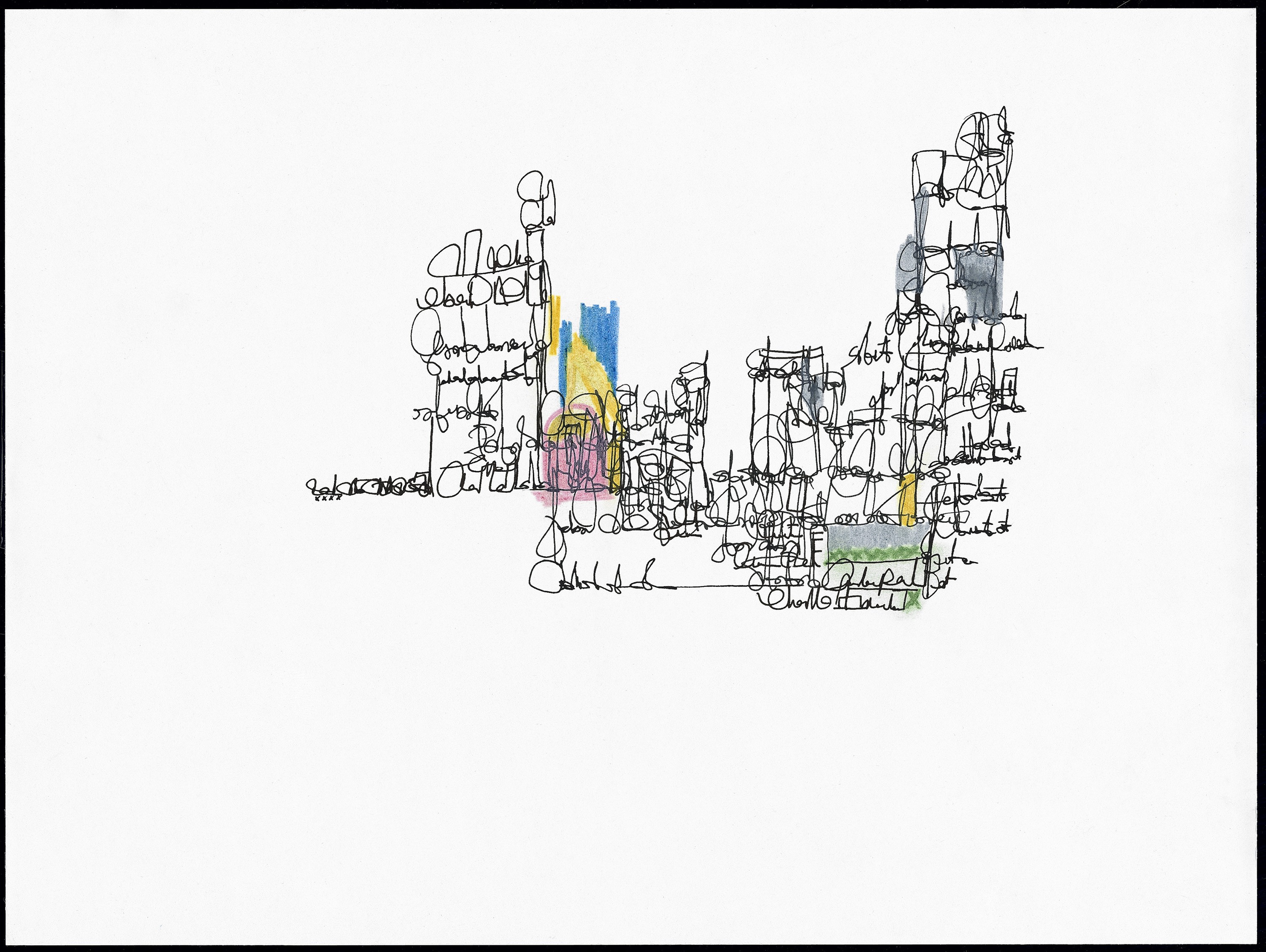 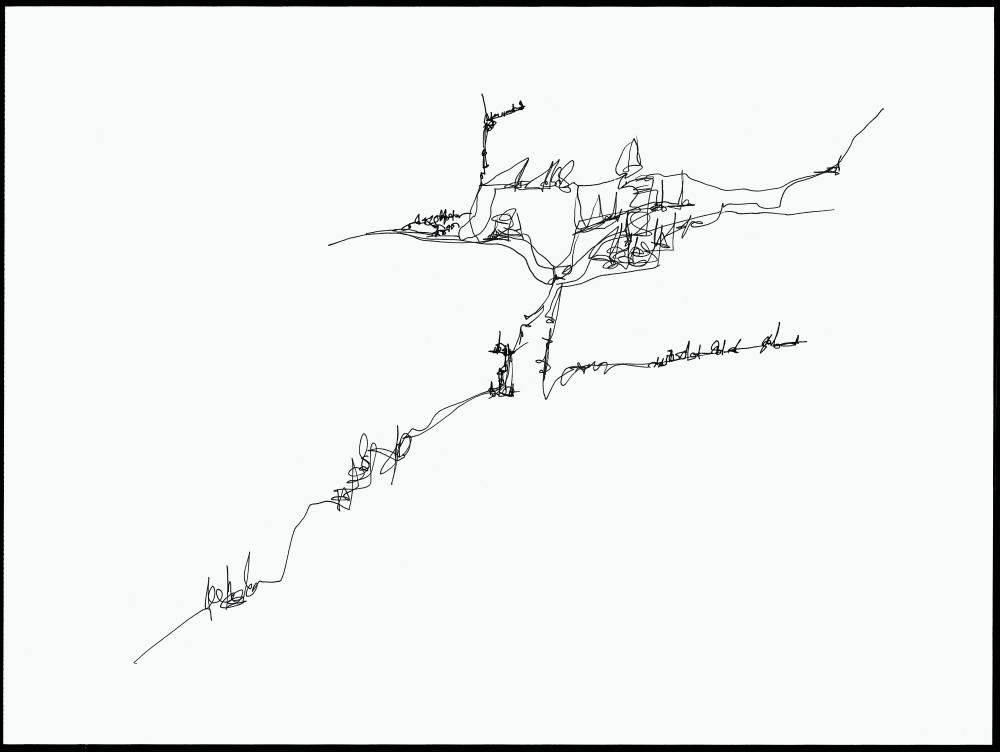 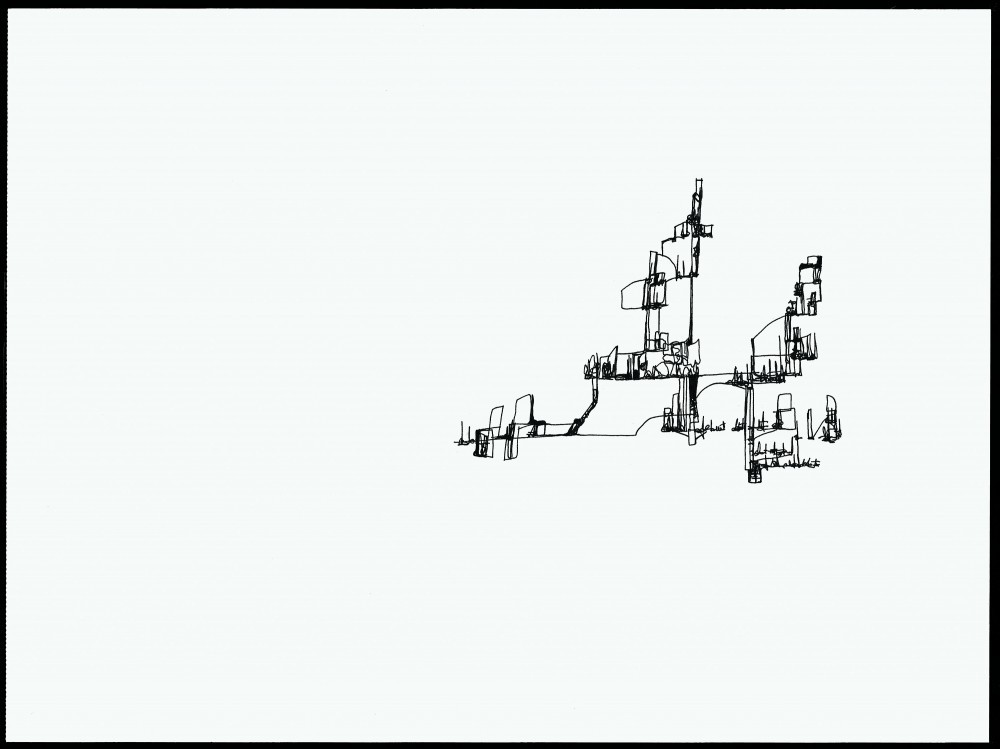 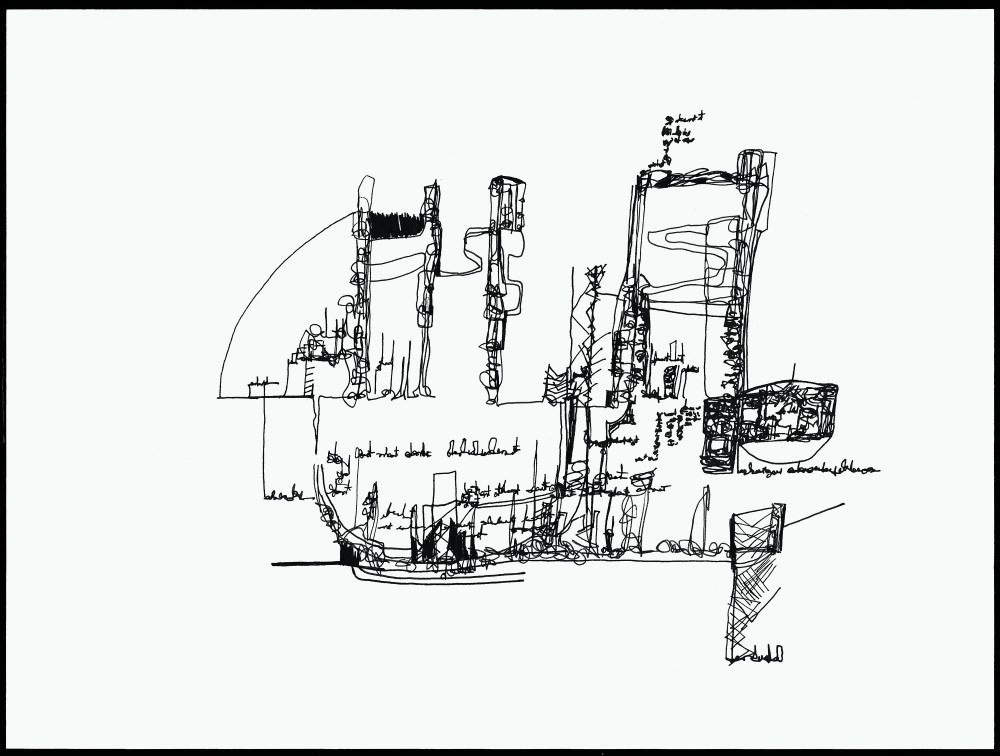 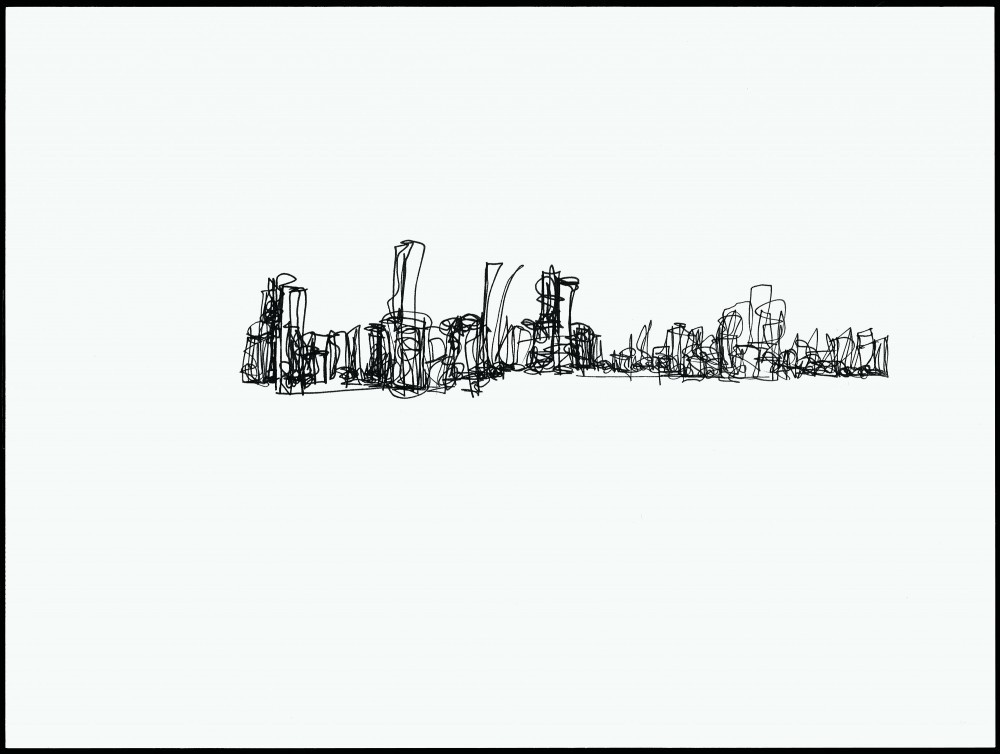 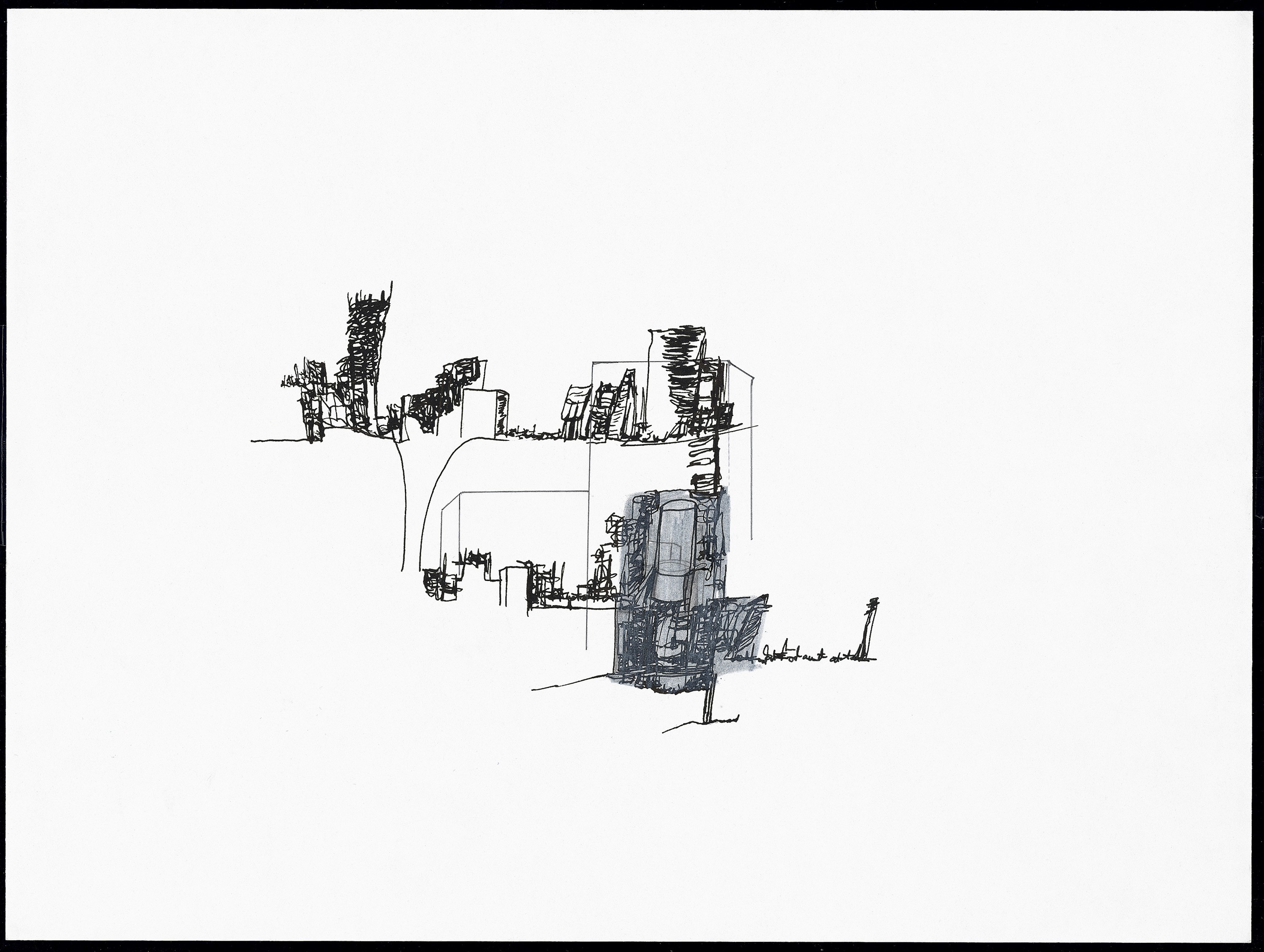 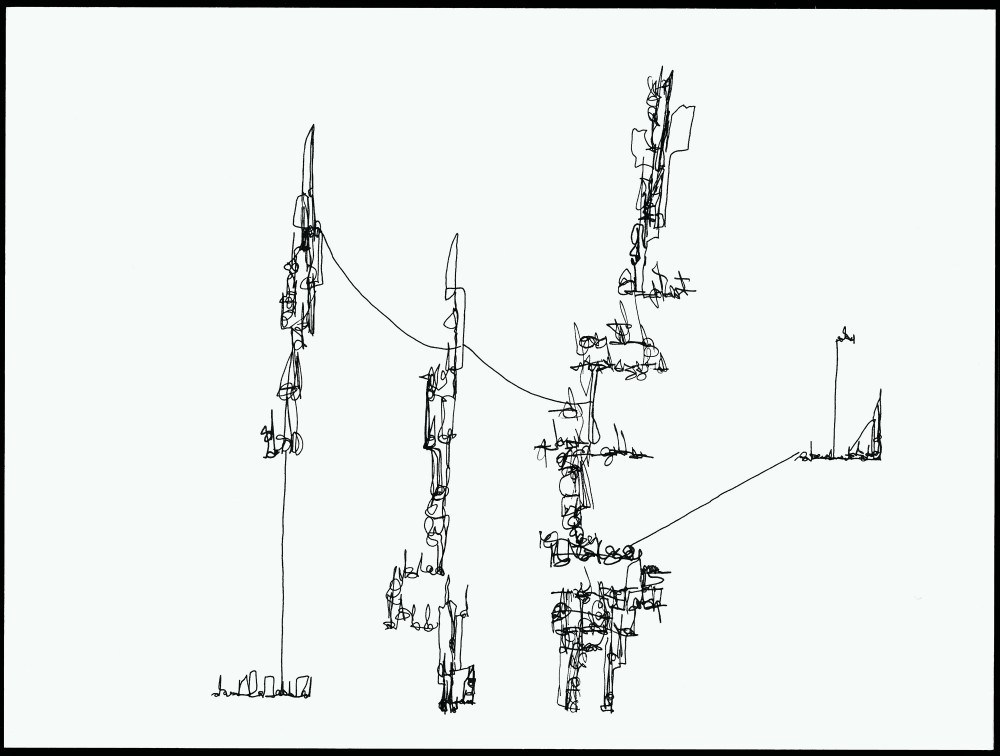 Renee Gladman is hard to pin down. The former Harvard Radcliffe fellow is usually described, all too simply, as a writer in “experimental prose.” Her literary investigations range from fiction — including her Ravicka series (which chronicles a mysterious city with a yellow sky) — to personal essay, such as the 2016 “Calamities,” and even books of poetry and visual art. She has also edited for the notable poetry and experimental prose press Leon Works, as well as the Leroy chapbook series and taught writing and literature at various universities. In Gladman’s novel The Event Factory, the first of the Ravicka series, the narrator is caught thinking: “Architecture again, it always comes to that.” This refrain might also be true for Gladman herself, whose work so often explores the relationship between narrative and architecture and what it means to live through both. Most recently this architectural interest has taken the form of “prose architectures” — proto-linguistic drawings in the contours of buildings and cities. The drawings have been exhibited at We Buy Gold in Brooklyn and Poet’s House in New York, and have been collected in her most recent publication Prose Architectures.

What keeps you returning to architecture?
I’ve talked about architecture for a long time. I feel like it emerged out of questions I used to have — or answers I used to find — in the city. I used to want to write about the city all the time and a lot of my books take place in cities. Then I used to talk about the sentence as a city, as a space to move through where you encounter punctuation like derailments or signs. It just got to be more abstract. I realized that, because my lexicon in drawing is these simple lines that become cityscapes or building structures, I could draw towards this notion of architecture that I was really interested in. The drawing speaks to this kind of confluence of ideas, where architecture is now a kind of paragraph or a kind of drawn shape that’s full of language or full of the suggestion of language.

The movement of the line is really literal in Prose Architectures because you’re drawing it out physically, but also architecture and the city are things we come to understand through movement or embodiment; they sort of necessarily figure the body in some way. How do the body and movement enter or inhabit or fail to inhabit your spaces?
The body and movement are always at the center of anything I’m thinking. Because we manifest ourselves through the body; the body is the way we negotiate the physical world. It feels like it’s always implicated in whatever we do or think, so it’s almost too hard for me to unpeel the body from language. I think of the body as a really great vessel for thinking about experience and I like that I can put the body next to the paragraph or the sentence. They feel to me like similar kinds of containers, where experience or memory passes through as a way for events to manifest in the world. Both of them are very complicated containers and so everything is in motion. Even when it seems to be still. We enter our body into a space and I like the idea of the fact of the objects in the space or even the energy in that space changing because of the arrival of the body and acting on that body. This kind of energetic exchange affects, to me, language or how language comes out or how language articulates the experience. They seem to be caught up in the environment of living: the writing, the moving, the inhabiting of the body, as part of the system.

Is there a way that being in a body and the conditions of that body impact how you think about writing?
That’s where body questions get interesting to me. I know that a lot of people do work on the body and they’re talking about this body that might be injured or might be disabled or might be queer or might be marked in these particular ways and I think that that stuff is in there, but I don’t know how aware or how I’m engaged with that at this moment. My hands hurt, and I feel like if you ask me in twenty years after my hands have been hurting for twenty years, I probably will have a different response to that. But the body is the container for our consciousness and I am more perplexed and engaged by how that is even possible and where the consciousness is in the body — where the thinking, where the desire to draw or look at someone or be with someone, where all those things are. That’s kind of the body I think more about than that sort of tactile body. And then in some ways that’s also not true because I am often writing a body that is in need of things. Usually it’s coffee or company or something like that.

One of the things you just hinted at is that the body is, in part, being with other people. To my mind a lot of architecture, or the entire idea of the city, is about being with other people, as well. Are you thinking beyond writing about or moving through spaces as an individual to thinking about spaces that are inhabited by multiple people or by communities?
Yes, and how the city moves bodies through itself and how we enter spaces, who enters certain spaces and who stays outside of those spaces. It’s really interesting thinking about it now because I’m living in this barn in this small town and it’s very unlike living in a city. It’s very isolating. I haven’t seen a person in three days. And that’s a totally different way of being that doesn’t actually make that much sense to me in terms of writing the kind of city writing I like to do. But I also love the way that buildings are — they’re these huge structures that we have accepted as the places we go in to get what we need, or to sleep, or to work, or whatever. They’re also these huge towering structures. I think of them as if they’re creatures; they’re other kinds of beings. Sometimes we don’t even touch them. I’m interested in figuring out how to activate the spaces between our shorter, smaller vertical structures and these much larger vertical structures. They all seem to have a kind of breath in them, and I like to think about how buildings breathe in relation to how human beings breathe.

Drawings by Renee Gladman, taken from the book Prose Architectures. Republished with permission of the artist and Wave Books.