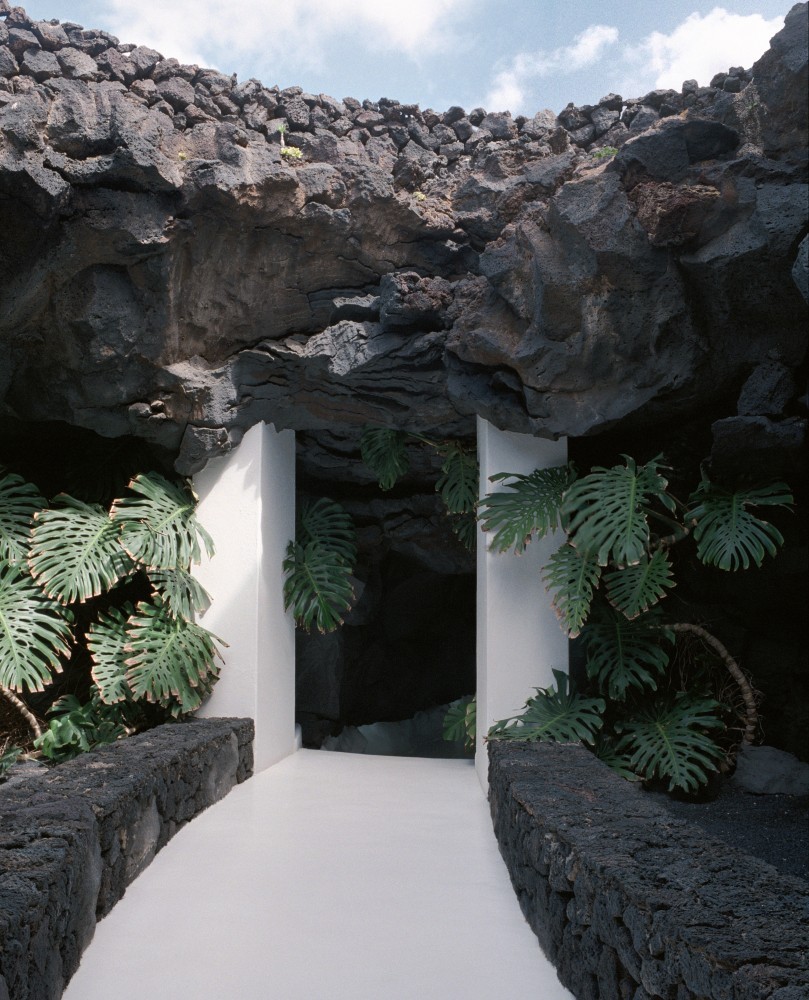 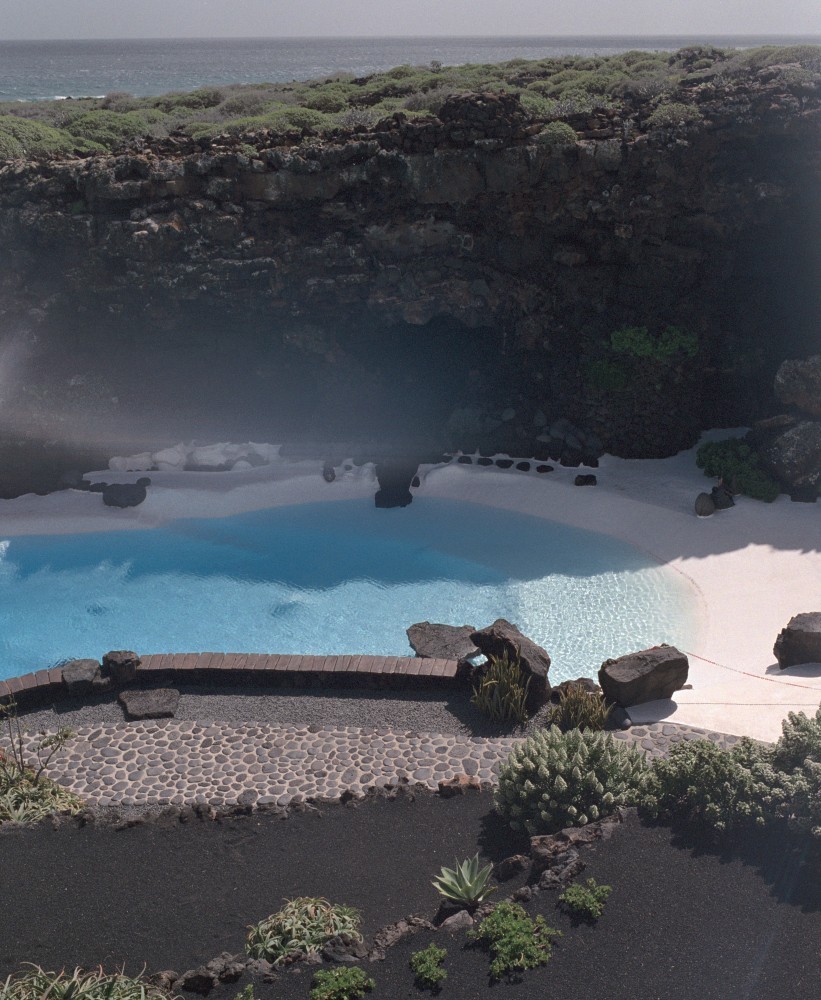 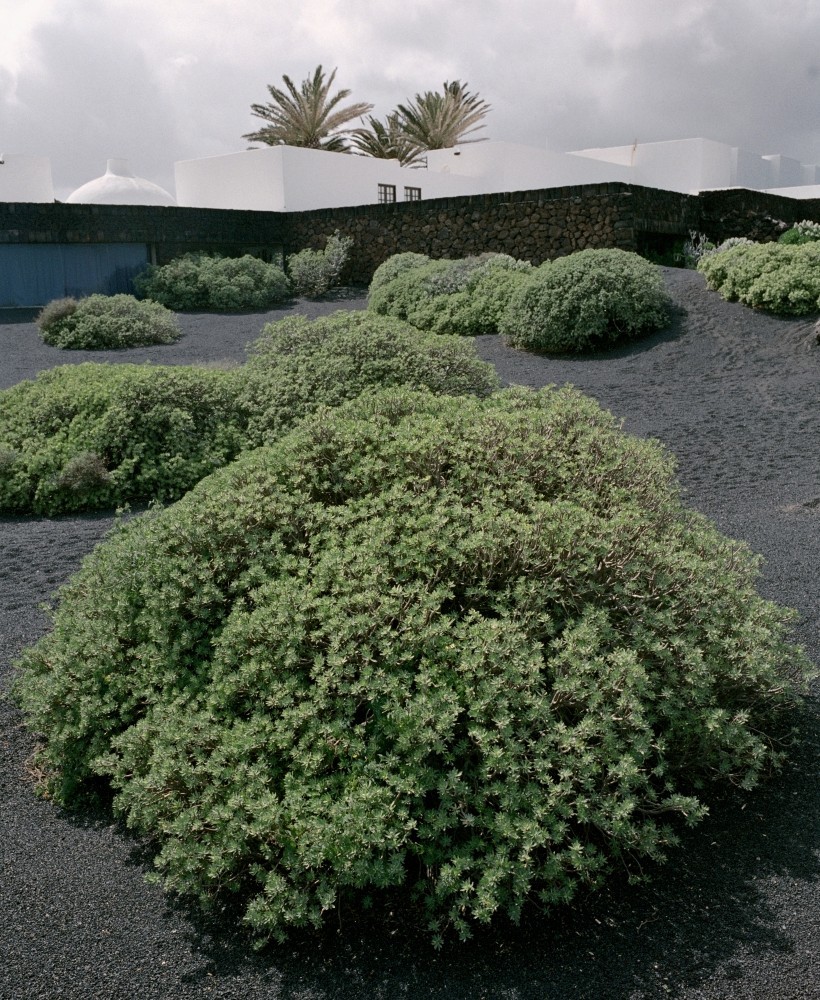 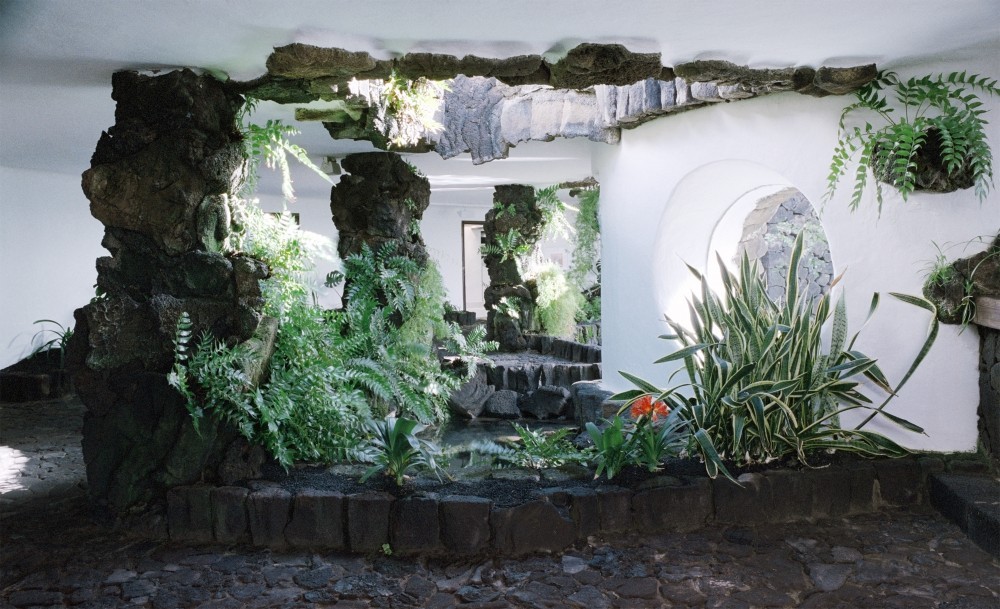 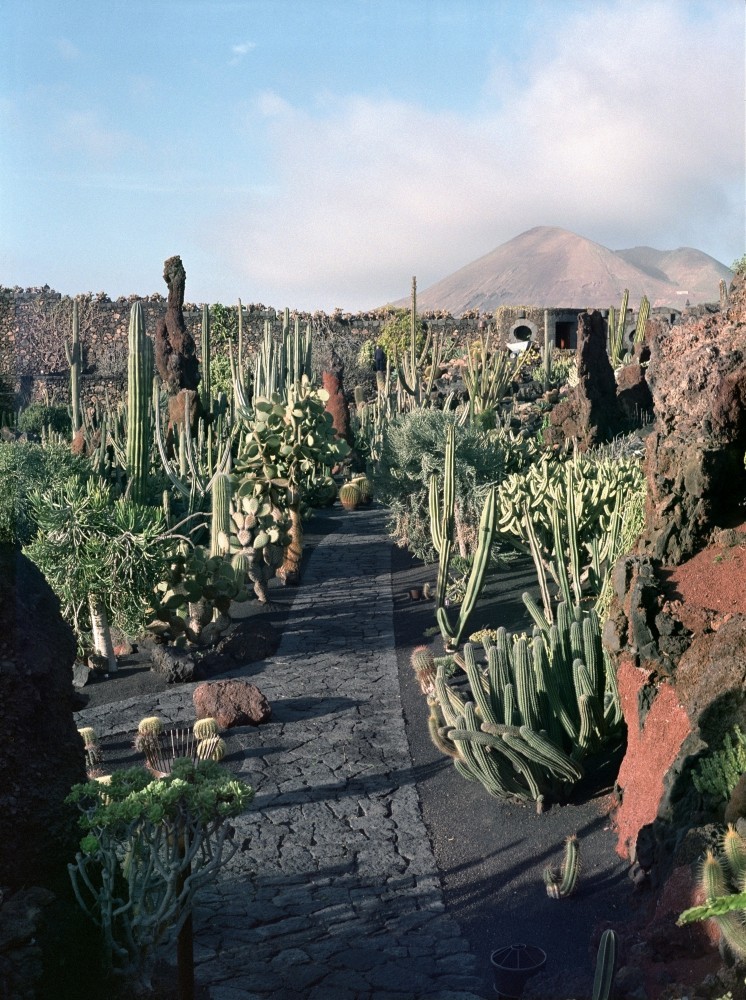 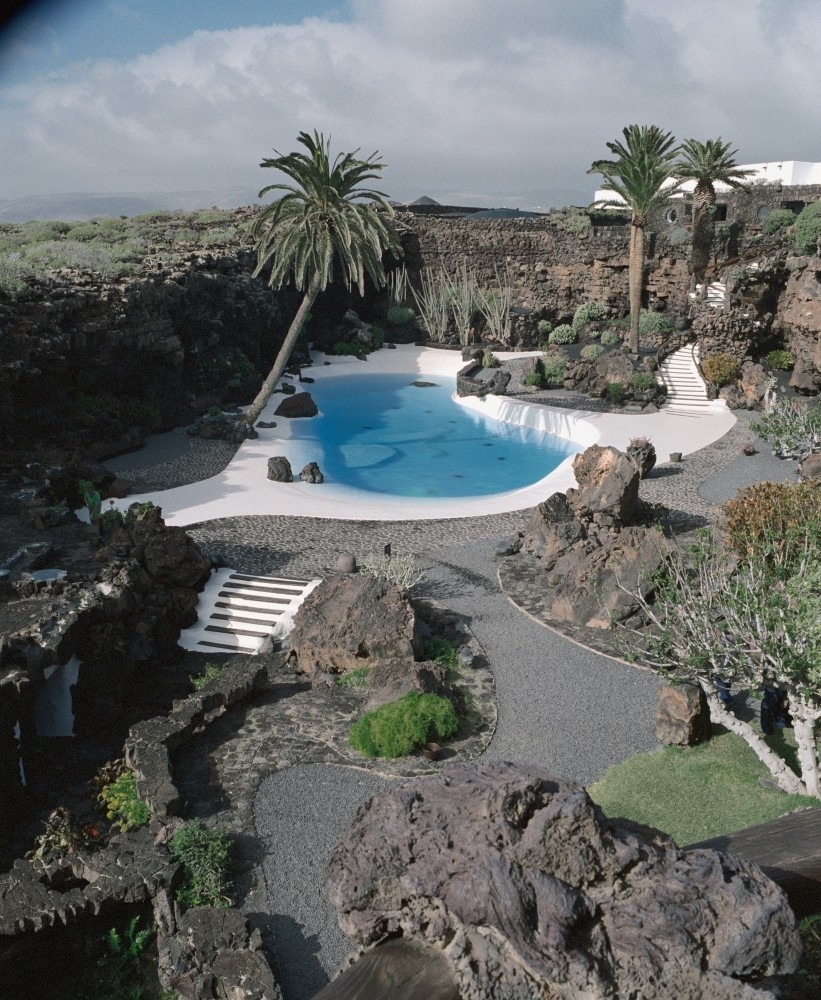 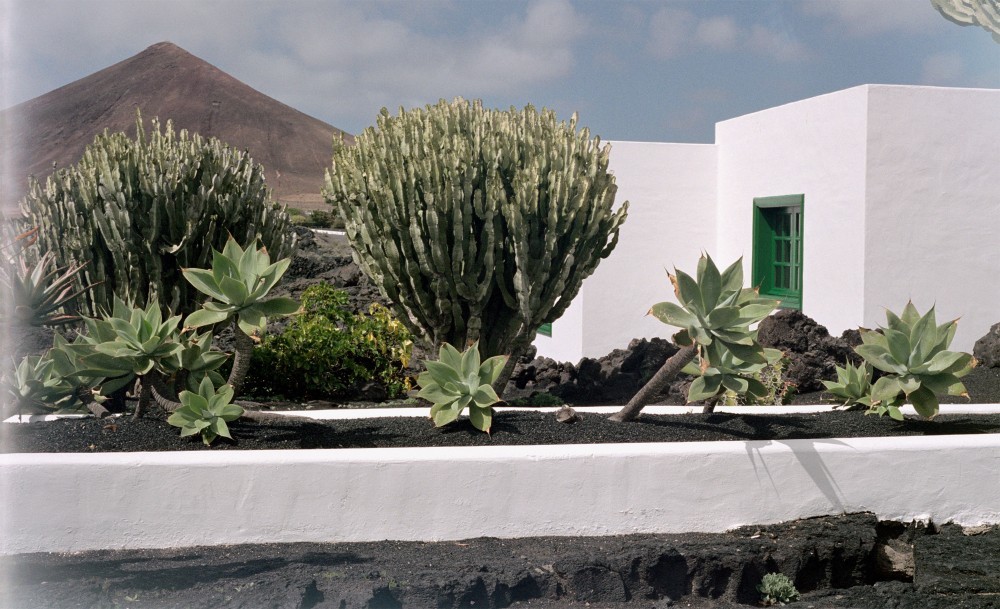 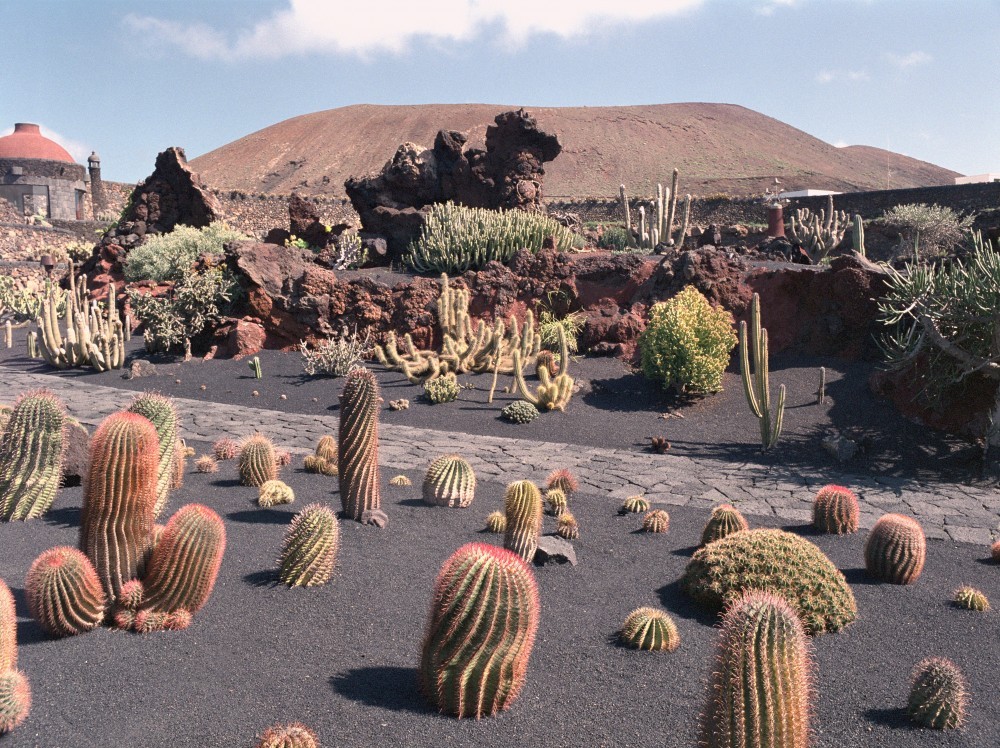 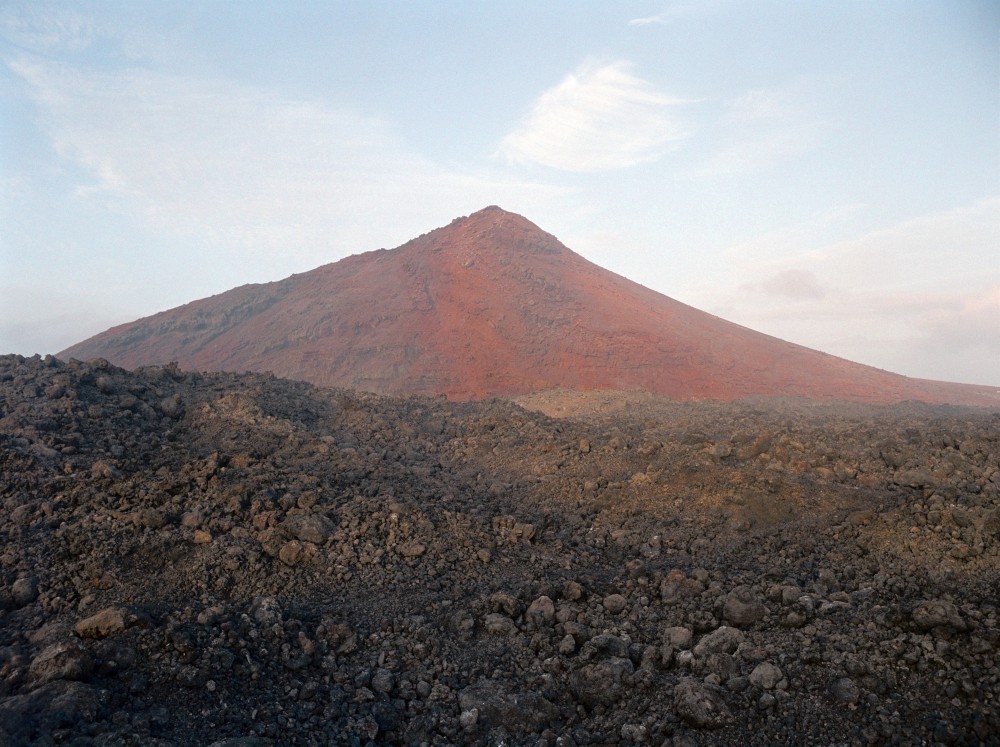 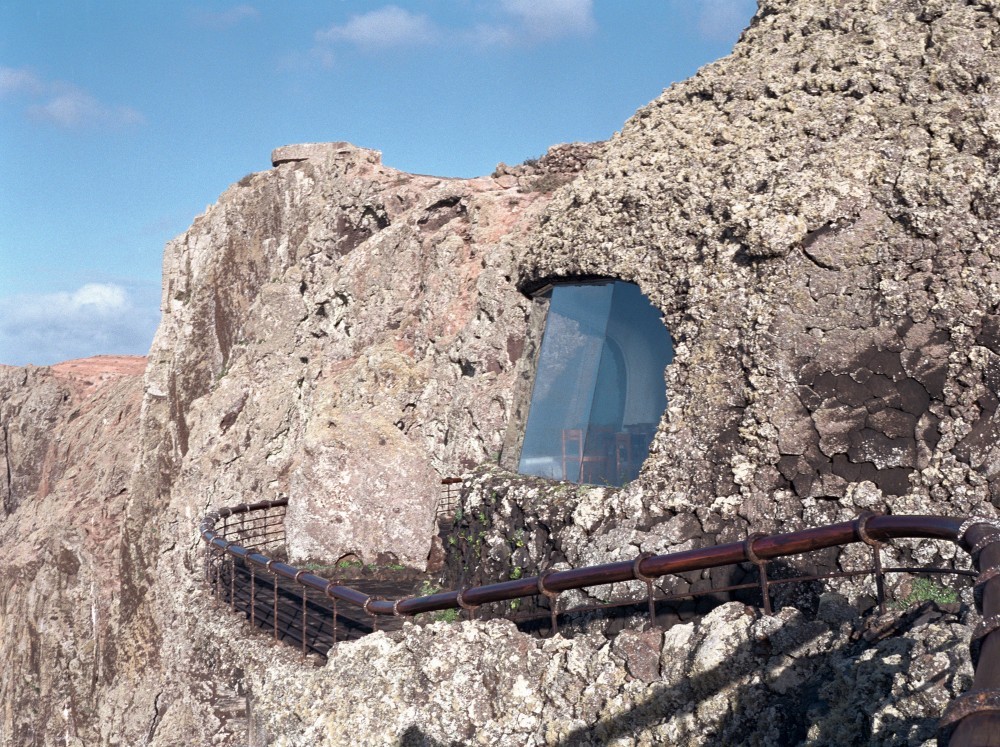 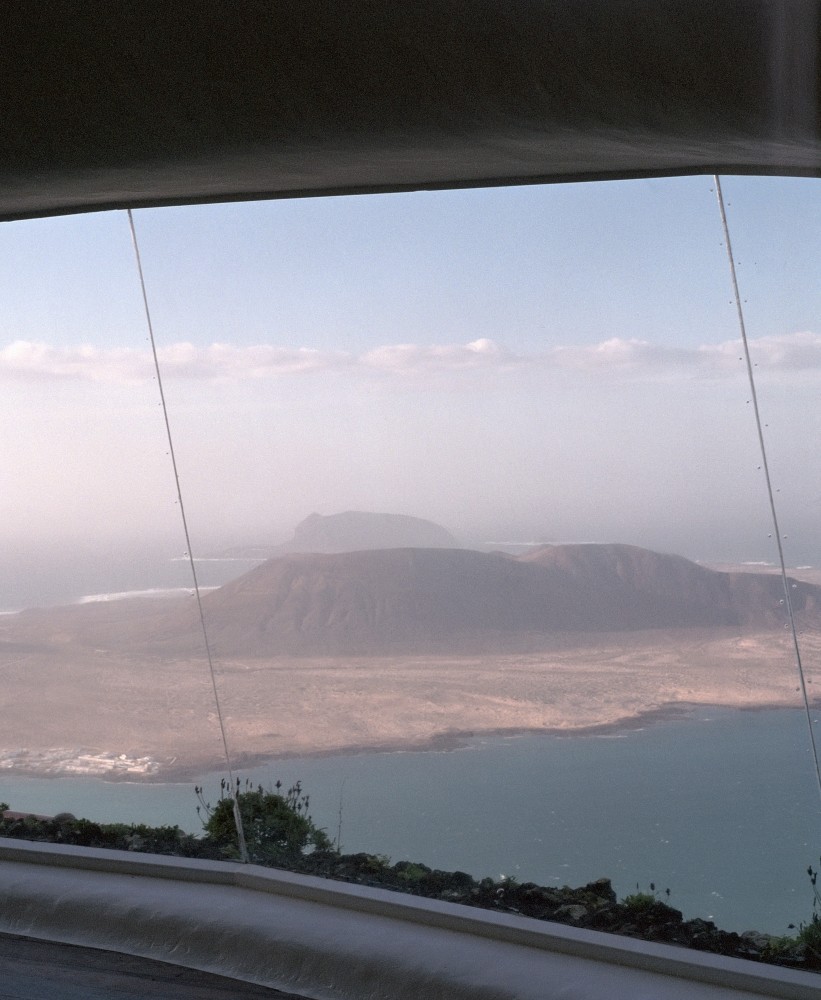 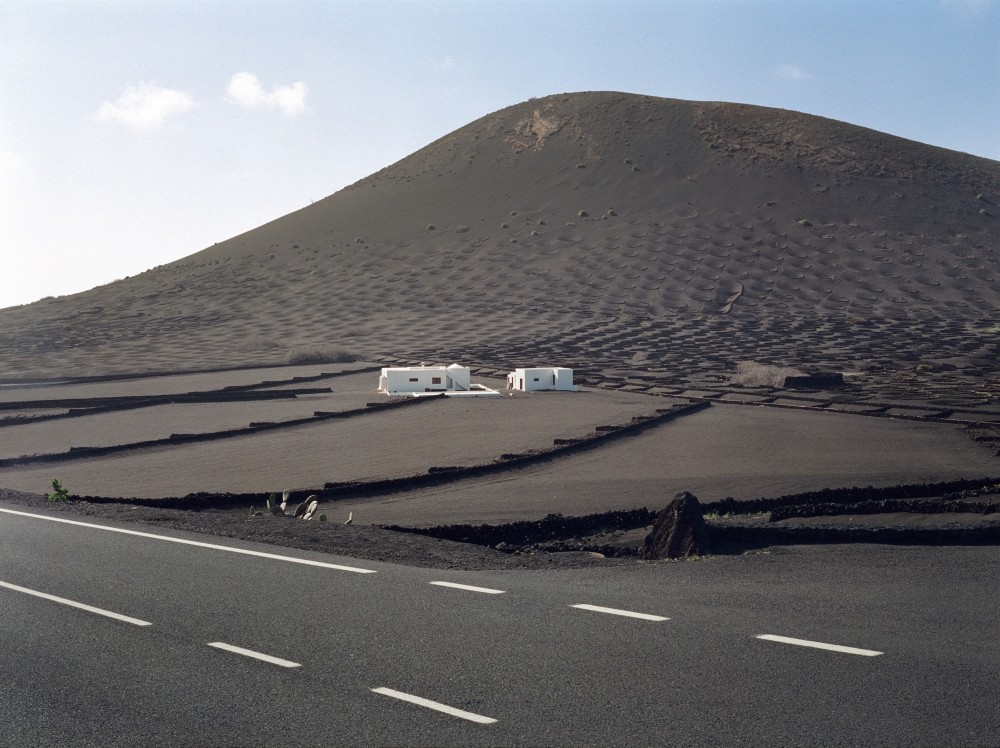 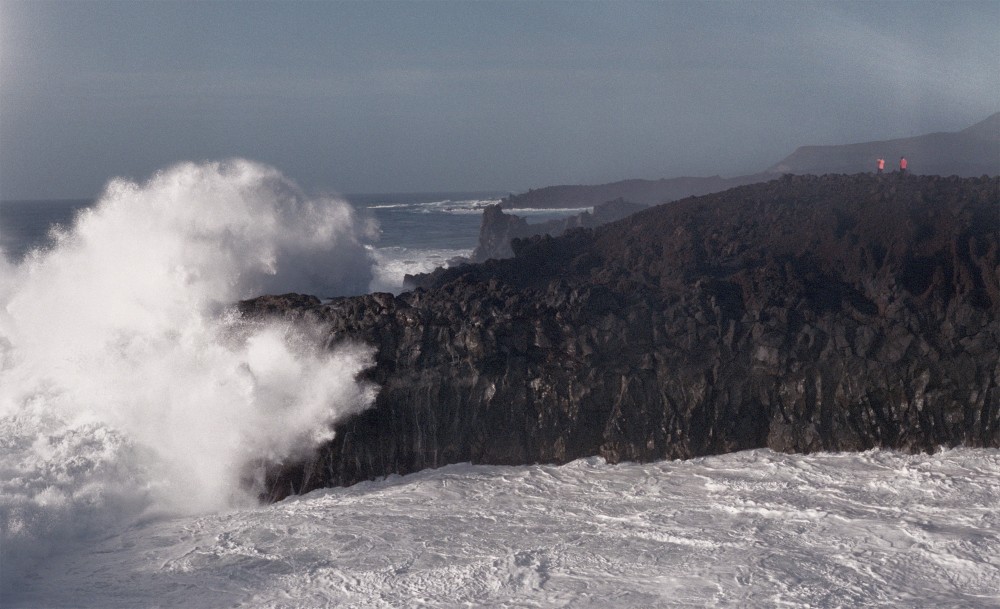 THE MIND-BOGGLING ARCHITECTURE AND LANDSCAPES OF LANZAROTE, PHOTOGRAPHED BY PHILIPPE JARRIGEON

“If it is no match for Corfu or Ibiza in the crazy techno afternoons holiday sector, neither is Lanzarote in a position to offer ecotourism — for obvious reasons.”

Besides camel trips, rap video clips playing in lonely hotel rooms, recurring blowjobs, and suntan lotion, Michel Houellebecq points out a few landmarks not to be missed on the Spanish island of Lanzarote in his satirical and disillusioned novel of the same name. Among them are the Jardín de Cactus in Guatiza and Timanfaya National Park, home to the Restaurante El Diablo with its “Vulkan Grill,” where Houllebecq sets a hilarious scene involving volcanic cooking. Both the cactus garden and the volcanic restaurant have something in common besides the ironic admiration professed by Houellebecq’s narrator: they were designed by the same man, César Manrique, who was born in Lanzarote in 1919, and died on the island in 1992.

In one thing Houellebecq is right: it is difficult to detach Manrique and his oeuvre from Lanzarote’s most iconic highlights, just as it’s hard to pigeonhole this eclectic figure — architect, artist, ecologist — who produced equally unclassifiable architecture, often built without plans or drawings. But despite his extreme attachment to Lanzarote, or maybe because of its constrictive effect on his unfettered attitude towards life and art, Manrique left at an early age. First as a teenager to fight in the Spanish Civil War — one of the darker episodes of his life — and again in 1945, when he moved to Madrid to study fine art. During his almost 20 years in the Spanish capital, where he consolidated his artistic career, Manrique got to know one of the most inspiring and hedonistic Iberian architects of the second half of the 20th century, Fernando Higueras. Higueras, who built a house for the artist in the environs of Madrid, had a free but consistent approach to tradition that clearly influenced Manrique. Manrique’s house would be the trigger for a series of collaborations between the two men in Lanzarote, such as an unrealized project for the Mirador del Río (Manrique would design an alternative scheme that was built in 1973) or the Hotel de las Salinas (1973–77), where Manrique worked on the gardens and outdoor spaces.

Manrique left Madrid in 1964 for New York, where he lived for two years, before deciding to return to Lanzarote for good in 1966. His formative years outside the island had been decisive. Consciously or not, he was coming home precisely at the point when the island was beginning its transformation from a largely uninhabited volcanic wilderness to the overcrowded mass-tourism destination depicted by Houellebecq. Once back, and undoubtedly influenced by Lanzarote’s unique landscape, Manrique continued to paint but also to produce sculptural and architectural work. Half land art, half tourist facilities, his new landscapes reflected his obsession — also found in his books — with respectful, ecological development of the island. Moreover, following in the wake of Bernard Rudofsky, Aris Konstantinidis and others, he recorded the traditional architecture of his birthplace in the book Lanzarote, arquitectura inédita (1974), a key reference to understanding many of his own architectonic solutions. Manrique’s beautiful photographs record many facets of local architecture, both generic and particular, such as striking “Byzantine” chimneys that he himself copy-pasted for his first home. But these references aren’t enough to understand his oeuvre: we should include some of the Pop and land art he must have discovered while living in the U.S., which we can recognize in his follies for the Parque Marítimo in the neighboring island of Tenerife (1991–95), among many others.

As he described in another of his books (also titled Lanzarote), Manrique felt that architecture should vanish in order to be respectful towards the landscape. And that is exactly what he did time and again — sinking, burying, excavating — in many of his architectural projects, just as peasants had traditionally done in the Geria area of Lanzarote, where vineyards are planted in sunken cones called socos to protect them from the harsh wind. Again he used natural holes in Jameos del Agua (1966–68) and of course in his famous house at Taro de Tahiche (1986), which now houses his eponymous foundation. These are both instances where Manrique was more than just an “architect”; he was a “discoverer” of a set of volcanic grottoes — formed by bubbles in the petrified lava — that would become part of his domestic and extremely personal world. At his house, for example, there are two levels: the uppermost comprises a traditional surface construction, while below are the caves, domesticated bubbles amidst the volcanic rock. These levels were originally connected by only a spiral staircase, which seemed to link the world of tradition — and its symbolic overlap of cultures — with a telluric world, inseparable from geology and topography. That superposition of layers constitutes a precise and metaphorical image of the complexity and richness of César Manrique himself.

Text by Guillermo López and Anna Puigjaner of MAIO Architects.