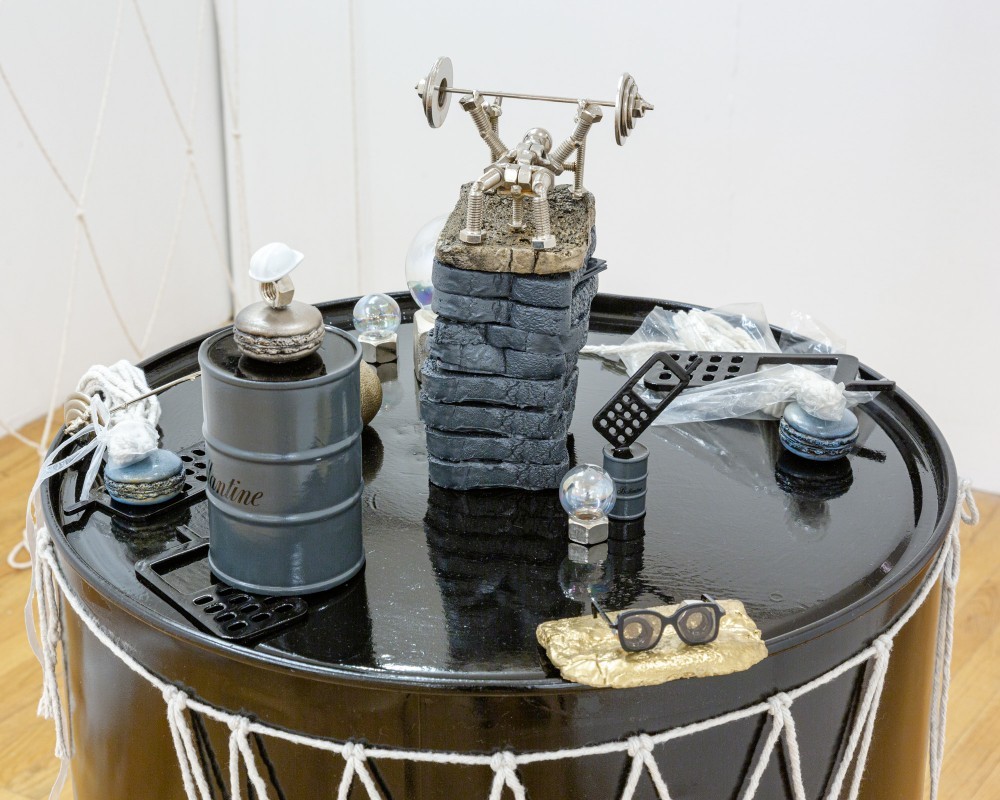 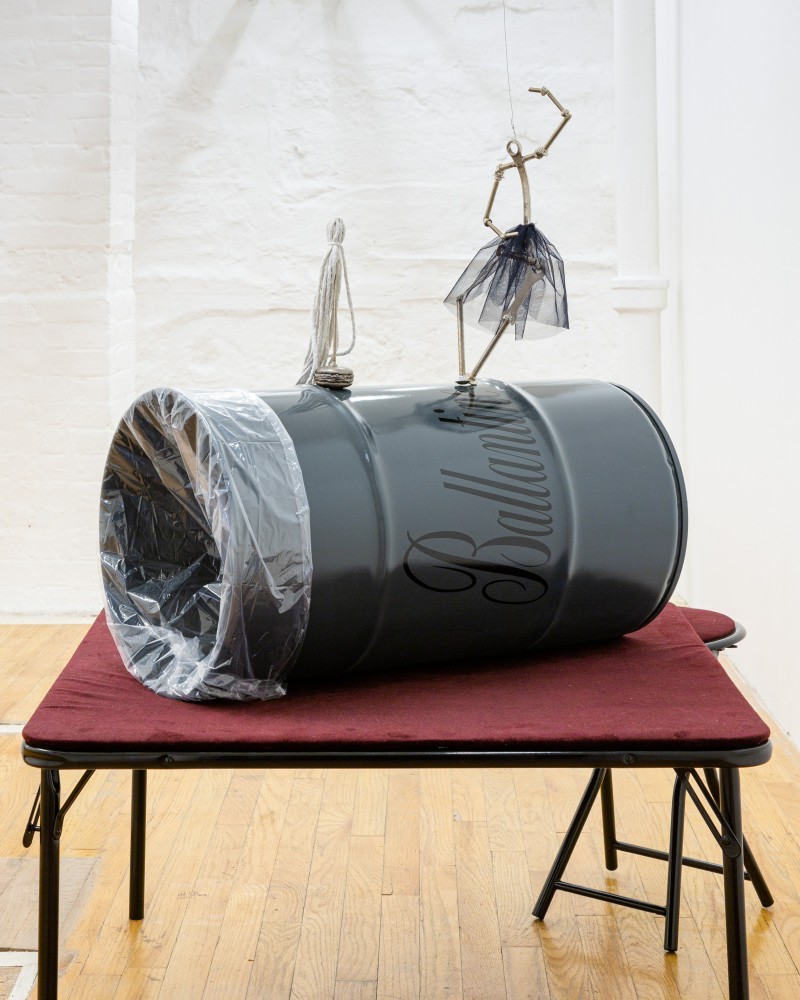 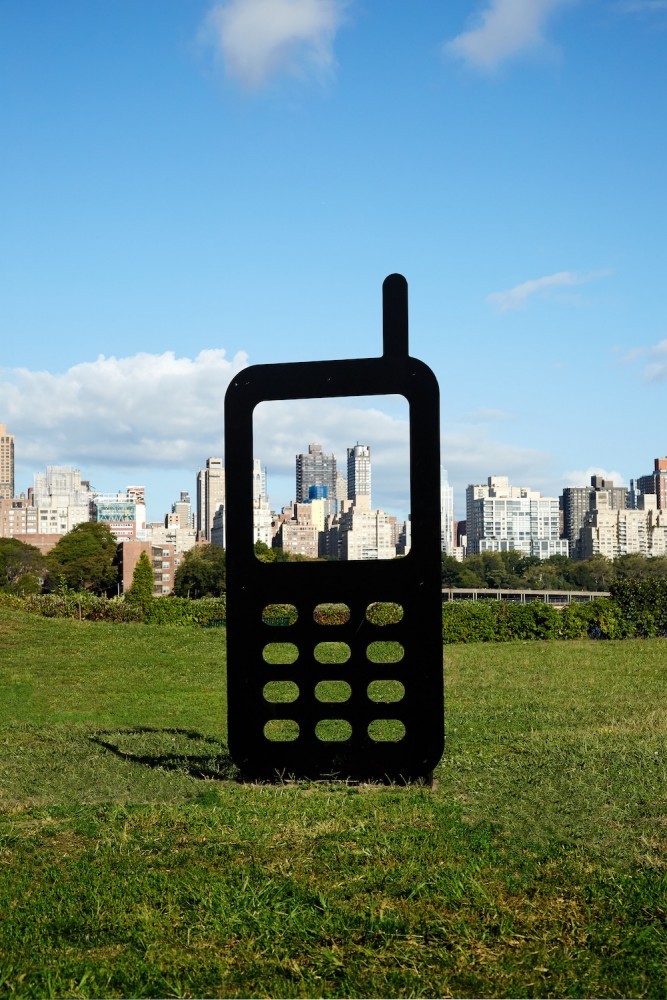 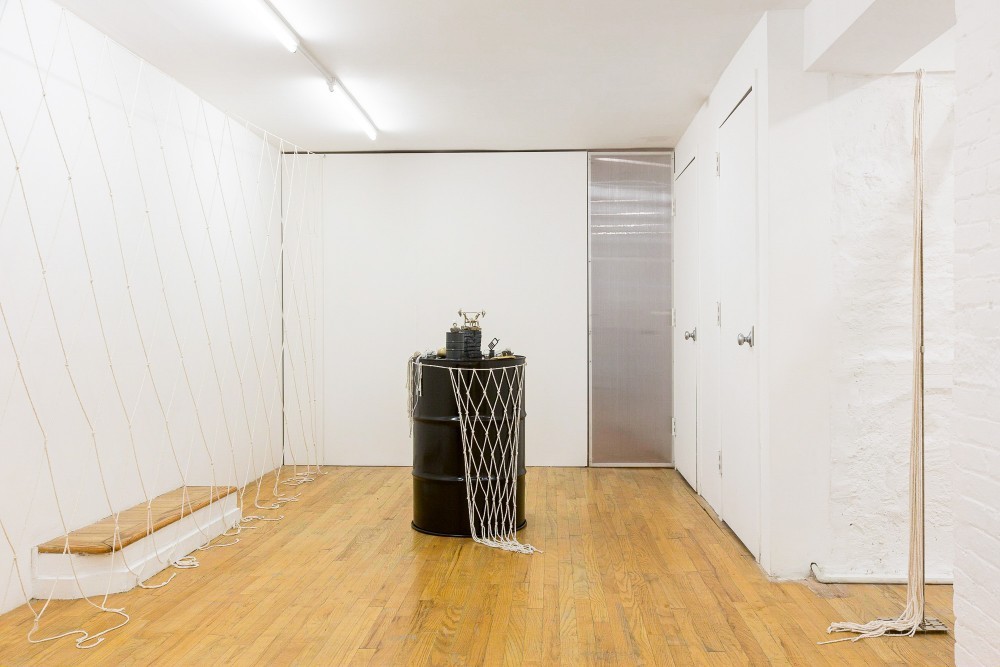 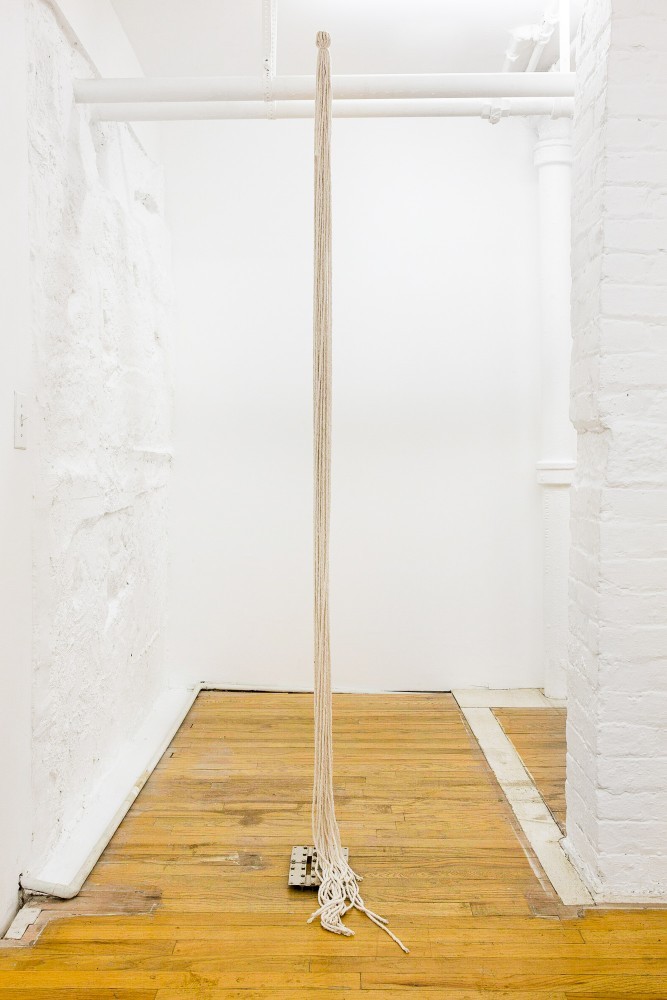 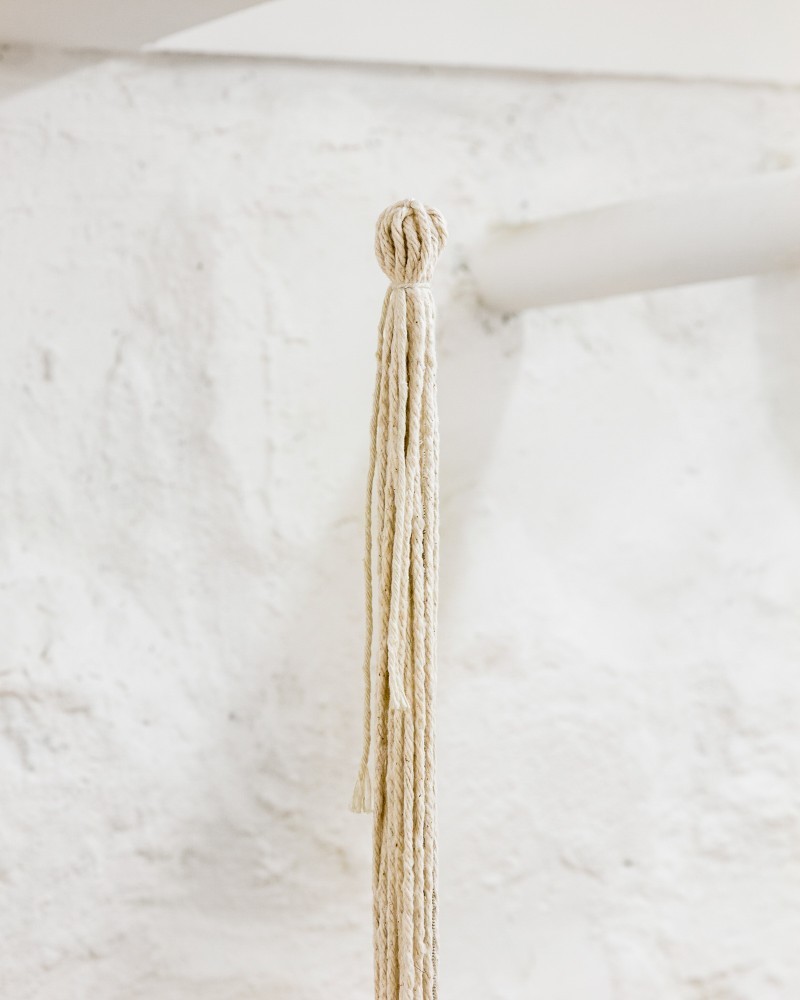 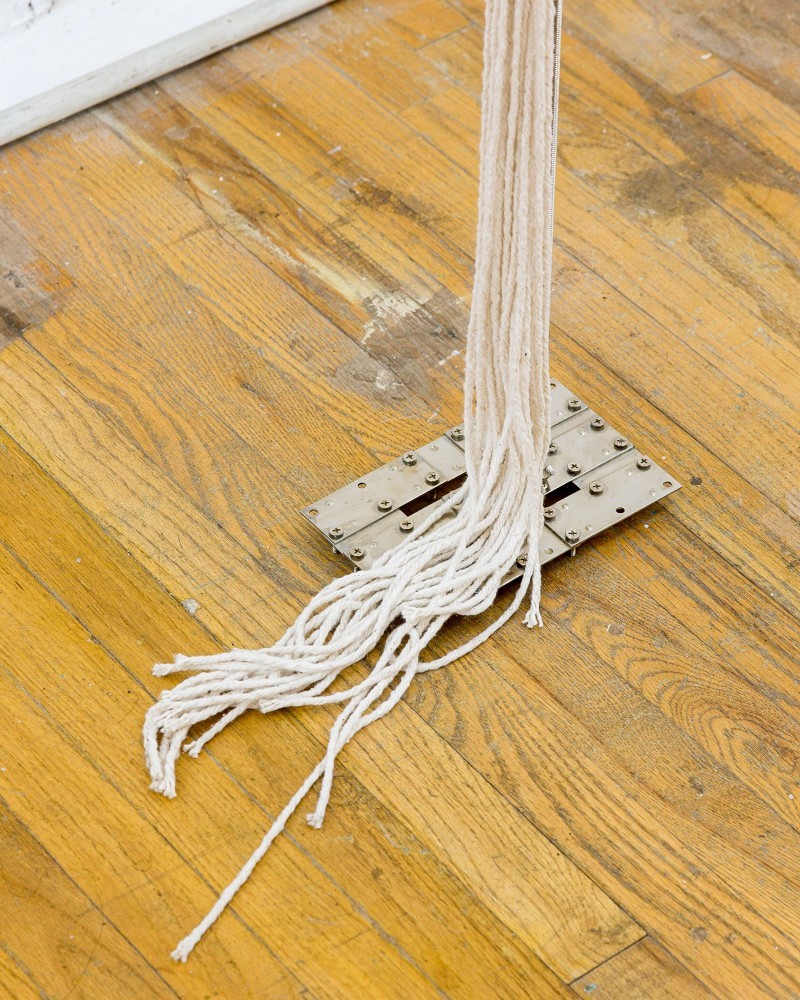 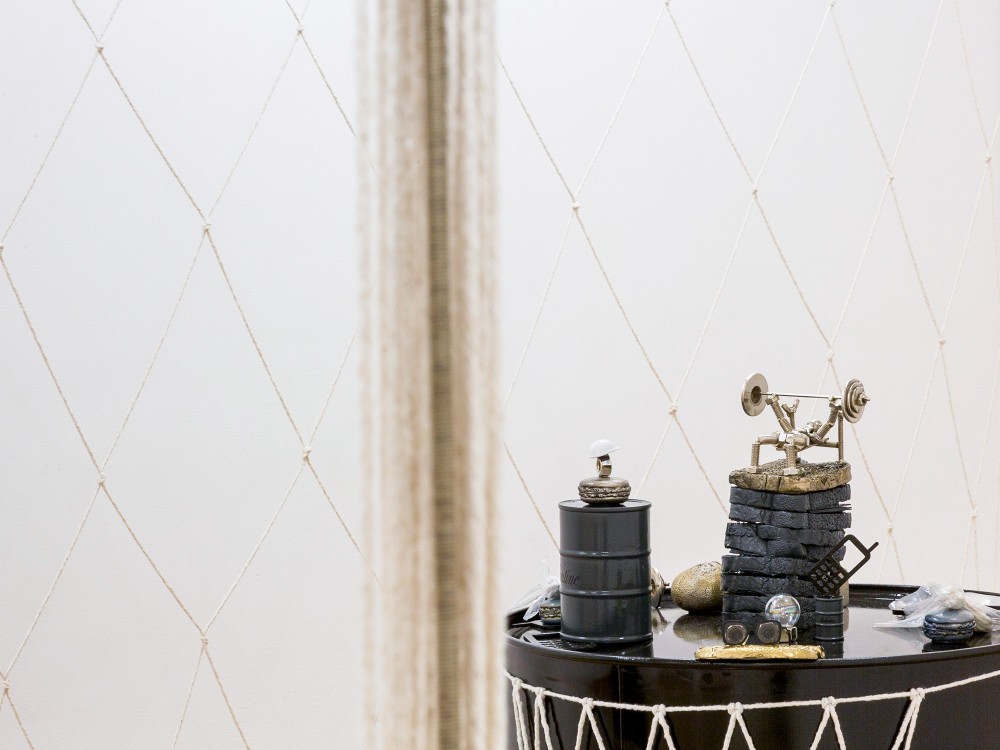 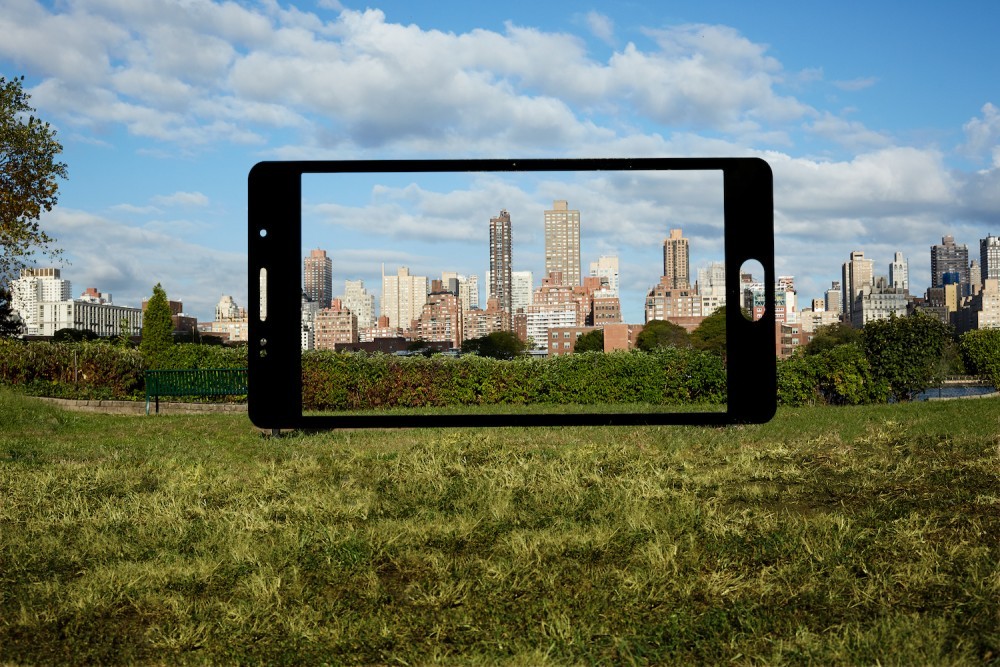 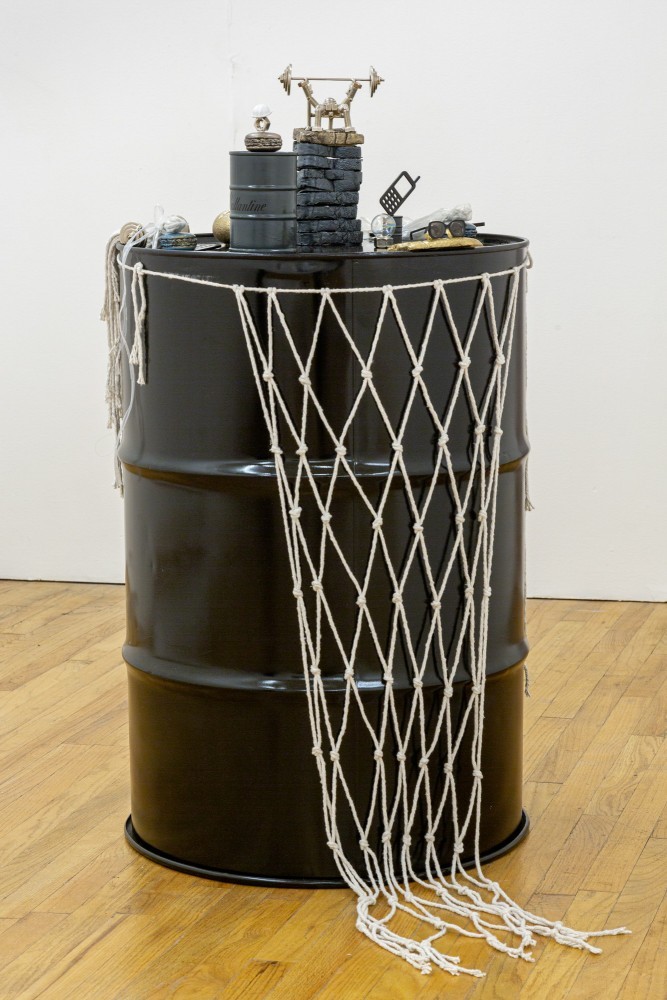 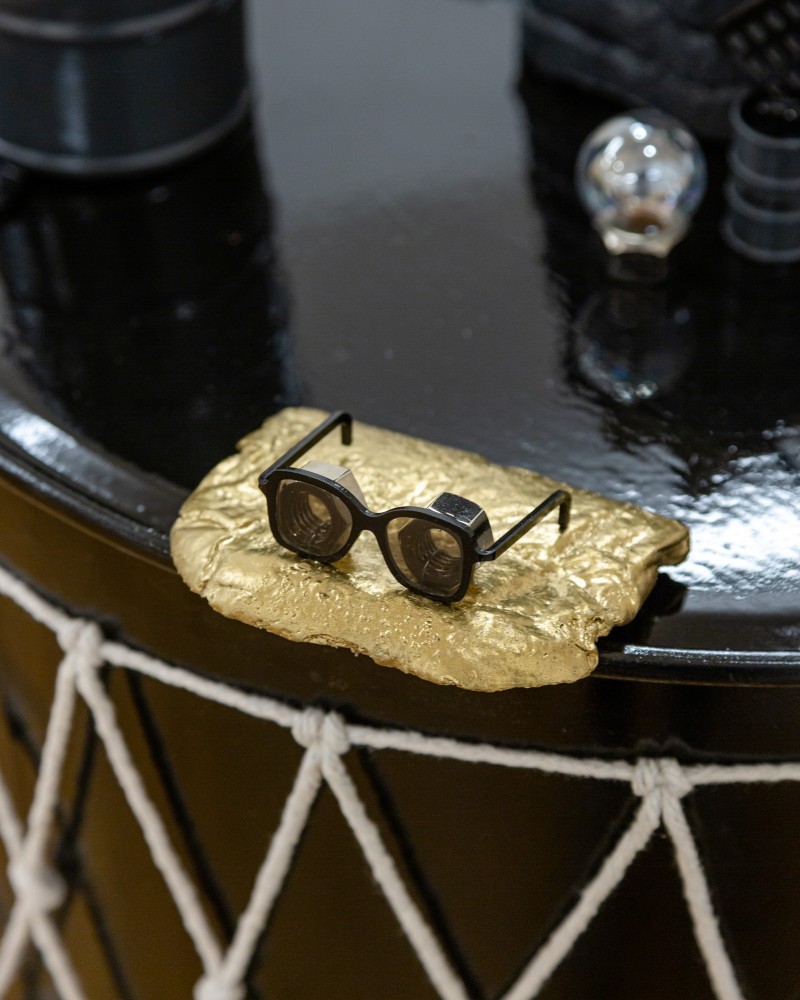 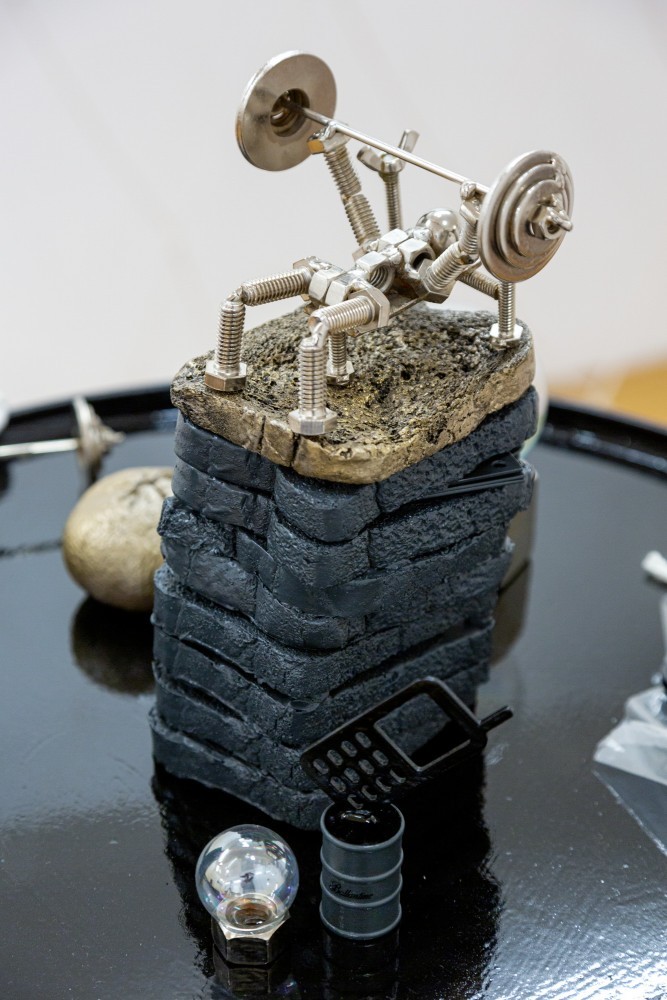 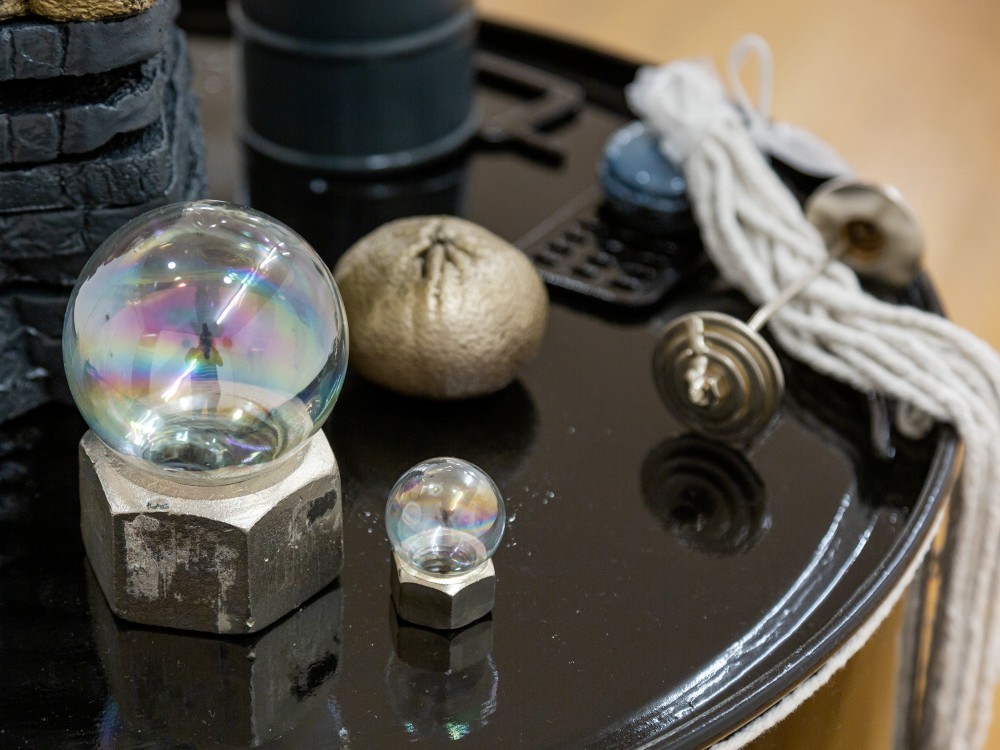 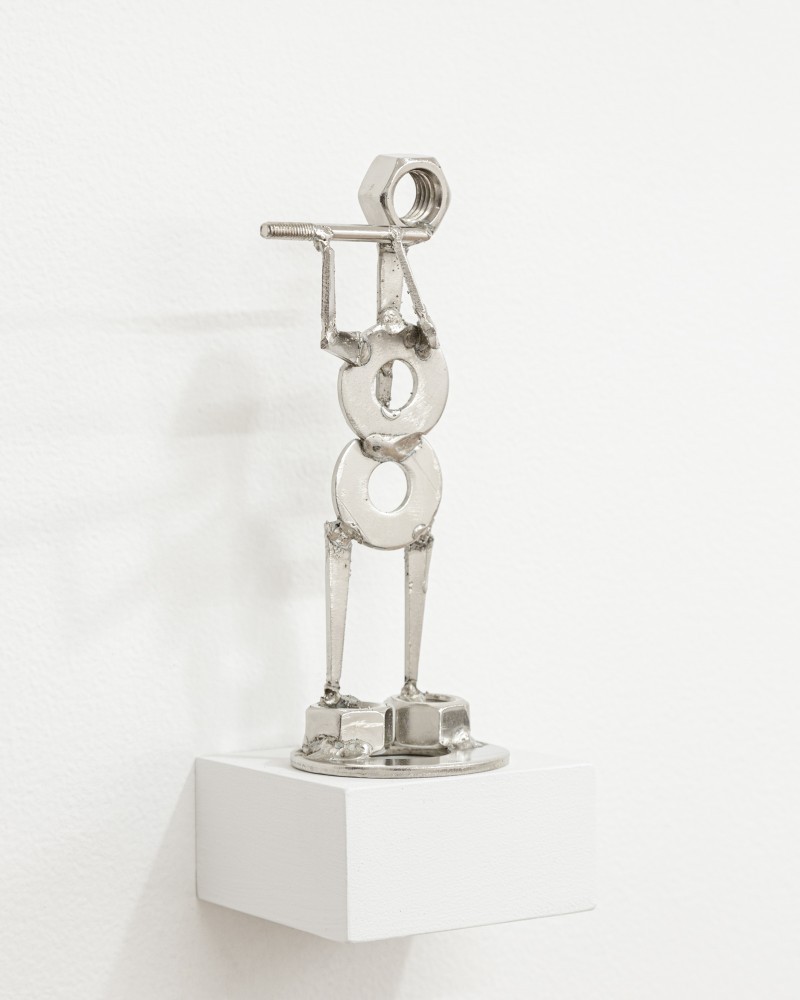 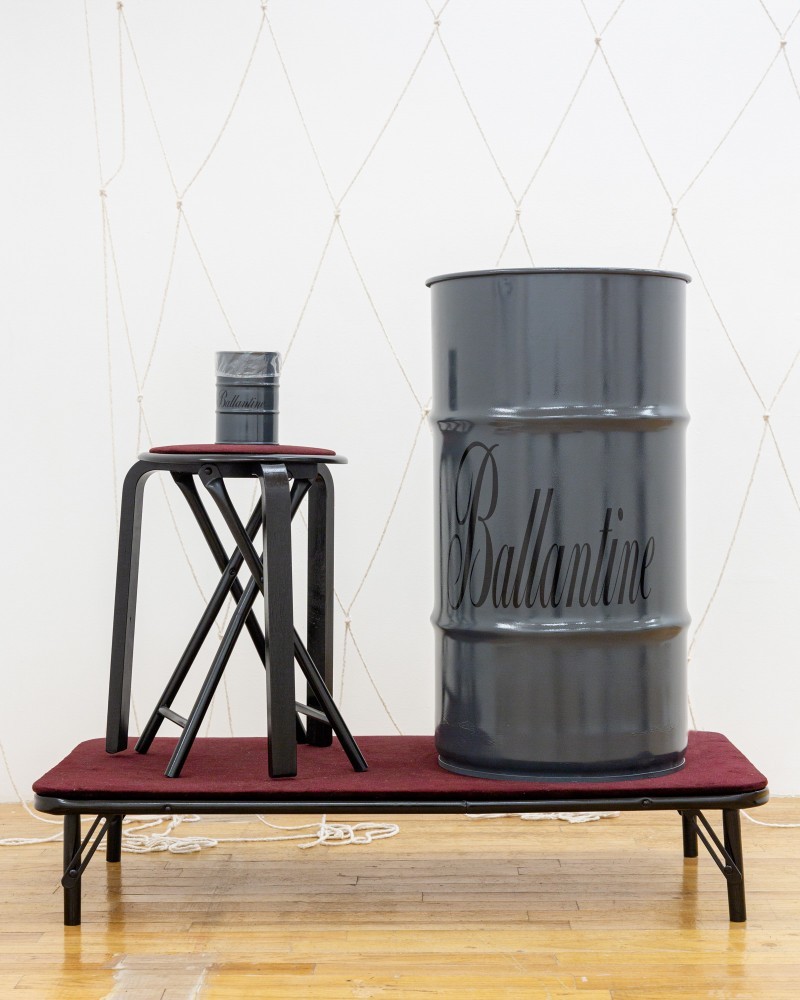 To desire is to despair, wrote psychoanalyst Adam Phillips. In Paul Kopkau’s new work, at New York City’s 321 Gallery in Brooklyn and Socrates Sculpture Park in Queens, the artist suggests that consumerist yearning is itself a spasm of grief, one produced by the exploitative systems of production that undergird everyday experience.

At 321, assemblages of oil barrels and velvet-lined IKEA knockoffs of Modernist furniture feature tableaux of mop dolls — a popular “country craft” from the Midwest — and chromed lug-nut figures (some hold orchestra instruments, one lifts weights, another is a ballerina). In one work, Service Entrance, the figures appear on top of a barrel next to stacks of resin-cast brioche, macaroons, and a gilded tangerine. Not quite stand-ins for the typical consumer, these figures, made from everyday materials (most of them found in any hardware store), wobble between participation and observation. Eerily out-of-place, they teeter about the sculptures, unsure how exactly they might fit in among the furniture and barrels but seemingly hoping to belong all the same. Don’t we all.

The thin metal outline of an early-2000s Nokia phone rests at the edge of Service Entrance, whose oil barrel (like all the others in the show) is labelled, in a nod to Jasper Johns, with the logo of Ballantine’s, one of the world’s most popular whiskies. At the same time in Socrates Sculpture Park in Queens, Kopkau has installed an enormous, flattened outline of the same phone — the piece is titled Yard Shadow: Nokia — with the result that one of the most recognizable objects in the world now forms a window looking toward Midtown Manhattan. For those of us born in the 1970s and 80s, our first cellphone was a sort of initiation into this century, a ticket to the present. Now they are our primary access points for bank accounts, social media, online stores, and even our sex lives; they signal to others, via photographs and status updates, where we are and how we are feeling; they combine, in their tiny rare-earth-metal hearts, our desire and our despair.

In the early 1940s, while observing the totalizing effects of the culture industry, Theodor Adorno famously wrote that “something is provided for all so that none may escape.” Differences between objects matter only insofar as they allow for further classification and fetishization among consumers. Kopkau, in flattening the phone into a giant emoji, simultaneously resists the escapist pleasures of nostalgia — the antiquated objects of our youth, which are often synonymized with cultural and political simplicity — while acknowledging the inescapable nostalgia of pleasure. Manhattan, maker of markets, looms in the distance, ever reminding us that there is always more to be wanted.

Paul Kopkau's Crude Suite is on view at 321 Gallery until October 19th, 2019. The exhibition at Socrates Sculpture Park will be on view until March 8, 2019.