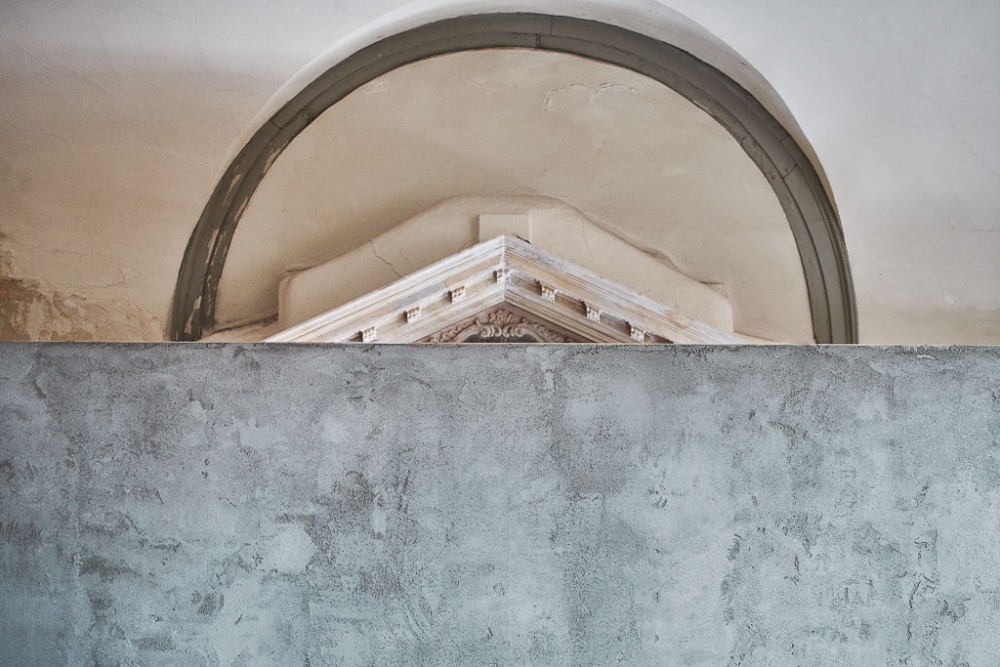 A detail view of Weak Monument, an installation for the Estonian Pavilion during the 2018 Venice Architecture Biennale. Photo by Tõnu Tunnel 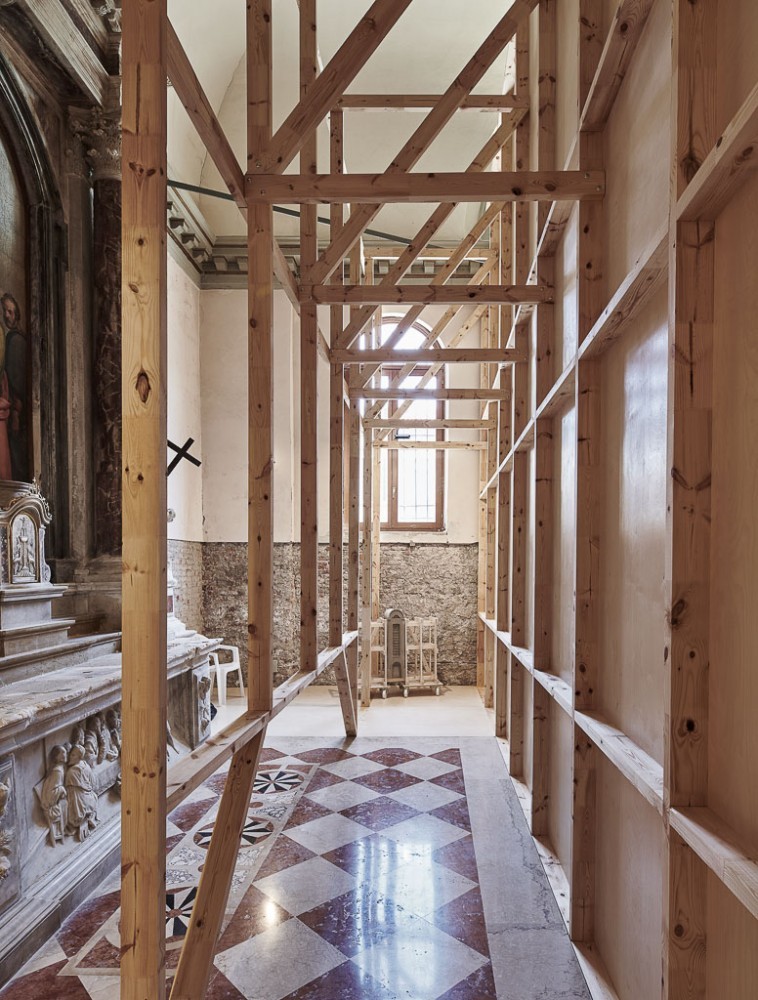 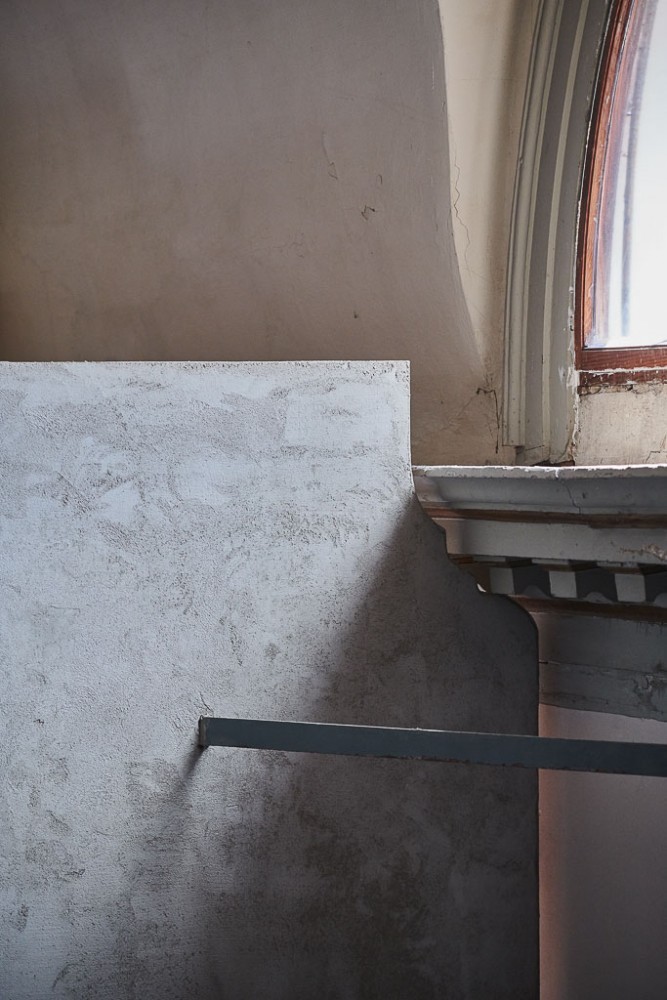 A detail view of Weak Monument, staged in a deconsecrated church in Venice for the duration of the 2018 Venice Architecture Biennale. Photo by Tõnu Tunnel 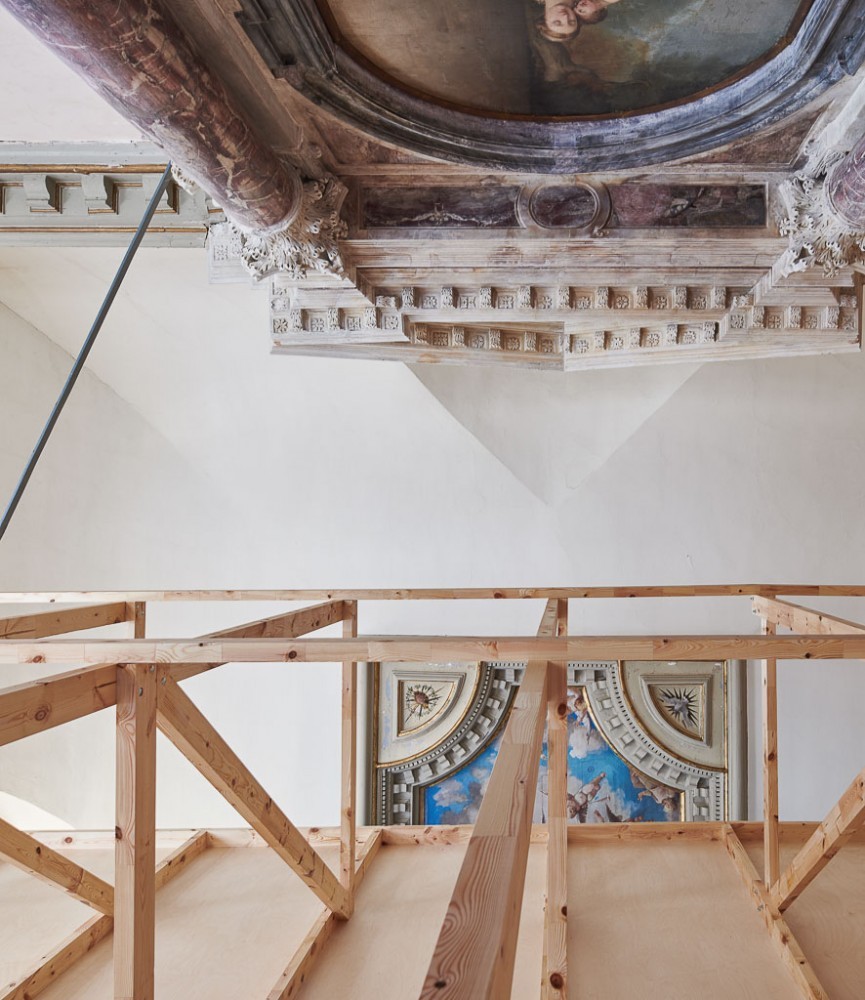 A detail view of the ceiling of Santa Maria Ausiliatrice, the deconsecrated Venetian church where Weak Monument was staged. Photo by Tõnu Tunnel 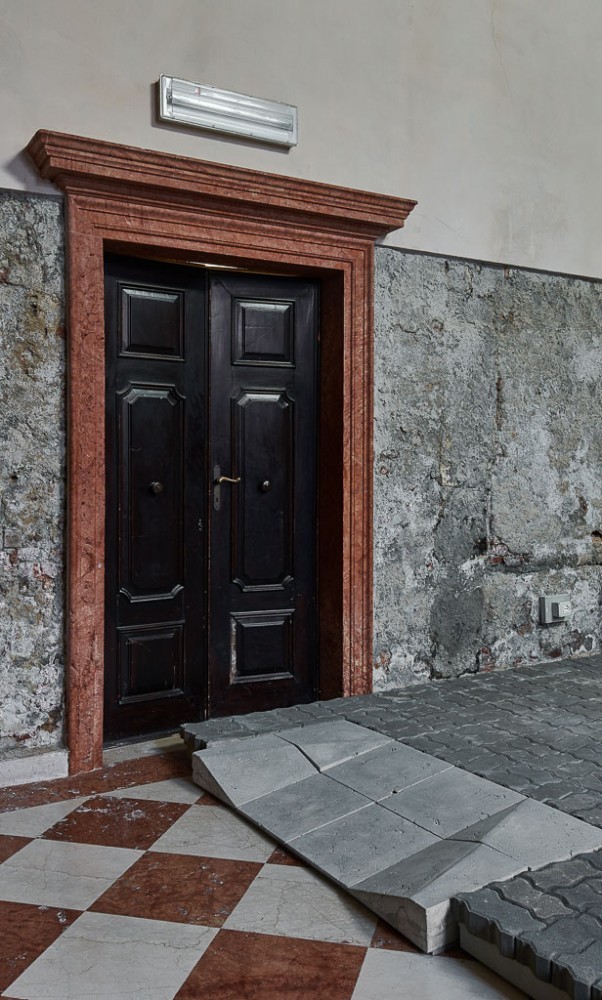 A view of a side door in Santa Maria Ausiliatrice, showing the transition between the church's marble floor and the installation's concrete block paving. Photo by Tõnu Tunnel 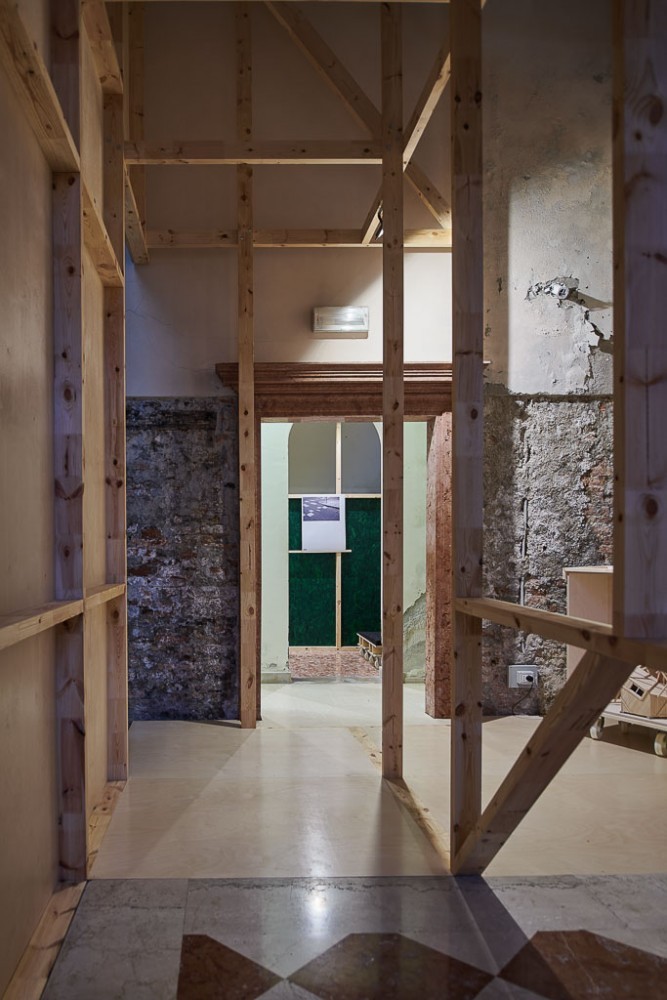 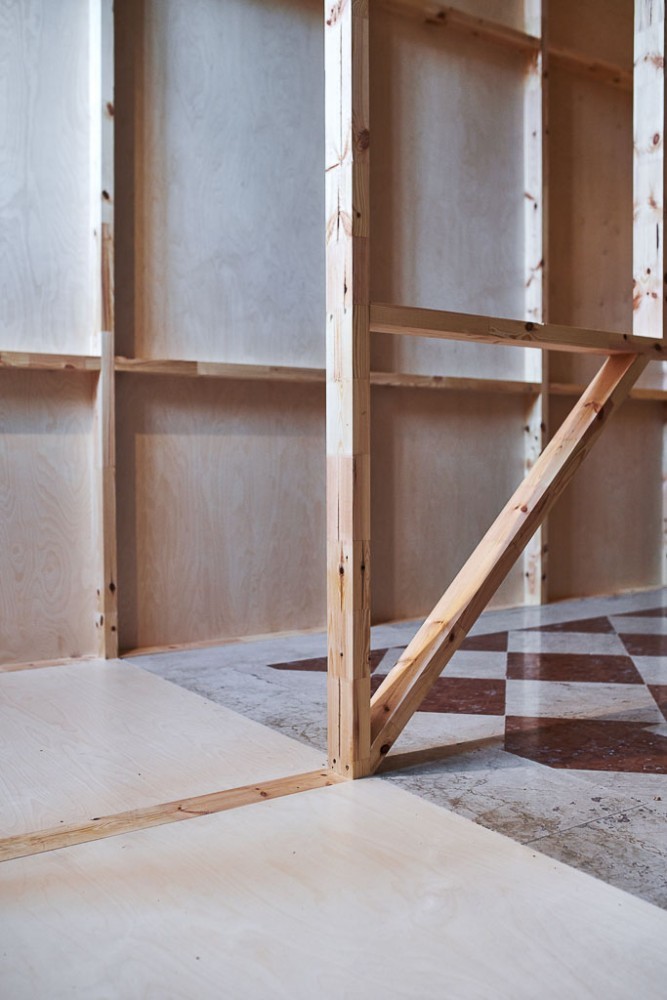 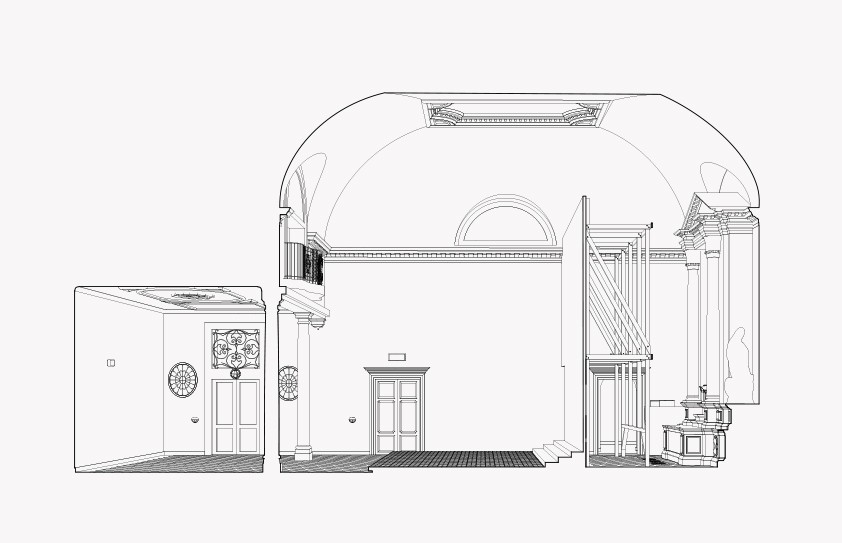 A perspective section drawing of the Weak Monument installation, showing the construction of the installation within the baroque church. 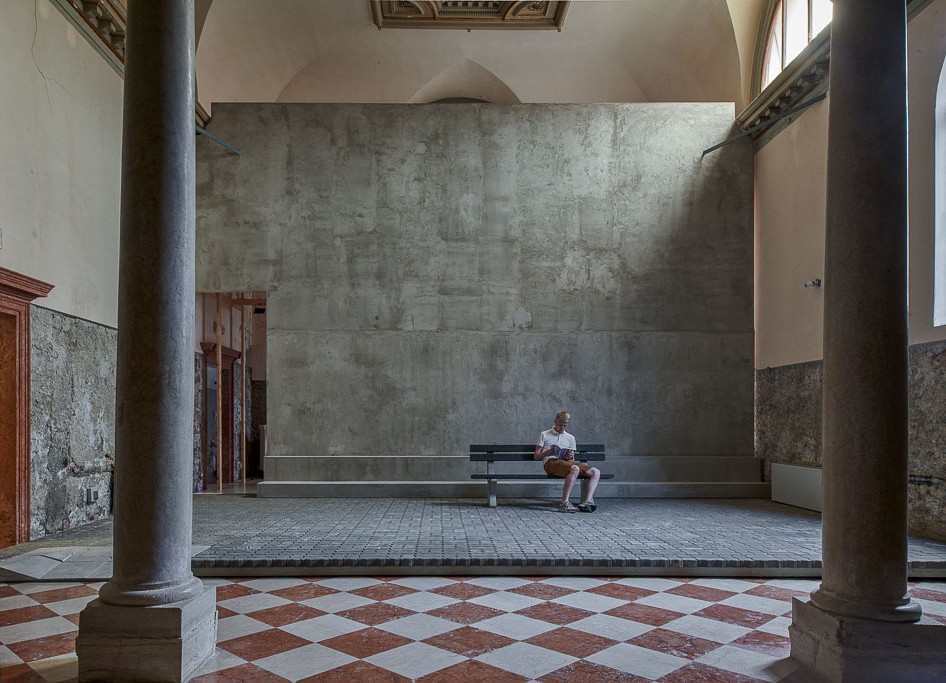 A visitor seated on a bench within the installation of Weak Monument, during the opening of the Venice Architecture Biennale in May 2018. Photo by Tõnu Tunnel 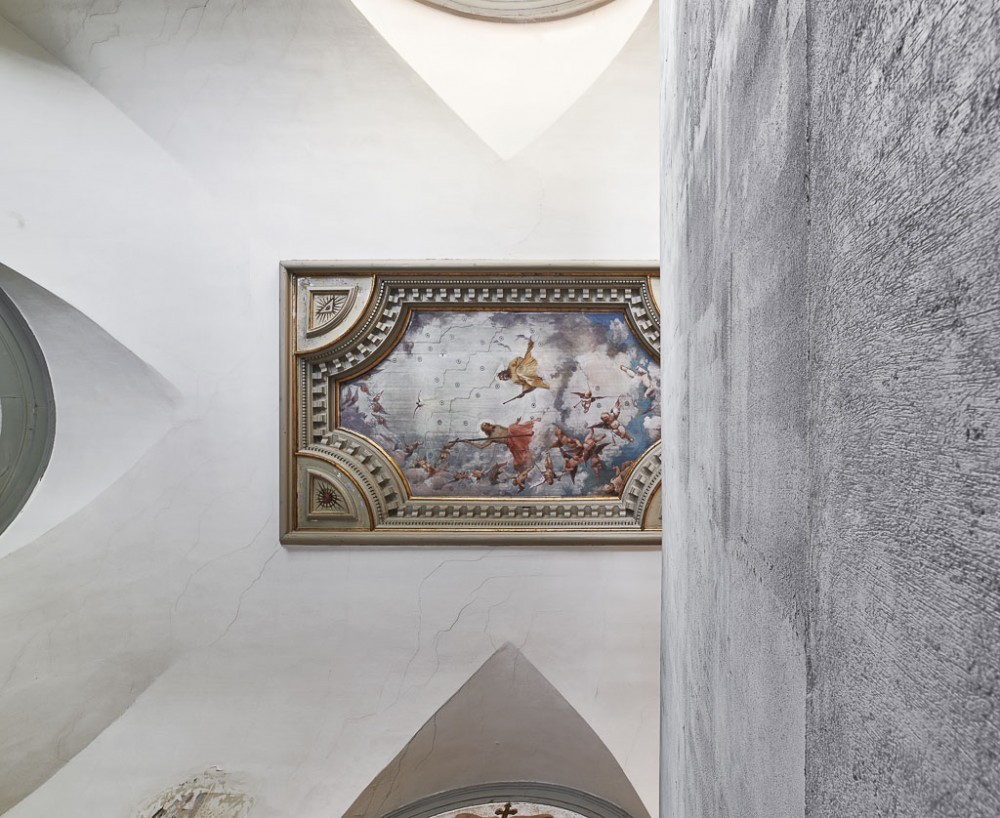 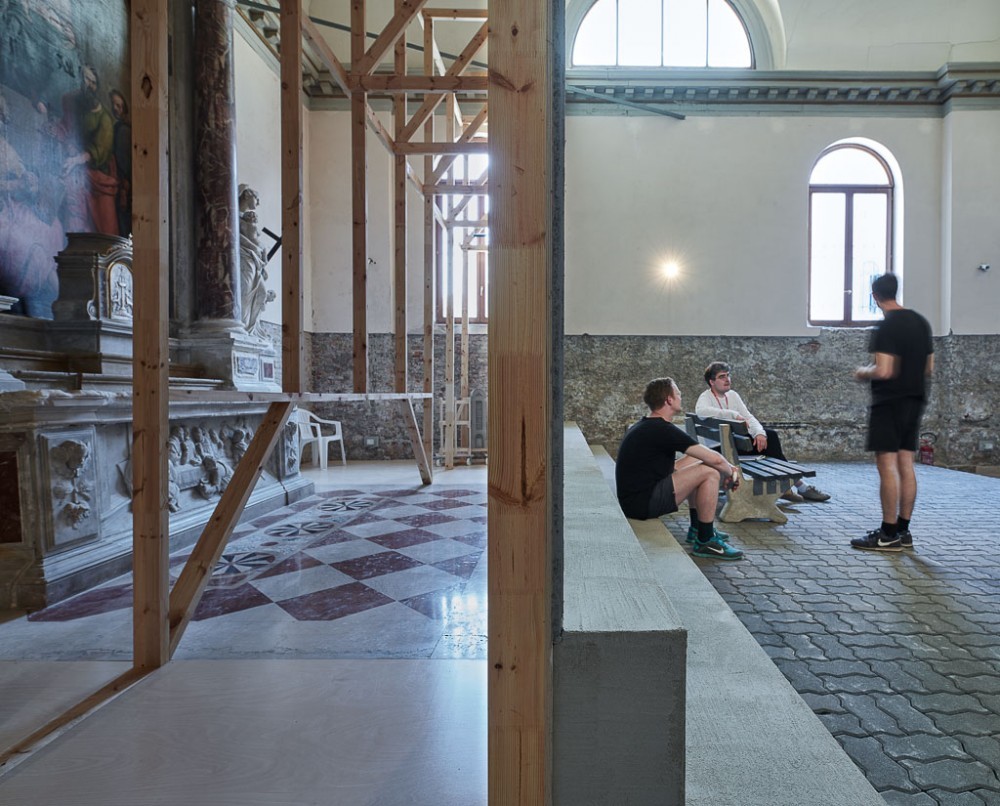 The author in conversation with the curators of Weak Monument during the opening of the Venice Architecture Biennale in May 2018. Photo by Tõnu Tunnel 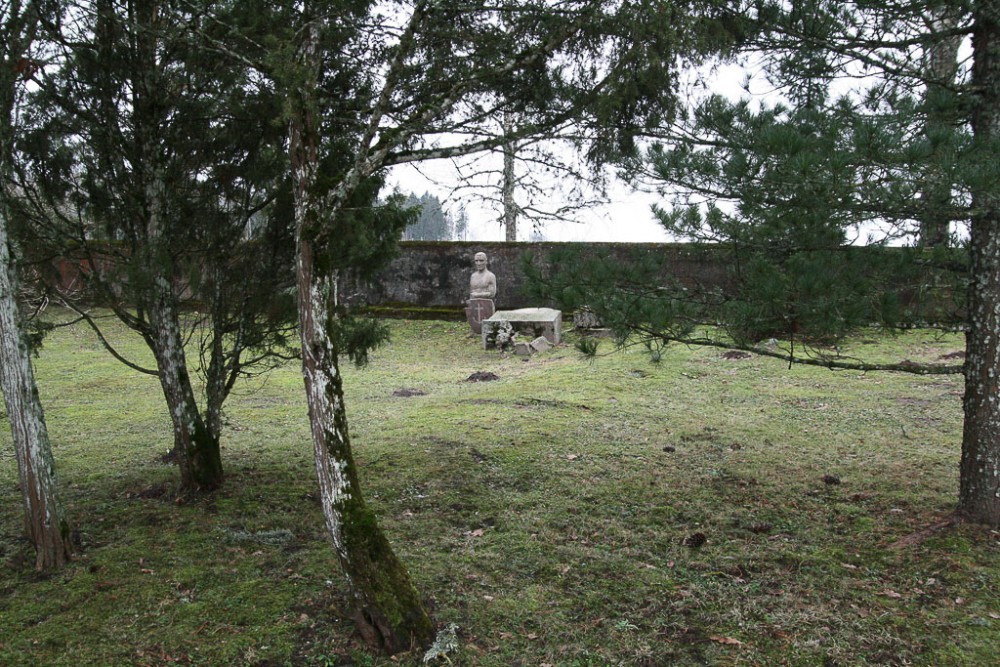 A monument of the kneeling warrior in the village of Kalevipoeg, in the Torma region of Estonia. Photo by Roland Reemaa. 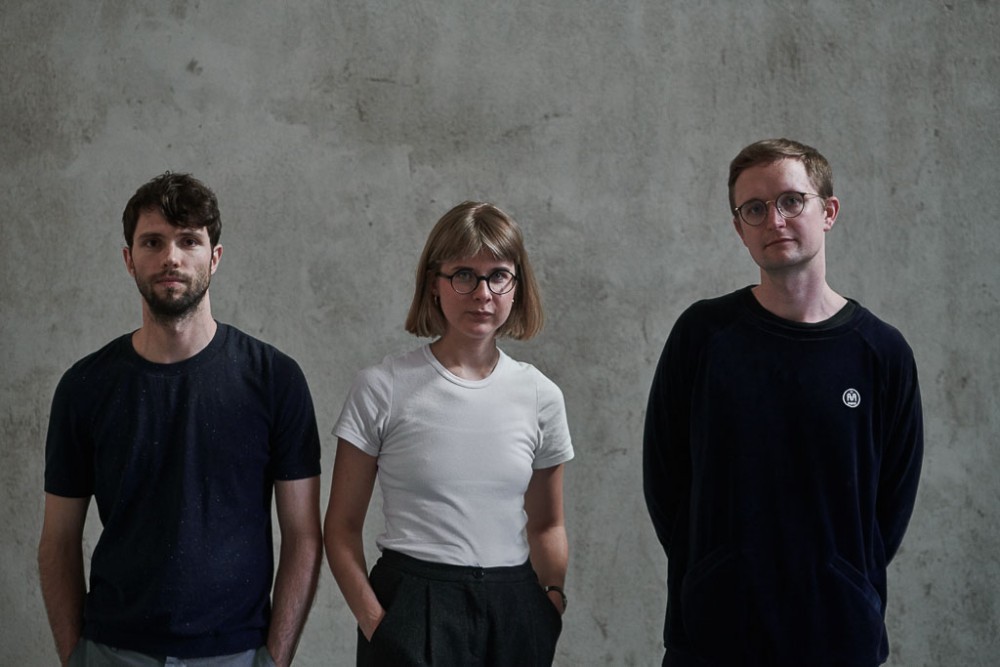 The curators of Weak Monument, Tadeáš Říha, Laura Linsi, and Roland Reemaa (from left to right). Portrait by Tõnu Tunnel

A WEAK MONUMENT: THE ESTONIAN PAVILION AT THE 2018 VENICE BIENNALE

Across millennia, monuments have given shape to the only true common ground we share. They elude definition, representing with seemingly endless variety the mélange of cultural cues that constitute civilization. Standing among the most intransigent of spatial gestures, they are easy to recognize. We often read from them based on our own experiences — reciprocity, fear, triumph, commemoration, or remembrance. Whatever the context and throughout history, the monument has proven an ability to both recall and request that which no longer exists, or that which might exist in time to come.

The figurative monument — that which represents the human form — has, above all, taken center stage in the collective consciousness. Take, for instance, Lincoln lounging at the end of the National Mall. In Daniel Chester French’s vision for the President — a leader slain at the cusp of victory — every sculpted crease was reasoned symbolically. The fact that he is depicted sitting, rather than standing or kneeling, signifies far more than the color of the stone (ivory white) or its vast scale (almost ten meters tall). Sitting, after all, is nothing more than a downward pressure on something “defenseless and incapable of exerting counter-pressure.” These, the words of the pioneering crowd psychologist Elias Canetti (Masse und Macht, 1960), cite an idea oft overlooked: that the dignity of sitting is synonymous to the dignity of duration. Irrespective of whether or not a figure is draped in ermine and topped by a crown, it is their comportment — a marriage between the act of sitting, the positioning of arms, the fixture of a gaze — which combine to invoke the iconography of a throne. As a representational image Lincoln here is portrayed as a first among equals in perpetuity, embodying no less than the ideals of a nation. Highly charged and inordinately referential, monument-making is a constantly evolving art.

The evolution of the monument — its nebulosity, typological insecurity, and spatial variety — is the focus of Weak Monument (Nōrk monument), the Estonian Pavilion at the 16th Biennale Architettura in Venice. Drawing upon Estonia’s peculiarities as both a case study and springboard, its creators — Laura Linsi and Roland Reemaa (both Estonian) and Tadeáš Říha (who is Czech) — argue that any belief in the monument’s capacity to endure is, in fact, defunct. While its “signification is still commonly recognized, for good or bad,” they are nonetheless “acted upon.” In Estonia, the least Baltic of the Baltic nations, the classical concept of the monument — that of the explicit representation of power — appears as a foreign intruder. “Its presence,” they argue, “is marginal, its tradition non-existent, and its form tormented by an apparent cultural displacement.” A strong conviction, which they support with a neat analogy centering on the village of Torma in eastern Estonia, a stone’s throw from the present-day Russian border. There, in 1923, “a statue of a kneeling warrior was put up to confront the East. When the East came a few years later, the statue was turned to face the West, who then came and turned him around, followed by the East, once more, who made him the face the West, before blowing him to pieces. In Estonia,” the curators conclude, “monuments dance.”

Weak Monument is a scenography — a monument in itself — tightly choreographed to frisk the space it occupies. Set in the deconsecrated church of Santa Maria Ausiliatrice on the Fondamenta San Gioacchino, midway between Venice’s Arsenale and the Giardini, its central installation plays with the eroded remains of the church’s interior: a room with a “monumental yet decadent spatial symmetry and hierarchy.” Just meters away from the former altar stand two walls slicing the nave into two: one rising vertically, veneered in concrete, and the other laid horizontally, articulated as pavement in the form of a plinth, accommodating an ordinary public bench. Separated from the nave’s interior envelope by no more than a few centimeters, these incongruous bodies outline the space with precision.

Masking both the altar wall and the original marble floor in one fell swoop, the installation — which aligns with and relates to a series of interior cues (windows, walls, frescoed surfaces and ornamentation) — forces a congregation of everyday and exceptional structures to inhabit the same spatial domain. What at first glance appears to be an impenetrable concrete wall is, in fact, an enormous threshold. Once through the opening, its structure is revealed to be an uncomplicated plywood assembly. Metal bars pin the new wall to the existing in an act of knowing sleight of hand. Behind the scenographic façade, in a space defined by the curators as “transitional", the paved concrete floor shifts from block paving and yields to ply, generating a continuous wooden surface. It’s interrupted only by the marble dais of the altar, which resurfaces — bizarrely — as an intruder in its own right. Having been co-opted by the “ordinary”, the church — its baroque face, color, and iconography — is at once spatially diminished and metaphorically heightened.

Weak Monument exhibits serious intent. As an installation it illustrates a depth of thought rarely found beyond the high-stake, high-value displays at the level of international museums, and against which very little on display at this year’s Biennale comes close. In unsettling assumptions inherited over the turbulent course of the 20th century, and then reframing them by way of considered research and intelligent design, Weak Monument picks at a thread woven tightly into the blanket of sometime-suffocating architectural thought. If, as Francis Bacon wrote over 400 years ago in Essex's Device (1595), “the monuments of wit survive the monuments of power,” this year’s Estonian Pavilion deserves to survive the passing whims of the season.

James Taylor-Foster is a designer, critic, and curator of contemporary architecture and design at ArkDes in Stockholm. He is a participant of FREESPACE, the 16th International Architecture Exhibition — La Biennale di Venezia.