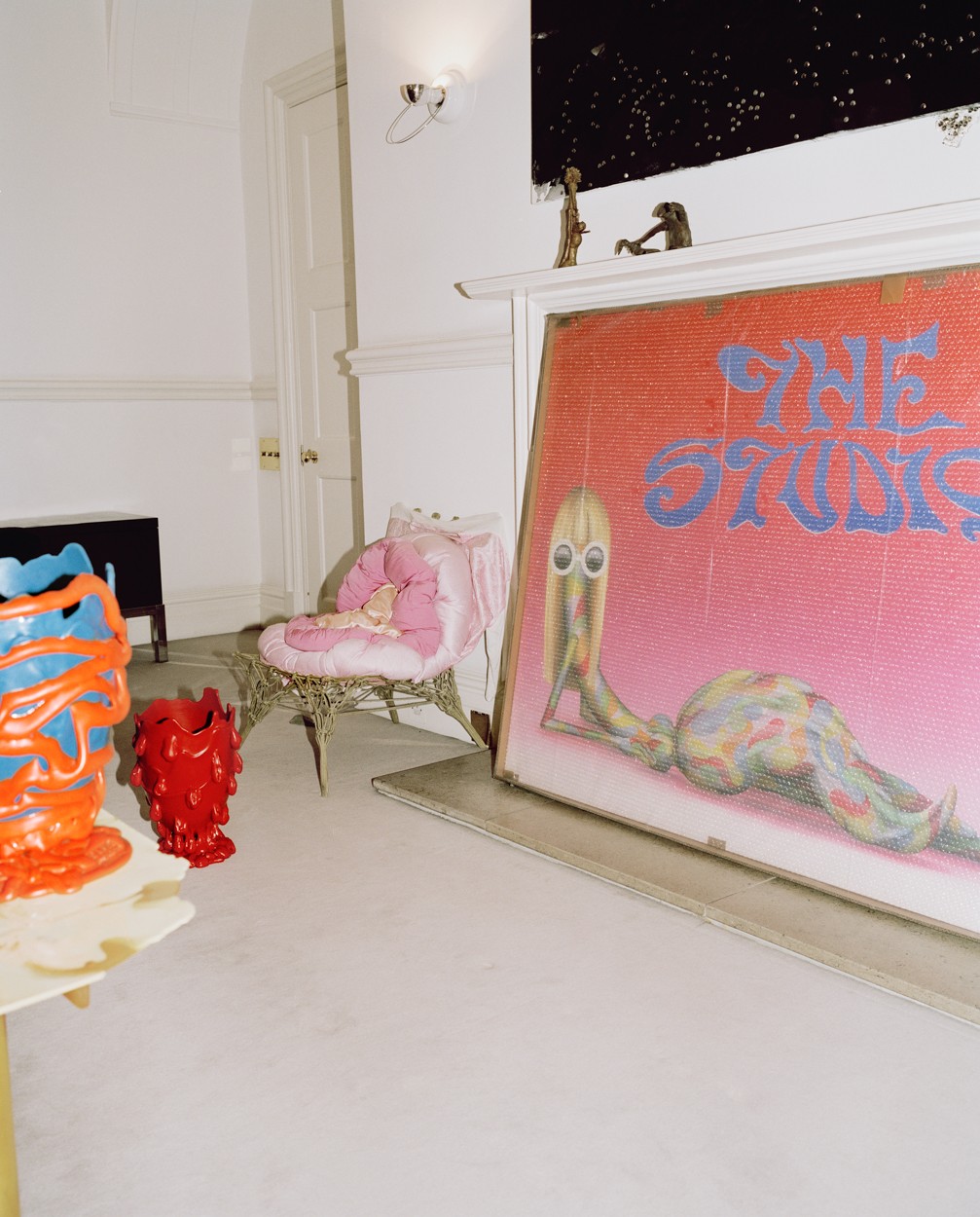 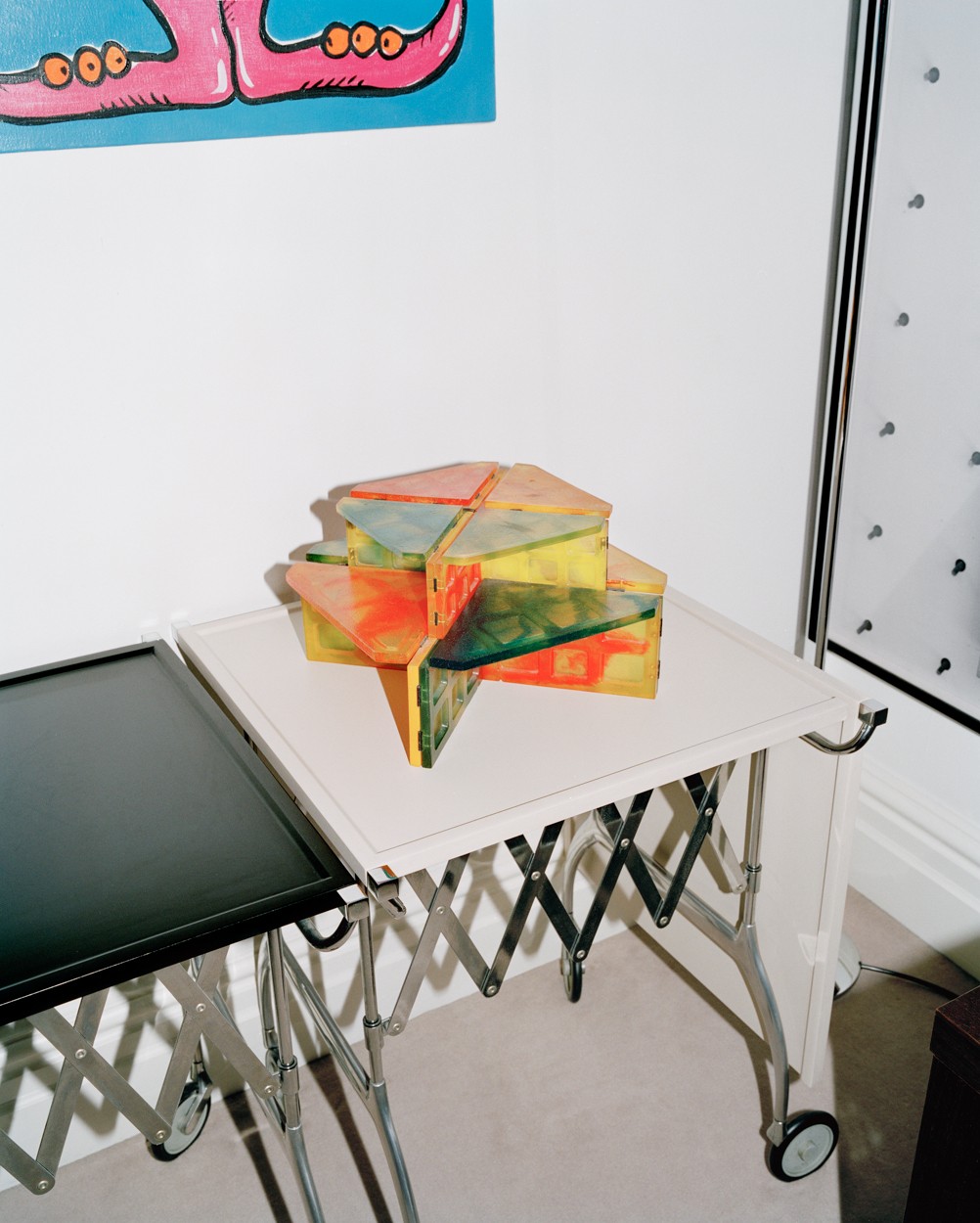 The discernible cartoon feet of a Julia Wachtel’s Landscape No.11 (Government) (1990) hover above a modular coffee table from the mid-90s, designed by Gaetano Pesce. 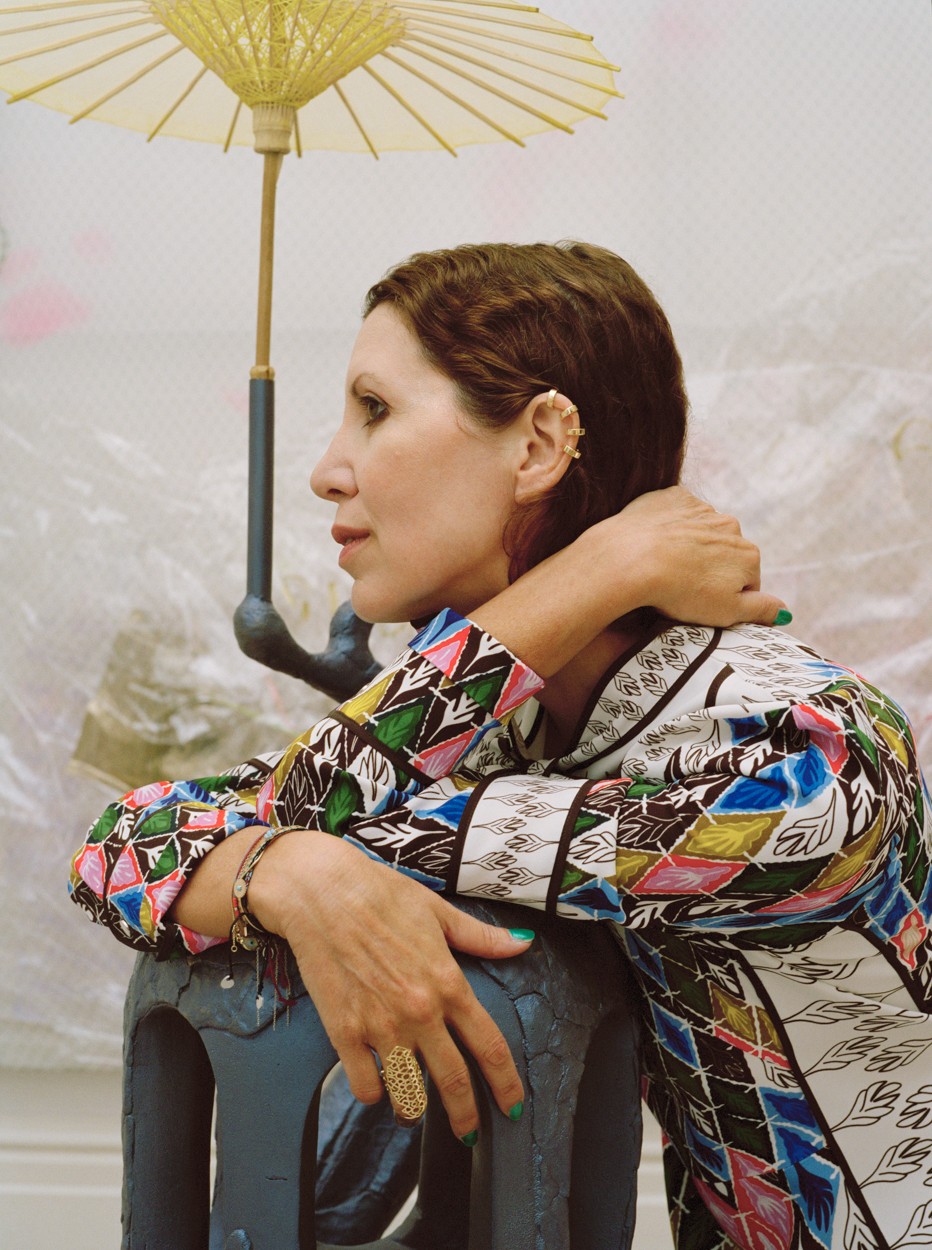 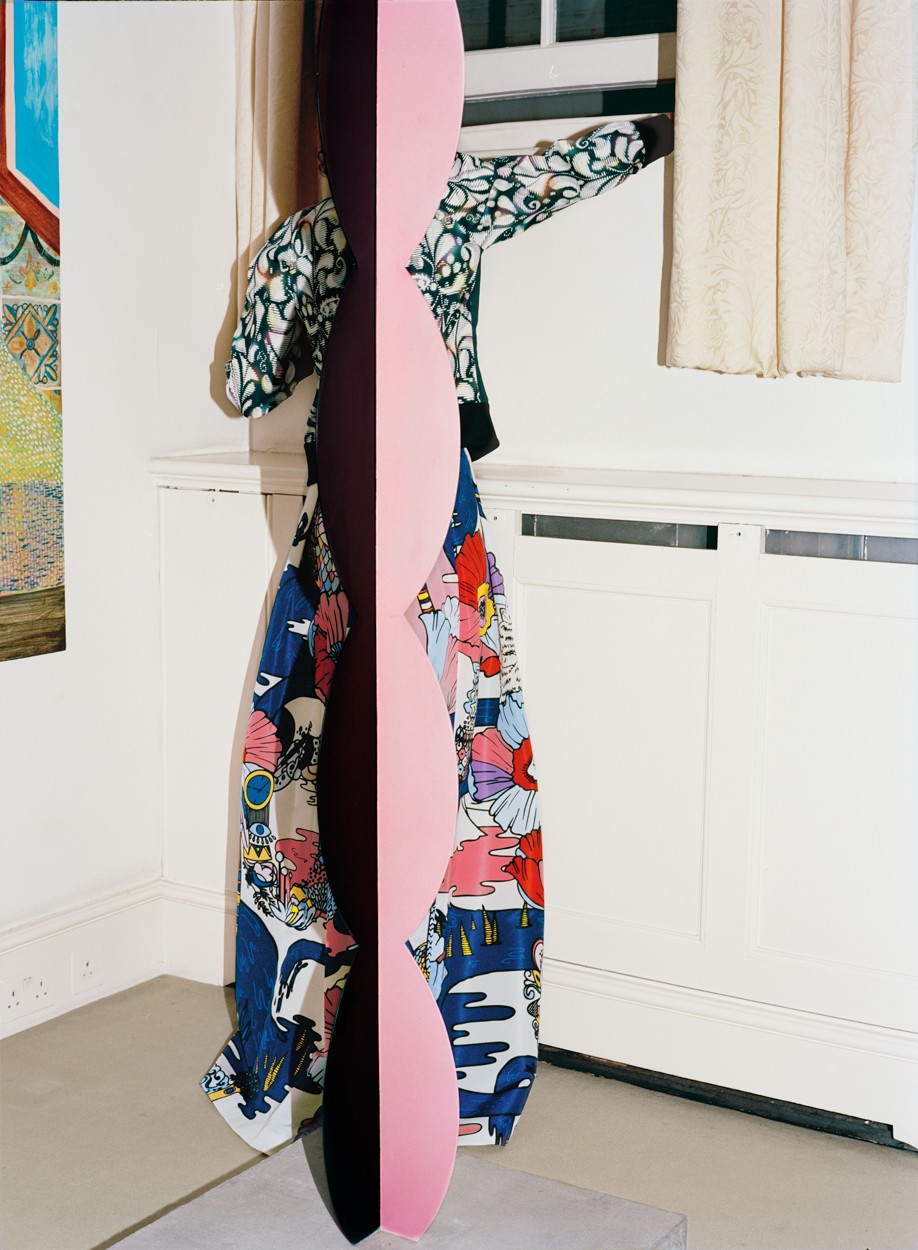 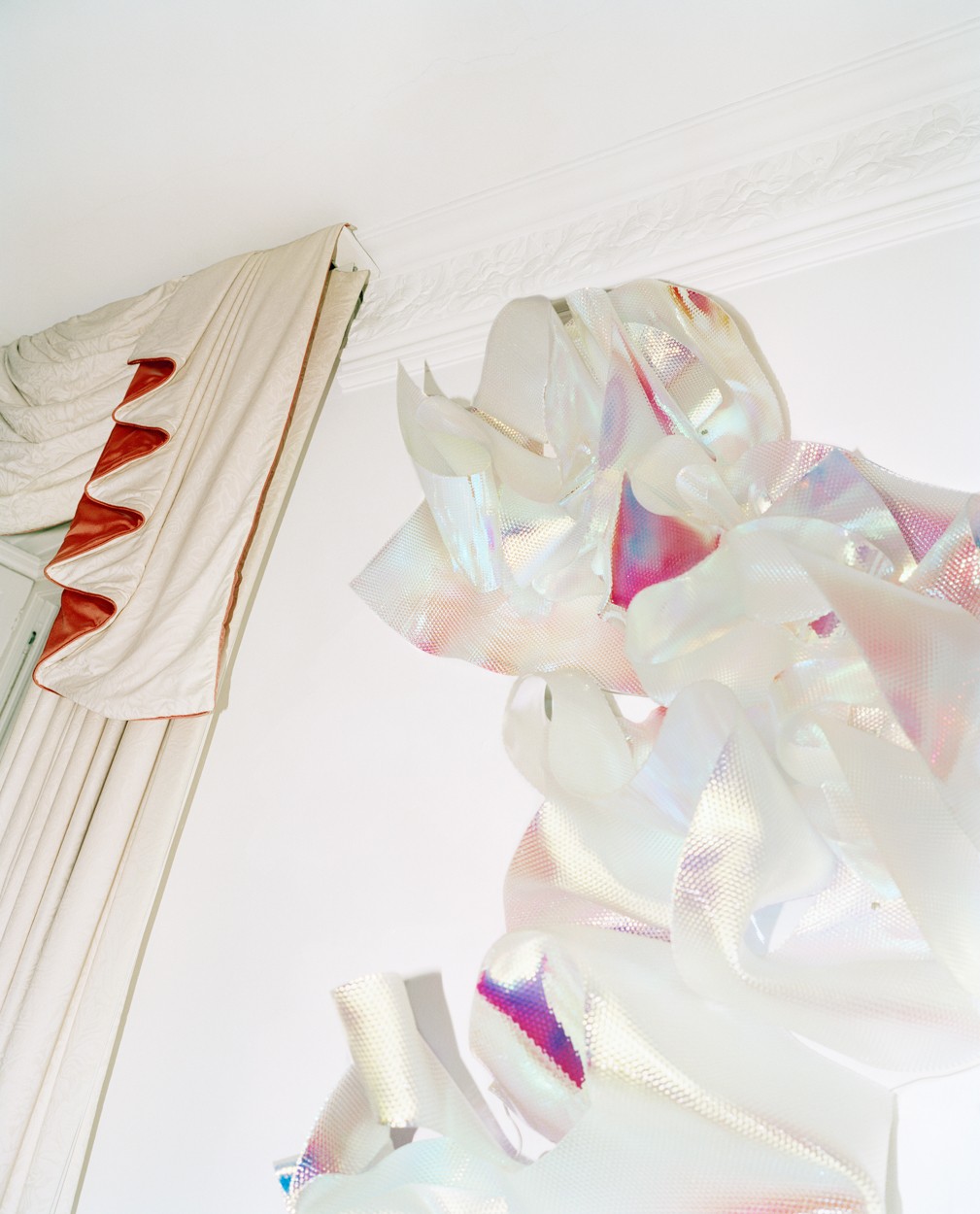 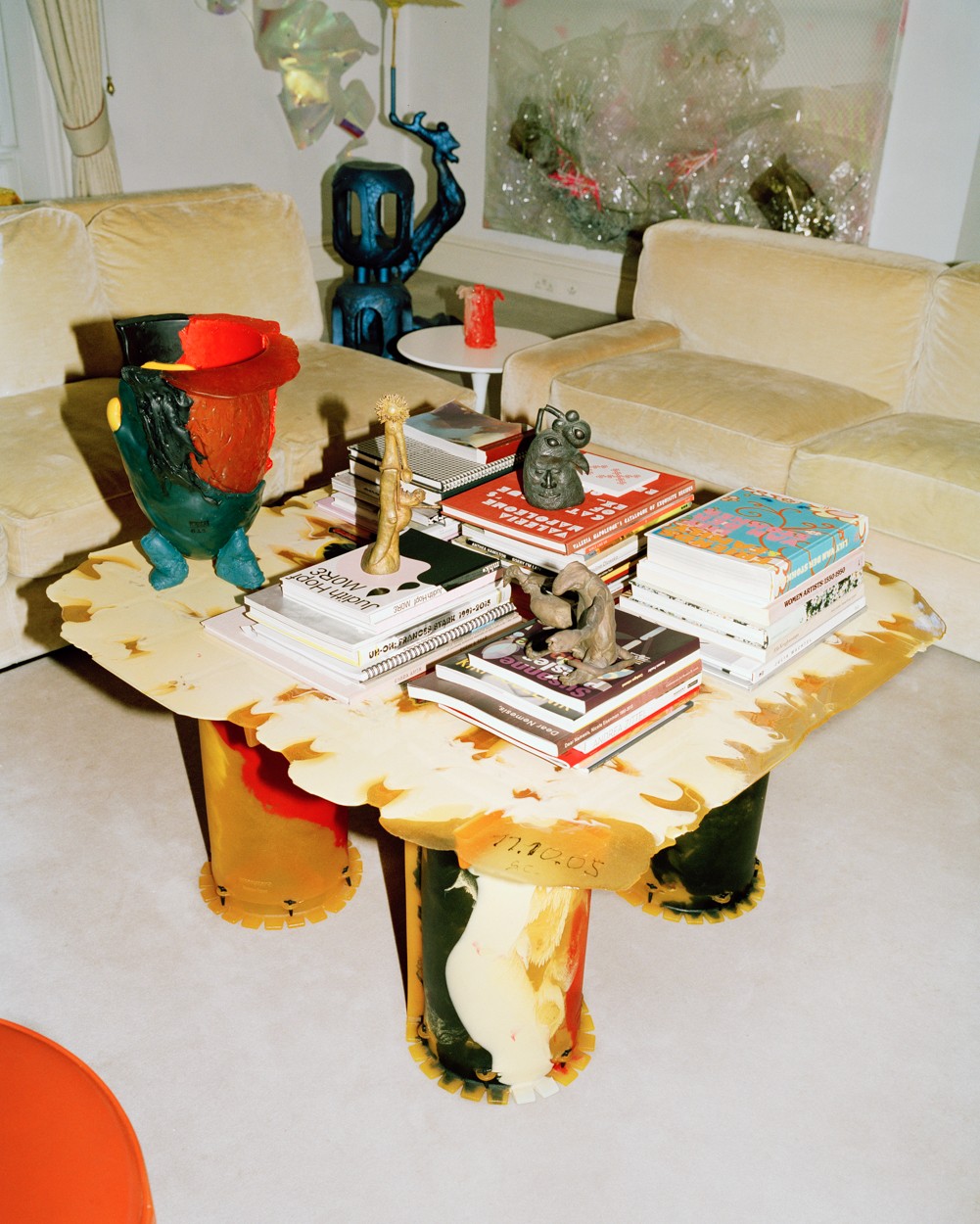 The house Napoleone lives in has a long history of artists visiting that dates back to the beginning of the of the 20th century, a time when painters such as Edward Burne-Jones or Edward Poynter frequently came over for formal dinners. These days Napoleone casually gathers her illustrious group of guests around the Nobody’s Perfect coffee table by Gaetano Pesce (c. 2000). 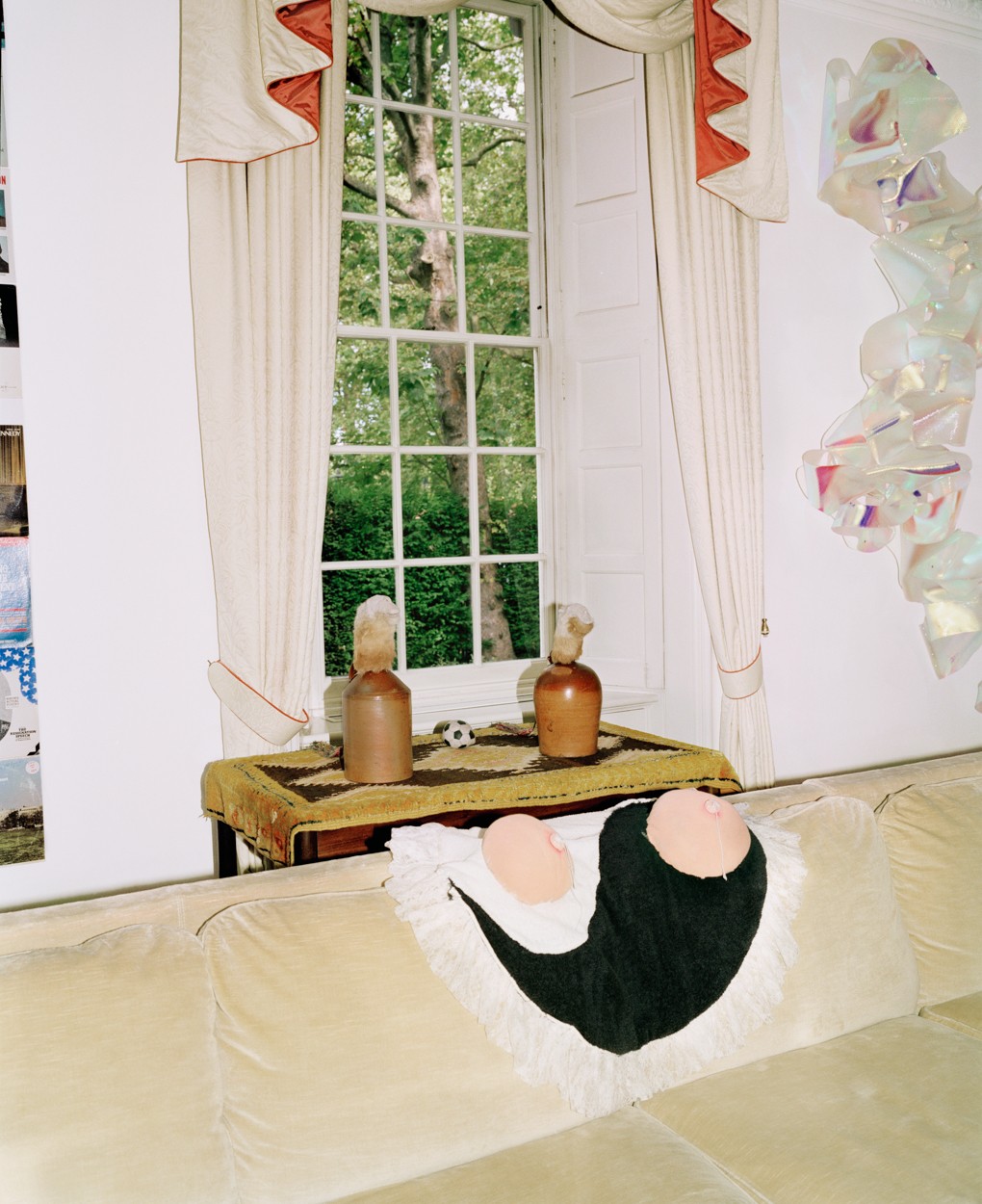 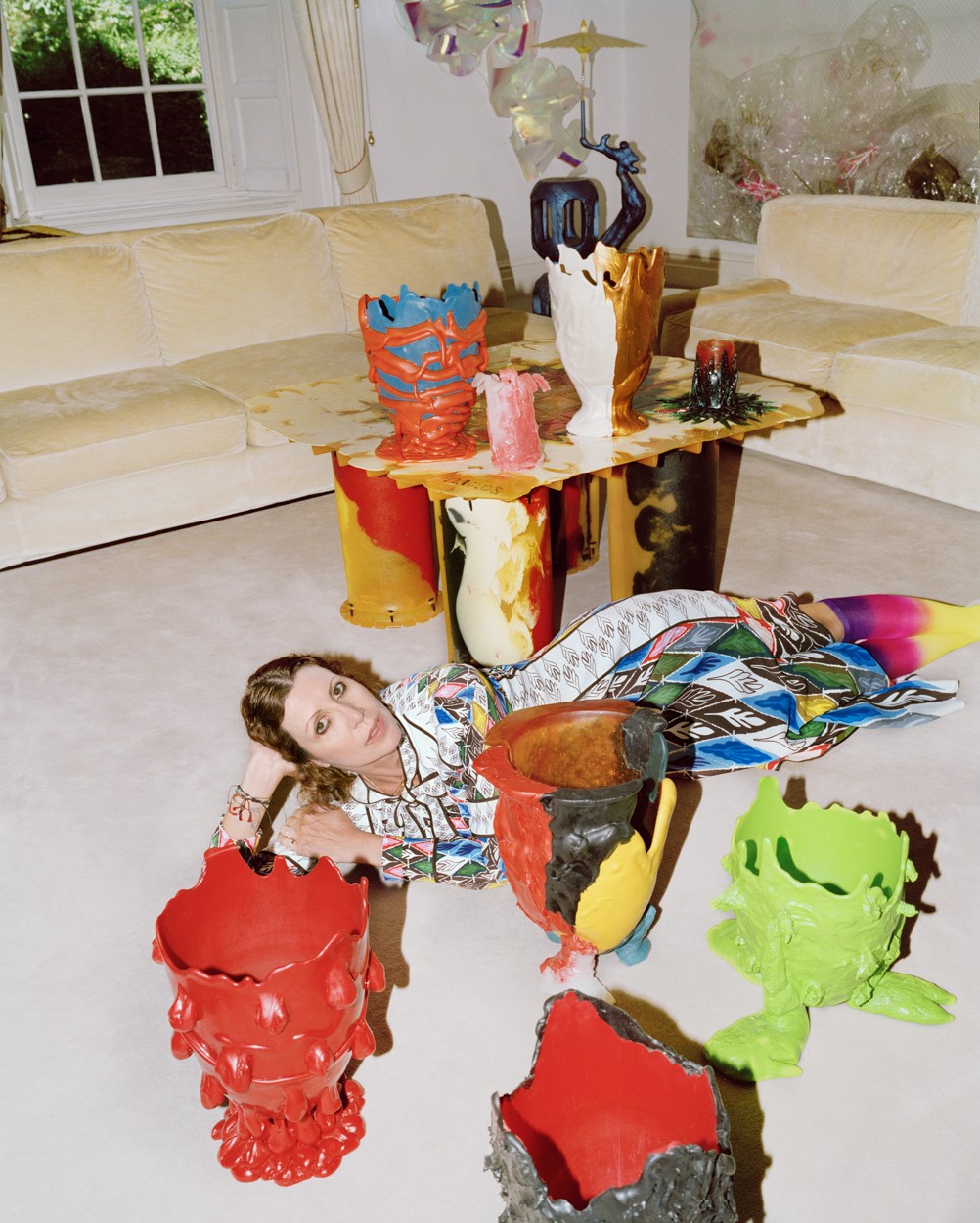 Art collector Valeria Napoleone reclining on her home’s carpeted living room floor, surrounded by resin and rubber vases by Italian designer Gaetano Pesce. The house located in London’s Kensington neighborhood, was designed in the 1860s by architect Philip Webb and was first owned by George Howard, a well-known patron of the Aesthetic Movement. The spirit of Howard and the Pre-Raphaelite Brotherhood has long been usurped by the presence of Napoleone’s all-female art collection, which includes work by the likes of Bertha Fischer, Guan Xiao, and May Hands. 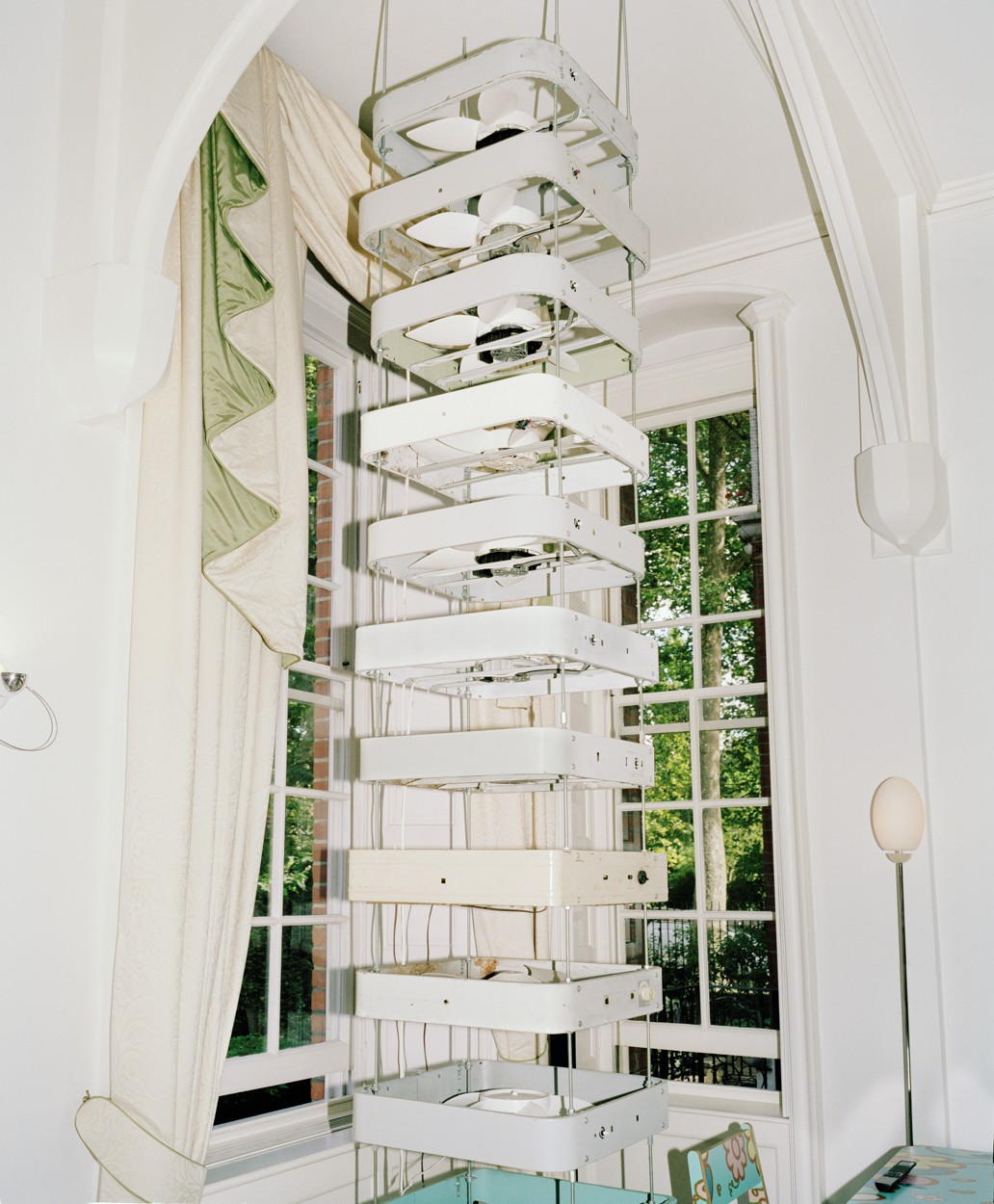 Among the standout pieces in the collection is Nina Canell’s 2009 ventilator sculpture Endless Column (Alternating Current for Twelve Electric Fans), which dominates the dining room. 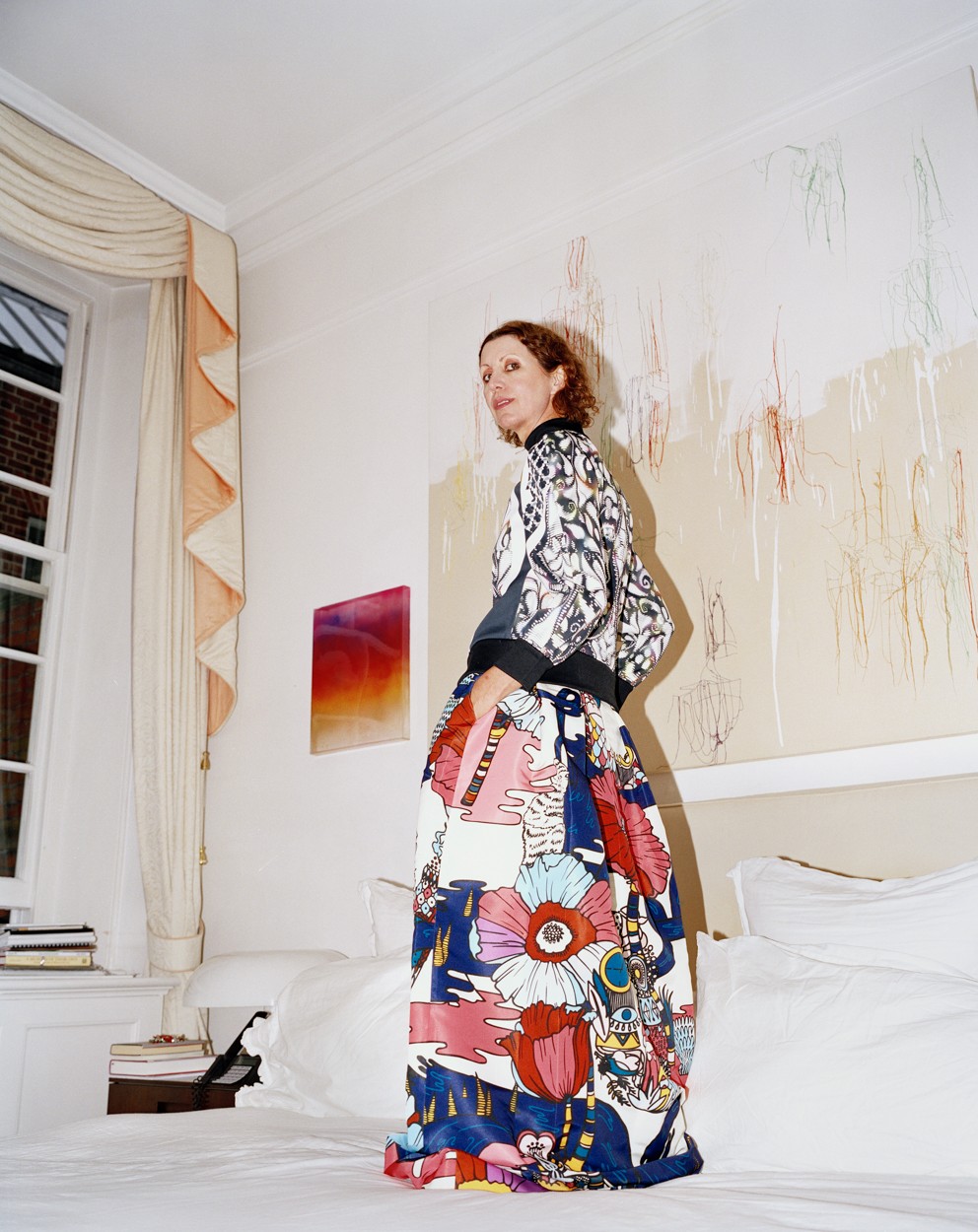 Napoleone stands atop her bed in her master bedroom, whose walls are lined with the large-format artwork Italic textUntitled (Blanc #985)Italic text (1997) by Egyptian artist Ghada Amer and a piece by American artist Mika Tajima. 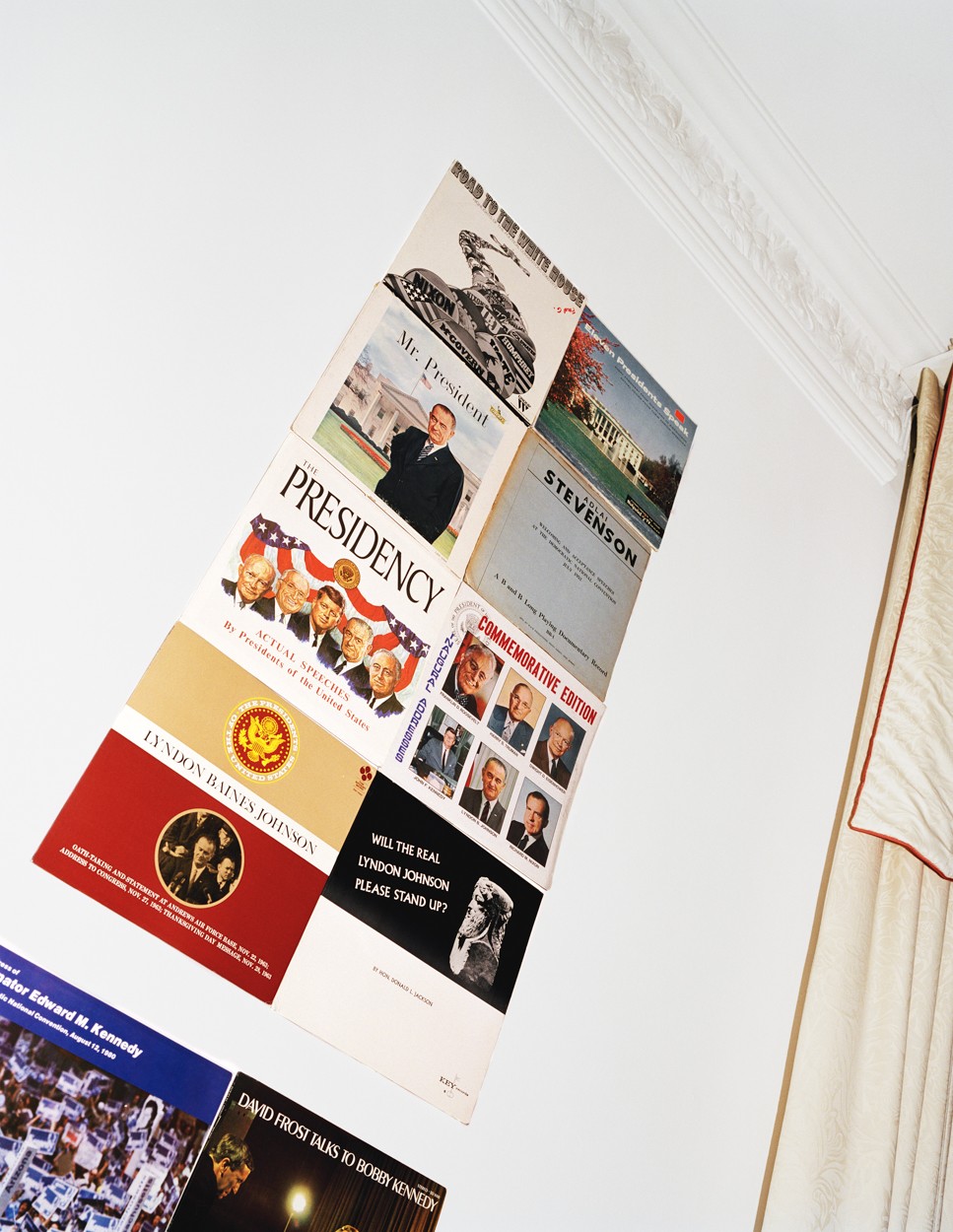 Sixteen record covers from Sharon Hayes’s politically charged An Ear to the Sounds of Our History (Road to the White House) from 2011.

Wearing her signature platform heels, Italian-born Valeria Napoleone poses in her West London home surrounded by one of the most rigorous and personal collections of contemporary art in the world. Over the last two decades, Napoleone has been amassing work uniquely by women artists, among them Tomma Abts, Ghada Amer, Aleksandra Domanović, Ida Ekblad, Shirin Neshat, and Mai-Thu Perret. While living with art made by women has been an essential and enriching experience for her, Napoleone’s role transcends the collection — her true passion is for the artists themselves, whose politics and creativity fuel her feminist-focused philanthropy. Over the years she has taken an increasingly active role in promoting, producing, researching, and realizing projects that provide an alternative to the systemically male-dominated art world. Thanks to her tenacity and infectious energy, Napoleone has been able to cultivate many meaningful relationships, initiating conversation and nurturing collaboration by connecting the dots between artists, curators, scholars, and trusted dealers.

Last year she launched Valeria Napoleone XX — a name that nods to both the female chromosome and the fact that she’s a twin — which she describes as an “umbrella platform for initiatives that work towards increasing the representation of female artists in major public museums.” Valeria Napoleone XX’s first two programs were with art institutions on either side of the Atlantic: Contemporary Art Society in the U.K., and SculptureCenter in Long Island City, Queens. Napoleone’s advocacy of women artists who’ve been long overlooked by the art-world establishment has led her to raise the related question of who exactly is doing the looking, inspiring her to bring fresh perspectives to audiences outside the major art cities. Consequently, with Contemporary Art Society, she will purchase a significant piece by a female artist every year which will be donated each time to a different regional museum in the U.K. Women artists represent less than ten percent of the holdings in most of the museums that submitted applications for this year’s donation, affirming the fact that awareness and intervention are sorely needed.

Meanwhile, in Long Island City, she is sponsoring a major commission every 12 to 18 months. The first artist shown was London-based Anthea Hamilton who, in early conversations with Napoleone and SculptureCenter curator Ruba Katrib, expressed interest in radical Italian design of the 1970s, especially the work of Gaetano Pesce. Thanks to her long-standing relationship with Pesce — design objects by him mark one of the few exceptions to the all-female rule in her collection — Napoleone was able to arrange for Hamilton and Katrib to meet with the legendary Italian in his New York studio. Out of this encounter came the centerpiece of Hamilton’s show, Project for Door (After Gaetano Pesce), based on Pesce’s provocative 1972 proposal for a Park Avenue entryway in the form of a giant pair of male buttocks whose owner is spreading them apart with his hands. At once irreverent and monumental, Hamilton’s installation was fully funded by Valeria Napoleone XX, and the artist’s SculptureCenter show earned her the prestigious Turner Prize in 2016.

Napoleone is also an active trustee of NYU’s Institute of Fine Arts (IFA), one of the country’s most distinguished graduate schools for art history, archaeology, and art conservation. Twice a year Napoleone will work with IFA students and faculty to mount large-scale, experimental installations by contemporary artists. To accompany each exhibition there will be a publication and a series of talks. In an exceedingly accelerated art market, Napoleone has managed to seek out alternatives to the dominant forces by supporting and stimulating institutions that encourage thoughtfulness and critical analysis of art practices of our times. And one can assume that, with Napoleone involved, much of that art will be by women.