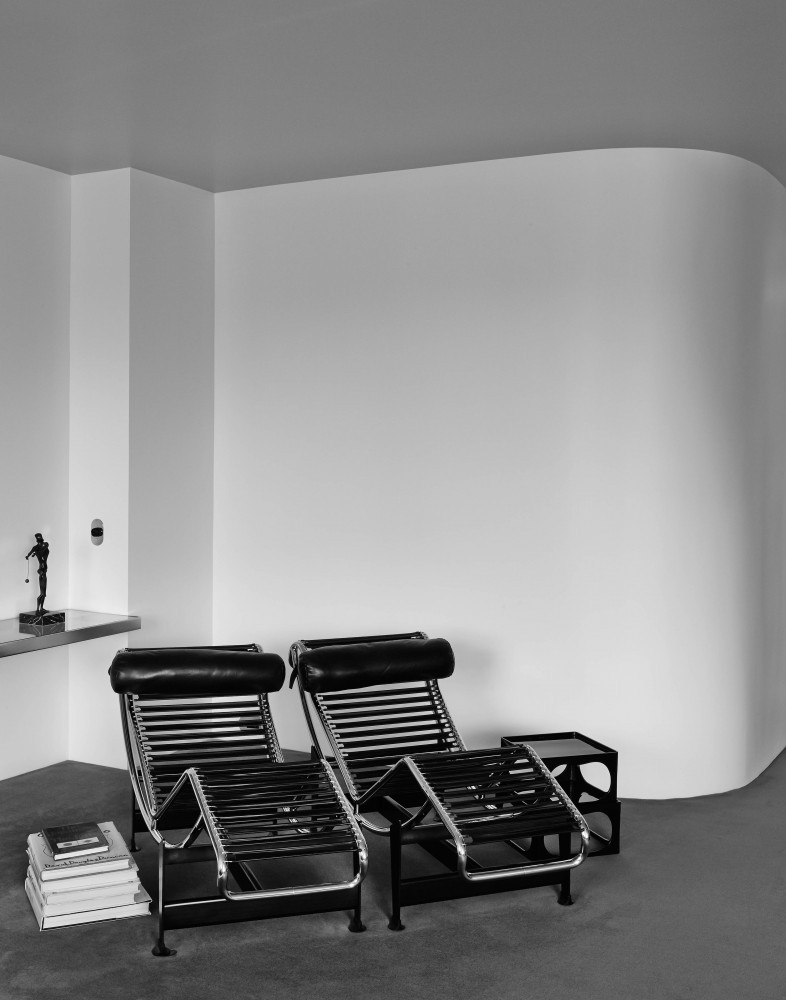 By stripping this pair of Le Corbusier’s classic LC4 chaises longues of all their leather padding, Ward Bennett emphasized their sculptural quality in the room. 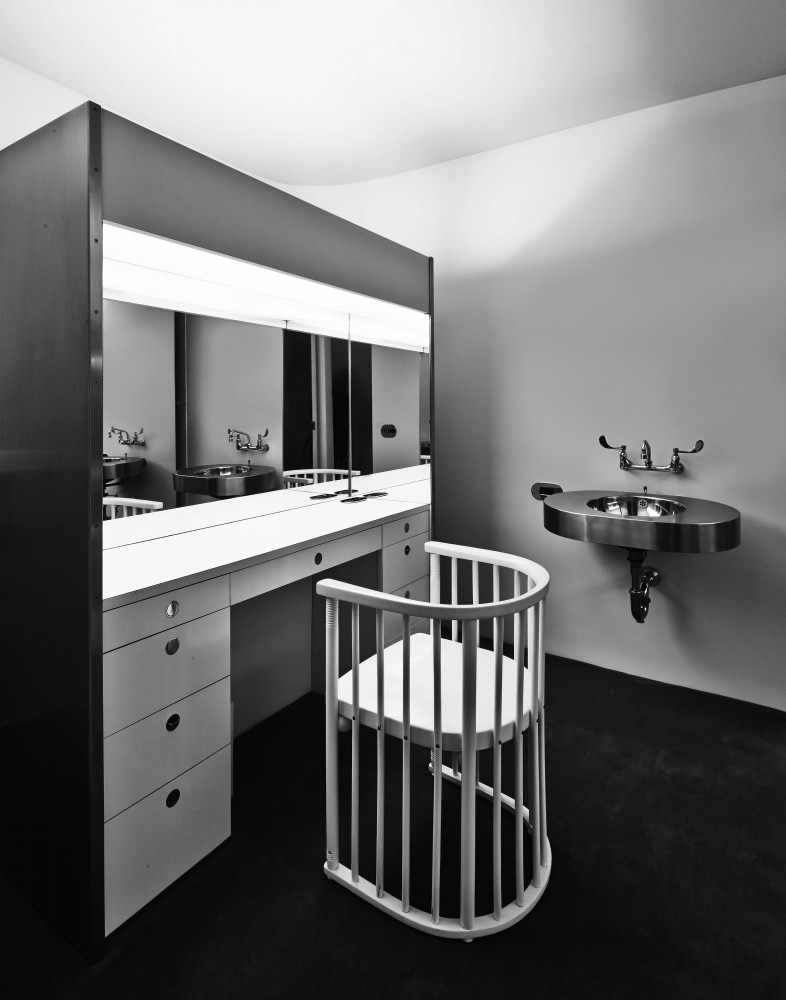 Bennett equipped the bathroom with a vanity and a vintage Josef hoffmann chair, hiding most of the appliances behind mirrored sliding doors. 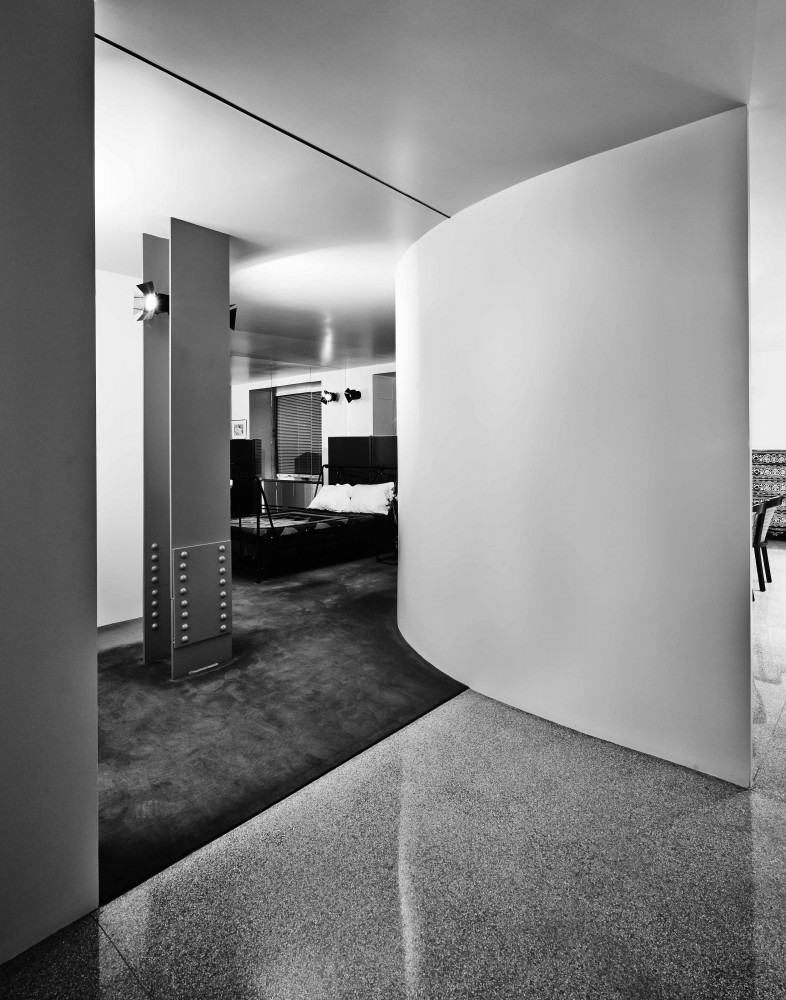 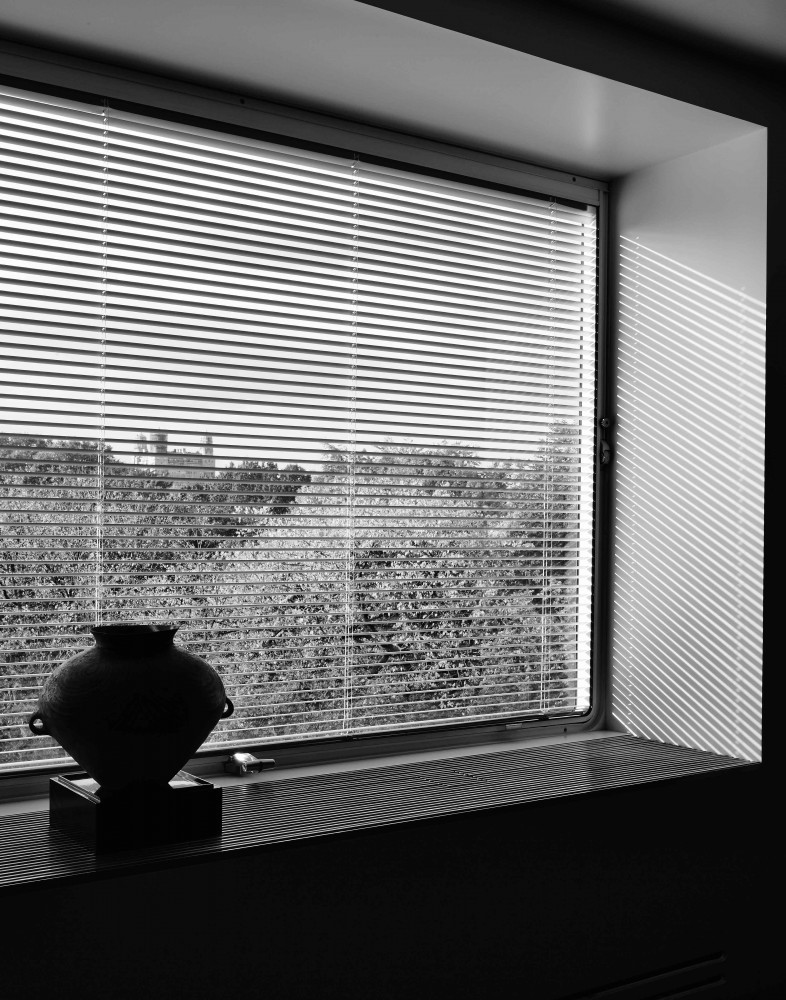 Most details in the 2,000-square-foot apartment were custom-made for Ostrow, including the 360 ̊ pivoting windows with integrated Venetian blinds. 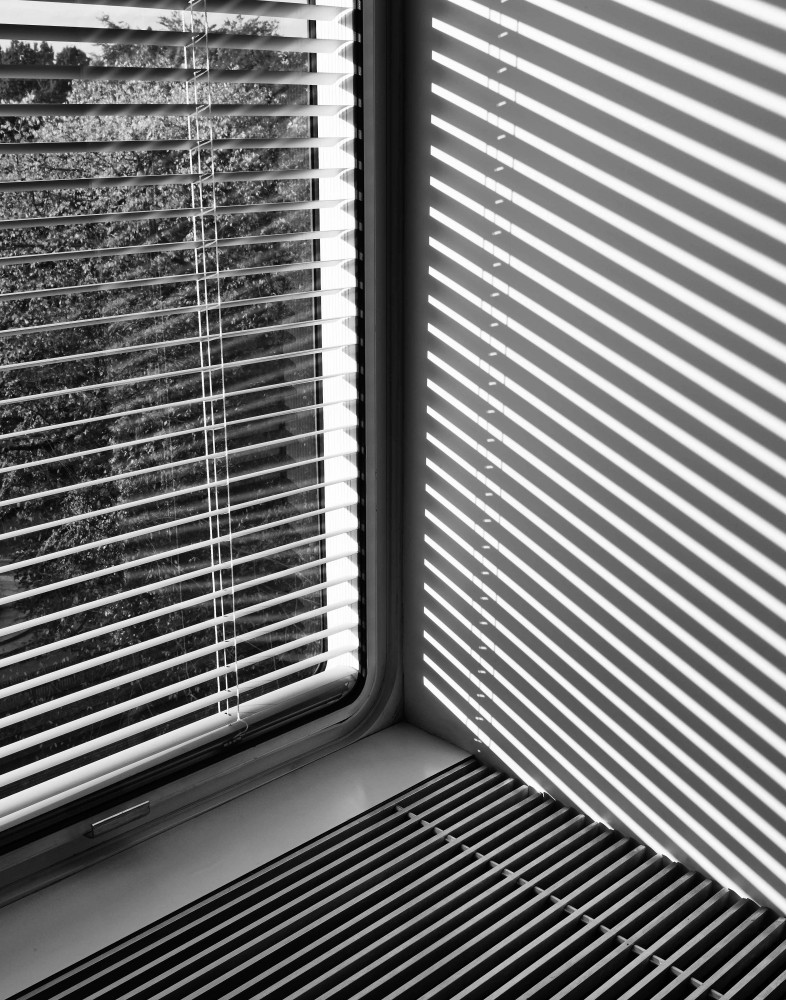 A detail of the custom-made windows with rounded corners and Venetian blinds sandwiched in-between two sheets of glass. 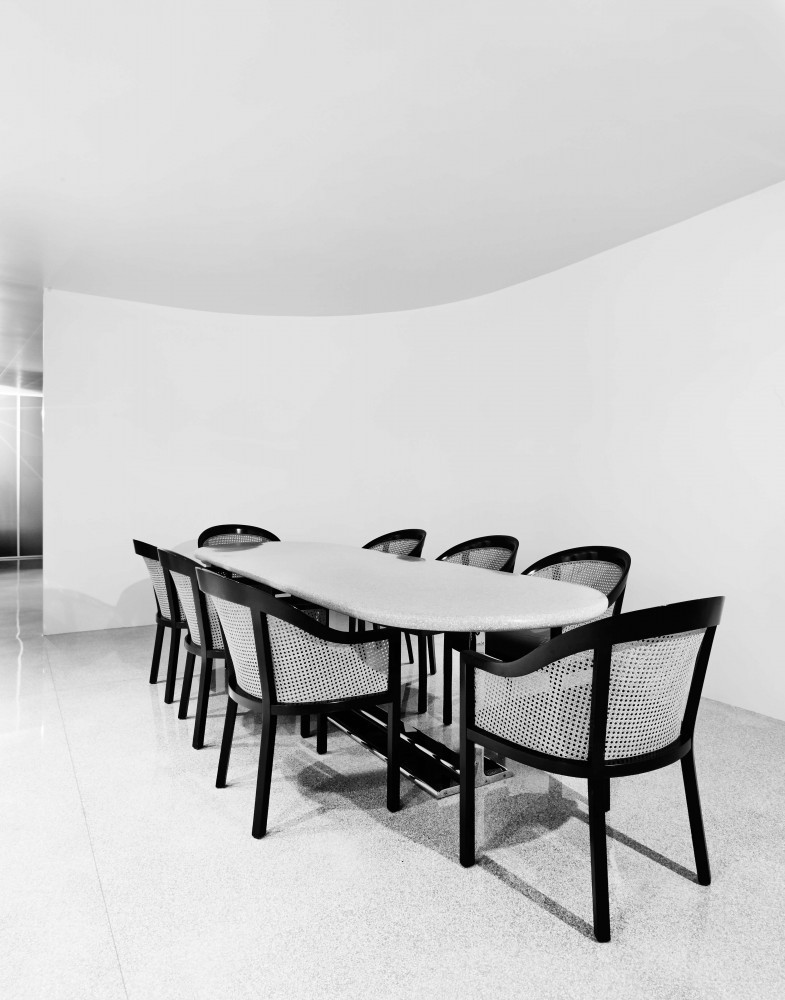 The stadium-shaped dining-table top was poured out of the same terrazzo as the floors. The Landmark chairs are still available today through herman Miller. 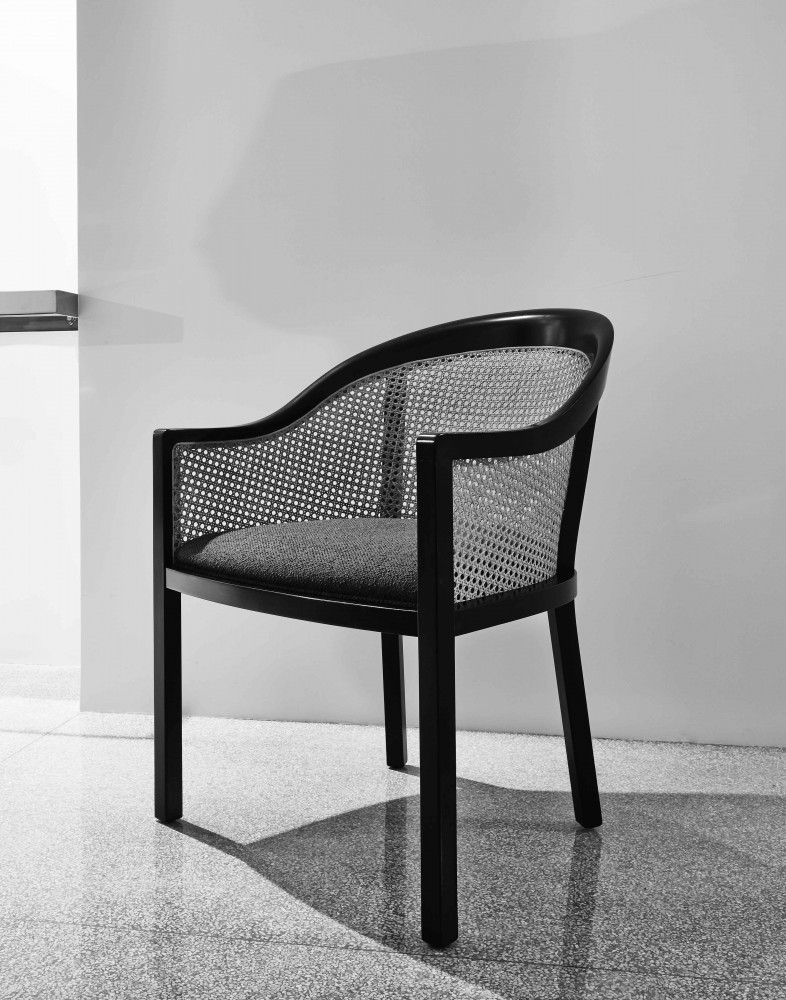 The apartment’s interiors, like Bennett’s rare caned-back version of the Landmark chair, barely have a scratch, despite being over 30 years old. 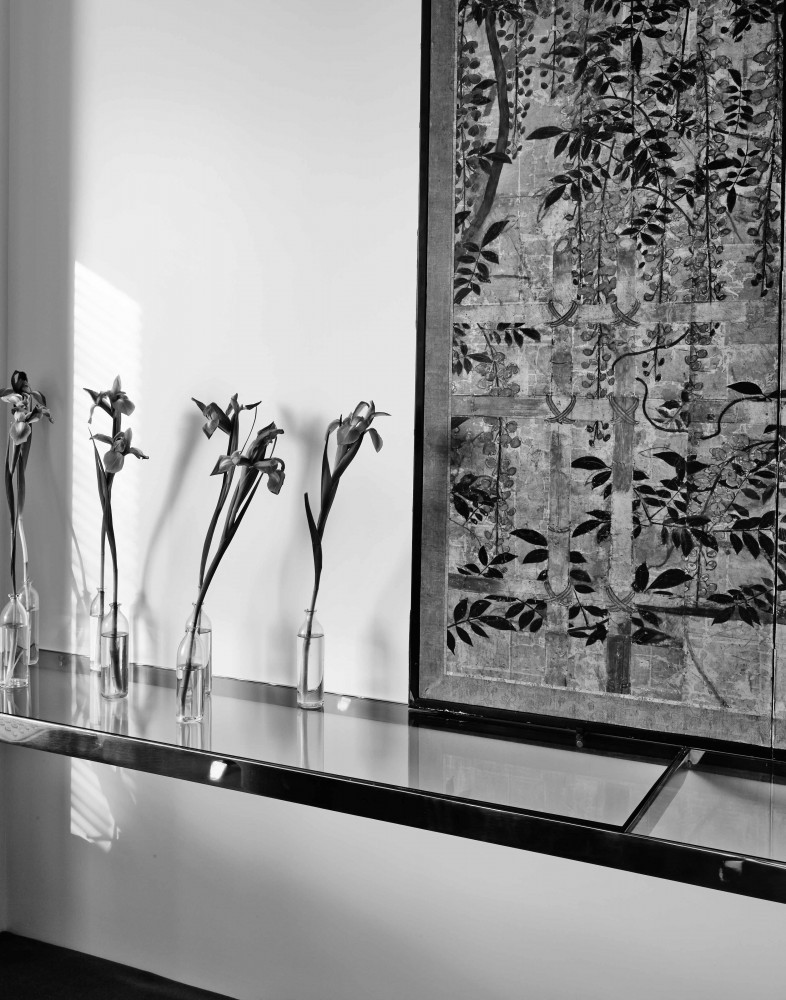 Ward Bennett’s minimalist aesthetic extended to his taste in floral arrangements, as demonstrated by these seven simple vases each graced by a single Iris. 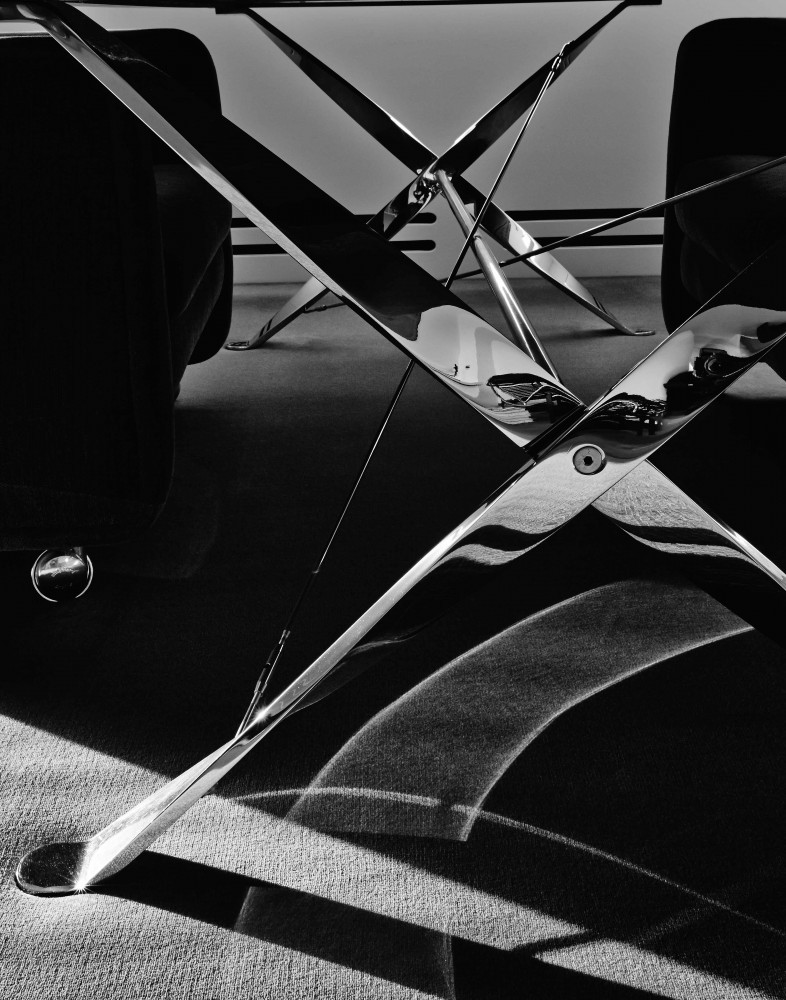 The x-legged chrome and leather desk in Reva Ostrow’s living room is said to be one of only two Ward Bennett ever made. The other was for Gianni Agnelli. 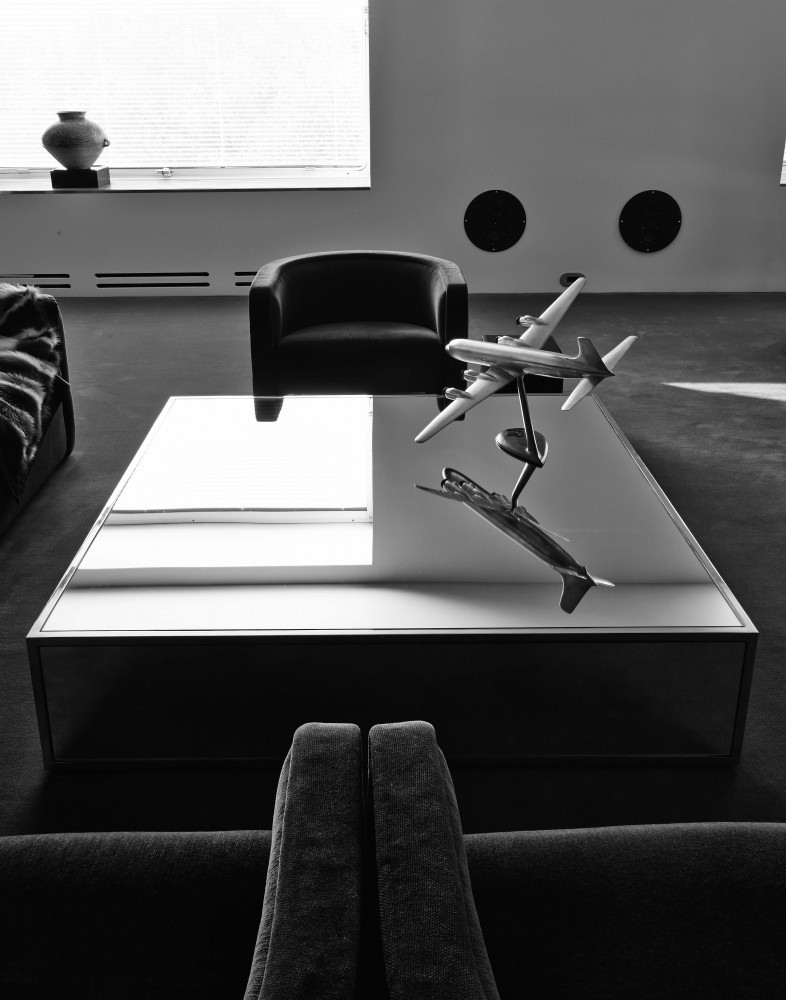 View of the living room at the apartment of accessories designer Reva Ostrow on Fifth Avenue.

In the pantheon of American design, Ward Bennett holds a unique place. Born in 1917, he dropped out of school at age 13 and worked his way up from fabric sales-boy and fashion illustrator. He later traveled all around Europe, took sculpture classes with Brancusi in Paris, and studied with Abstract Expressionist Hans Hofmann. By the time he died, at the age of 85 in 2003, he had a long career to look back on, having designed over 150 chairs, worked as an interior consultant to corporate architecture firms like Skidmore, Owings & Merrill, and amassed an address book of high-profile clients that included everyone from Gianni Agnelli to David Rockefeller. Bennett, whose prolific oeuvre remains a well-kept secret, was a Modernist at heart, but was nonetheless no comfort-eschewing stoic. In fact he had an uncanny knack for imbuing monochromatic schemes and industrial materials (the I-beam table was one of his signature pieces) with an elegant sense of coziness. He was also known as a relentless perfectionist with a reputation for being difficult. When, in the late 1970s, accessories designer Reva Ostrow, head of the eponymous handbag empire, sought out Bennett to redesign her Fifth Avenue apartment, he interviewed her five times. Bennett eventually complied, and Ostrow thanked him for it by preserving his interiors in pristine, museum-worthy condition. “Ward was a genius,” says the now octogenarian Ostrow, visibly proud of her 2,500-square-foot Gesamtkunstwerk overlooking Central Park, whose doors she opened exclusively to PIN–UP. “Hiring him was the best thing I’ve ever done in my life.”