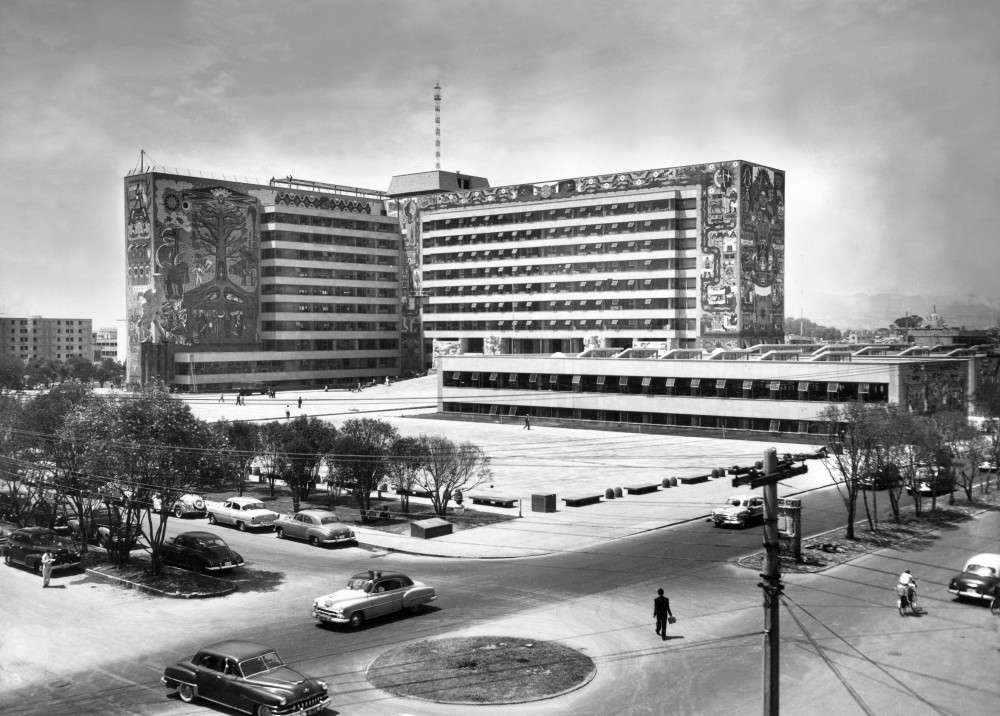 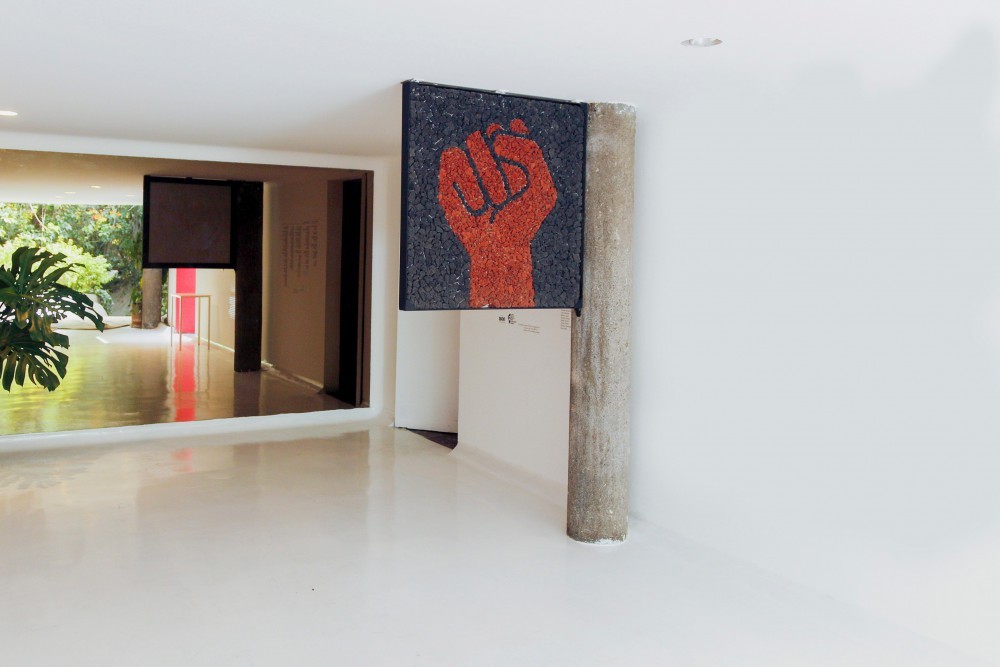 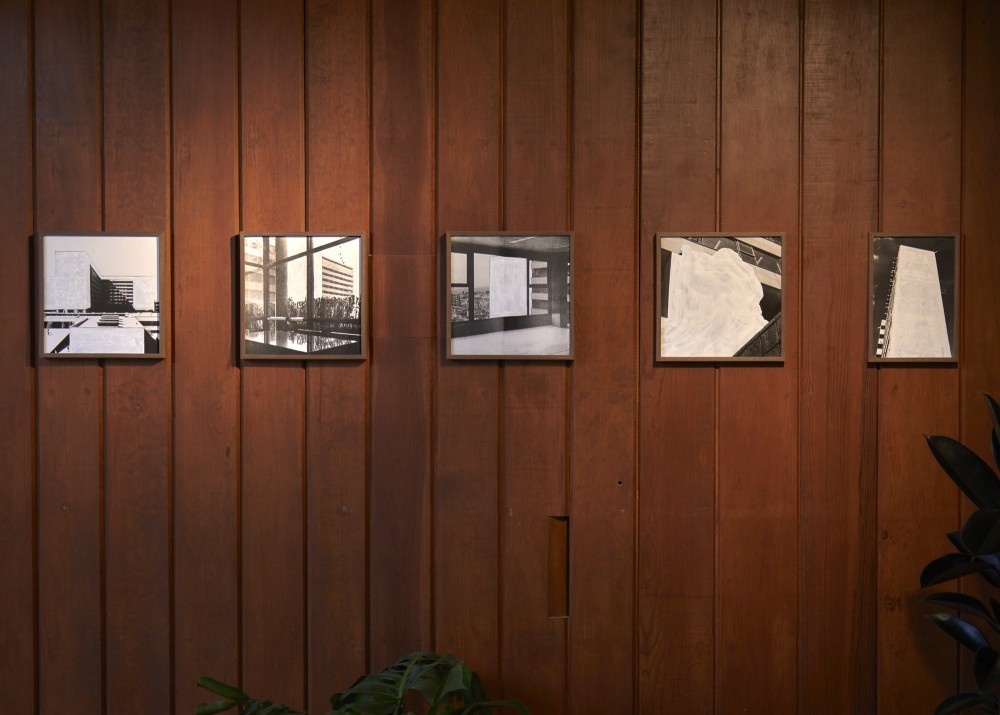 Isauro Huizar, Ausencia plástica (Pictorial Absence); acrylic and inkjet print over cotton paper, 11.81 7.87 in. Photo: Sergio López.
Series of pictorial interventions on historical photographs of the SCOP building, partially emptying the facades and surfaces of the buildings of their contents. 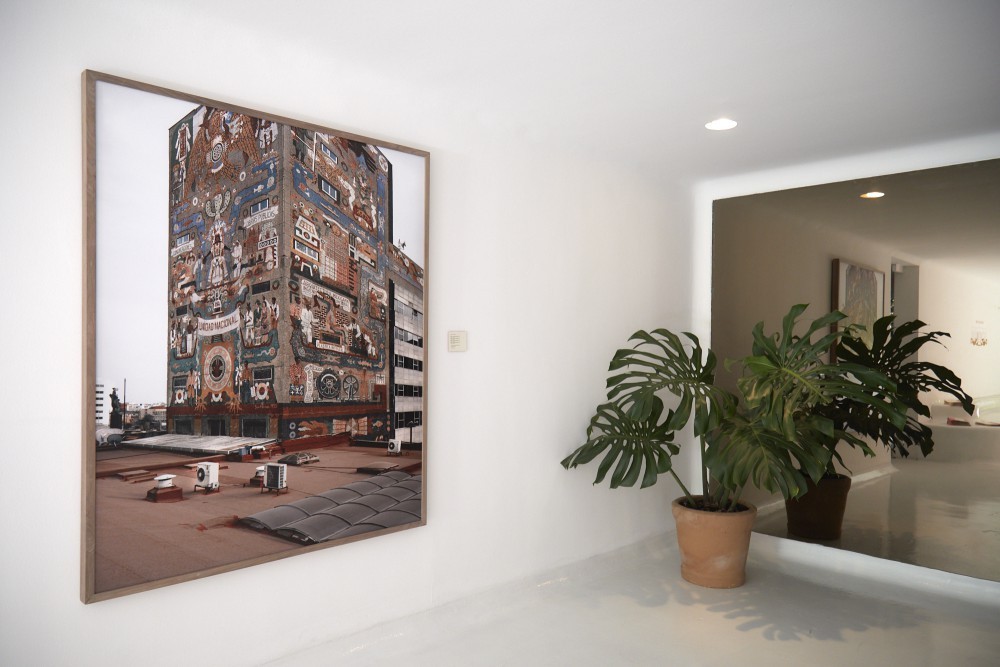 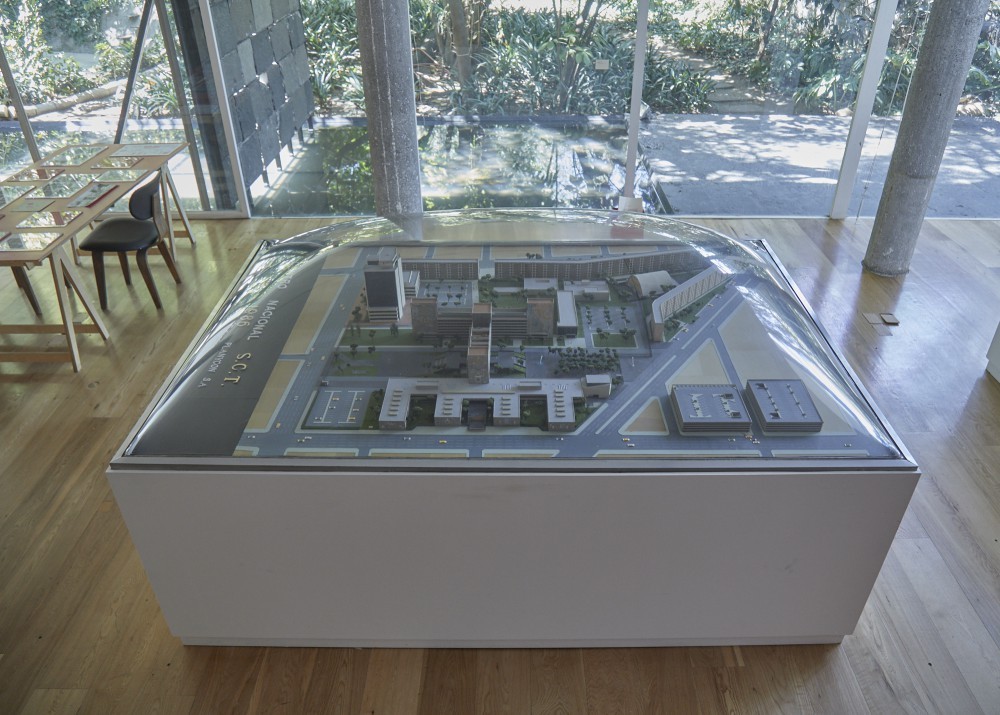 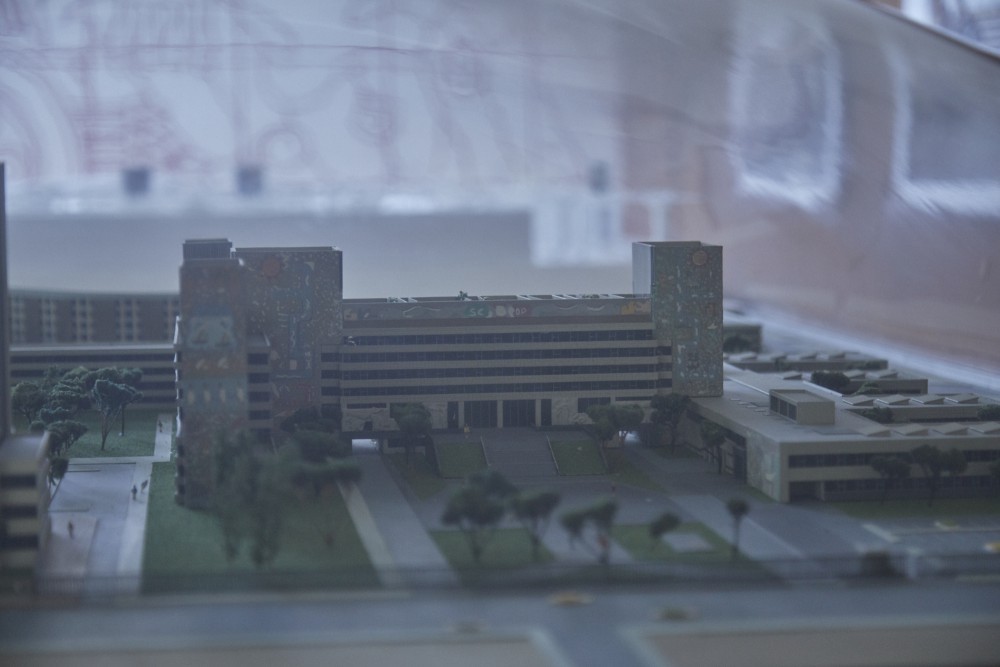 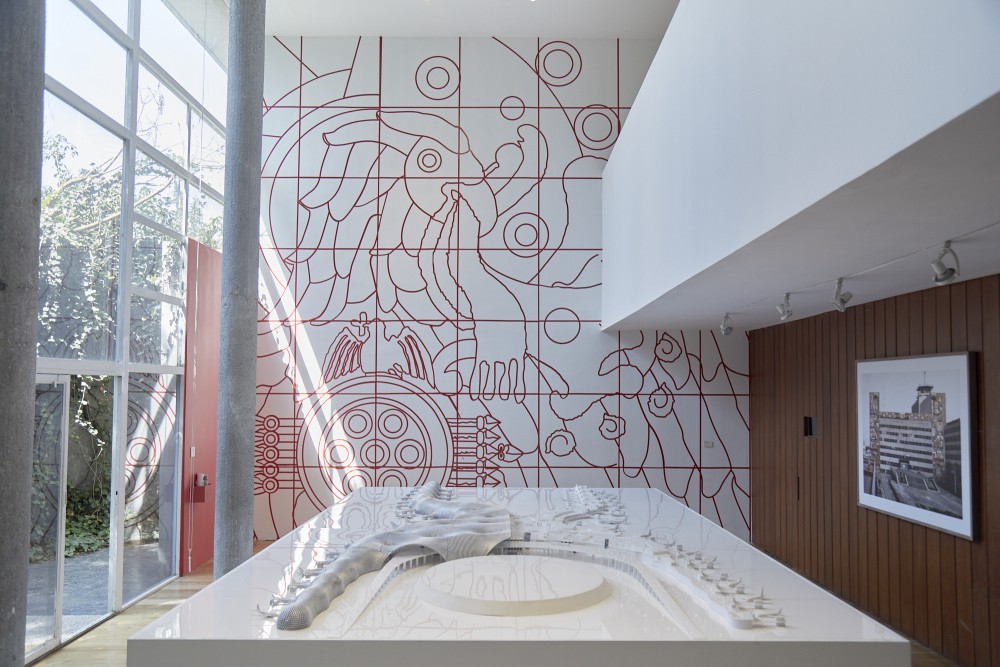 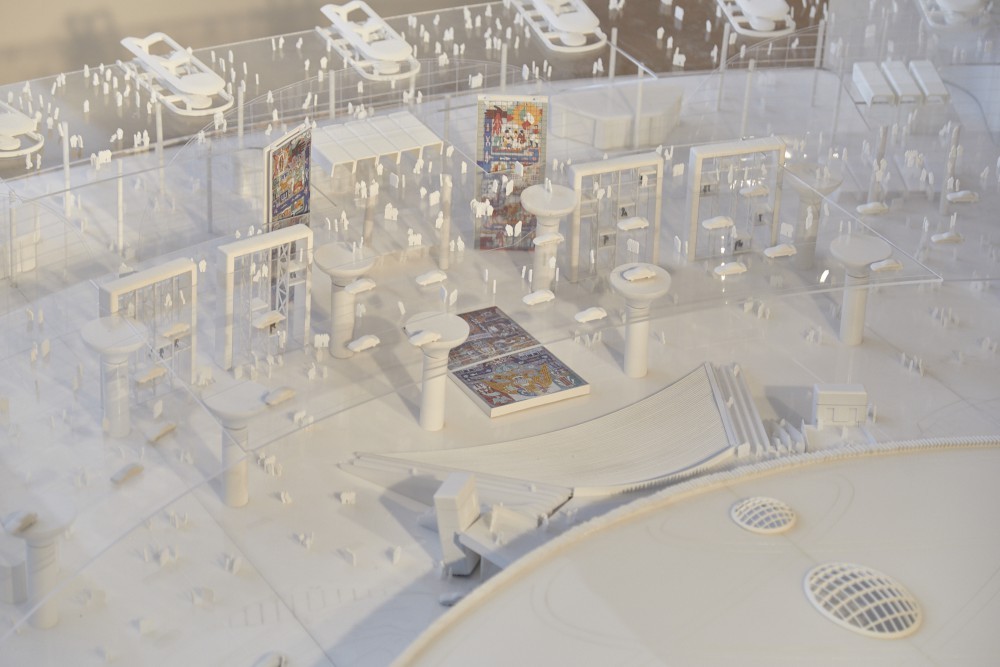 Fernando Romero Enterprise, Proposal of relocation of the murals and sculptural assemblies of the former SCOP Center to the New International Airport of Mexico City. Scale model. Photo: Sergio López. 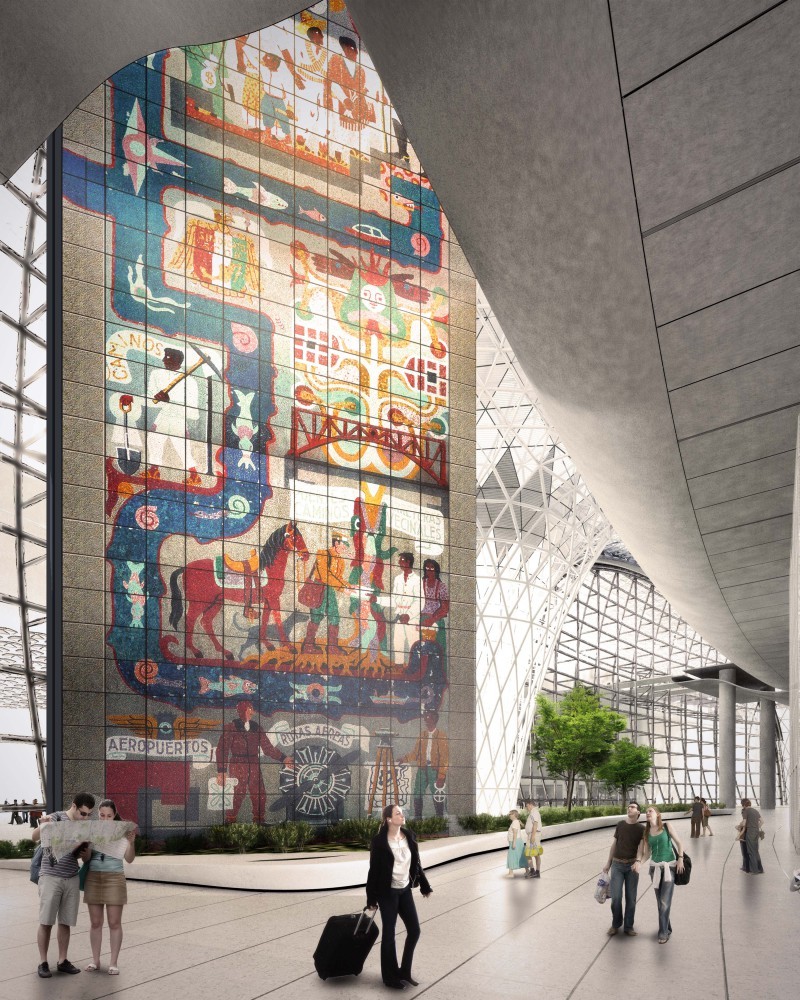 Fernando Romero Enterprise, Proposal of relocation of the murals and sculptural assemblies of the former SCOP Center to the NAICM. 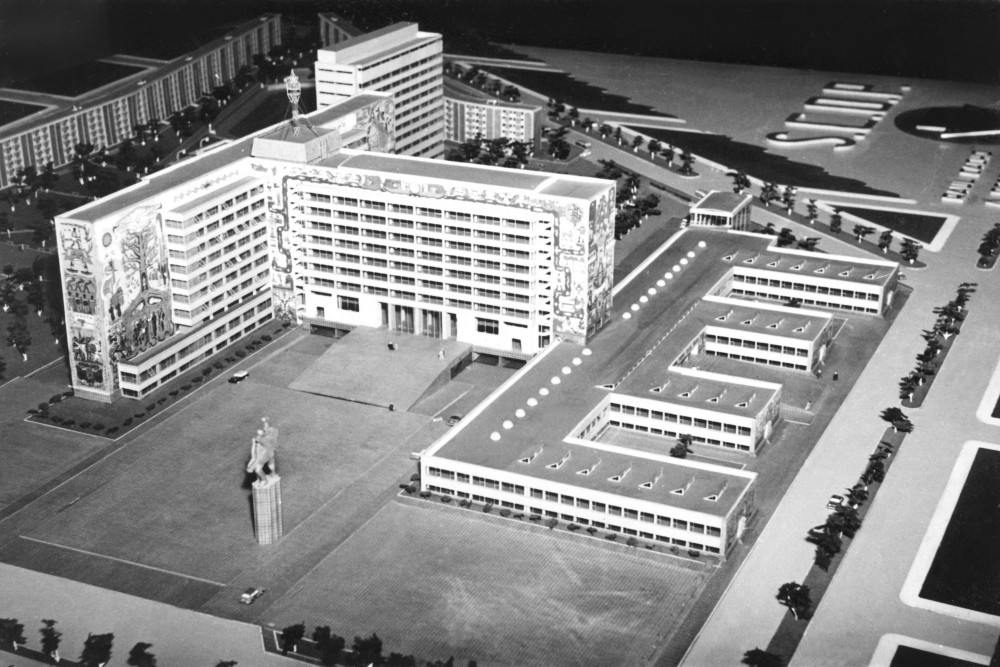 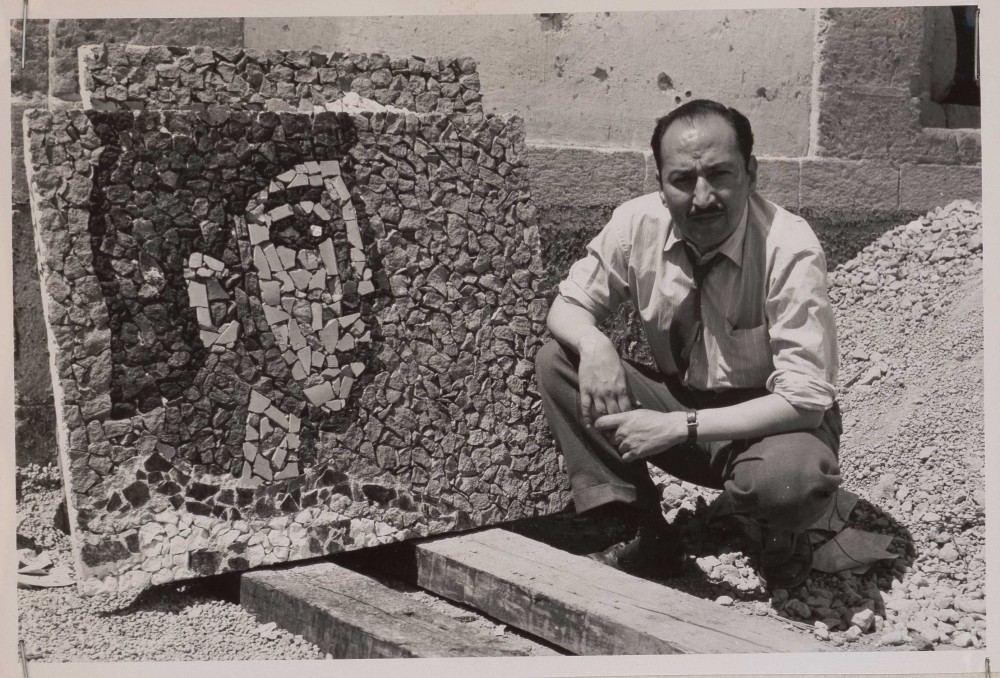 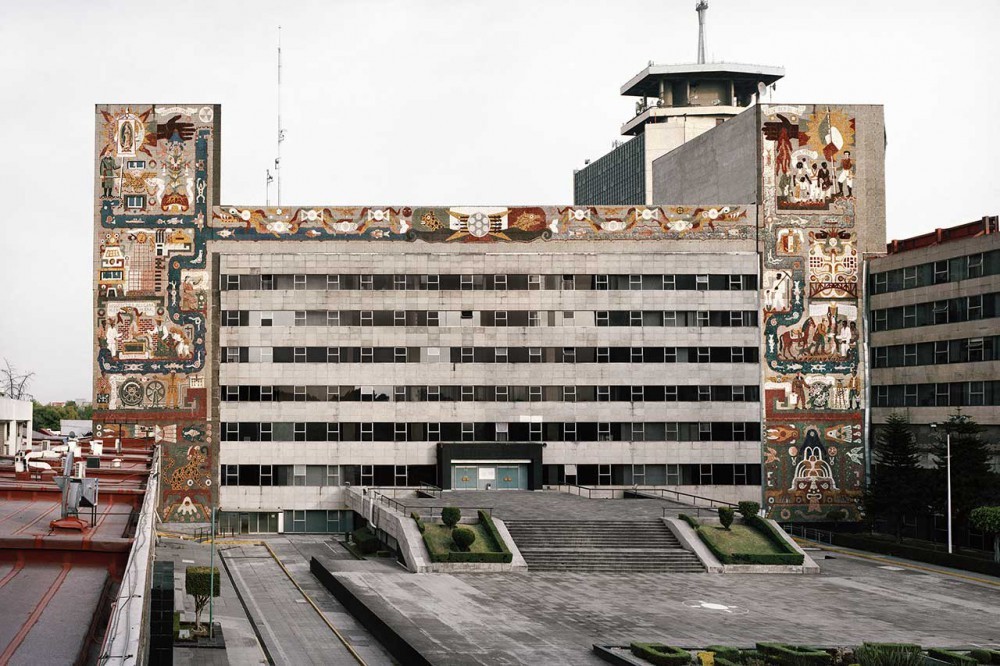 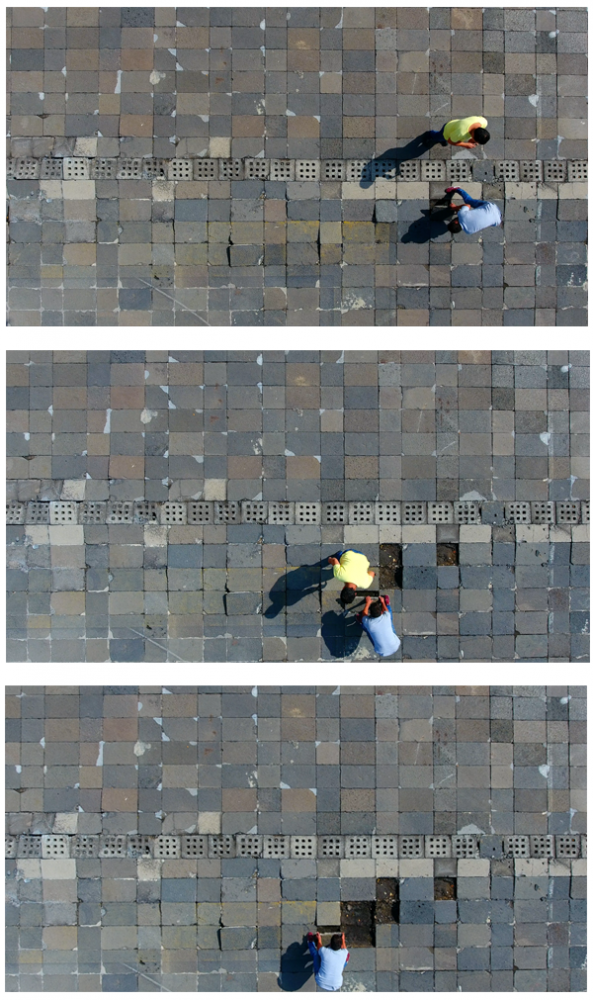 For Mural (2017), Tercerunquinto (Gabriel Cázares, 1978 and Rolando Flores 1975, Monterrey, Mexico) rescue a series of stone slabs that were detached from the esplanade of the SCOP Center during the earthquake on September 19, 2017 . Digital reproduction. Courtesy of the artist. 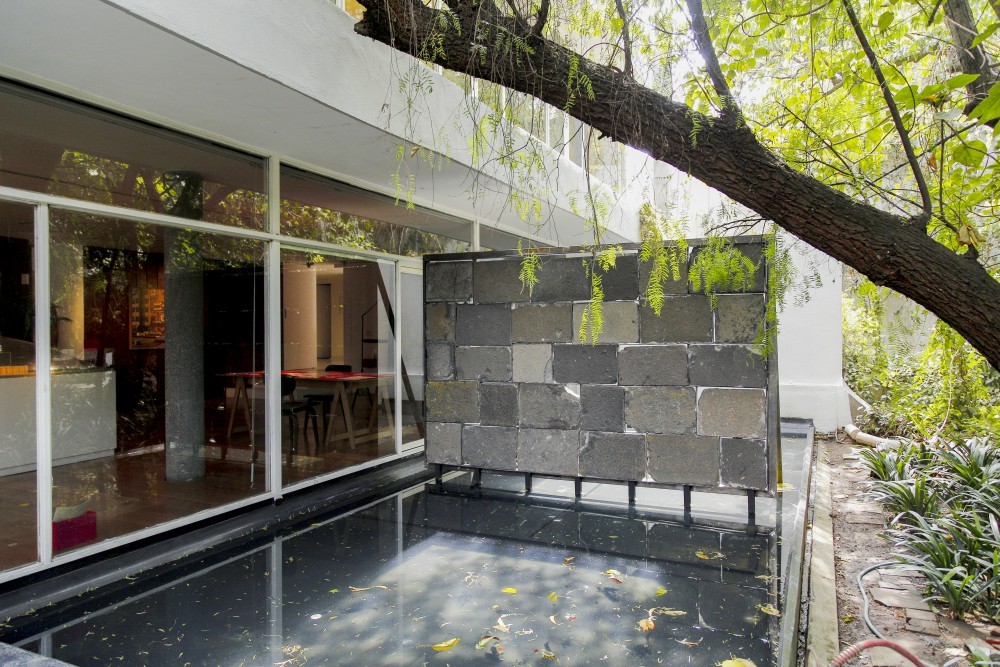 Sitting atop three of the planet’s largest tectonic plates, architects and engineers in Mexico have long been wrestling with the aftermath of several sporadic yet devastating earthquakes. The question then, isn’t just a matter of how to prepare safer, more stable housing for communities—but what will Mexico, a place known for muralism since the 20s, do to preserve its cultural landmarks from repeat destruction so the heritage and memory of its people isn’t erased in the ruins?

In Mexico City, design firm and museum Archivo explores this conversation in their third exhibition ‘Centro SCOP’. One of the country’s most prominent architectural sites, the federal building known as the Secretariat of Communications and Transportation (SCOP), is recognized for its modernist lines and breathtaking murals, designed by Carlos Lazo with Augusto Pérez Palacios and Raúl Cacho in the mid-1950s. Covering a total area of 65,000 sq ft—the cultural emblem commissioned 15 monumental murals from 20th century artists Juan O'Gorman, José Chávez Morado, Arturo Estrada, Rodrigo Arenas Betancourt and Zúñiga, among many others. Damaged from the earthquake of September 19, 1985, reconstruction efforts were made on the murals until last year, on the exact date of the event’s 37th anniversary, a second one hit the city. The disaster left the sound completion of SCOP’s structural permanence, along with that of several other important buildings, in a state of uncertainty.

Sparked from a conversation with Archivo’s founder Fernando Romero of architecture firm FR-EE, and artist Pedro Reyes—the show is ultimately a research presentation on 21st century design solutions during times of crisis, exhibited in the contemporary artworks of Isauro Huizar, Pablo López Luz, Tercerunquinto and Virginia Colwell. These include a series of recent and historical photographs of Centro SCOP, a rendition of its murals, collected key notes on urban planning and impermanence, and a series of stone slabs detached from the site following the earthquake of September 19, 2017. The show also includes a proposal from FR-EE to relocate what’s left of the murals to the New Mexico City International Airport (NAICM)—the firm’s current project with Foster + Partners, where it would live and once again be part of Mexican society.

Mario Ballesteros, Archivo’s present Director and Chief Curator for the last 3 years, chatted with me for PIN—UP about the museum’s mission, its current exhibition (ongoing until April 28, 2018), and rethinking the cultural implications of rescuing heritage sites like Centro SCOP.

Centro SCOP is only the third exhibition of the ARCHIVO(S) series. Can you tell me about your previous two?
Archivo’s series started in 2015 with a show curated by Pablo León de la Barra (who's a trained architect but has been a contemporary art curator for the last year) at the Camino Real Hotel. We wanted to take on overlooked projects of Mexican modernity and do archival research-based shows, but from the perspective of contemporary art. So the Camino Real was actually like a tiny modern art museum when it opened—with original artworks by Calder, Goeritz, and Anni Albers.

Many of these artworks were lost, and the show tried to reconstruct the merging of art and architecture. The second show in the series was curated by artist Mario García Torres, focusing on an obscure project called The Dynamic Museum (Museo Dinámico). In the 60s before Mexico had its Modern Art Museum, a group of renegade abstract artists and performers set up a pop-up museum in 3 different non-conformist houses belonging to a not so well known architect named Manuel Larrosa.

The show reconstructed the memory of these ephemeral interventions and filled in the gaps with original artworks by Mario because there was no archive, and most of the artists who were still alive didn't really recollect what they showed, etc. That's why the show was called The Party Was Yesterday and No One Remembers Anything.

What differentiates this show from the others? And are any murals from Centro SCOP being displayed?
This exhibition is different from the other two because it was a quick response to a very pressing condition, which was the September 19th earthquake here. So we tried to do some quick research and speculate more about the future than dwell on the past of a XXth century project.

There are no actual murals or fragments from the SCOP building in the show since they are protected. So, we tried to go around bureaucracy and bring fragments and pieces of history that we could work with quickly. We have a 1:1 scale diagram on the wall, and a new piece by artist Pedro Reyes which uses the same 1x1m modules and stone mosaic technique as the original murals. We have lots of archival material and also a new mural created by Tercerunquinto, with 40 stone plaques from the main plaza in front of the building, and aren’t protected. Those popped out of the ground in the last earthquake.

What can visitors expect to summarize the most about this exhibition?
The show really tries to think about preserving modern architecture in a state of urgency and has a different reading of modern Mexican heritage. We have 5 original artworks all dealing with different approaches and aspects of the building, the architecture, and the murals. And the proposal by FR-EE Fernando Romero, which is to move the murals from the SCOP building (which will most likely be demolished although there is no official position yet) to the New Mexico City Airport, because the murals where actually made in these 1x1m tablets.

Will the building/new site of the murals be an extension of Archivo, or be its own entity? And why the airport?
Offsite, and then taken to the current building so they could be removed and taken somewhere else—6,000 of these 1x1 tablets. There is no existing building that could spare 65,000 sq ft of surface for stone murals, but the new airport could easily house them in terms of space. That idea came from a conversation between Pedro Reyes and Fernando which sparked the whole show.

How likely is Fernando’s proposal to be approved?
It’s very speculative and we are only throwing the idea. But because the airport is also under the wing of the Communications and Transportations Ministry (Centro SCOP is their headquarters, so they are the current owner of the murals), and the airport is a federal building, we think something could happen.

But it would have to go over a super long process of evaluations, technical studies, and the National Art Institute which protects the murals.

Do you think there’s a link between the two earthquakes of September 19, 1985 and 2017? Or, do you hold any personal beliefs (spiritual, religious, metaphysical or otherwise) about those events?
It's a crazy coincidence. The September 19 earthquakes, they make you wonder. I think there’s under a 1% chance of something like that happening on the exact same day. But again, this is Mexico. The most surreal place on the planet.

Tell me more about the importance of Mexican heritage through its architecture, especially with sites like SCOP?
We think it’s a conversation that is urgent in its own right. There are over 1,000 heritage buildings damaged from the earthquake. Mostly colonial buildings in Morelos and Oaxaca, but lots of XXth century architecture with historic value as well. The SCOP Center is the largest, most visible, and probably the most valuable because of the murals and sculptures. It also has symbolic weight in utopian XXth century Mexican planning.

How do you plan on continuing this conversation once the exhibition is over?
We’re planning on a monthly program of talks and workshops around the issue of preserving XXth century architectural and artistic heritage in a context of crisis/urgency. In terms of the Archivo series, the upcoming show (Feb 2019) will focus on Four Women, all key figures in Modern Mexican Architecture, like Ruth Rivera, Clara Porset, Frances Toor and Helen Escobedo.