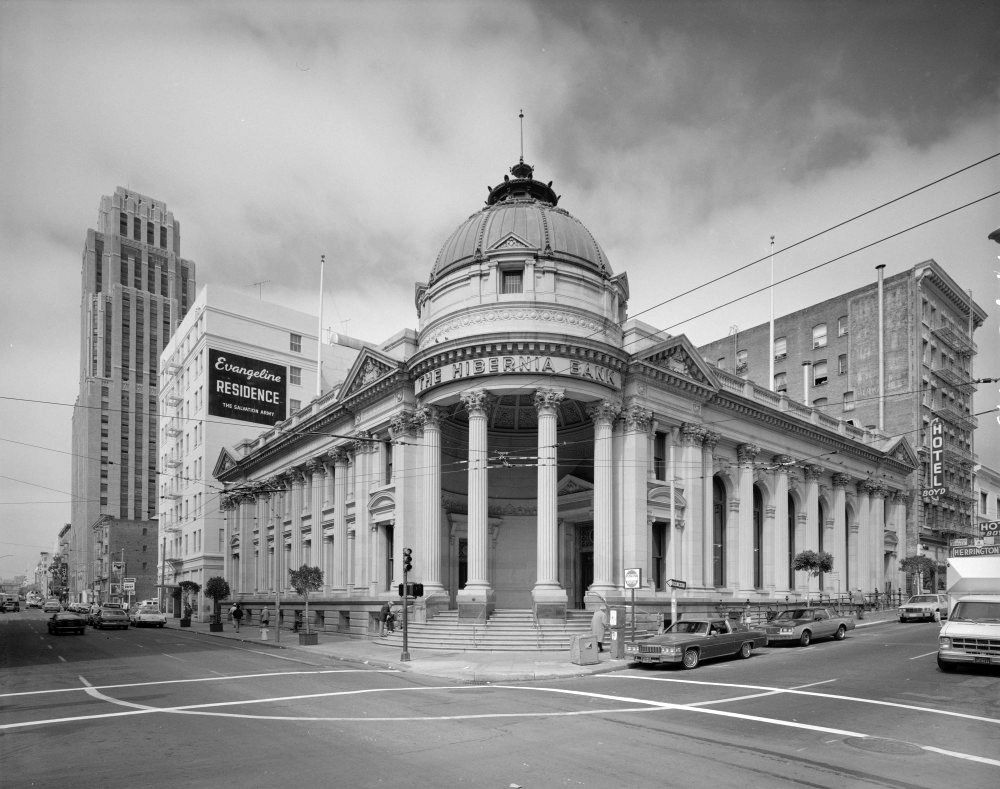 1 Jones Street circa the late 1970s when the Hibernia Savings and Loan Society still occupied the building. Photographer unknown. 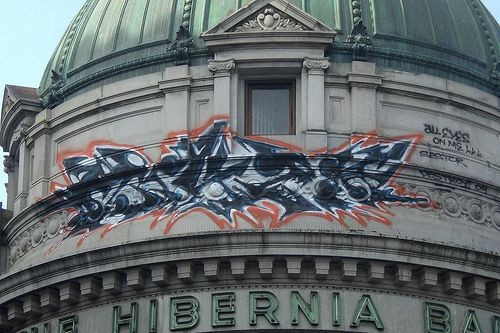 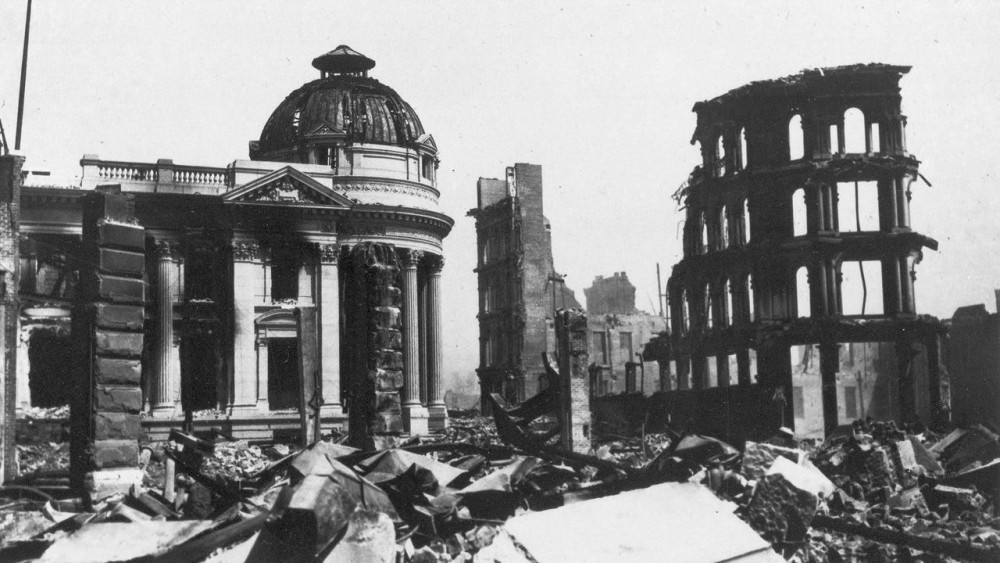 The Hibernia Bank opposite ruins of the Prager department store after the earthquake on April 18, 1906. Photographer unknown.

The Hibernia Bank building was one of the few in the Tenderloin to survive the earthquake and fire of 1906. Photography by Wilbur Gleason Zeigler. 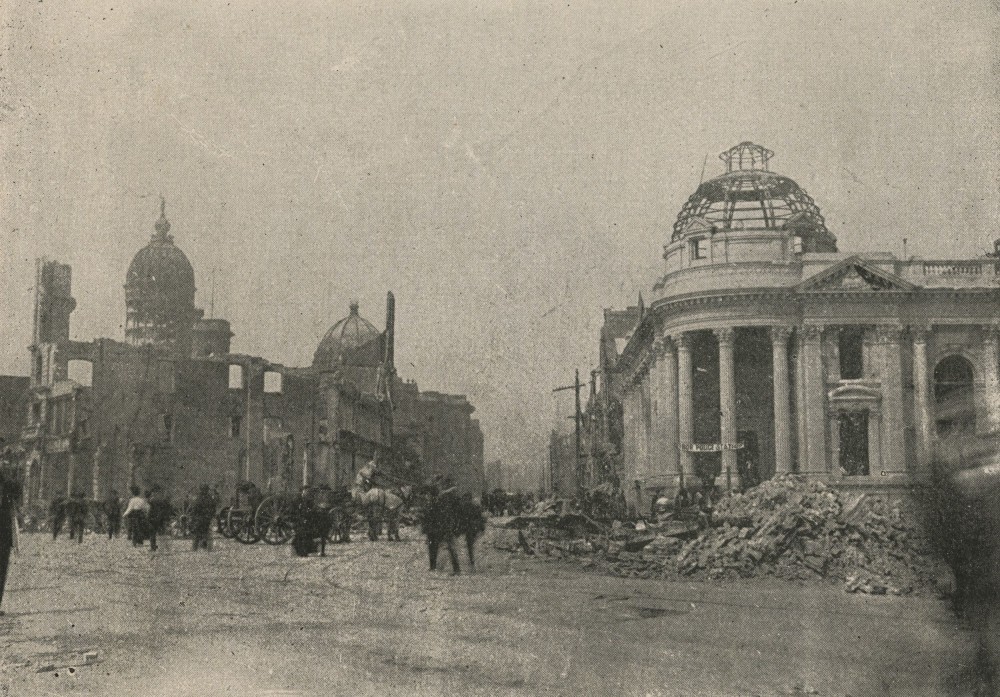 The aftermath of the 1906 San Francisco earthquake captured by Wilbur Gleason Zeigler and published in his book The Story of the Great Disaster. 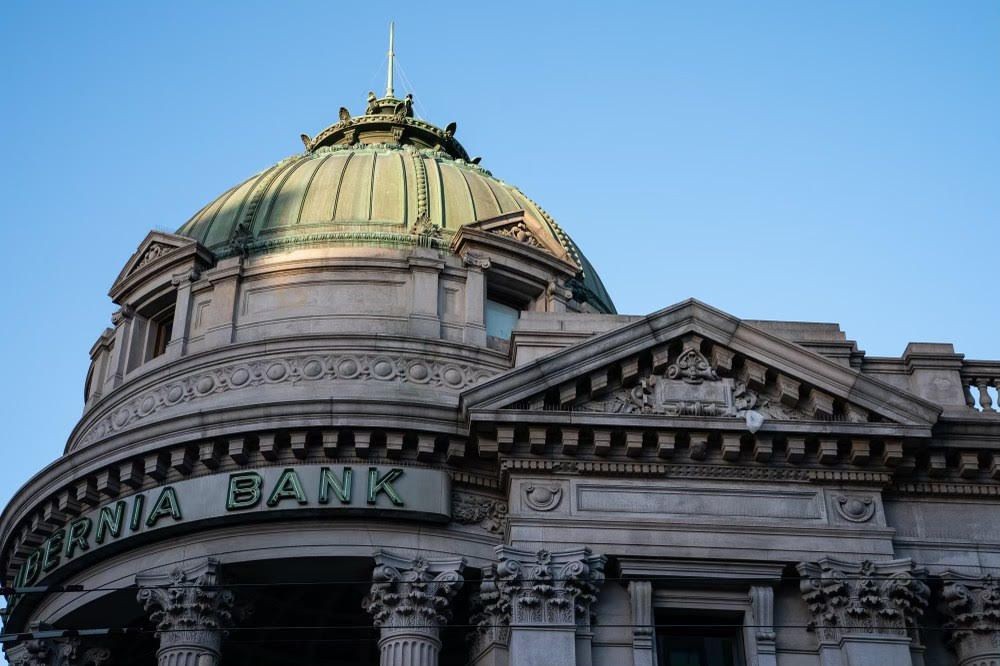 The Hibernia Bank building in San Francisco’s Tenderloin photographed in 2021 by Humberto Liechty. 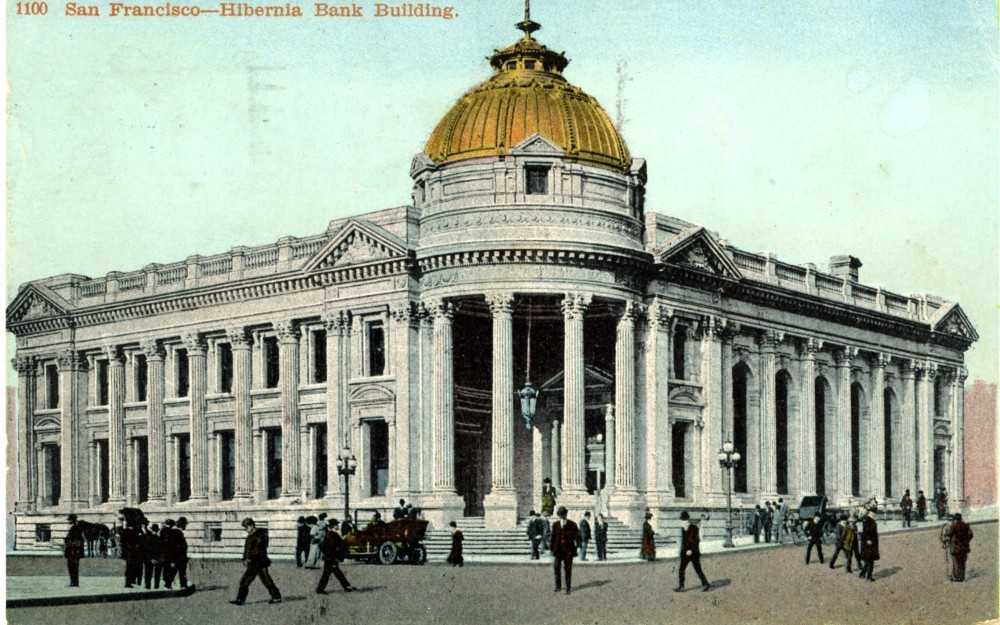 A postcard featuring the Hibernia Bank Building designed by Albert Pissis in 1892. 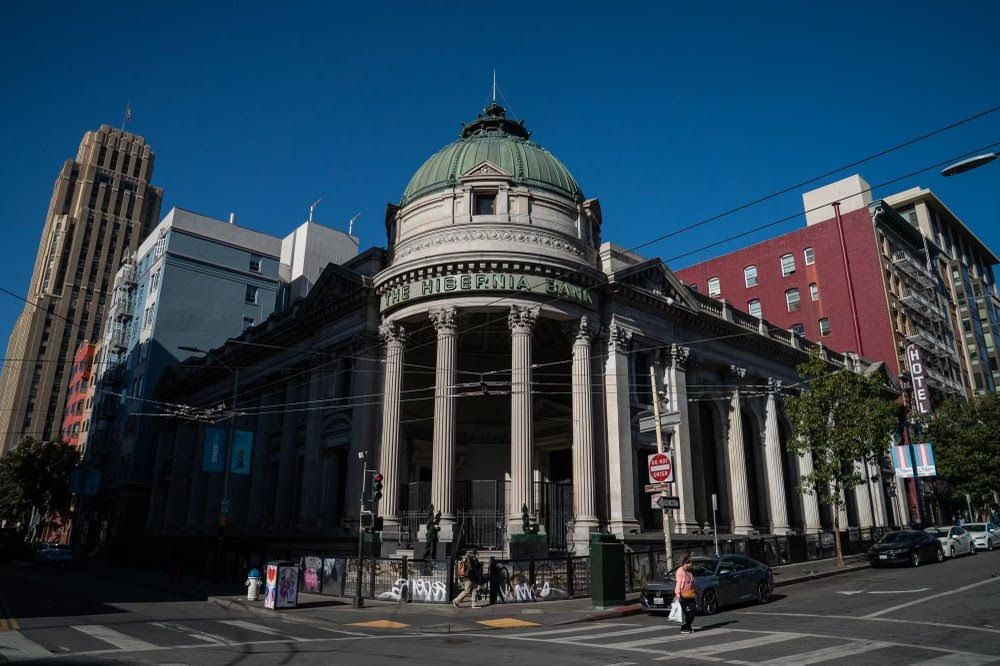 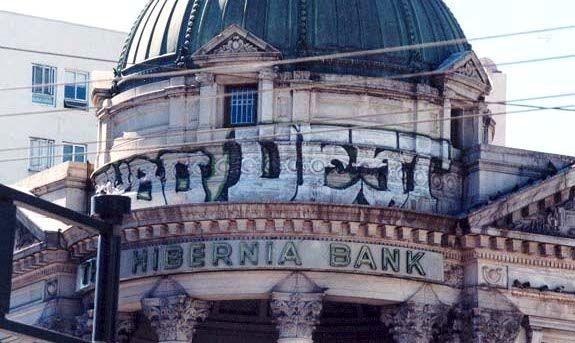 San Francisco still shocks, but not in the way it once did. In this pandemic moment, while the racialized divide between rich and poor gapes ever wider, the vertiginous leap from urban squalor to spectacular wealth is more jarring than ever. Consider the Mid-Market area where, in the shadow of the Beaux-Arts rotunda of Arthur Page Brown Jr.’s City Hall and the surrounding Civic Center district, San Francisco’s contradictions are set out in sculptural relief. The bombastic remnants of top-down planning in a hastily-rebuilt precinct after the 1906 earthquake and fire, the City Hall and Civic Center represent one of the only full executions of the City Beautiful ovement in San Francisco — a reform philosophy of the 1890s and 1900s that sought to “beautify” the American polis through monumental grandeur. Another example of the movement, which typifies what has generally become of its legacy, is architect Albert Pissis’s 1892 Hibernia Bank building, on the tattered fringes of the gritty Tenderloin district, just north of Civic Center.

Pissis’s sepulchral bank building pins down the corner of Jones and McAllister, a radial intersection just off Market street, where the homeless and rival drug dealers jostle among the stands of a daily farmers’ market. Although San Francisco never adopted Daniel Burnham’s 1905 masterplan, the vestigial remains of the City Beautiful movement assert their place among the chaotic jumble of the laissez-faire city. Within that context, Pissis’s building, quickly nicknamed the Paragon by fellow architects and fans when first unveiled, inaugurated the full-blown Beaux-Arts style on the West Coast. Mexican-born Pissis (1852–1914) was the first San Francisco-raised architect to be trained at Paris’s École des Beaux Arts, and with the Hibernia he brought back to the Barbary a robust and elegant expression of Second Empire eclecticism, its Italian-Renaissance quotations combined in a composition of typically Haussmannian massing. Though not free-standing, the domed entrance rotunda that turns the corner in classic Parisian style can trace its roots back to the mother of them all, Bramante’s Tempietto at San Pietro in Montorio, Rome.

A devotional chapel built over the purported site of the crucifixion of St. Peter, the Tempietto was begun in 1502 at the behest of the Spanish sovereigns Ferdinand and Isabella as testament to their piety and special relationship to the church: in 1494, Pope Alexander VI had conferred on them the title of Catholic Monarchs in recognition of their defense of the Catholic faith within their realms. Among their actions was the completion of the Reconquista, when they defeated and expelled Muhammad XII, the last Nasrid ruler of the Emirate of Granada, in 1492 — the same year they financed Columbus’s first transatlantic exploration. With the Tempietto, the Catholic Monarchs ushered in a tacit bond between a militarized church soon to expand into the Americas and the deployment of Classical architectural form to express imperialist power. Like a little pebble thrown into the sea, Bramante’s circular chapel would radiate out in influence across the globe, just as Spanish imperialism spread outwards over the Americas, with its colonies, extraction of wealth through despoliation, and indigenous genocide, a history of which San Francisco itself was initially a part.

In the first half of the 19th century in the USA, Greek Revival Classicism was seen to embody the young nation’s democratic ideals, drawing a stylistic link between ancient-Greek and modern-American democracies. Between the 1860s and the 1880s, however, American architecture took an often eclectic and bombastic turn: quickly built, pretentious, asserting only superficial links to continental Europe’s bygone styles. By the end of the 19th century, though, as the architects of Pissis’s generation were increasingly trained in European schools, an elegant refinement emerged in buildings like the Hibernia. Three decades before Pissis designed the bank building as their new headquarters, a group of Irish businessmen founded the Hibernia Savings and Loan Society in 1859 to provide their community with a secure place of deposit (Hibernia is the Latin name for Ireland). Through the banks nods to Gallic Classicism, Irishness was ennobled through wealth, particularly in the pot-bouille of 19th-century San Francisco’s ethnic heterogeneity.

Like the Bank of Italylater to become Bank of Americathe success these Irish- and Italian-American banks reveals that whiteness and respectability could be won through wealth and political clout, embodied by the Beaux-Arts bombast of Pissis’ bank. The subsequent history of the building tells a different story, though: that of San Francisco’s failure to uphold its City Beautiful plans. One of the few buildings in the Tenderloin to survive the earthquake and fire of 1906, the bank was repaired and reopened just six weeks later, and in 1908 was expanded by Pissis with an additional bay. Hibernia occupied the building until 1985, when it was acquired by another bank only to be consumed by Bank of America. During the 1990s, the SFPolice Department headquartered their Tenderloin task force in the Hiberia building, before moving to their own newly-built station in 2000. A bank acquired by another bank and a building occupied by police: nothing new in the Wild West city by the bay. But here a quick note on the Tenderloin is in order.

Like its 19th-century namesake on the westside of Manhattan, San Francisco’s Tenderloin was an openly-sanctioned vice district from the 1850s onwards. Its Beaux-Arts apartment buildings, French restaurants, popular theates, brothels, gambling houses, and department stores served a transient community of newly-arrived single San Franciscans. The city’s current hyper-prosperity is much like the Gilded Age of the 19 century, with staggering inequality marring any aesthetic delectation one might take from such spectacular urban views. The ultra-wealthy remain ensconced in their protected micro-climates, while the jaw-dropping desperation of the city’s disenfranchised roils below. The Tenderloin is one such area, a rare cluster of turn-of-the-century building stock that can probably never gentrify: built as hotels and transient housing with studio apartment and shared bathing facilities on each floor, the buildings would be hard to flip into condos, keeping gentrification at bay for now.

The Hibernia building speaks to this change in imperatives: once an elegant fortress — like all Beaux-Arts banksit is now more a memento-mori to the transience of use-value. After the Tenderloin task force vacated the building, it was purchased by a medicinal cult, who held onto it for decades and let ifall into disrepair, until in 2008 it was bought by a realty firm, he Dolmen Property Group, which by 2019 had transformed it into an event space (in 2016, Hillary Clinton held a fundraiser beneath the glass dome of the former banking lobby).Today, however, with the Tenderloin district in a pandemic-worsened crisis that has seen all its public venues close down, the Hibernia stands skull-like, boarded up and fortified, an empty palace of valuable private space in a district in desperate need of cheap housing.

But you wouldn’t know all that about the Tenderloin from the sidewalk, standing before the Hibernia at a crosswalk at McAllister, Jones, and Market. On one side, a drug crew holds down the corner, on the other the unmasked and unprotected homeless continue their peculiar urban flânerie, and the Paragon appears paralyzed in a paroxysm of uselessness: a picturesque architectural folly for Gilded Age ideas of the City Beautiful imagined, and the city manifest today.

Ted Barrow is an art historian and writer who lives somewhere between New York City snd Berkeley. While not finishing his dissertation on Gilded Images of the tropics, he critiques skateboarding online.