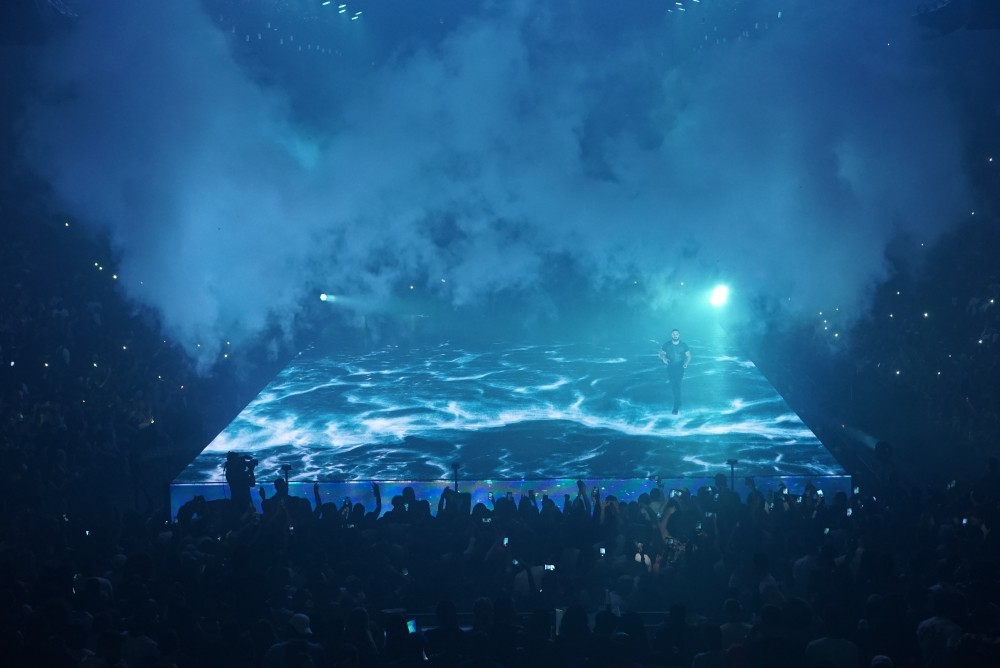 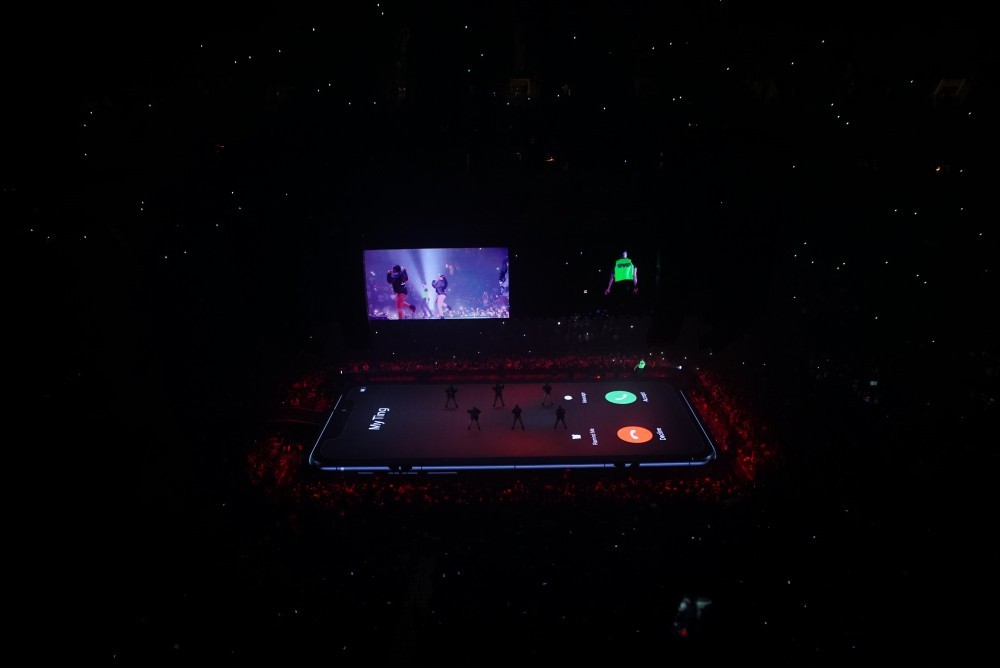 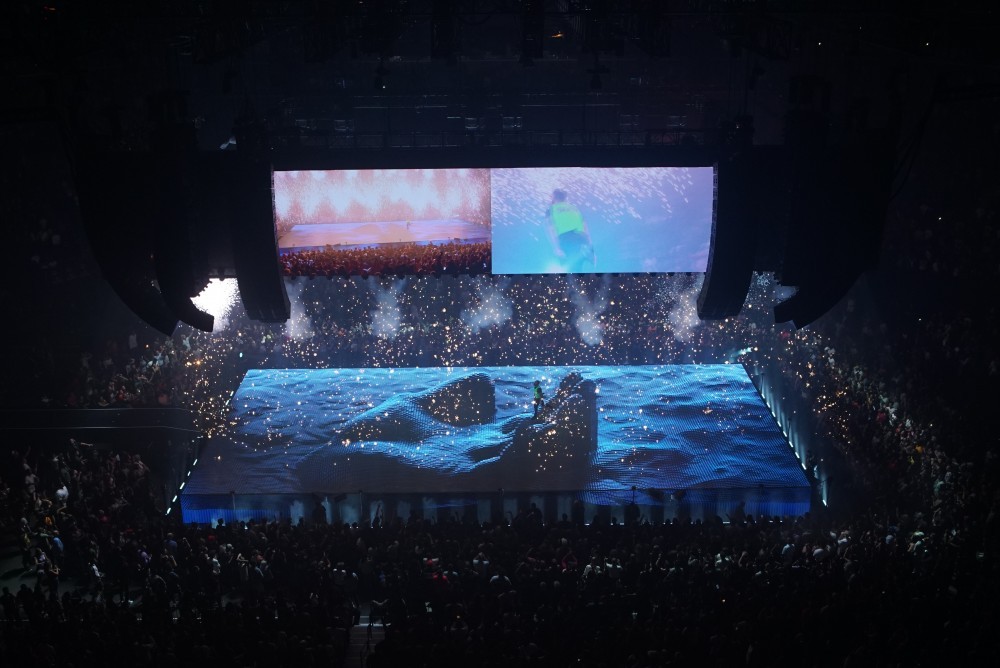 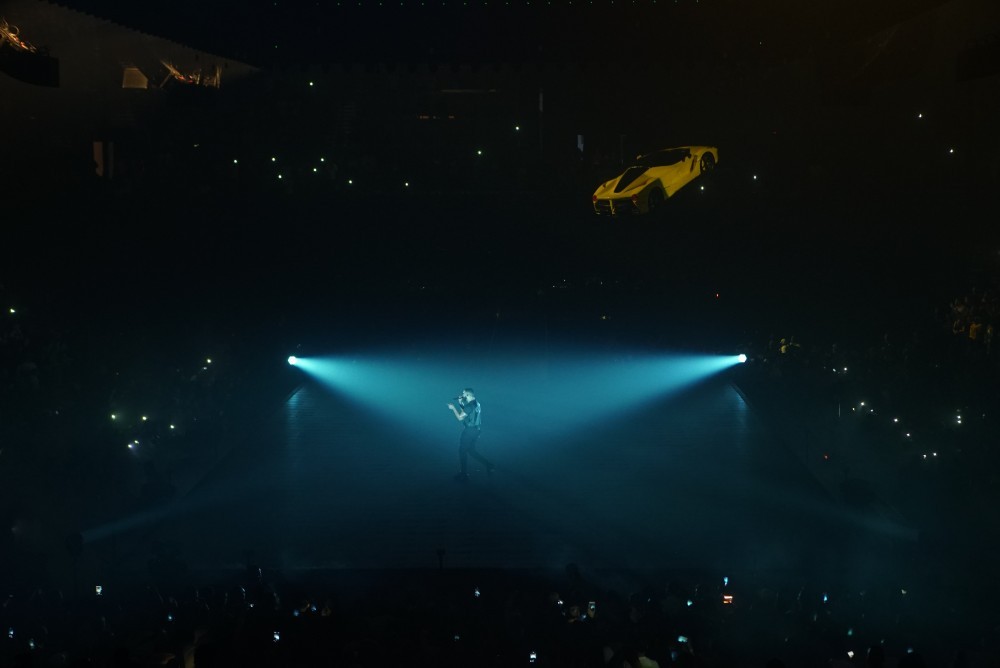 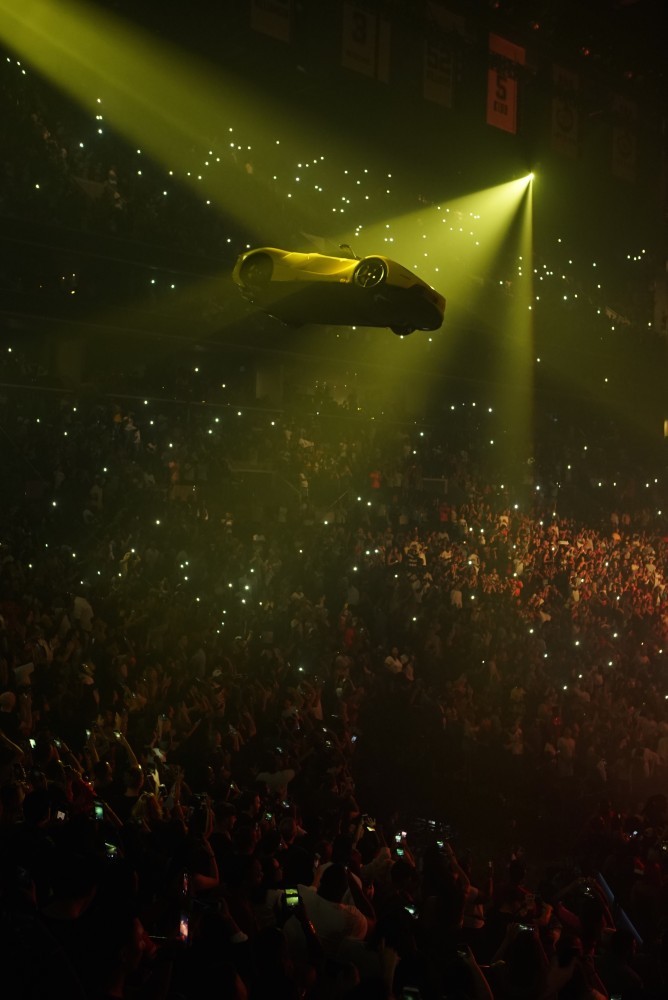 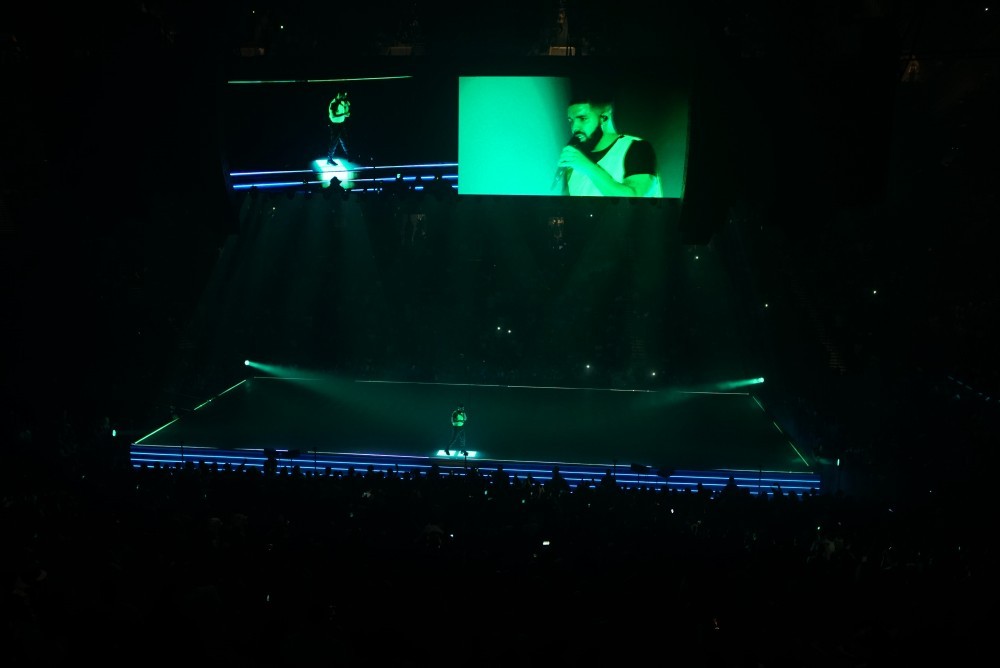 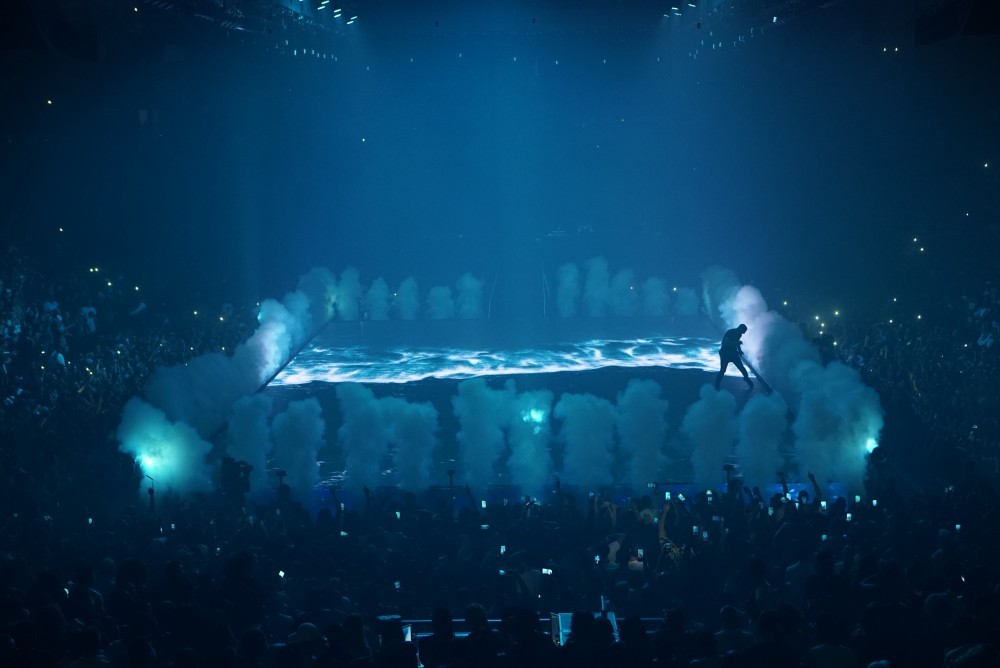 Ever since it kicked off in Kansas City on August 12, 2018, Drake’s current “Scorpion” tour (together with Migos) has been filling stadia across North America. Apart from being a commercial success the “Scorpion” tour is also setting new standards thanks to its innovative stage design. Working directly with Willo Perron, the visual wizard behind many iconic stage moments by the likes of Rihanna, Kanye West, and St. Vincent, team Drake introduces some startling effects such as a flying Ferrari and a swarm of lights (spoiler alert: they’re both drones). As for the actual stage, it is reduced to a bare minimum: an elevated rectangular block, similar in size to a basketball field. But far from being simple, the entire stage is, in fact, a horizontal screen that projects customized visuals for each song, from a basketball field (“Nice for What”) and a giant pool (“Hotling Bling”), to an iPhone display (“In My Feelings”). The deceptively simple set up is in fact highly complex, both from 3D animation standpoint as well as where the stage technology is concerned (the set-up LED floors with person-tracking effects). Perron called upon Sila Sveta, the Moscow/L.A.-based agency behind 3D visuals for the likes of Lamborghini, the Bolshoi, the Met Gala, and Shakira, among others. After attending one of Drake’s seven consecutive shows in New York City, we rang up Paulina Zakh, one of Sila Sveta’s directors, to find out more.

What was Sila Sveta’s starting point for the “Scorpion” tour’s 3D visuals?
If you look into the recent history of stage designs, there’s not a lot really great original visuals out there. Most people use existing footage — the easy stuff — not original 3D. When Willo first contacted us, the idea from Drake was to do a stage that looks like those 3D visuals they show during NBA interstitials.

So the basketball court, which is one of the visuals for the show, was also the original reference?
Yes. Drake is a huge basketball fan and that was the original reference for the stage, even if it evolved a lot throughout the two months that we worked on it. It’s interesting when you have such a huge stage — some things you’d imagine would work turn out not at all what you thought they would be. And other things that we thought were too simple ended being incredibly beautiful. Like the swimming pool scene.

The water scene (for “Know Yourself” and “Emotionless”) was incredible.
It’s funny how the really simple things work, like lava or water. I say it’s simple, but from a 3D-modeling point of view, it’s not a simple visual to do at all. The water was totally simulated and it takes quite some time to do it realistically.

During some tracks (e.g. “Energy”) there was kind of vertical hologram around the stage. How did that work?
It’s basically just a scrim, like a mesh curtain, which we used to project these holographic moments.

The interesting thing about that was the fact that when the scrim was up I found myself looking at the screen more than I was looking at the actual show because the hologram looked even better on camera than it looks in real life. Not that it looks bad in real life. But it made me wonder how you factored in the video recording and the photography into the design of the visuals?
We’re living in the time of iPhones, and when we create the show, anytime we work with visuals, we do think how that will look on screen. Will that work with the camera? How will the light reflect there? The lighting design was also something we were talking about. When lighting comes in it kills the projection so the choice of LED was pretty obvious. You need to think of the show all together.

Did Sila Sveta work with a special technology for this show that you hadn’t used before?
We worked with a program called BlackTrax with Notch. It’s a person-tracking software that allows us to create interactive moments. We can track Drake — or anyone — where he’s positioned on the stage and align the visuals based on where he is. I haven’t seen this kind of thing on this scale or on this kind of production.

You used this for the giant disco floor during “Don’t Matter To Me”?
Yes! And also for the broken hearts during “Fake Love” and another song, “Energy,” when a glacier appears to be breaking under him. We made the ice interactive so he walks around on this very big LED floor around the ice breaks underneath him and it’s controlled in a way we couldn’t have done with other technologies previously.

Of all the song and visual combinations in the show, which ones were your favorite?
Oh my god. That’s so hard…I loved “Nonstop” from Scorpion — love it. And I absolutely loved how “Know Yourself” worked with the water visuals and the way it worked with light and air and when the beat drops the visual drops like this massive wave. But really I love them all.