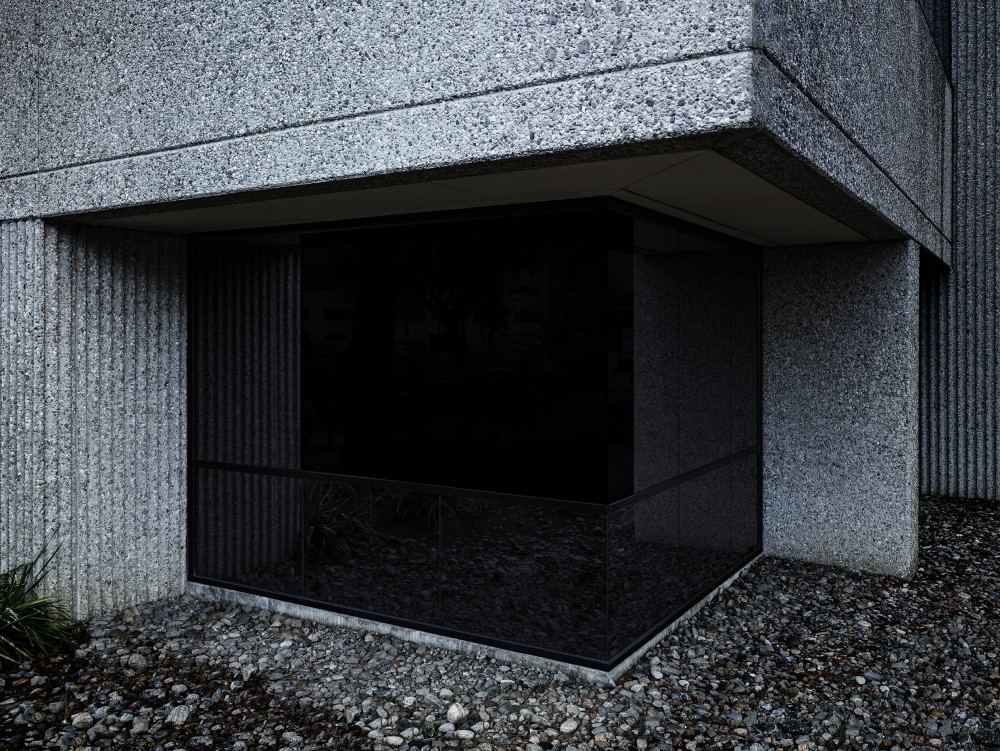 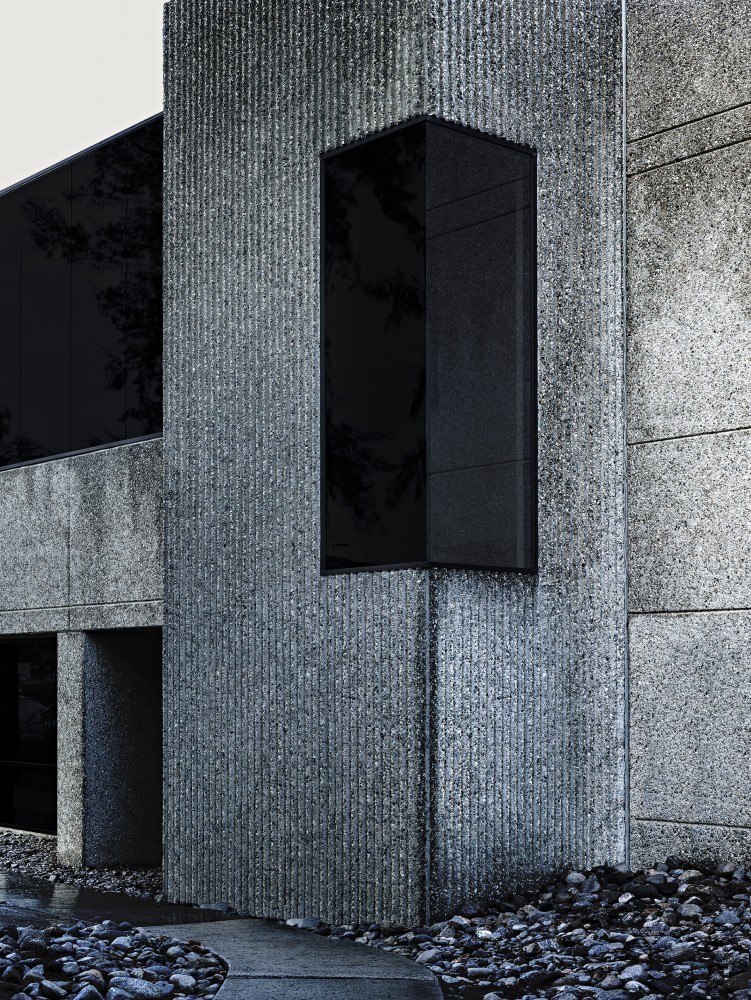 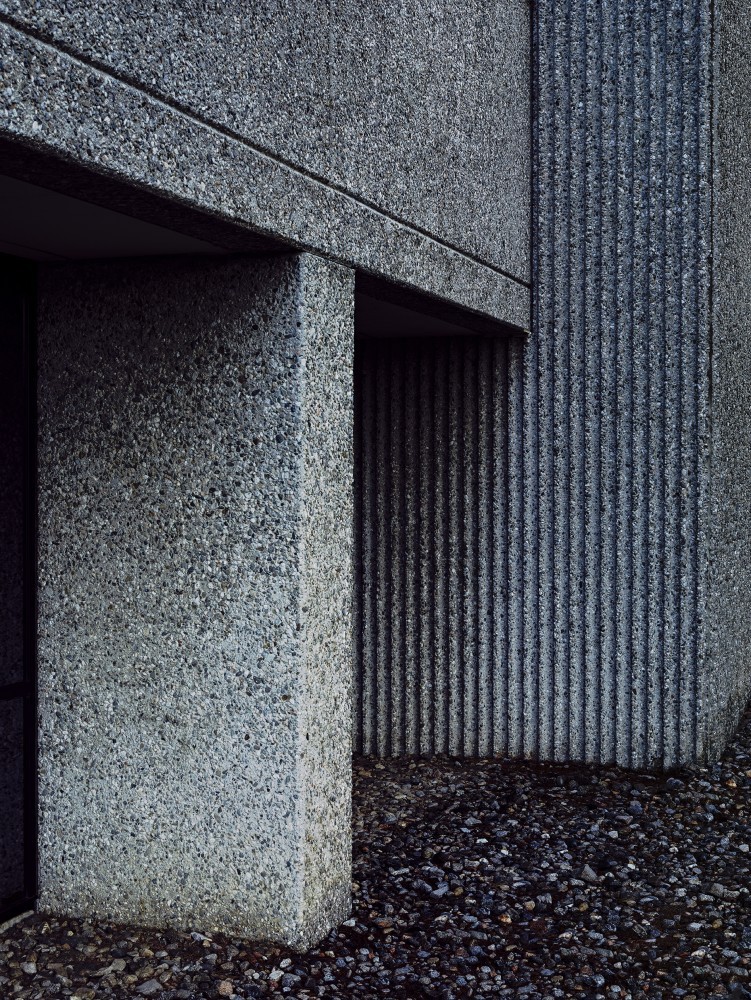 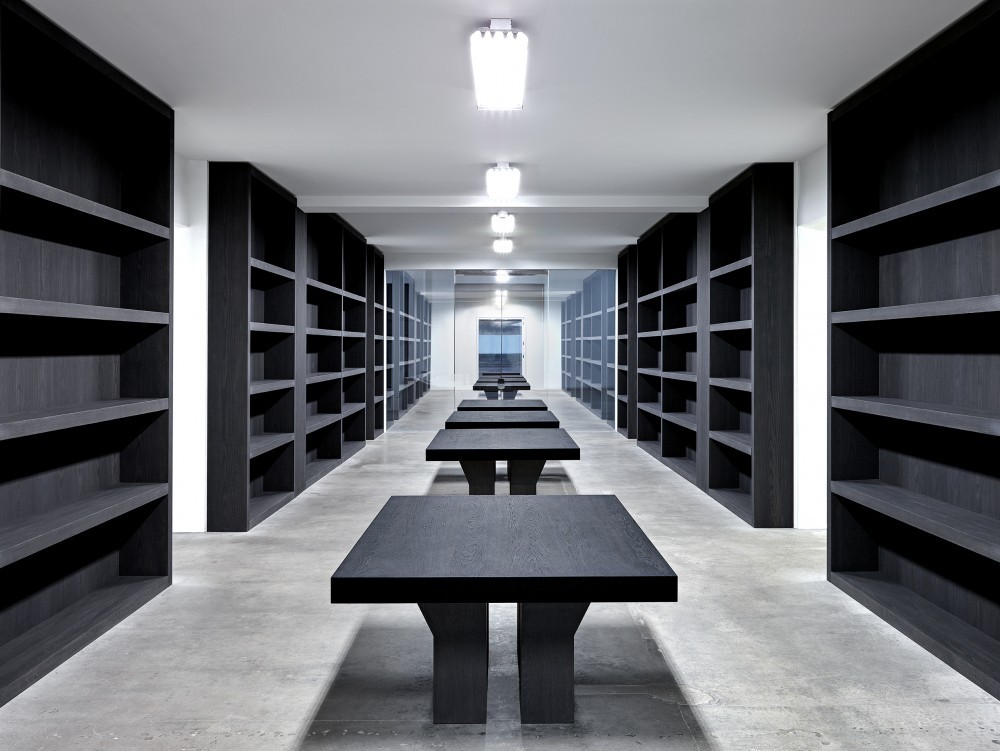 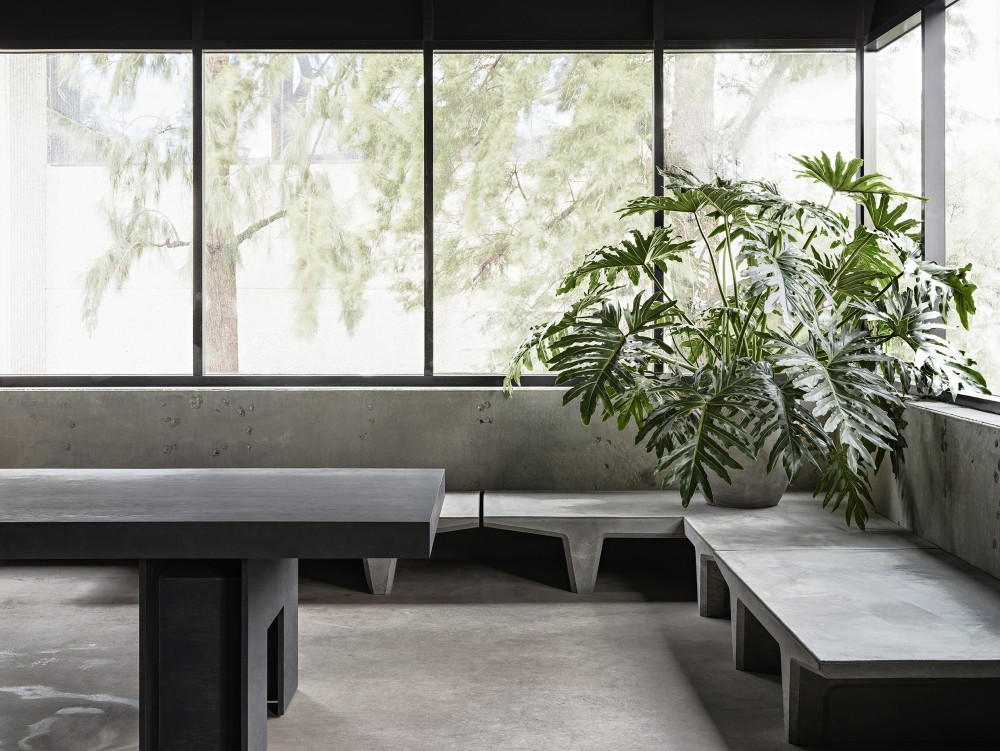 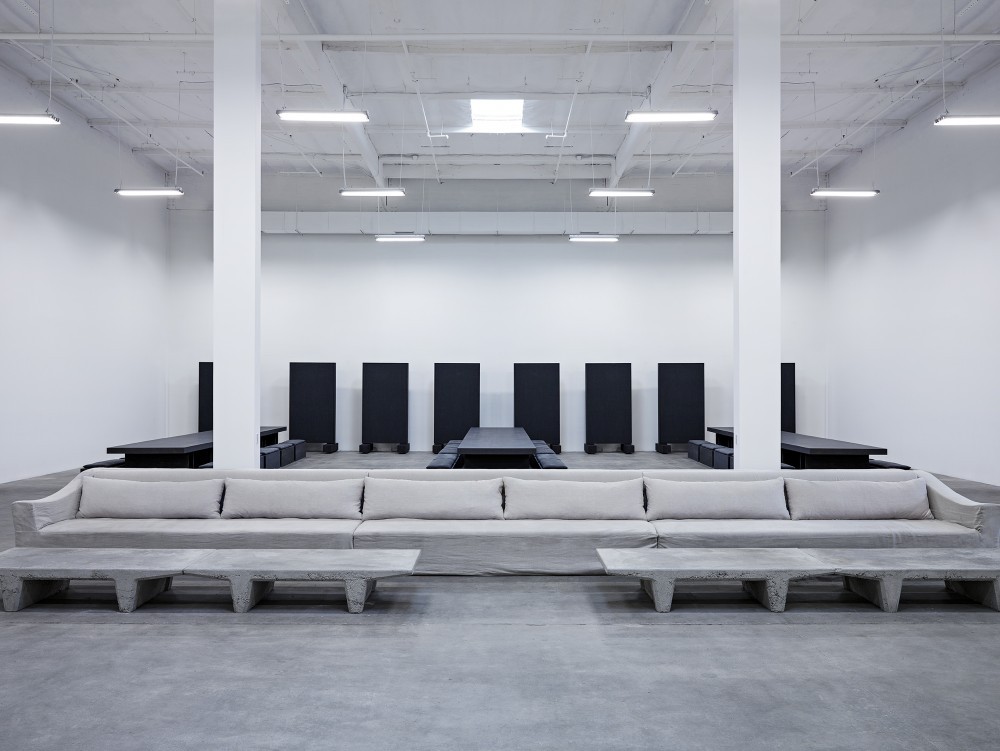 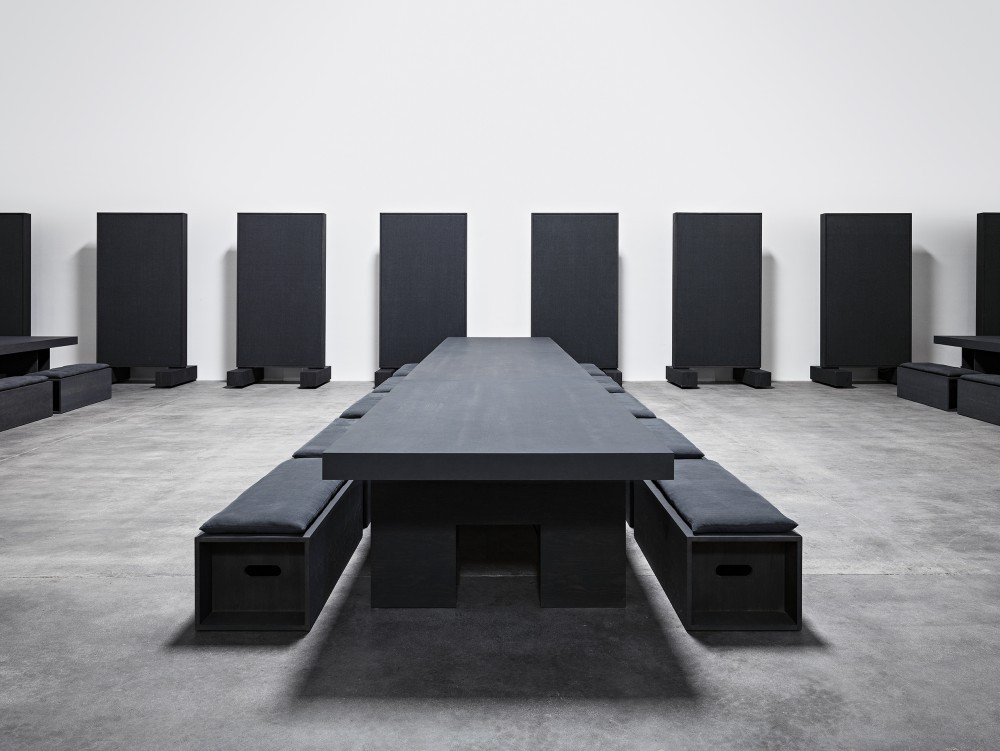 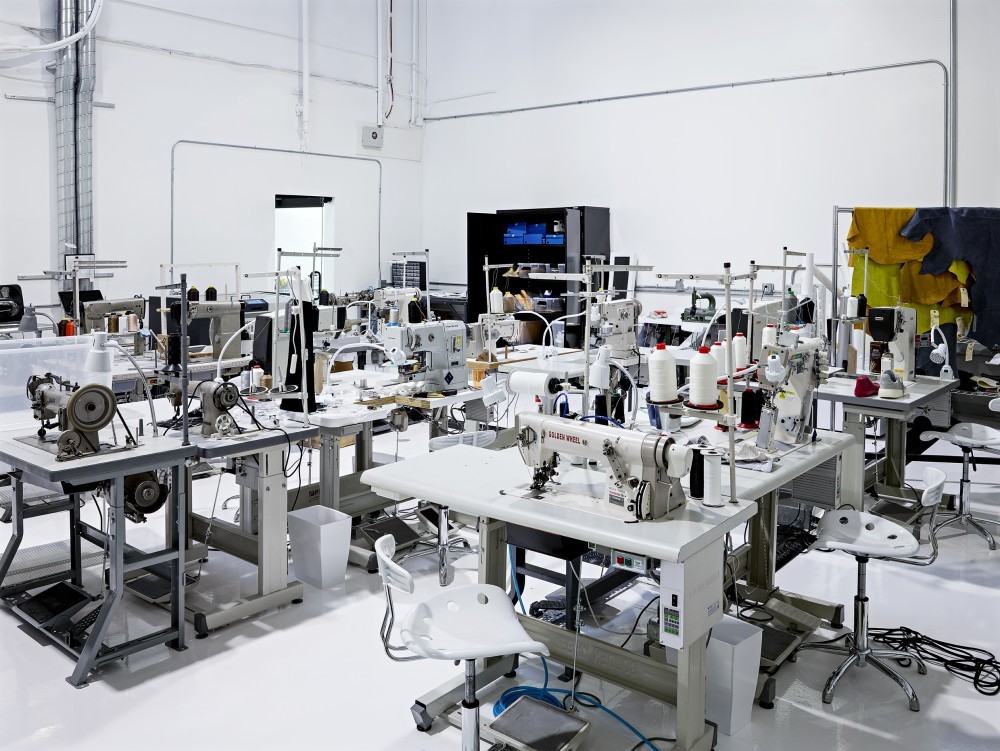 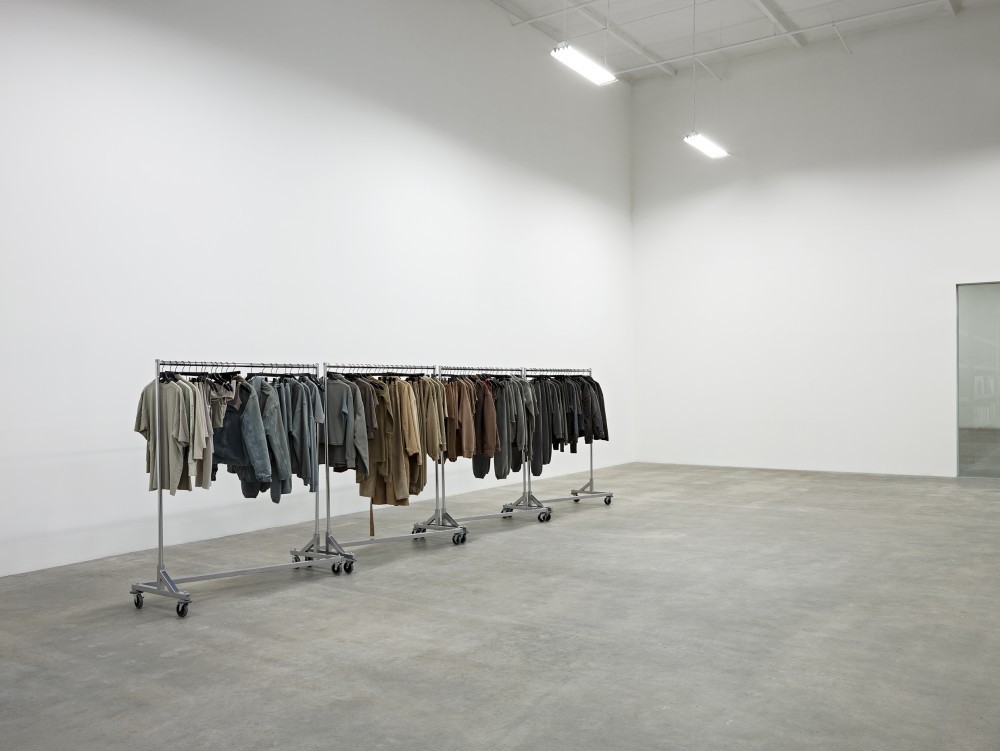 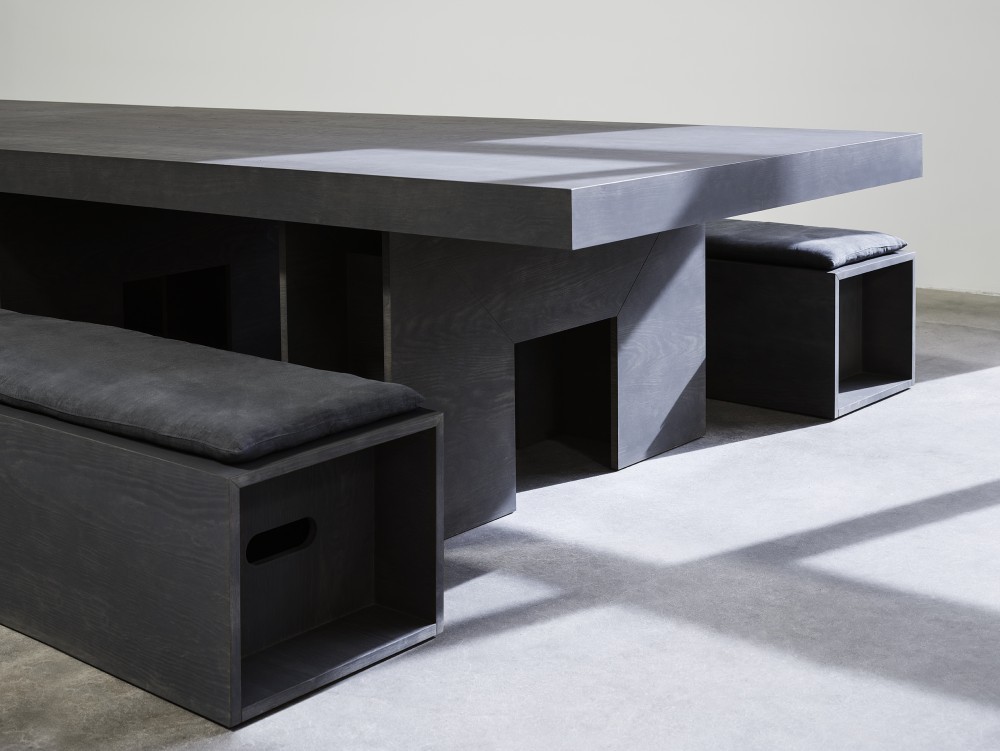 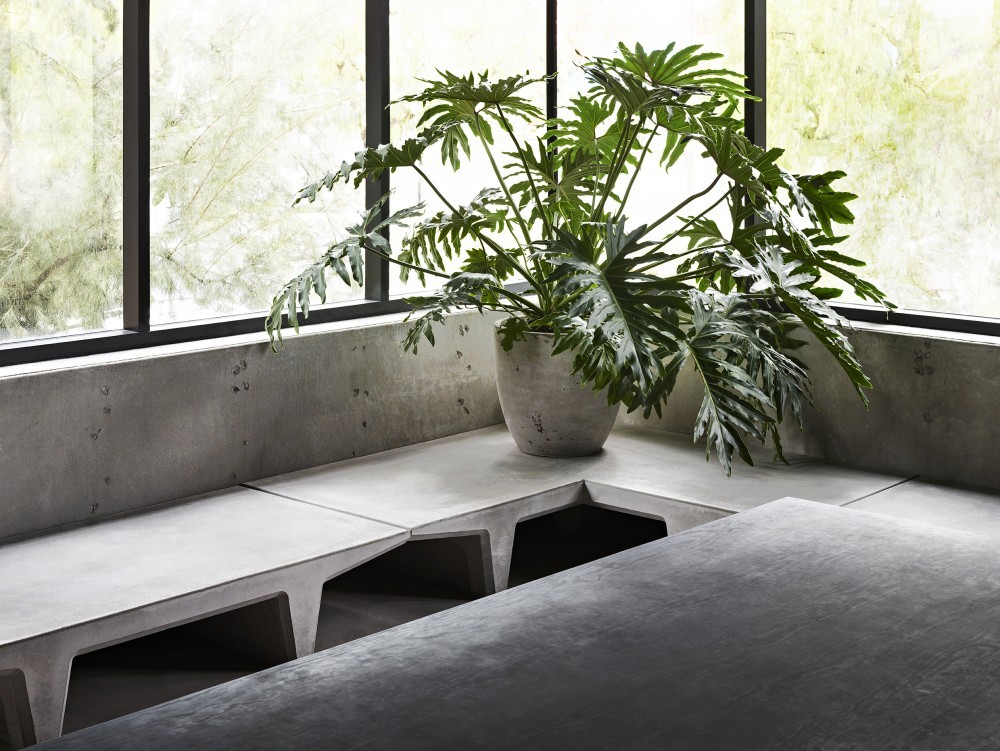 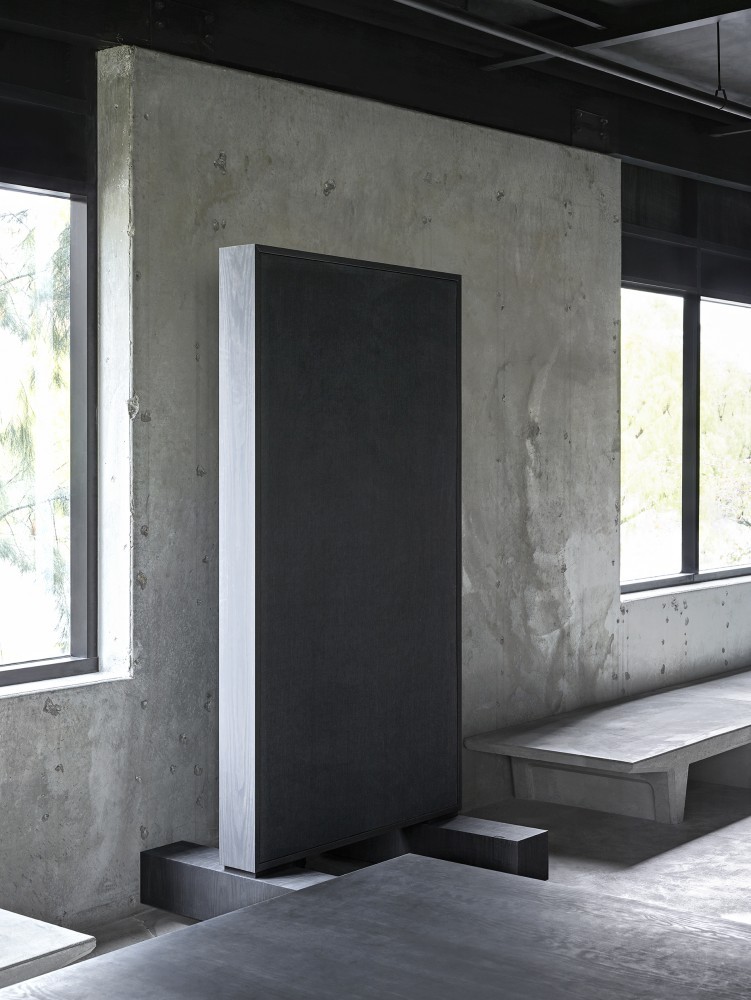 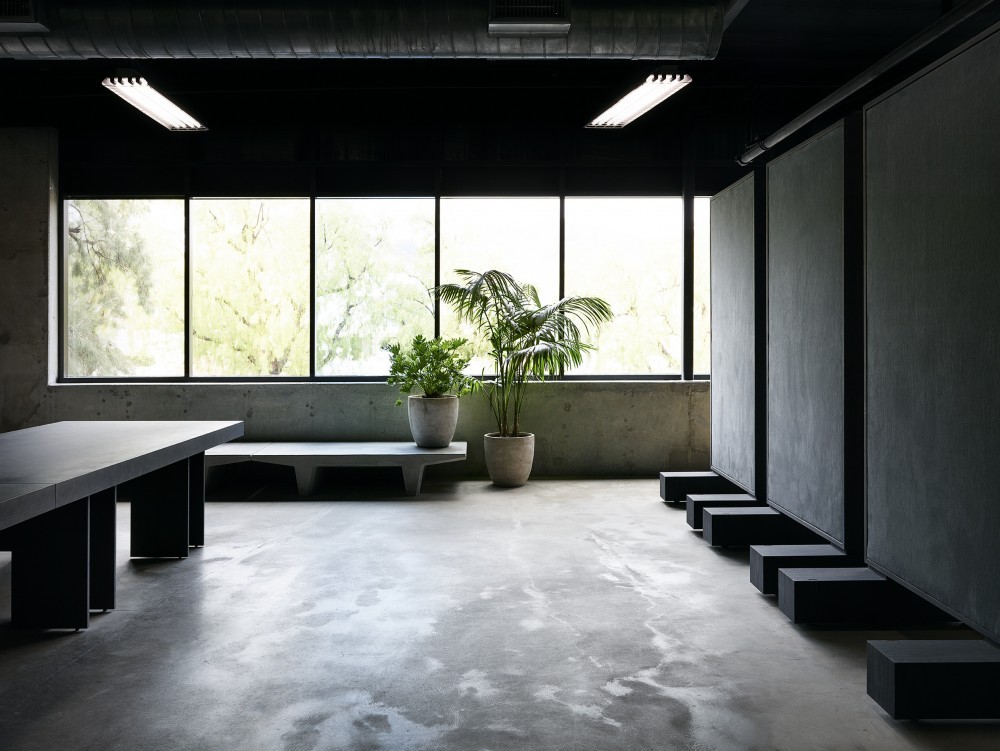 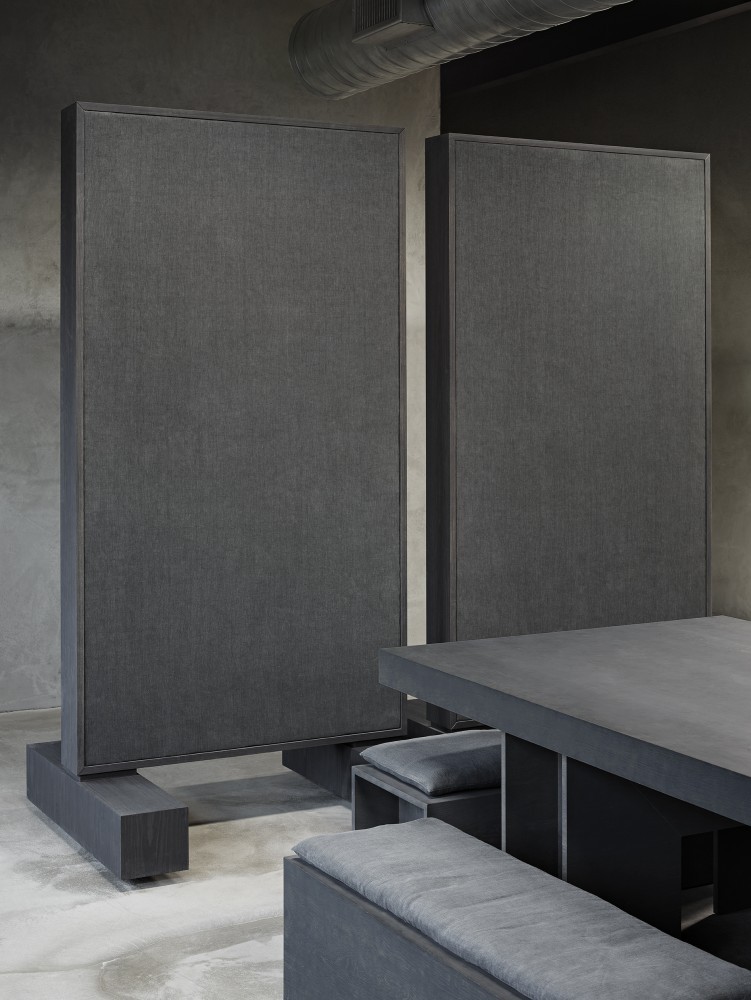 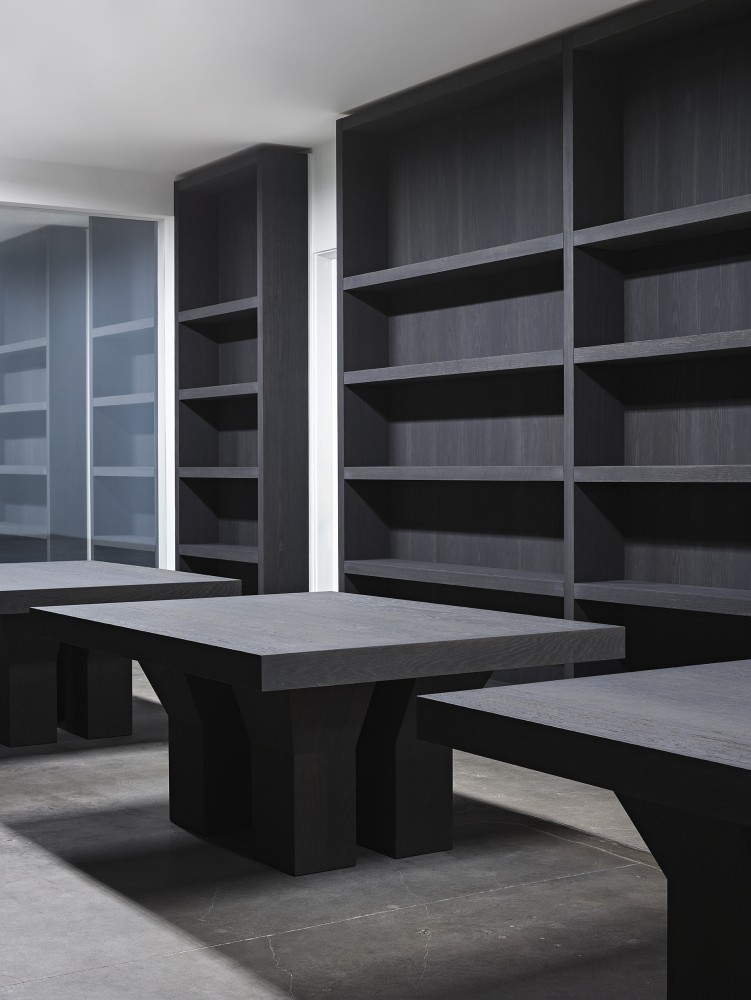 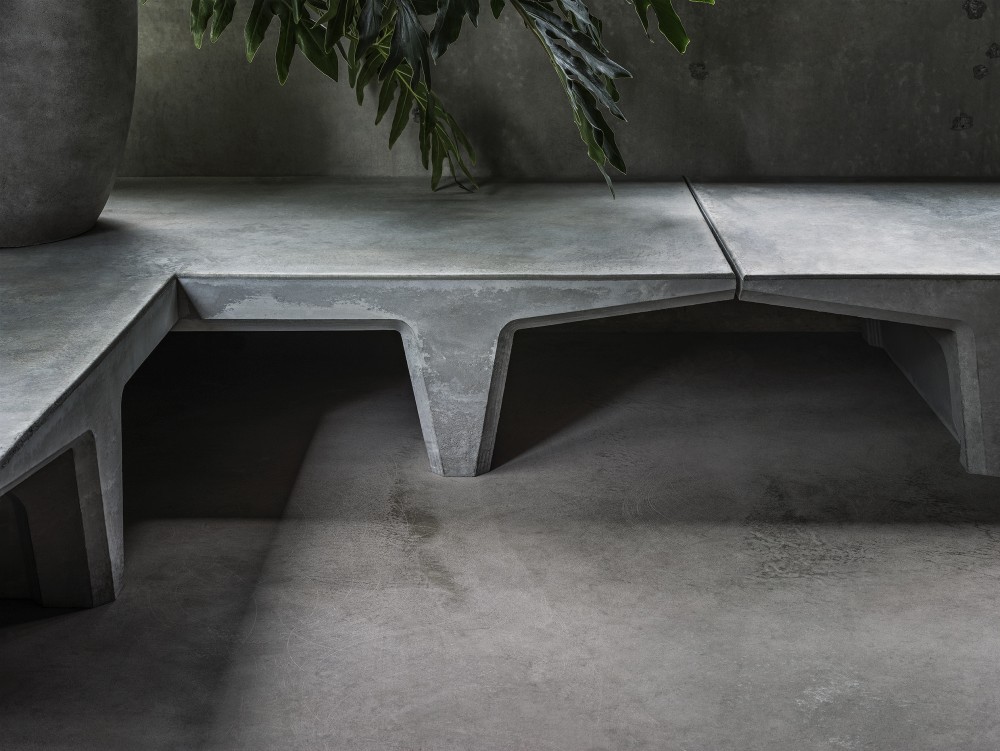 Driving the 101 Freeway from Silver Lake to Calabasas, California, I kick around in my head the literary references I could use to describe this stretch of road bounded by the Sherman Oaks Galleria to the south and the turnoff for the Ronald Regan Presidential Library to the north. Charles Bukowski’s pulp and grit was left back in Hollywood, we’ve crossed out of Reyner Banham’s ecologies, and the hills that so famously burn in Joan Didion’s Letter from Los Angeles are farther east. There’s probably a German term for this landscape of rolling hills, Starbucks, and Lexus dealerships. Certainly Adorno coined some phrase in his critique of the culture industry, written while living in exile in the Pacific Palisades.

It’s tempting to say that we are on the edge — the edge of culture, the edge of suburbia, the edge of rural California and all the narratives that go with it. (The Western High Noon was shot at Warner Bros. Ranch, which is now the Calabasas Golf Club.) But if we leave behind old-fashioned geography and look at our pin on the media map, we find that this is the territory of E!: a pop-cultural space populated by people whose names often start with K.

Which is why, when I meet Kanye West’s collaborator Willo Perron in the parking lot of a tech business park shaded by pepper trees, it makes sense that he references the Postmodern duo Robert Venturi and Denise Scott Brown. This isn’t Las Vegas, or even Hollywood, but it is the site of the Yeezy Headquarters. In our somewhat placeless media age, it is possible for Calabasas to broadcast West’s growing empire as any spectacle-driven city. “It’s post-core as core,” explains Perron, vaulting over hardcore or normcore trends. “It’s about looking at the mundane things of everyday and re-appropriating the strip mall or re-contextualizing things that we once thought of as ugly.”

We enter a 1970s-era two-story concrete office building; its corrugated formwork and black-mirrored glass is nearly identical to the half dozen or so nearby. Inside, just past security, is command central for West’s Gesamtkunstwerk, to find the German term for his all-encompassing endeavor which is unconstrained by any conventional notion of brand. Perron designed the new HQ and has worked with West for more than a decade, creating everything from album covers to stage sets. He describes their process as a twelve-year-long circular conversation that loops in and out of each of their lives. As such, the design approach brings together overlapping and sometimes competing influences: Brutalism, essentialism, utilitarianism, and Postmodernism.

In the library, monolithic bookshelves made of out black-stained wood line the walls (I glimpse the spine of more than one monograph on Le Corbusier alongside museum catalogues and volumes on fashion). Matching black worktables march down a polished concrete floor. The effect is beautiful and austere, but free of any minimalist morality. The whole space is washed in the glare of the kinds of fluorescent light fixtures you might find in a supermarket. “How do you get so far away from cool, you know, from your neighborhood, from chasing the newest thing, to be able to land something really honest?” asks Perron.

West’s vision for Yeezy is as grand as it is sincere. The 14,390-square-foot retrofitted office building is conceived as a think tank, and includes offices, a sewing room for making samples, and a recording studio. The centerpiece is a large double-height volume, which serves as an atelier and event space. Its scale and design hint at its aspirations — there’s an oversized 30-foot-long sofa that could probably seat twice the whole Last Supper guest list. Long black-stained wood benches flank another set of functional worktables, and black pin-up boards stand sentry around the room. All furniture — bookshelves, tables, benches, and couches — was custom made by an Italian luxury retail builder according to West and Perron’s exacting specifications.

In photographs, these elements seem totemic, untouchable in their Donald Judd severity, but everything was in active use when Perron and I toured the space: fabric samples and photographs pinned to boards, books and clothing piled on tables. The couch, which is made up of three wheeled sections, had been split apart and redeployed in a more informal arrangement. According to Perron, this deep interest in utility is driven by West’s desire for things to be the most useful; to be better; to be the best. Inspiration for the pieces comes from utterly utilitarian sources. For example, the thick table legs resemble I-beam flanges but are actually made out of MDF and wood veneer — a Postmodern put-on. The shape of the cast-concrete coffee tables is the conceptual love child of the supports of highway overpasses combined with Styrofoam packaging for electronic equipment. Perron muses on how, after the recent hurricane in Houston, only the freeway survived the floodwaters. In interviews, West often brings up the subject of utopia. Because the topic is candy for architecture critics, I’m compelled to ask Perron if Yeezy HQ is an idealized outpost. “This is the very beginning of the utopia,” he explains. “I think that most people that have (Kanye’s) level of energy, and are that inspired, eventually try to figure out the utopia.”

But don’t mistake Yeezy utopia for Paolo Soleri’s desert domes or Frank Lloyd Wright’s low-slung Usonia. What is taking place in a concrete warehouse in a Calabasas office park is stripped down, systematic, and brutal — an aesthetic born of suburban wasteland and off-ramps. “The weird thing about all the fancy shit, all this fragile shit, is everything is going to go,” says Perron, imagining the aftermath of a natural or manmade environmental crisis. “Like, all your beautiful mahogany, it’s going to go. The outer coating of a lot of this stuff is going to go and what remains is elemental.” Meanwhile, the Yeezy cast-concrete benches will survive any disaster.

Text by Mimi Zeiger, a Los Angeles-based critic, editor, and curator. Her work is situated at the intersection of architecture and media cultures. She is the co-curator of the U.S. Pavilion for the 2018 Venice Architecture Biennale.

All photography by Nicholas Cope.