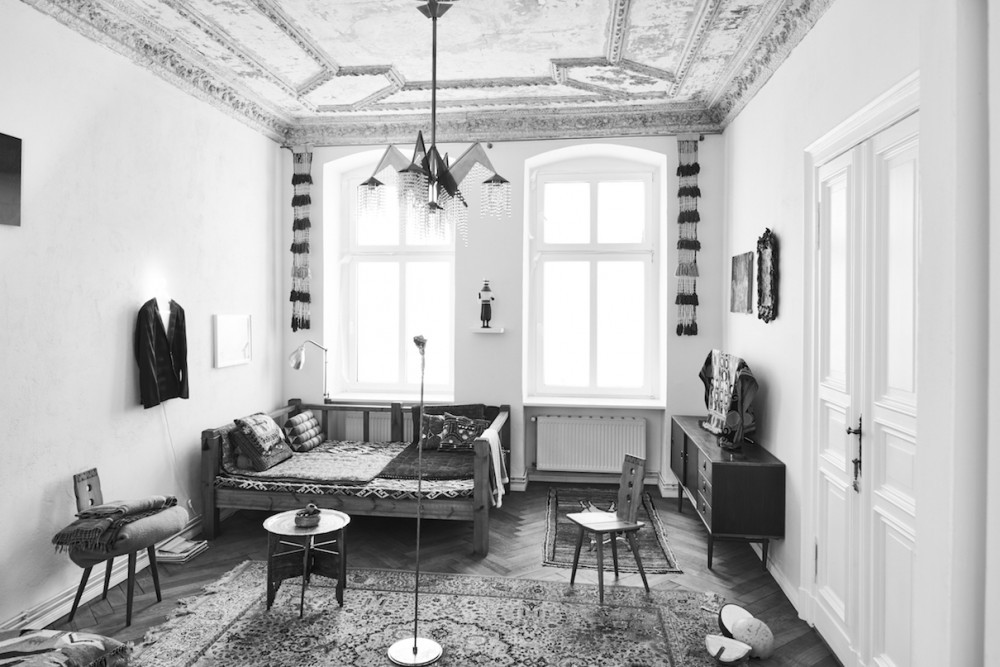 The Berlin home of Slavs and Tatars is a kaleidoscopic mix of their own artwork and of objects the artists picked up throughout their travels. In the main room, instead of a classic sofa one can find a wooden takht, a vernacular seating structure found across Iran, the Caucasus, and Central Asia. 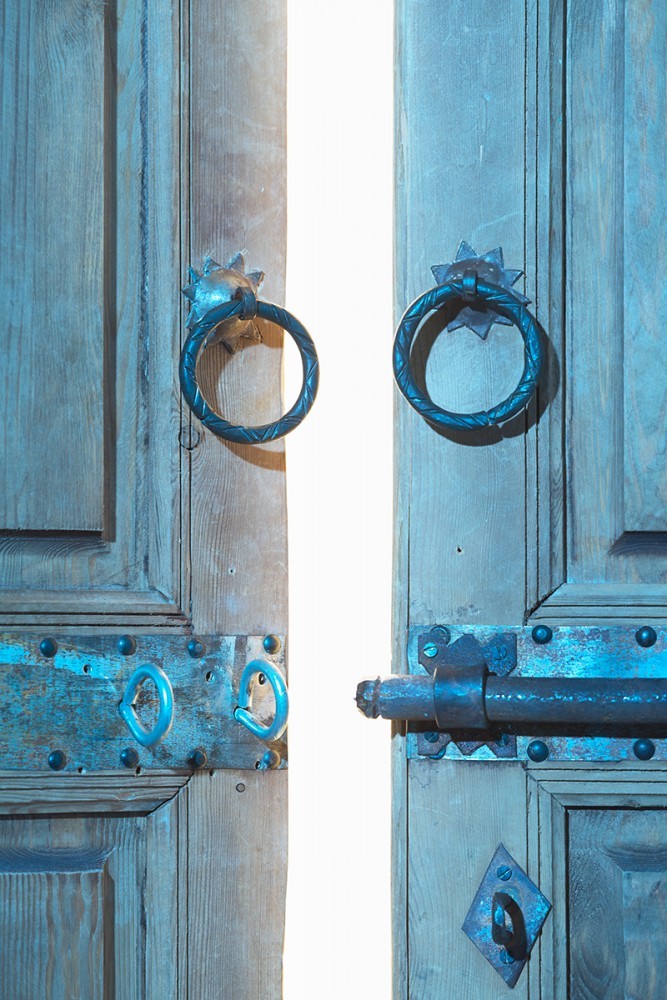 A vintage wooden Moroccan door separates the kitchen from the master bedroom. 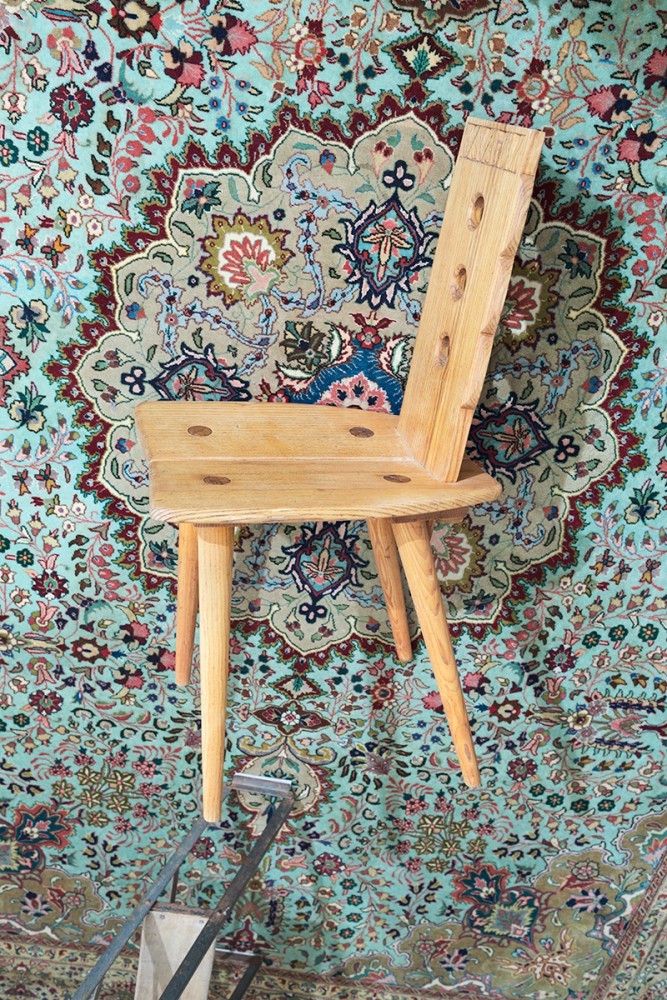 The chairs in the dining room are handmade by woodworkers in Zakopane, a mountain village and ski resort south of Kraków popular with Polish artists and intellectuals. The Zakopane style was instrumental in crafting a modern Polish identity in architecture and interior design in the early 20th century. The rug is from Iran. 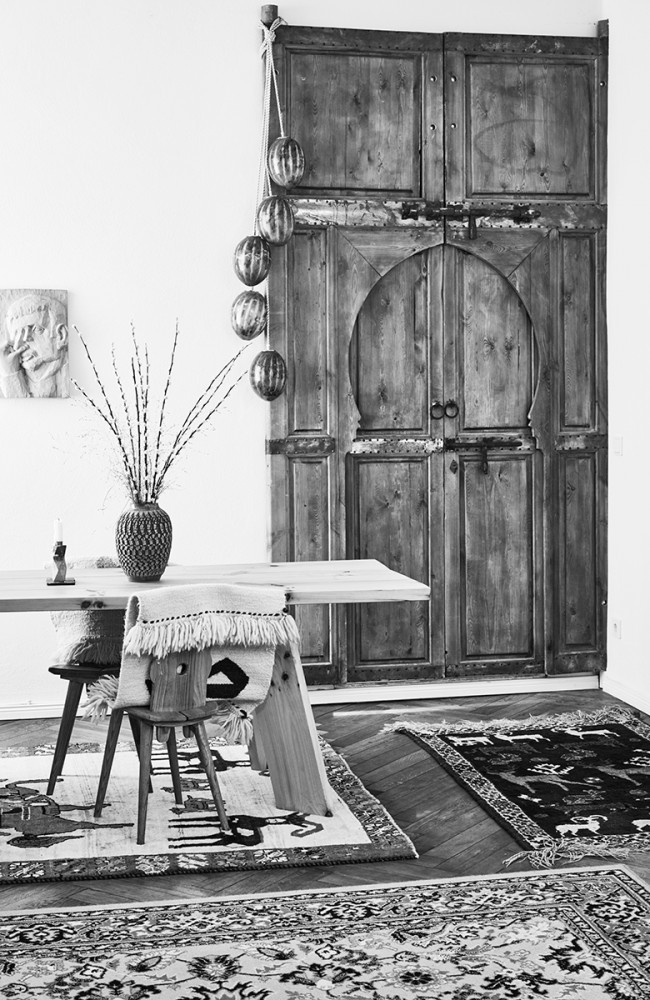 View of dining room filled with rugs from Iran, Poland, and Afghanistan. Watermelons, like the ones draped around the doorframe, are a recurring motif in Slavs and Tatars’s work. 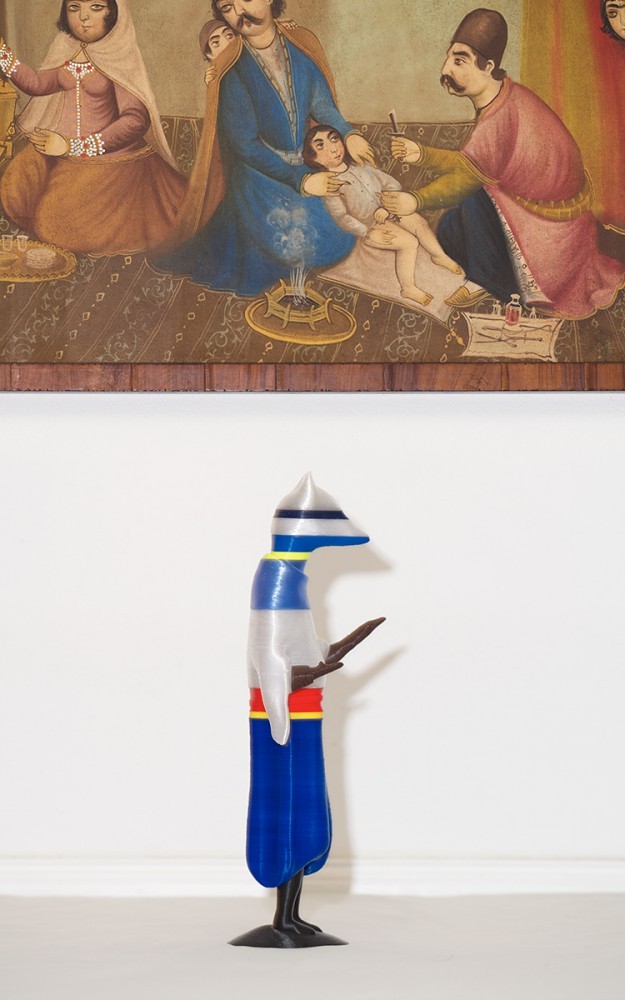 A so-called “coffeeshop painting,” named after the usual venues in which they’re often found in Iran. This depicts a circumcision ceremony. The 3D-printed sculpture in the foreground is called Man with the head of a dog (2015) by Polish artist Janek Simon. 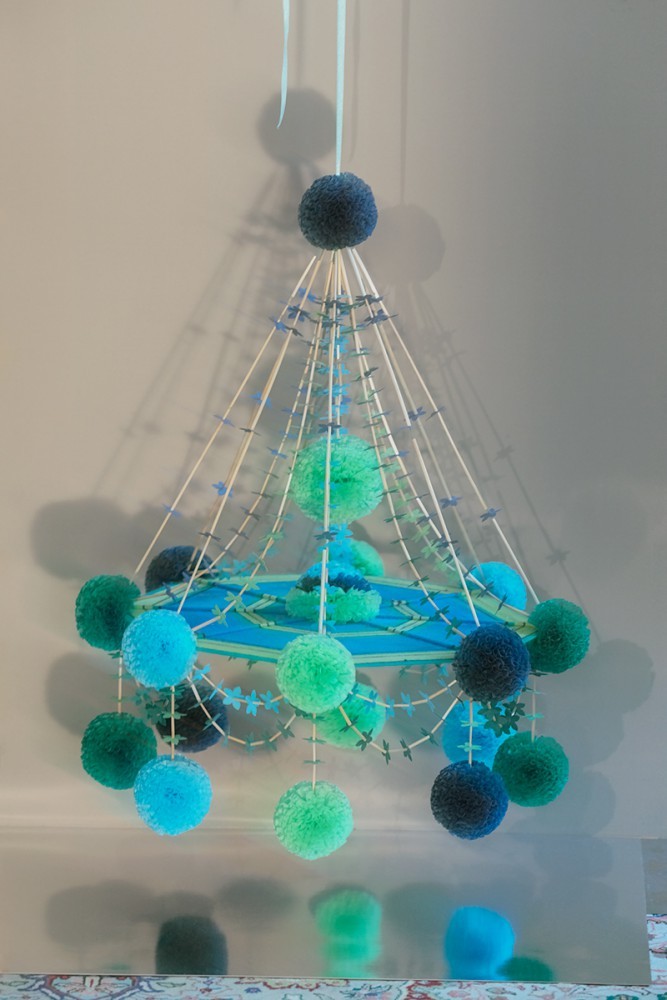 The artists’ Iranian and Polish heritage is the source for many of the apartment’s details, including this pająk “chandelier.” Pająks (the word for spider in Polish) are usually crafted during harvest time and hang in homes across Poland. 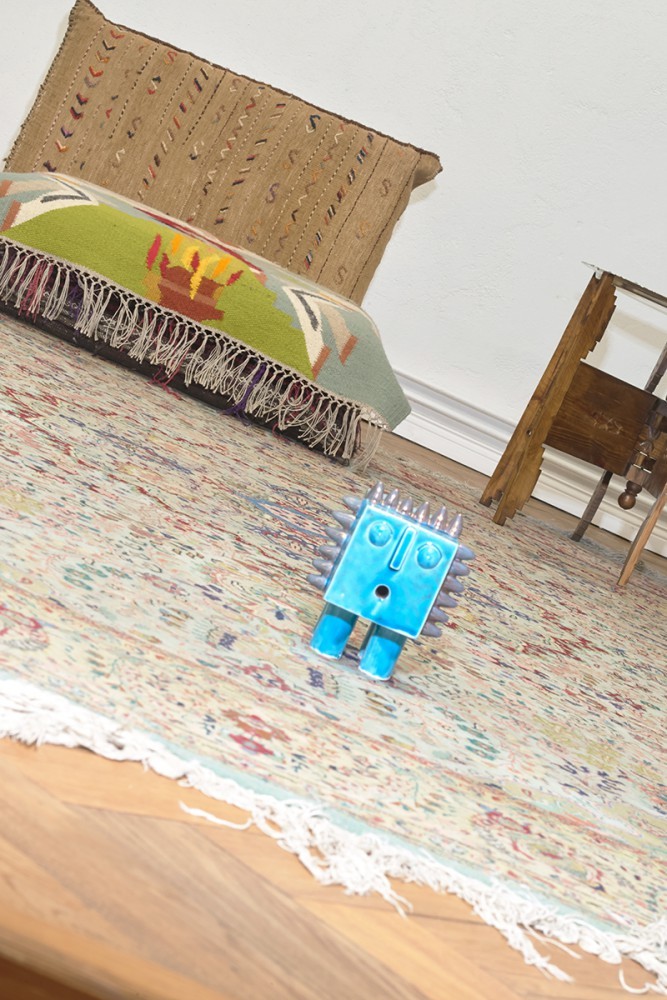 A stack of Iranian gabbeh cushions form a makeshift daybed next to a an Ottoman binares foldable wooden side table with Bosnian copper tray top. In the foreground a blue lion ceramic by artist Reza Taebi. 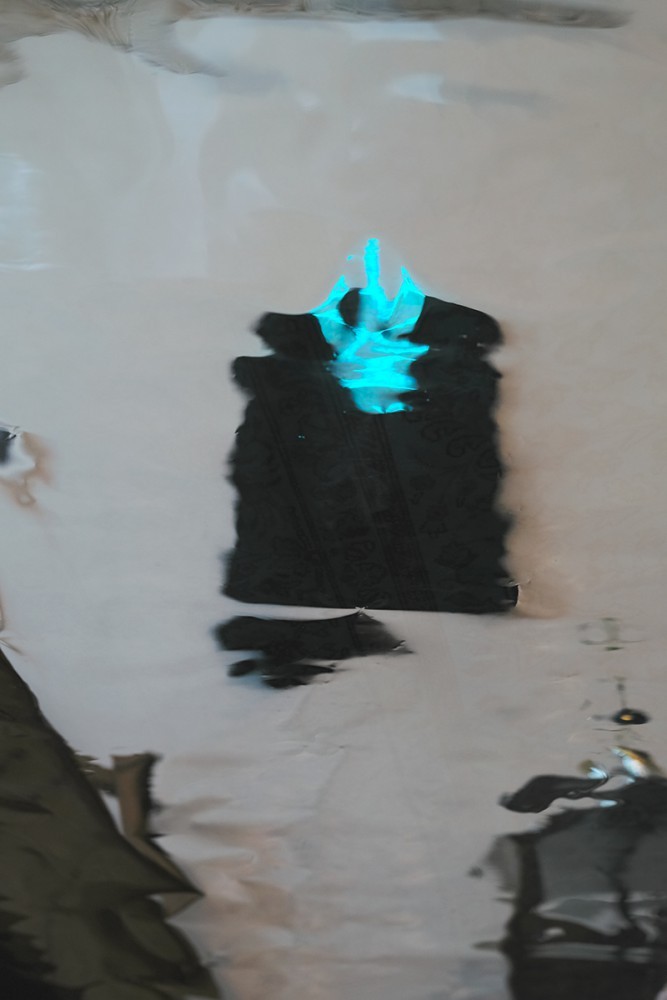 From Nine to Five, an illuminated neon wall sculpture by the artist Florian Auer. 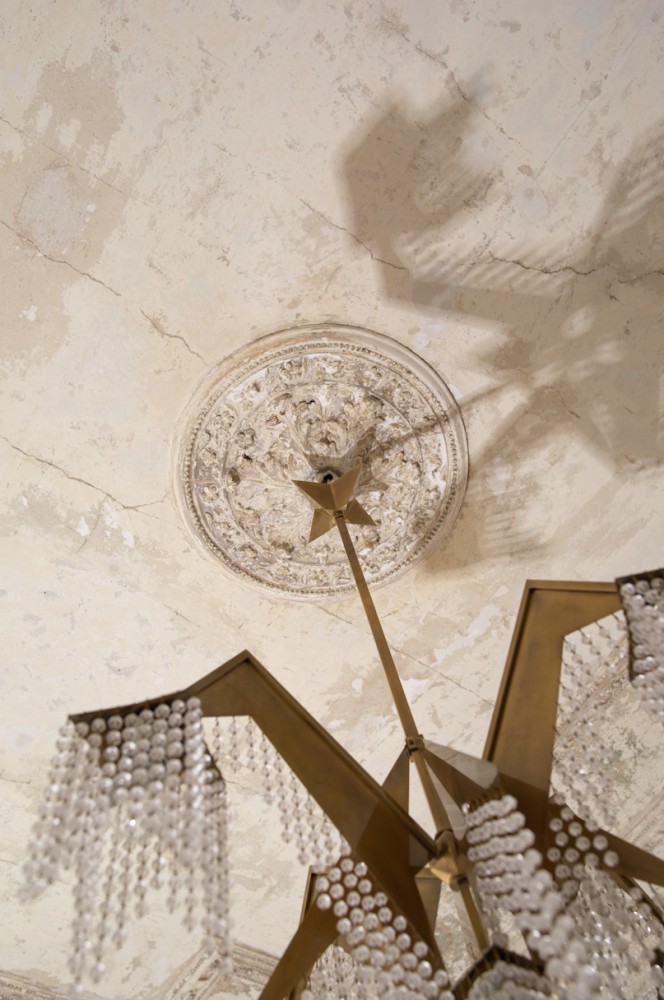 A Josef Gočár chandelier is described by the artists as “a fine example of the short-lived period of Czech Cubism” leading up to World War I. Here it adorns the ceiling of the living room which was stripped of years of plaster to reveal the original molding as well as patches of decorative painting dating back to the turn of the 20th century. 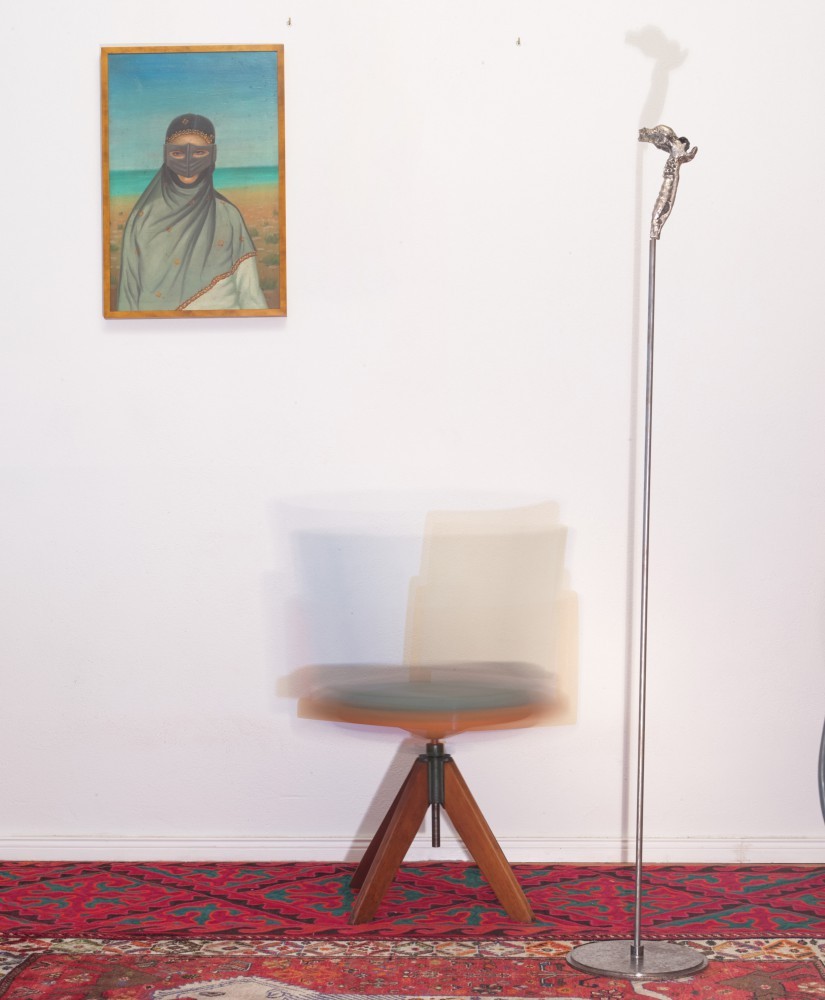 From left to right: Painting of woman with burqa, found in Bandar-Abbas on southern Persian gulf coast of Iran, 1930s chair from Berlin, and Oskar Dawicki's Speech is Silver. 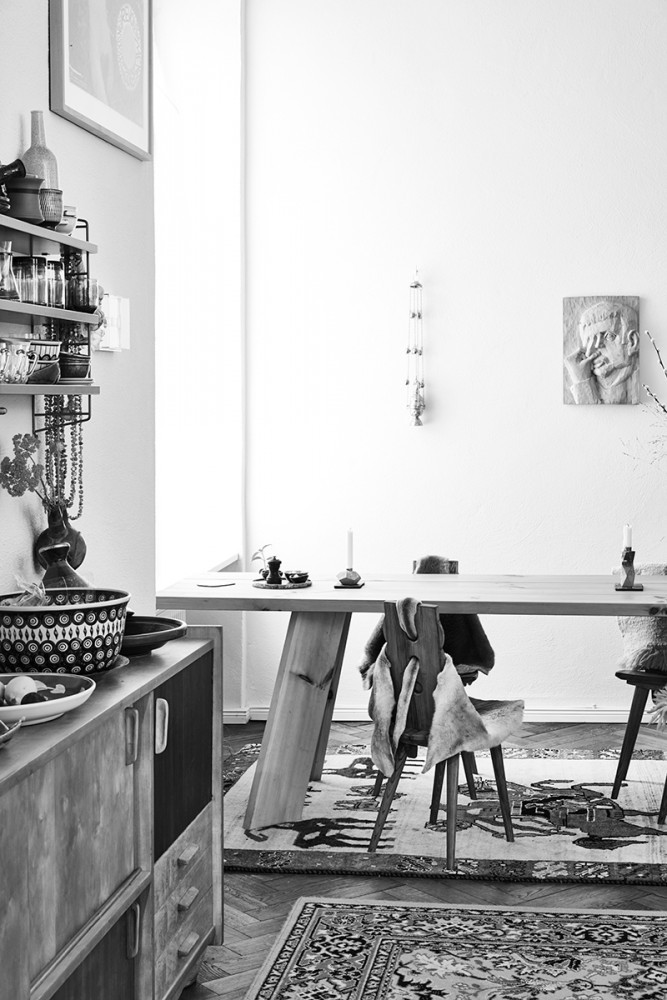 On the wall facing the dining room’s large wooden table is a small woodcarving by Georgian artist Giorgi Xaniashvili.

NOMADIC COMFORT: AT HOME WITH ARTISTS SLAVS AND TATARS

Since 2006, the artists’ collective Slavs and Tatars has traveled the globe, moving residences between the U.S., Paris, and Moscow, pursuing an art practice that oscillates between lectures, installations, and the publication of books and other printed matter. For the past two years they’ve been in Berlin, where they’ve converted a charming Altbau-apartment into a comfortable treasure trove of multicultural artifacts. Located in the central Moabit district, the apartment is within a short walking distance of where the Berlin Wall once stood — Slavs and Tatars’ founding duo, one of Persian background, the other Polish, often describe their cultural sphere of interest as “somewhere between the Berlin Wall and the Great Wall of China.” “In our work we have long been interested in redeeming a radical agency within crafts,” say Slavs and Tatars by way of explaining how they’ve filled the five rooms with furniture and rugs sourced from artisans in Iran, North Africa, Poland, Siberia, and Uzbekistan, to name but a few. In addition to the rare furniture finds, Slavs and Tatars have installed works by artists such as Agnieszka Kurant, Cyprien Gaillard, Janek Simon, Florian Auer, and Giorgi Xaniashvili, many of whom are also friends.

As for the apartment’s bare-bones aesthetic, Slavs and Tatars worked with the Berlin-based architect Marc Benjamin Drewes on minimal interventions to bring the space’s amenities up to date and highlight its original details. Case in point, the ceiling, from which they stripped decades of paint layers to reveal its elaborate Gründerzeit stucco molding. Suspended from the living-room rose is a chandelier by Josef Gočár, an influential artist and architect during the brief flourishing of Czech Cubism during the years before World War I, beneath which stands a colorfully upholstered takht, or divan, commonly found in homes and teahouses throughout the Caucasus and Central Asia. “Many of these objects may seem exotic, but they’re generally not expensive. It’s just a matter of going there to get them,” they deadpan. Like a cut crystal whose facets reflect a multitudinous interplay of light, color, and texture, Slavs and Tatars’ Berlin home is a prismatic portrait of its poly-cultural owners and their international lifestyle.