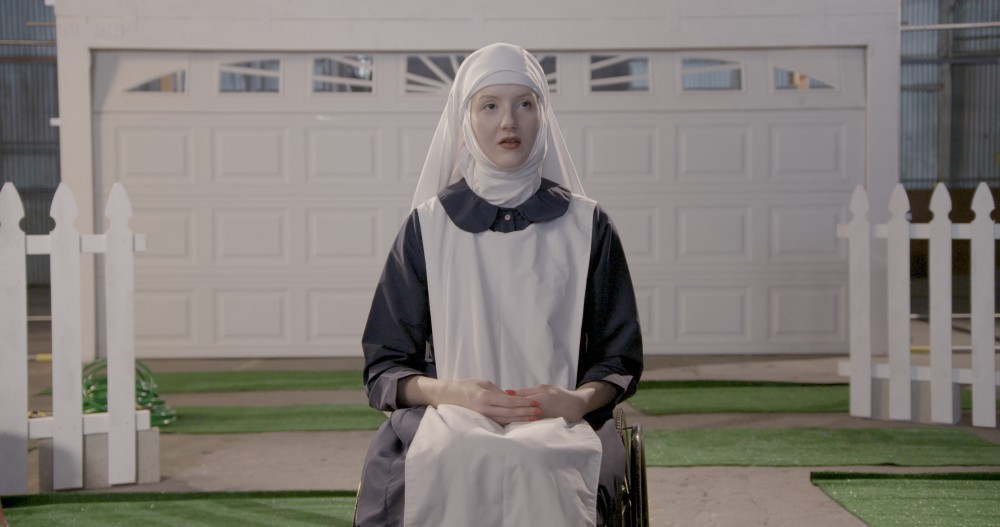 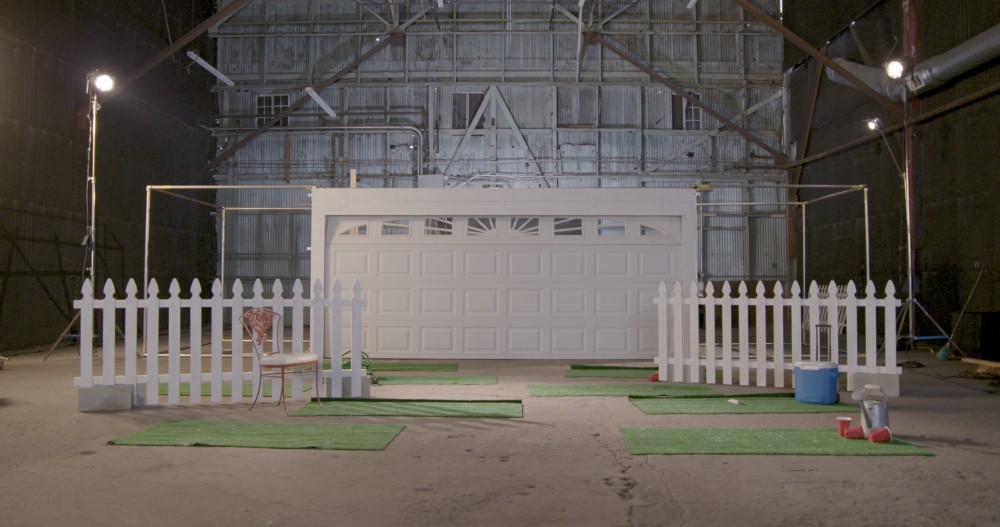 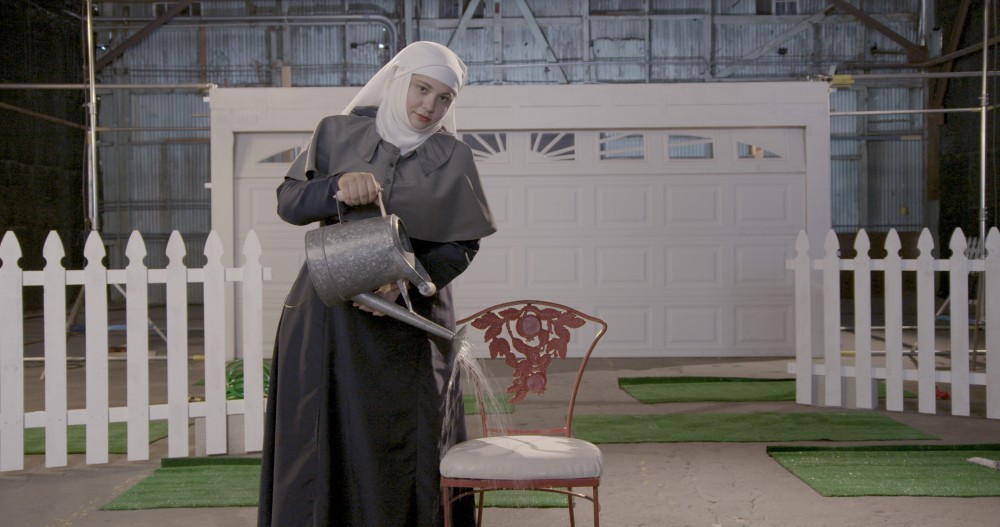 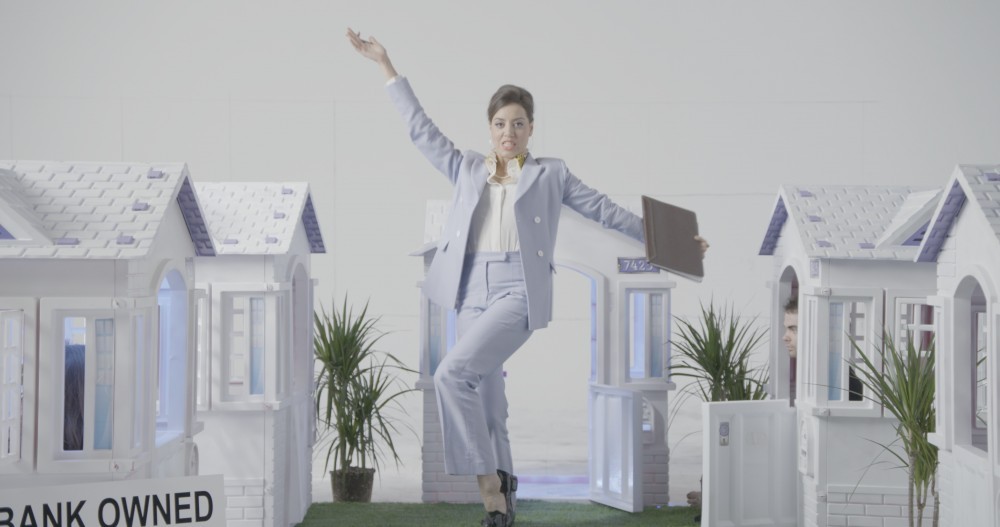 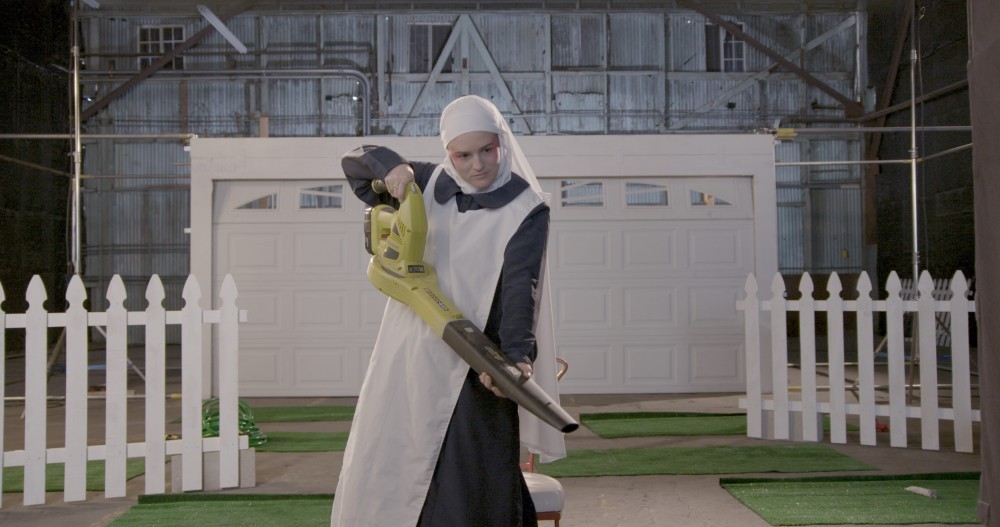 “There's many layers of gossip that lead to its origin,” Olivia Erlanger explained about the starting point of her still-in-progress film, a collaboration with Luis Ortega Govela that would preview later that night at London’s Institute of Contemporary Art. Sitting by the pond in the nearby Victoria Park, I offered the journalistic safeguard that any of this chatter which informed the film could be told to me “off the record,” but Erlanger was adamant that nothing needed to be kept clandestine. “Print it! Tell them all!” she exclaimed. “With names please,” Ortega Govela added. Who knew the story of the garage, that banal architectural appendage of the suburban home, would be so juicy!

The film Garage, which shares a title with the pair’s book, published by MIT Press last October, explores the origin of the garage and its impact on the American non-city and psyche, tracing a narrative from Frank Lloyd Wright (and even Jesus Christ) to the present, stopping along the way to pick up characters like Steve Jobs and Gwen Stefani, and connecting them in a conspiratorial web of American mythmaking.

The film is similarly a strange amalgamation of characters: weed-dealing nuns, actress Aubrey Plaza, and a live-in sex slave all make appearances even just in this rough cut, around half the running time of the eventual feature. But what do drug nuns and Parks and Rec stars have to do with architecture, you might be asking? According to Erlanger and Ortega Govela, quite a lot.

“The garage is the id of the home,” Ortega Govela contended. Often windowless, it’s where the excess of a home spills into, squirreled away into cobwebbed concrete corners. Though designed “for” the car, it is often misused, so to speak, making it a sort of anti-programmatic space, one both of and separate from the normative family home. It’s where disaffected dads can form maladapted masculinities and grunge rock teens can delude themselves into thinking they’re counterculture, which is to say in this space of difference, the sameness of the white hetero-patriarchal family may in fact be formed.

“Ultimately Garage, the book, is an exploration of the spaces where family is created and where family lives,” Erlanger explained, discussing how its film adaptation, though punctuated by historical anecdotes dramatized through uncanny improv skits, remains firmly rooted in the present. “I think the way that family lives today is very represented in the media. If you think about the Kardashians, you consume family as an entertainment symbol.” According to this logic, the garage is an image and ideology as much as it is an architectural form.

While Garage the book argues that the garage and its attendant material and political concerns — from zoning laws to automatic doors — were a product of the normalization of a heterosexual white suburbia, the film picks up this narrative in our current era when homeownership is on the decline. According to Erlanger, the adaptation is about “the underside of life and the characters are all people who are overlooked.” Fourth-wave garagedom is not for cars, and not exactly for upstarts or bands either, but for that which can’t fit in the home. “There's a lot of different people who look to the garage as a space of refuge because their identities never fit into a mainstream,” continued Erlanger. “So naturally in making a film about a garage we are going to meet people who don't fit into that norm. And it really is gratifying because I just think that we're giving space and platform to people who are complex.” And, while the book focuses on the patriarchal power of the garage, the film examines American lifeways that they believe are increasingly “matriarchal.”

Erlanger and Ortega Govela propose that the women who today find refuge in the garage (and the final film will primarily, though not exclusively, feature women) engage in the strategic mode known as Reality Distortion Field (RDF), which has a decidedly masculine legacy spanning Lloyd Wright, Jobs, and even Kurt Cobain. A term that Apple employees borrowed from Star Trek to describe Jobs’s ability to state objective falsehoods in order to make people believe them enough to make them real, in this context RDF refers to how the film’s subjects are using the garage as architectural and ideological modes of projecting their own non-realities.

The filmmaker duo is interested, as well, in how these reality distortions extend beyond the garage. Plaza is, of course, an actress; which is not to say she’s fake but rather that her career is predicated on faking it for others’ entertainment. The Sisters of the Valley, it seems, do not in fact grow their marijuana as they claim, but import it from Colorado. And what do dominatrixes traffic in if not fantasies? Slippery, these stories are always shifting, like a concrete garage floor slick with oil from a car long out the door. Erlanger and Ortega Govela even put RDF to work themselves when they went around telling friends and potential funders they were making a film without any concrete plans — Erlanger claiming (perhaps as an act of mythmaking) that she’s barely held a camera besides an iPhone.

The most traditional hobbyist garage project has always been construction of the self, according to Erlanger and Ortega Govela. After all, branding and mythmaking is the central American mass-delusion, one that more or less must be engaged in to survive under the extremities of this era’s particularly coercive and isolating form of capitalism. Garages, the architectural spaces that held the cars that made suburbia and the entire white-picket fence American Dream possible quickly revealed themselves as everything but stables for automobiles. Erlanger and Ortega Govela insisted in their book that that the garage is not just a physical space, but an ideological device: one that helped make the “all-American” nuclear family and the white flight suburb as much as it made Nirvana and Hewlett Packard. Now in their film that same architectural and ideological typology gets a second, very 21st century wind, serving as a place that allows weed-cultivating nuns to flourish and kinksters to live comfortable (and profitable!) lives.

Videos and stills courtesy Olivia Erlanger and Luis Ortega Govela.
Extended cuts will be released on October 28th with DIS.