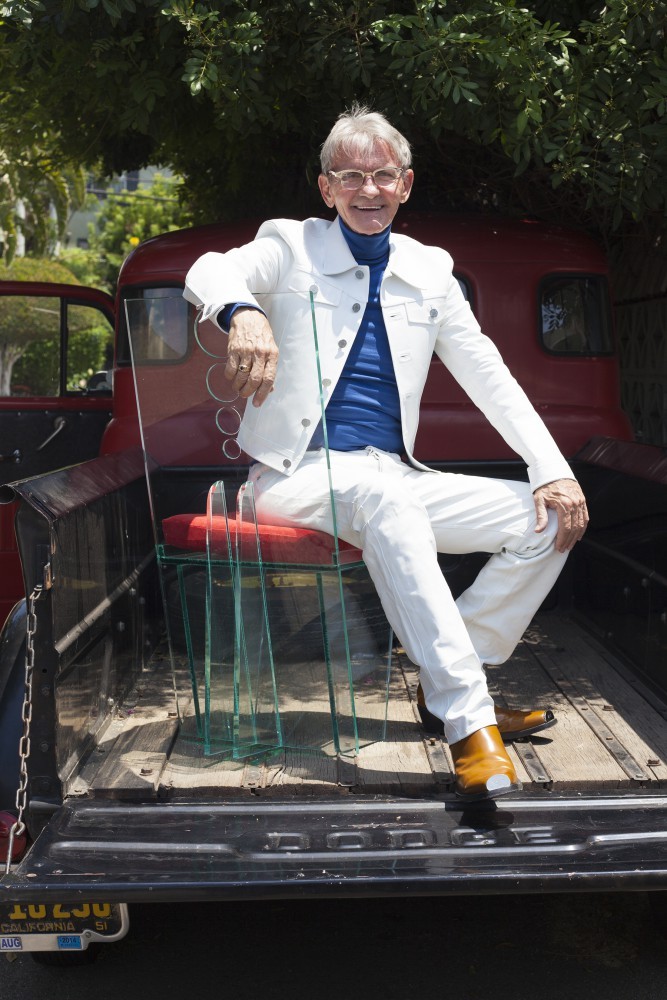 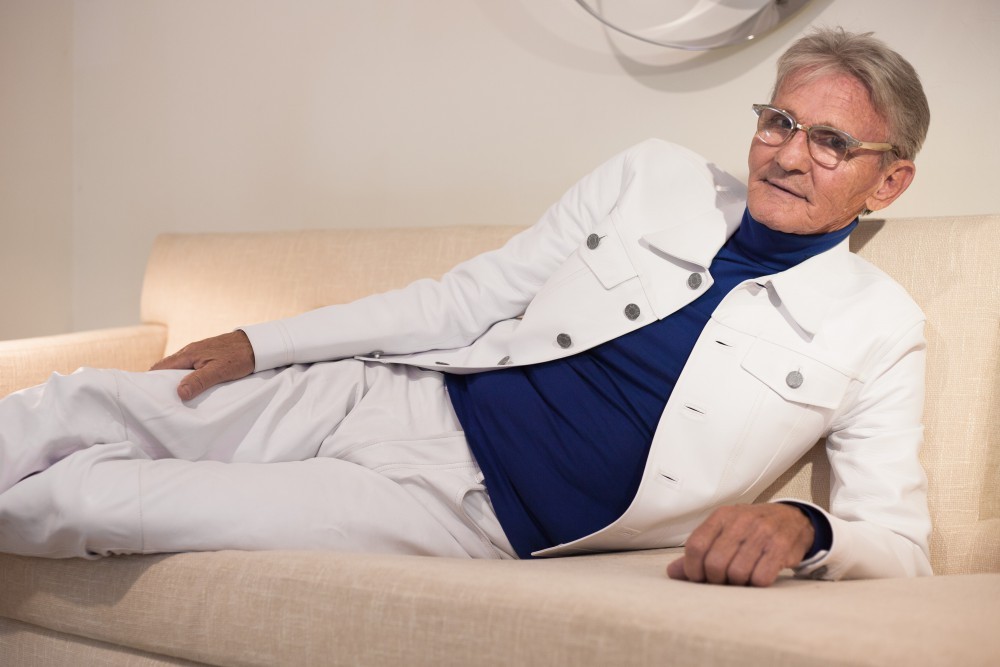 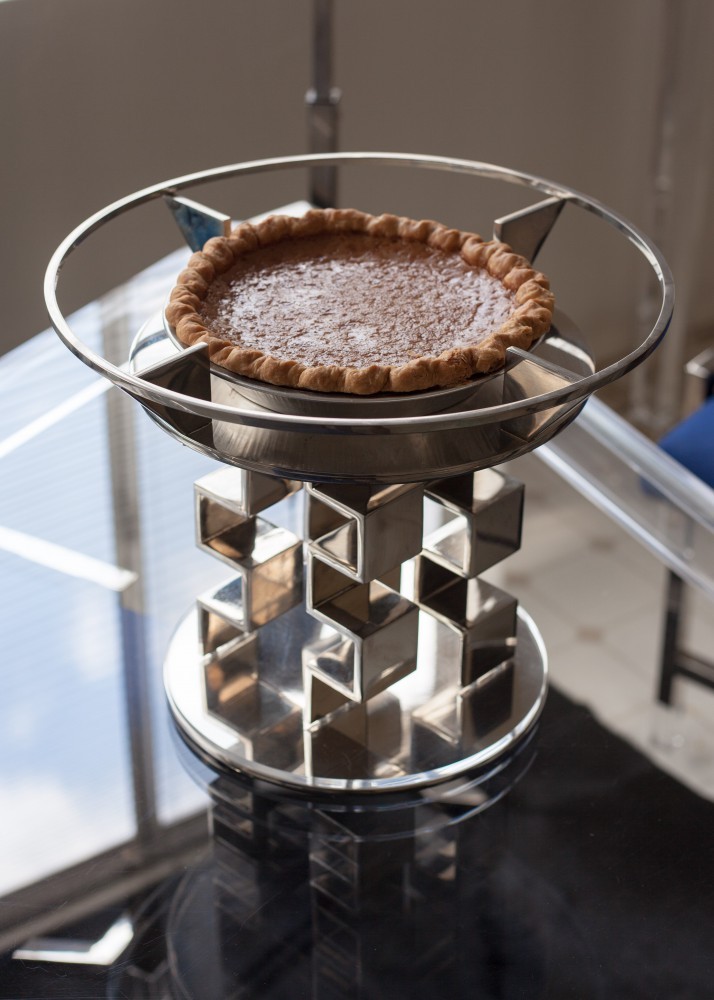 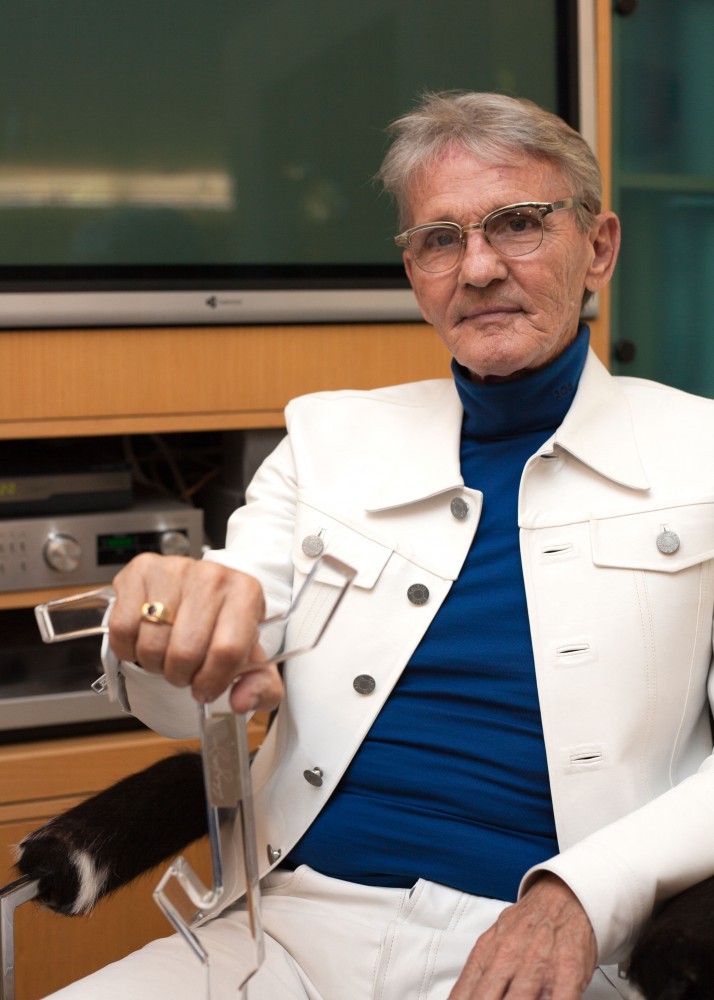 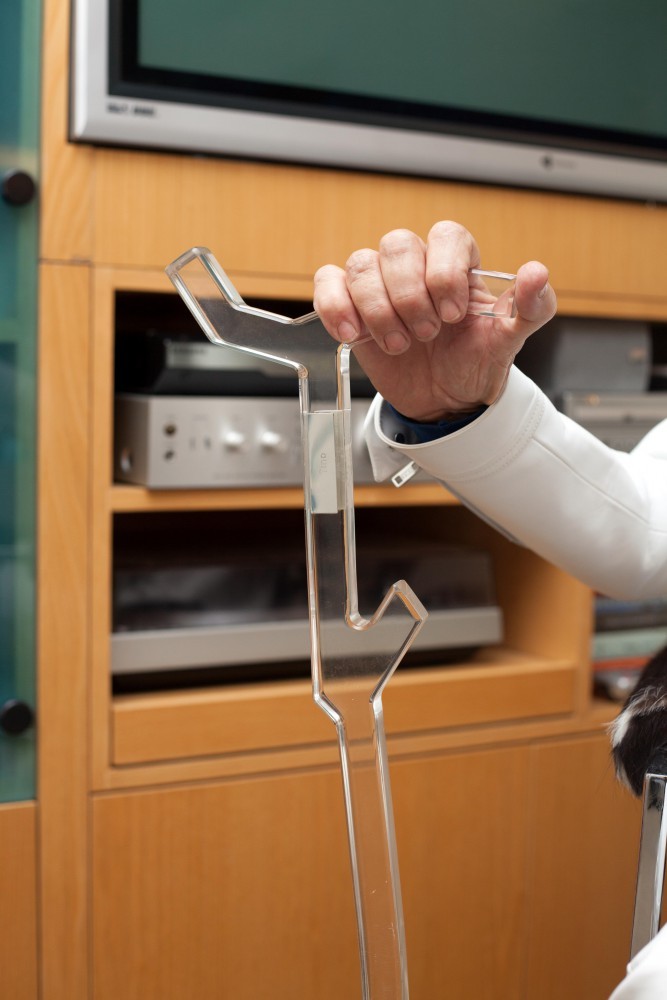 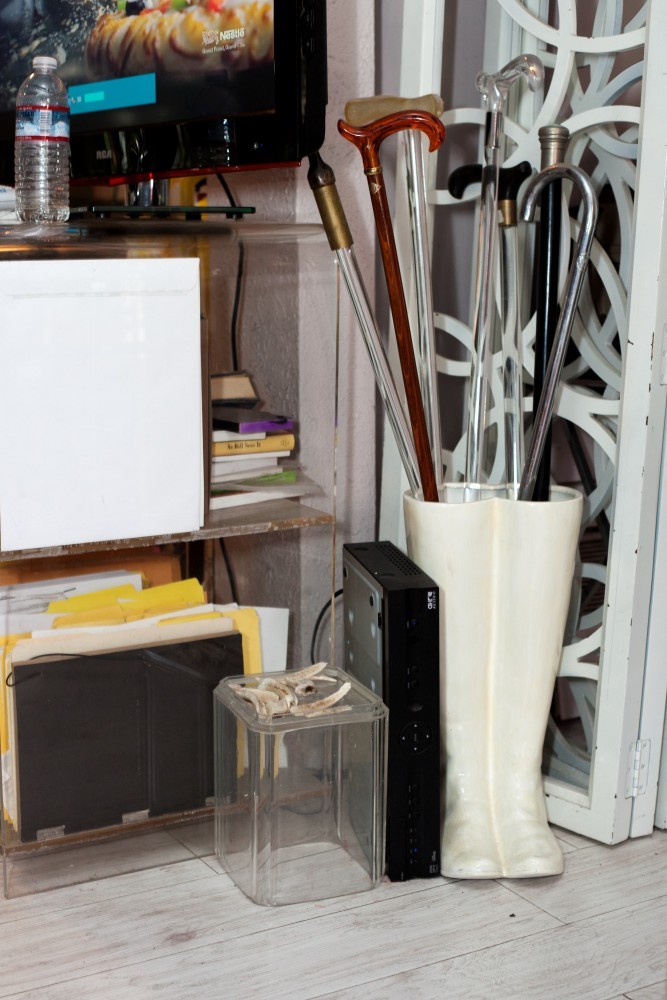 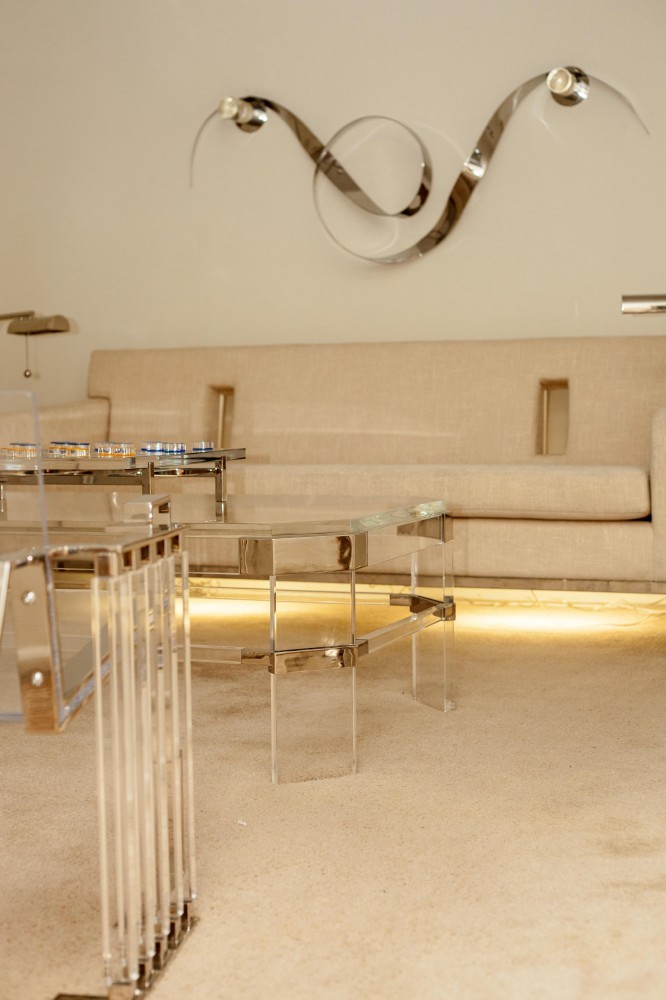 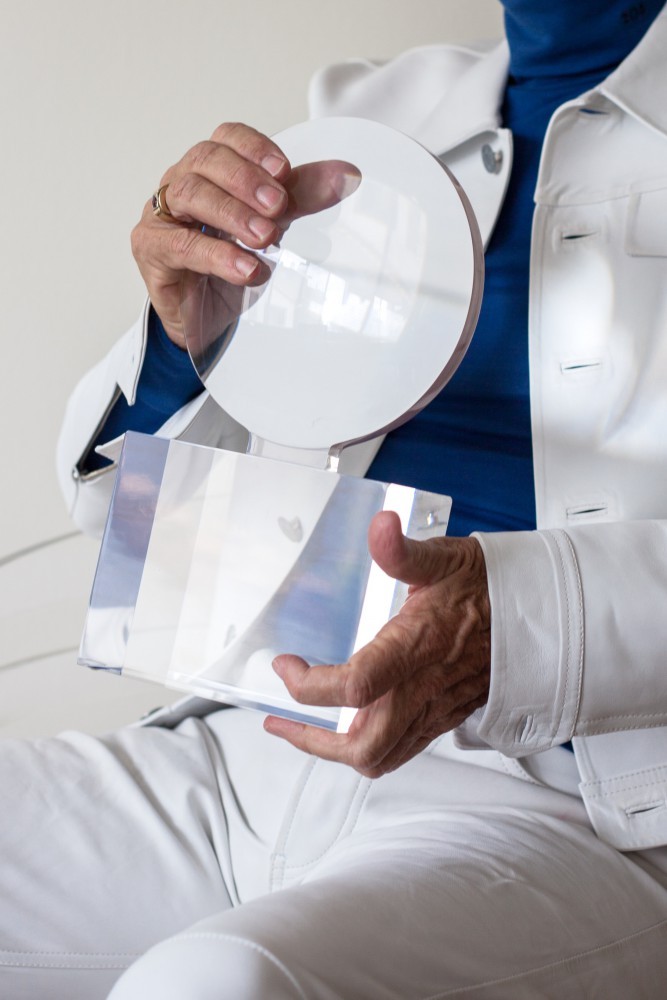 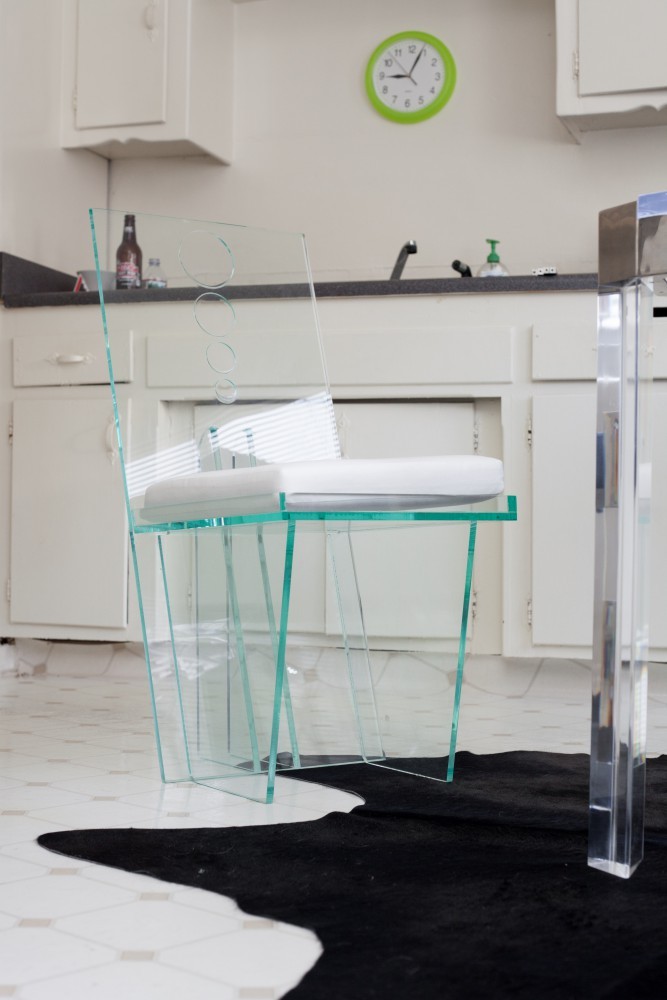 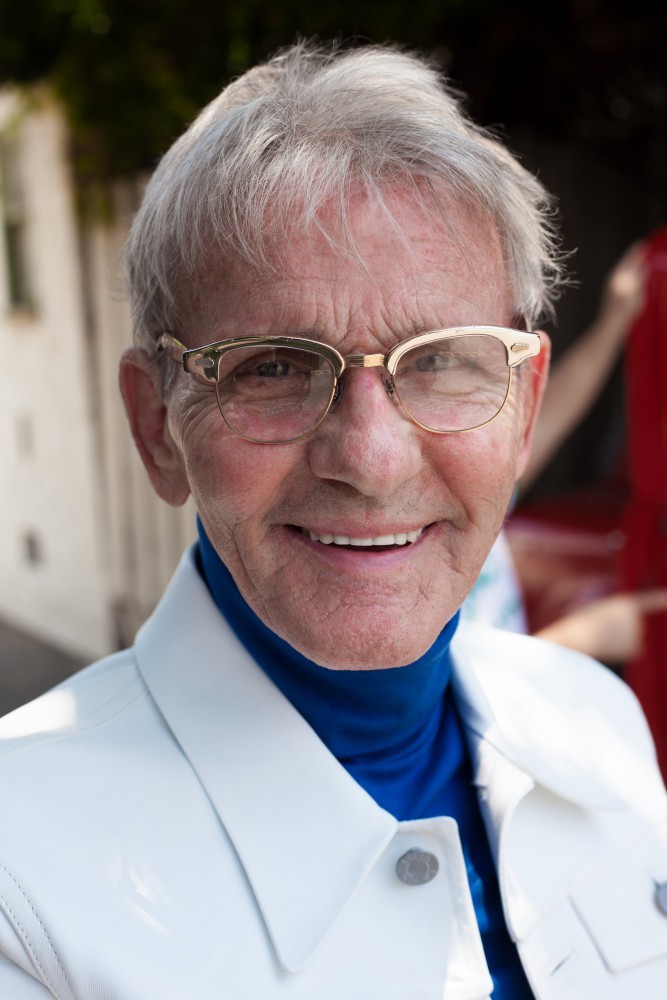 Los Angeles-based designer Charles Hollis Jones has an obsession with polymethyl methacrylate — best known by one of its tradenames, Lucite. In his 50-year career Jones has created over 1,000 designs, creating an aesthetic that is as American as apple pie: a pinch of his mother’s Indiana quilt patterns, a dash of Modernism, and an extra-large helping of over-the-top Hollywood opulence. His is a career fueled by bold-faced clients (Tennesse Williams, Sylvester Stallone, The Kardashians) and collaborators, including decorator John Elgin Woolf and architect John Lautner. PIN–UP’s Michael Bullock interviewed the sprightly septuagenarian in his home cum studio in Burbank, California, where Jones was also photographed by Ramsey Alderson, wearing head-to-toe Calvin Klein 205W39NYC (Creative direction and styling by Alessandro Bava).  Below are some of Charles Hollis Jones’s best quotes.

I love pie. That’s my pie stand right there. (Points to one of his classic designs shown above.) We don’t call it that because you’d never sell it as a pie stand. We say it’s a container, and then people put lemons in it… or nothing. But I get a pie delivered to me every Friday morning and by the time Monday comes I’ve eaten the whole thing.

I grew up on a farm, but my father’s main business was selling lumber. He owned a sawmill and sold patterns for houses. He gave you three choices: split-level, ranch-style, or a two-story. I would watch my dad take off the roofs and siding of a lot of bridges. In Indiana we had the most restored bridges in the United States. Seeing all that being taken off and then put back on again, I would think, “Wow, what a great lampshade that structure would make.

Why can’t we think of a table without saying the word “table”? How can I language that to a student or to myself. Let me pretend I’m teaching. I say, “Design me a structure that’s 18 inches off the floor and that can support a small bowl.” You’d be surprised what students come up with. I realized I could reconstitute my conception if I stopped naming things before I started designing. If I design a T-A-B-L-E without thinking of the name then I can pretend I’ve never seen one. I started thinking that way and I never came up with four legs.

Tennessee (Williams) brought me a lot of good ideas. He said, “Charles, take a look at my play to get inspired!” In The Glass Menagerie his sister is obsessed with glass swivel sticks, you know, what you use to stir drinks with. So I thought I would make a Lucite chair that looked like a glass swivel stick. At the time Lucite didn’t come with green edges. What I had to do was dye the glue and put it on the edge of the Lucite and then polish it. We called it the Wisteria chair.

The first time I met Tennessee he visited my showroom and asked, “If I buy one of your designs from you will you have a drink with me?” I told him, “You don’t have to buy anything of mine, we’ll go have a drink anyway.” He was crazy though. Drug addict, alcoholic, he loved whiskey, although I never saw him drink until after three in the afternoon. He was famous for his drama and he even loved to create it in his own life. He’d say to me, “We’re going to Jane Fonda’s tonight and they’re gonna read my script. And at some point I’m going to get up and tell them it’s the worst thing I’ve ever heard in my life, then I’ll pretend to fall, and you’ll say, ‘I’ve got to take him home,’ and we’ll leave.” It was always choreographed ahead of time.

John Lautner would say to me, “Charles, you build a vista for me. So I can build the abstraction.” That’s the way he said it, and I still don’t know what he meant. I think he was happy that if you put one of my chairs in one of his rooms you could see through it and still view the rest of his room. He liked that you could see his work through my work.

Excerpts from an interivew by Michael Bullock. For the full version check out PIN–UP 23, Fall Winter 2017/18.