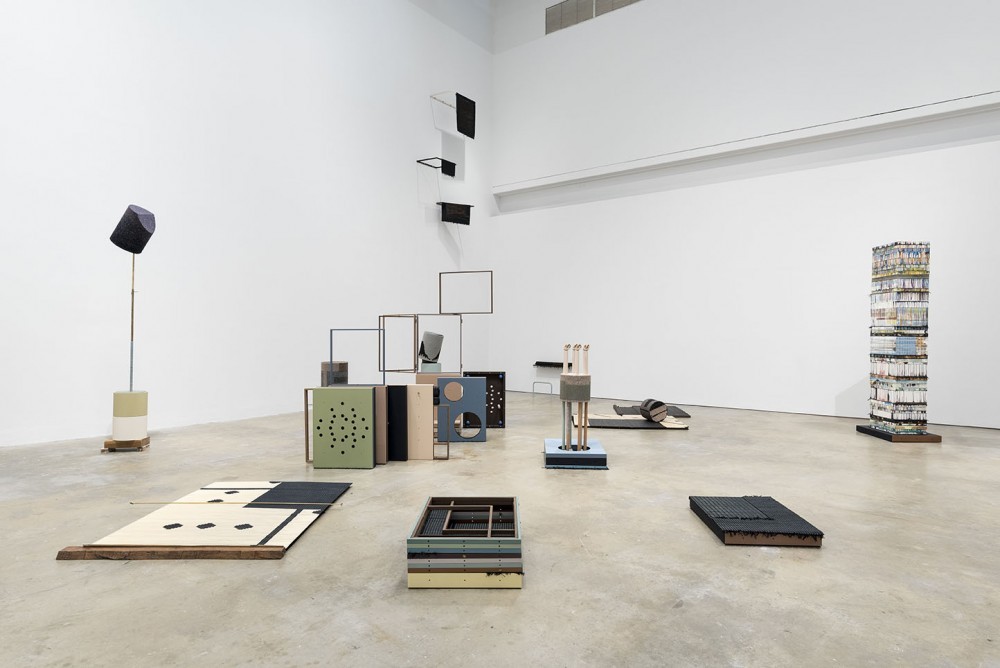 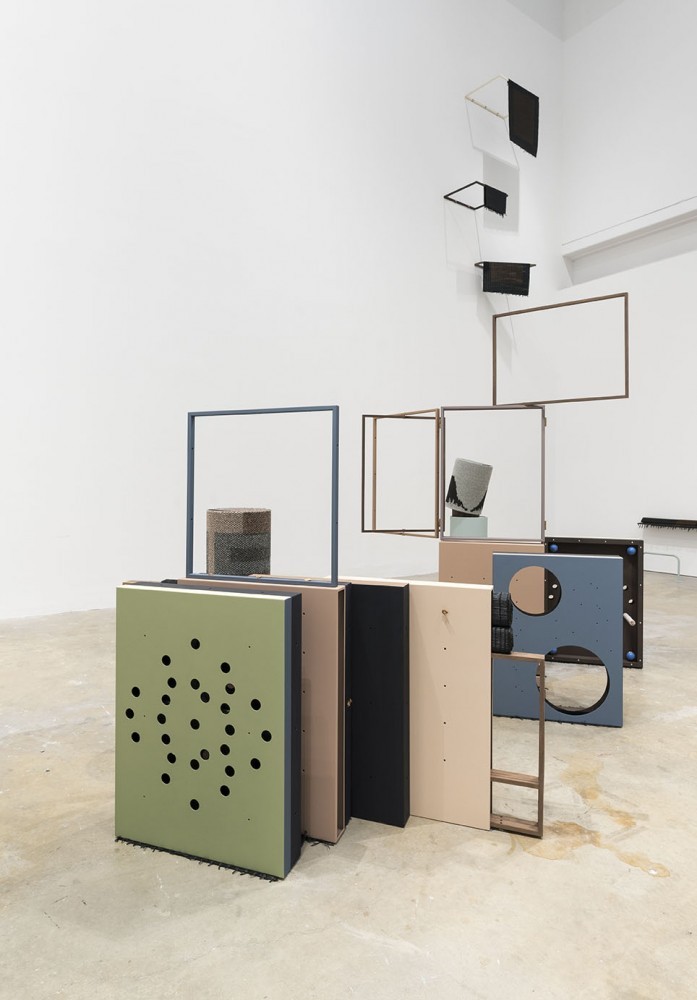 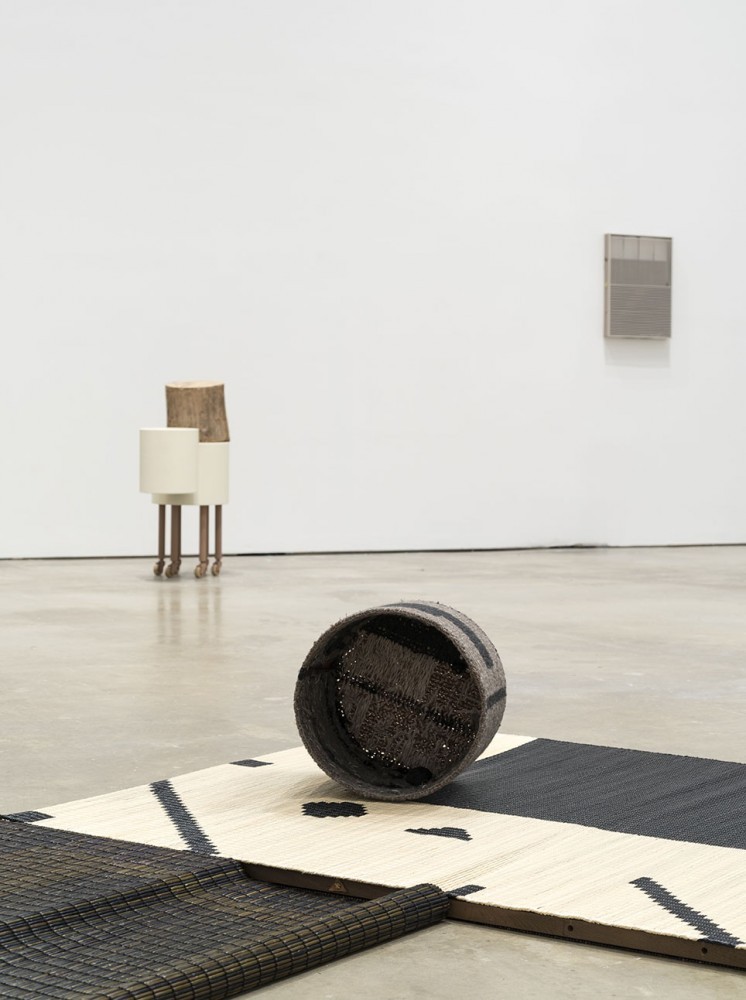 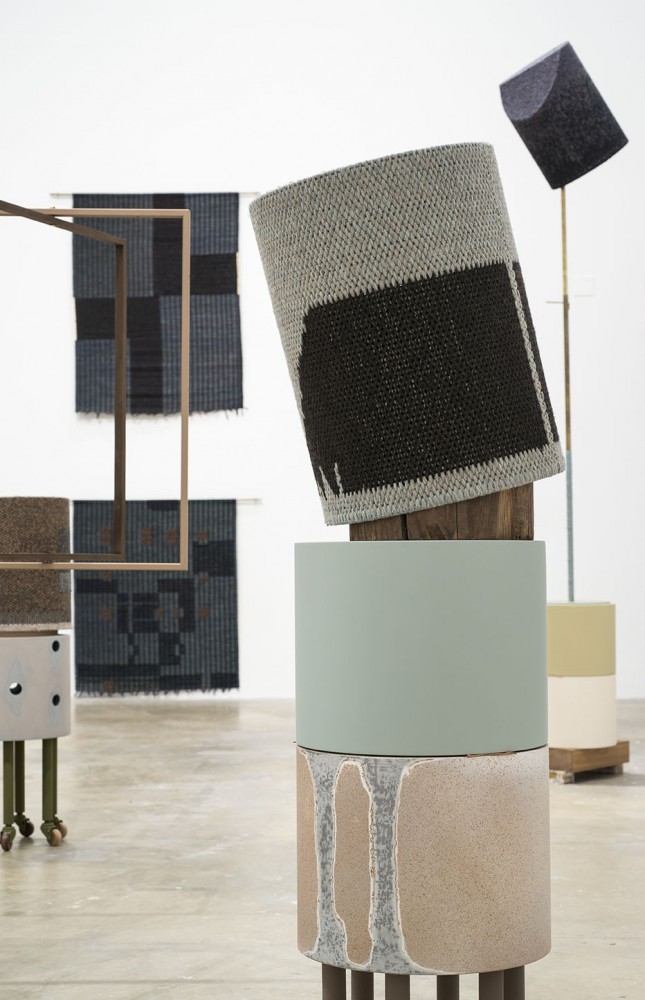 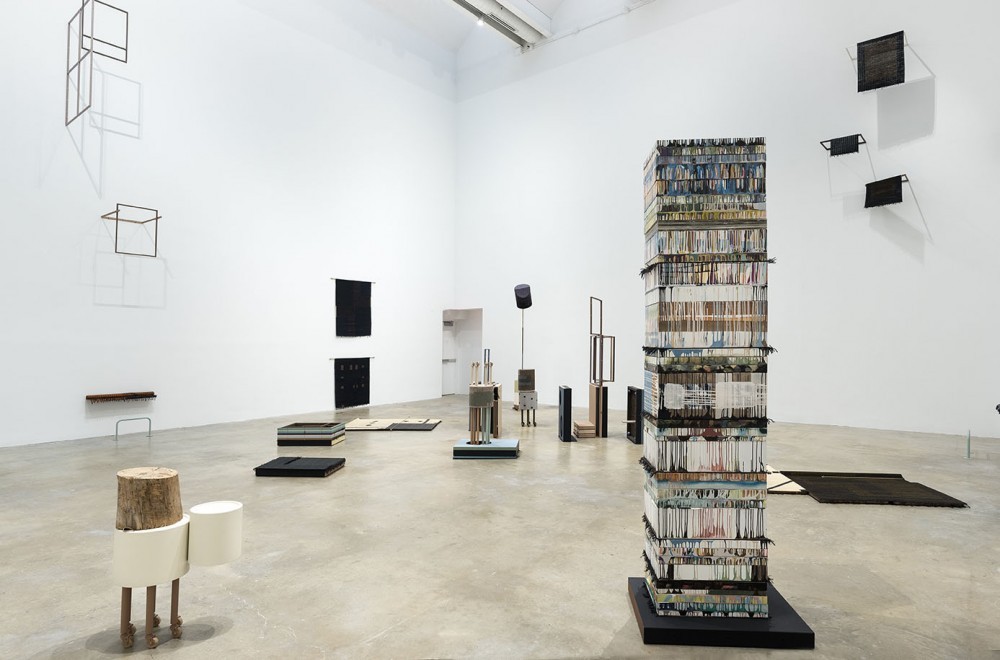 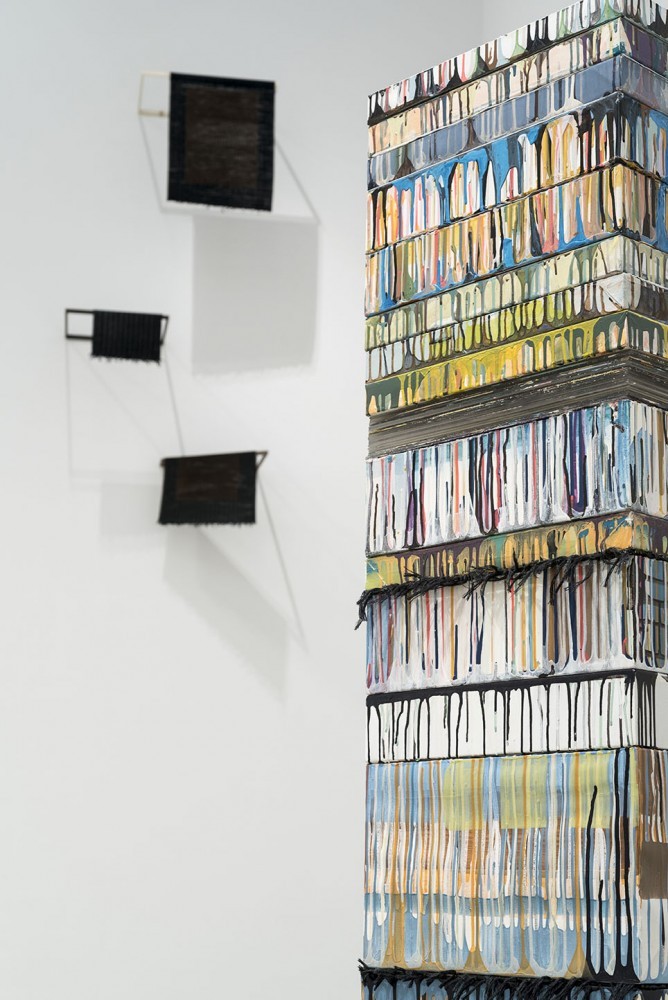 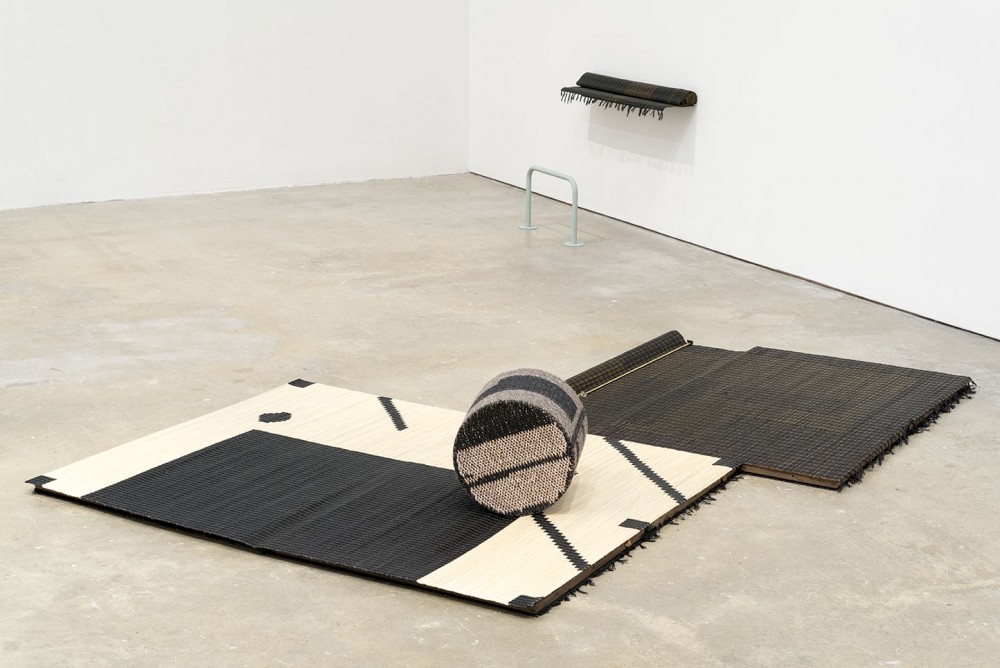 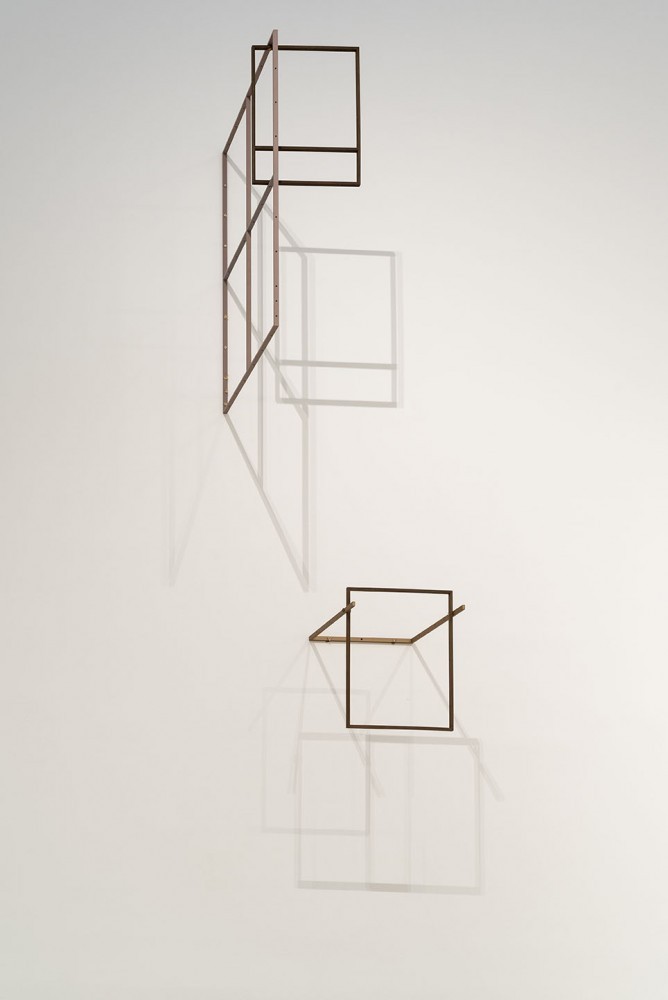 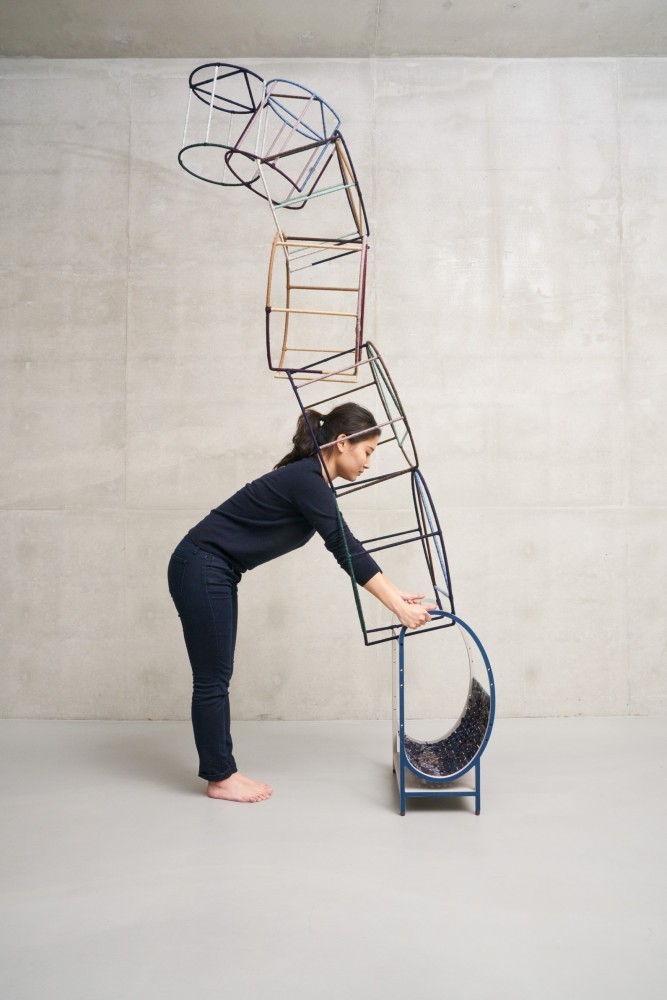 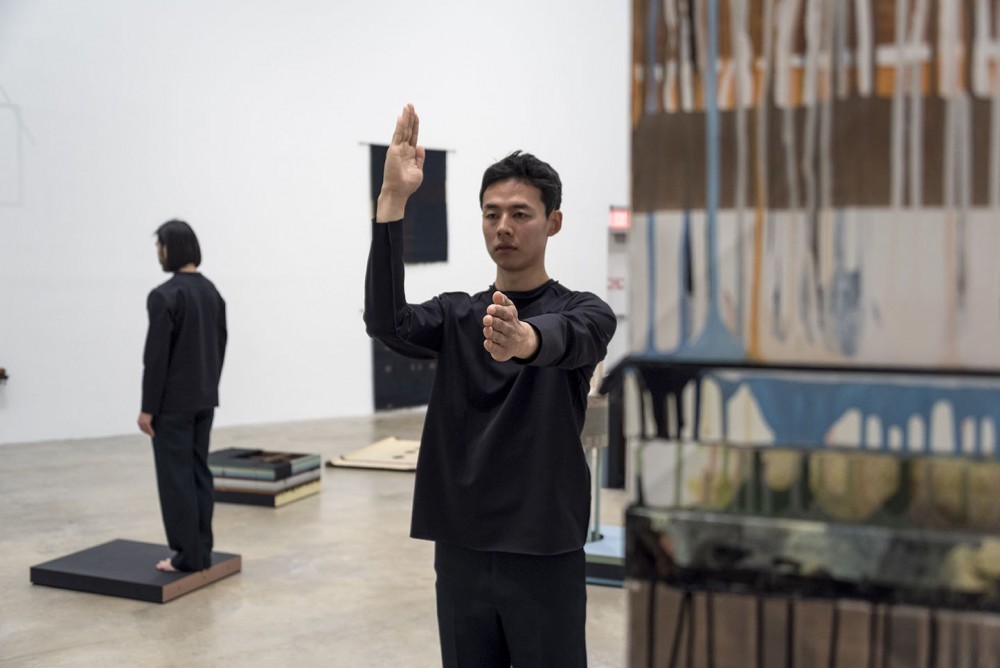 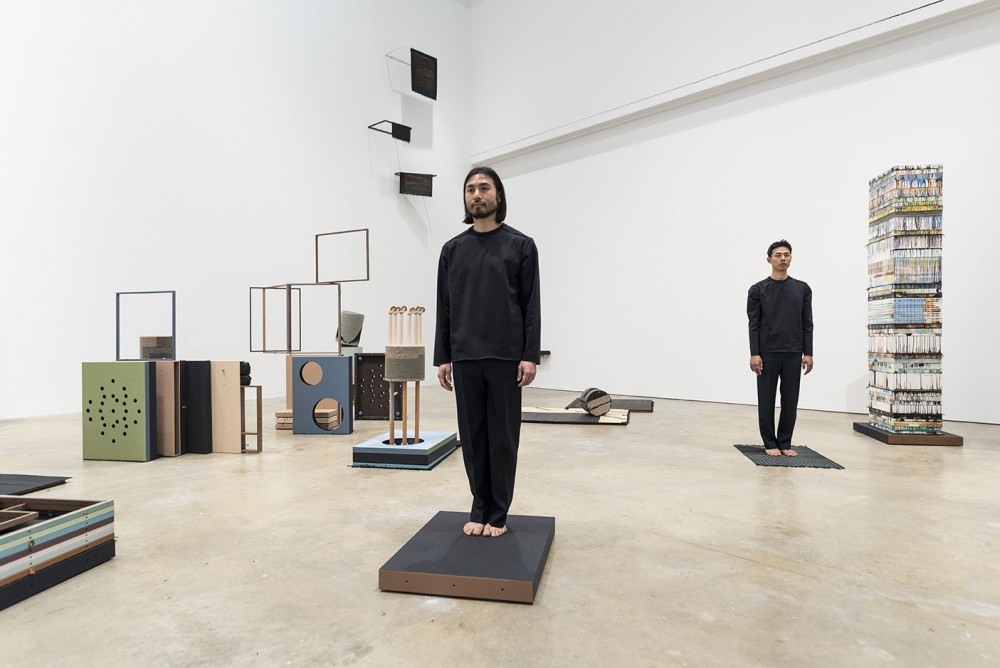 Seoul-based performers Heyongjun Cho and Hongseok Jang conducting a special activation of artist Suki Seokyeong Kang’s work during opening weekend of the exhibition Suki Seokyeong Kang: Black Mat Oriole.
Photography by Constance Mensh. Courtesy of the artist and the Institute of Contemporary Art at the University of Pennsylvania. 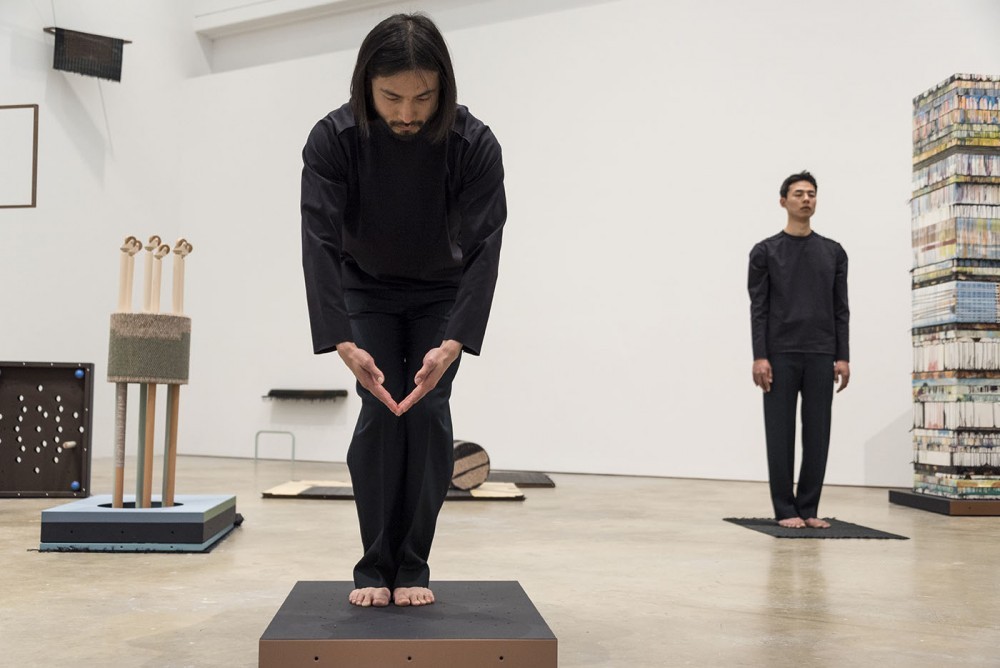 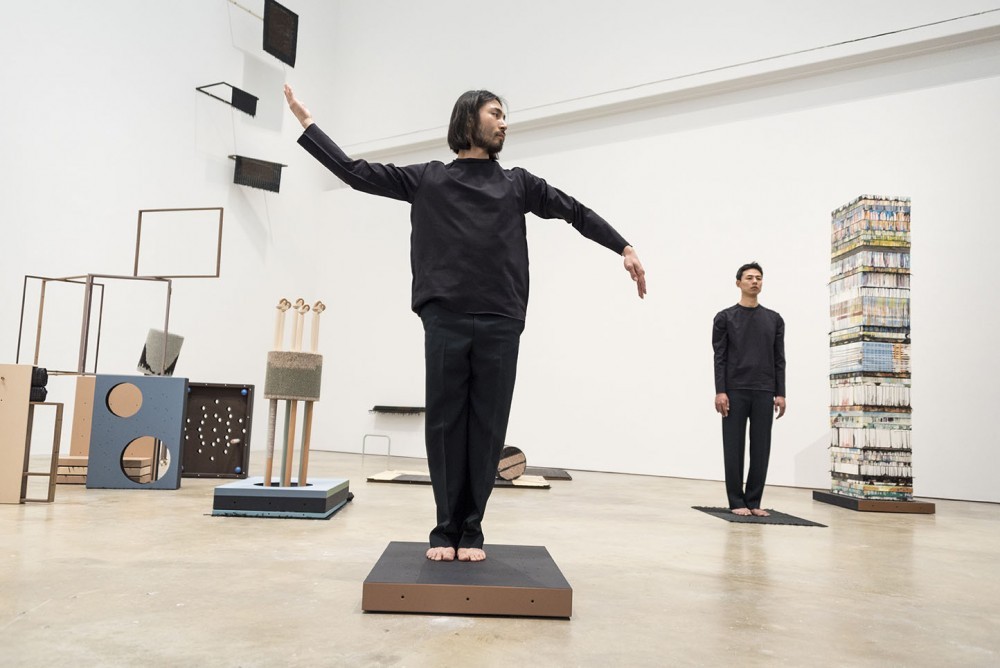 In her work, Suki Seokyeong Kang treats the human body as a kind of interface between built environments, objects, and movement. The Korean artist produces seducing objects and immersive installation environments in seemingly undecipherable systems of order, activating them through choreography both in situ and on camera. Abundant in grids and units, her work may on the surface seem to hint at the legacies of minimalism and modernist industrial design — but much more laboriously, Kang mines histories of pre-modern Korea, bringing rare courtly dance forms and archaic music notation systems into the realm of contemporary art. After a stellar presentation at the 2016 Gwangju Biennale, Kang is now subject to her first U.S. institutional solo exhibition at Institute of Contemporary Art, Philadelphia where a traditional domestic mat unfolds as the material basis for an entire philosophy of bodies acting in space.

Your use of polished wood and powder coating evokes an industrial aesthetic, yet they’re continuously interrupted by traces of the hand. How do you think about materials and form?
There is a process to how I resolve form and color within the unit systems that comprise my work. It looks simple from a distance, but there is actually a specific logic underlying each decision. For example, in the Grandmother Tower series, the weight, texture, size, and form was determined from a discarded tree trunk’s diameter, height, and weight. In the early stages of the project, I figured out the center of gravity in my works by referencing the measurements of found objects. Each object in my installation Black Mat Oriole, for example, includes colors derived from my series of paintings. In order to get the desired hues I sometimes grind the sides of the powder-coated surfaces and/or wrap them with multi-colored thread.

I heard that you have a rule that all of your objects have to be liftable by yourself, meaning that they’re effectively defined by limits of your body. How would you describe how your objects relate to the body?
The size and weight of each unit is developed so as not to exceed the dimensions of a standardized human body. Each object has its own name, such as Heavy Round, and Warm Round — and when the units are combined, the works can be renewed with titles such as Round Cliff and Poking Square. Most of the objects have units of sustainable weight, width, and form and they correlate to a previous body of work. I originally started Grandmother Tower as a way to depict my grandmother’s posture, before her passing. I perceived her body as a frame that only refers to her form in a beautifully humorous way. Even if her life was nearly gone, she always tried to stand as straight as possible even she had no strength in her body. Despite her elegant figure, I remember that she did not have enough energy to stand on her own and needed to lean on something. The piled objects are made in the same height as my grandmother and stand by friction created by the threads wrapped around them; the thread covering up colors and leathers on the surface produce more friction between the units.

Black Mat Oriole, your exhibition at the ICA, is the manifestation of five years of research. Where did this process lead you — across performance, design, and art history?
In producing a work, I do not have a master plan to make a single completed outcome. This project started with reconsidering my other painting, Black Mat, as a form of movement. I researched archaic resources and met with an initiator of Chunaengmu, a royal dance conceived in 1828 by Prince Hyomyung of the Joseon Dynasty (the last dynasty of pre-modern Korea, 1392–1897) to ask questions on how and why this traditional language of movement came into our present time.

Could you explain the practice of Chunaengmu to an oblivious outsider?
The Chunaengmu is a traditional Korean royal court dance featuring only one-person. The name literally translates as the “dance of a spring oriole.” As a solo dance, a very rare form among Korean royal dances, it is a collection of extremely refined movements performed within the confined space of a mat called Hwamunseok — a small square-shaped woven mat made with reed, a cultural heritage inherited from the Goryeo period. While it functions as a traditionally crafted square mat, in the Chuangemu dance it becomes a kind of delineated space for the dancer to perform within. This translates into a platform for the narrative behind my work, Black Mat Oriole. Here, this square mat represents a minimum space and a ground where an individual expresses his or her own voice at a slow-pace. Black Mat Oriole begins with the notion of encompassing one’s weight and movement in a square grid, which then becomes the new series, Mat Black Mat. This work does not focus on generating limited meaning, but instead expresses the persisting possibility of the process of systematizing one role through the body, gaze, and position within a given space. The Mat Black Mat regulates and standardizes the size of my paintings.

In contemporary Korea, Hwamunseok mats are mostly mass-produced, often outside the country. Do you think about production and craft as something you wish to represent in your work?
Yes. Ganghwa Island is renowned for its handmade mats and other reed craftwork thanks to its abundant reed cultivation and highly skilled weavers. People who live in this island used to craft Hwamunseok at home on a daily basis. But this tradition has faded due to the mass-production of the mat. I value the vanishing craftsmanship of Hwamunseok and wanted to translate it into an individual’s spatial significance. I found three female artisans who still make Hwamunseok the traditional way, and started working with them for this ongoing project.

In your video work, your objects appear as props to dancing bodies. In this way, you seem to muddle the idea of a sculpture, décor, and functional interior design objects. How do you consider the use or function of your objects?
My video work comes with a specific detailed scenography. For example, every three channels in Black Mat Oriole is a self-perceived black rectangular space. Inside each of the three channels of the video — themselves squares — the activators and the works shown slowly and softly move one another to wander across each square. The invisible grid inside of the screen and each work’s distinct weight, height and form, control the space. The video represents another black rectangular space in my work. There are developing actions in the black space under a rule of invisible and rigid grids. These actions incorporate a single unit of time for the development and the view of every action toward the state of balance through two opposing concepts of mediation and tension within the invisible black space. All processes used in the video include paintings, units of installation and collected objects that fill up and empty the space by activating movements of an individual.

As a former student of the RCA, which is famous for its School of Design. What’s your relationship to interior and furniture design?
Even though I include everyday objects that often come from the domestic sphere, I am not explicitly referencing industrial design in my work. Instead, I am much more interested in how shape, form, and weight relate to the narrative of how an individual navigates space.

One could translate your interest in delineated space into a discourse of politics of space, control, and spatial transgression. Do you welcome a political read of your work?
When I approach my art-making process, I consider looking and thinking as two starting points. Expressing how these two aspects “do” and “act” as a work is the least I can do as an artist in our society. Also, “doing” to me does not end at finishing one work but includes the process of continued research and efforts to make the work. Though some of my works convey the time put into my works process, there are instances when it is unseen. Even if the process is unclear from the finished product, I hope my viewers engage with their own thoughts and individual lives to find out what they want to and need to do to interpret the work. As they walk throughout the installation, I hope they would, in turn, question the artist and work: why I used such material, this shape and form. As their contribution to the “doing” part of the work, they will then answer these questions depending on their movement throughout the piece and share their thoughts and the present.

Black Mat Oriole by Suki Seokyeong Kang is on view at the ICA, Philadelphia until August 12, 2018.