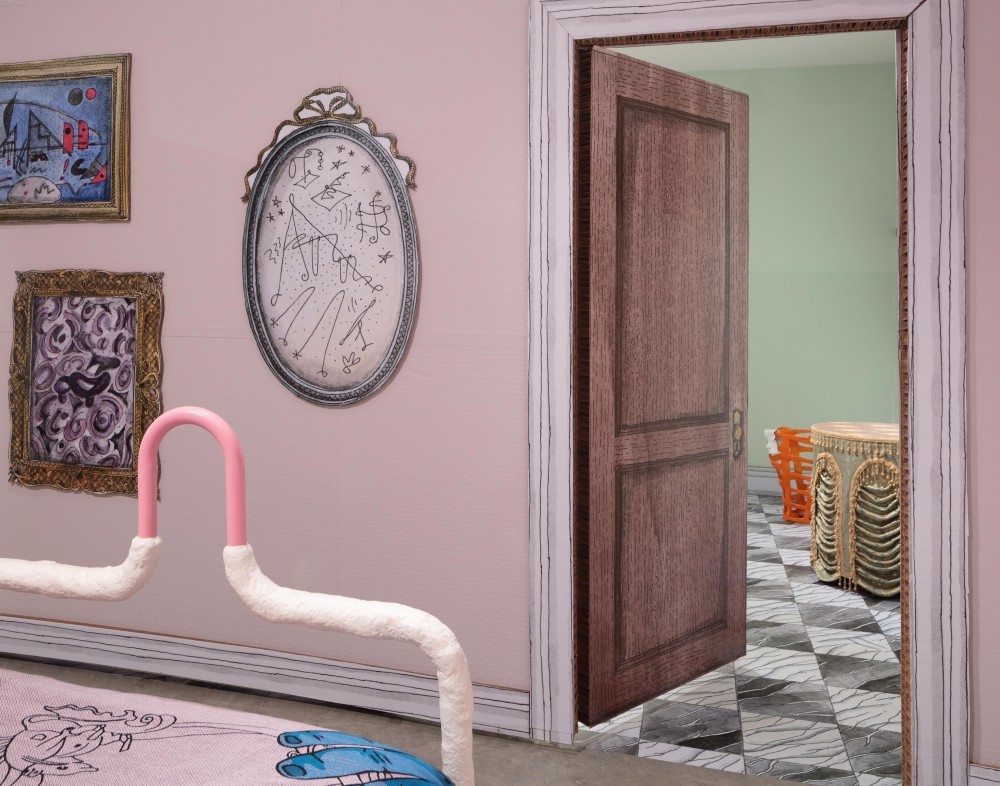 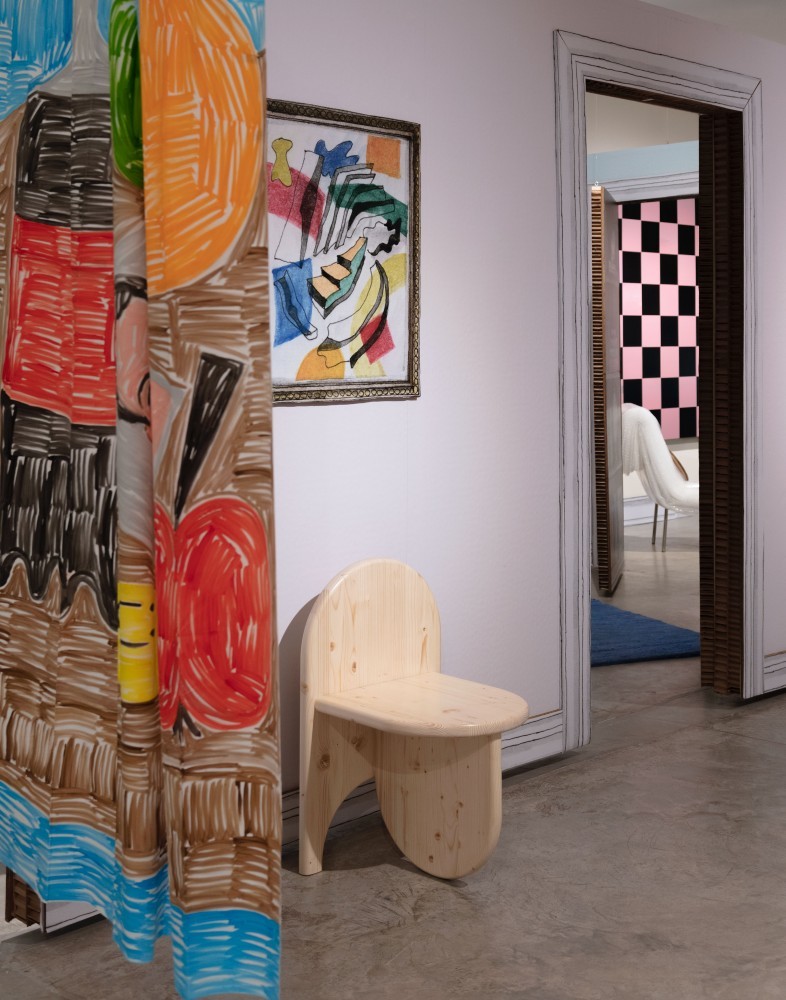 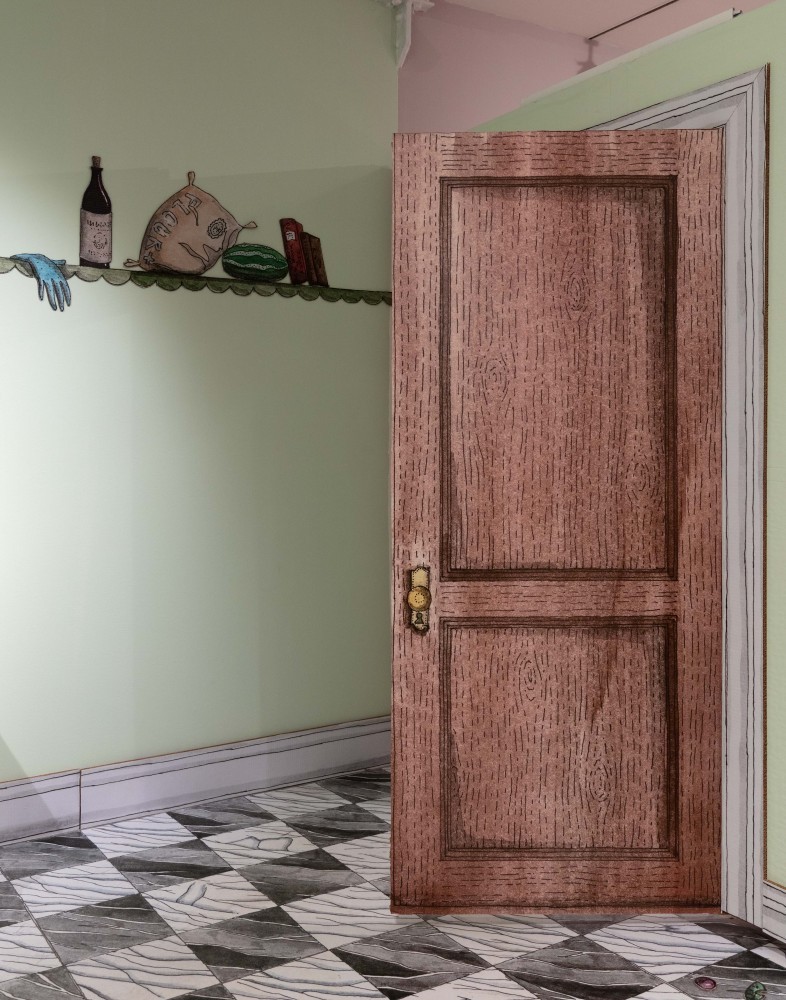 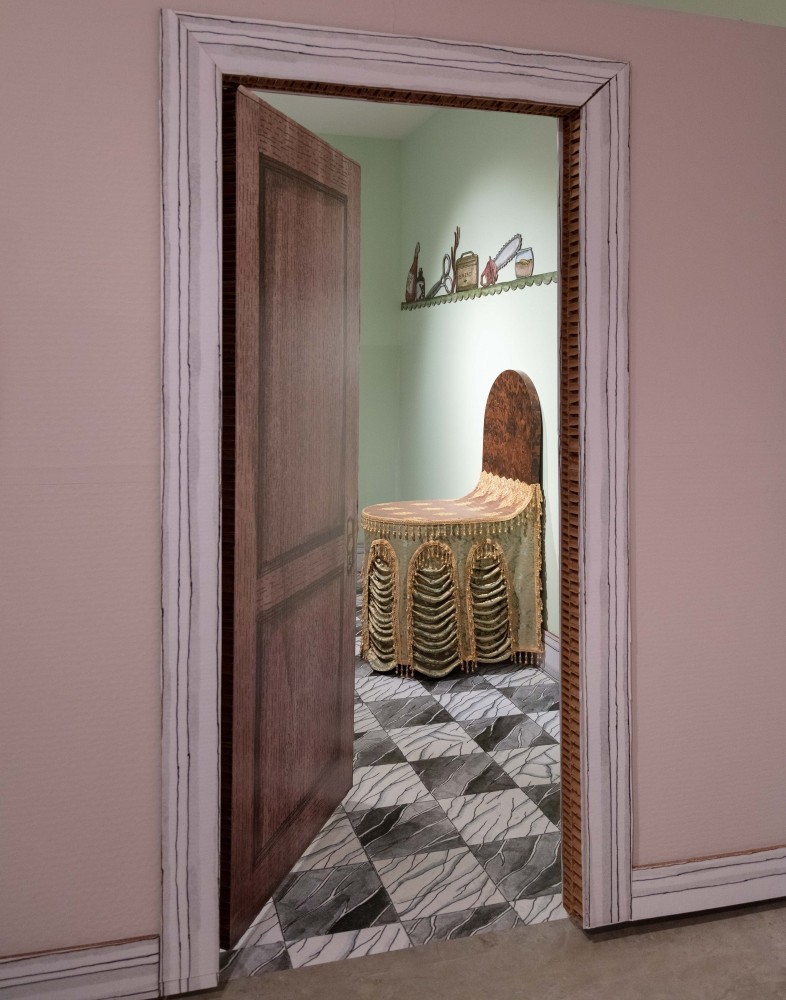 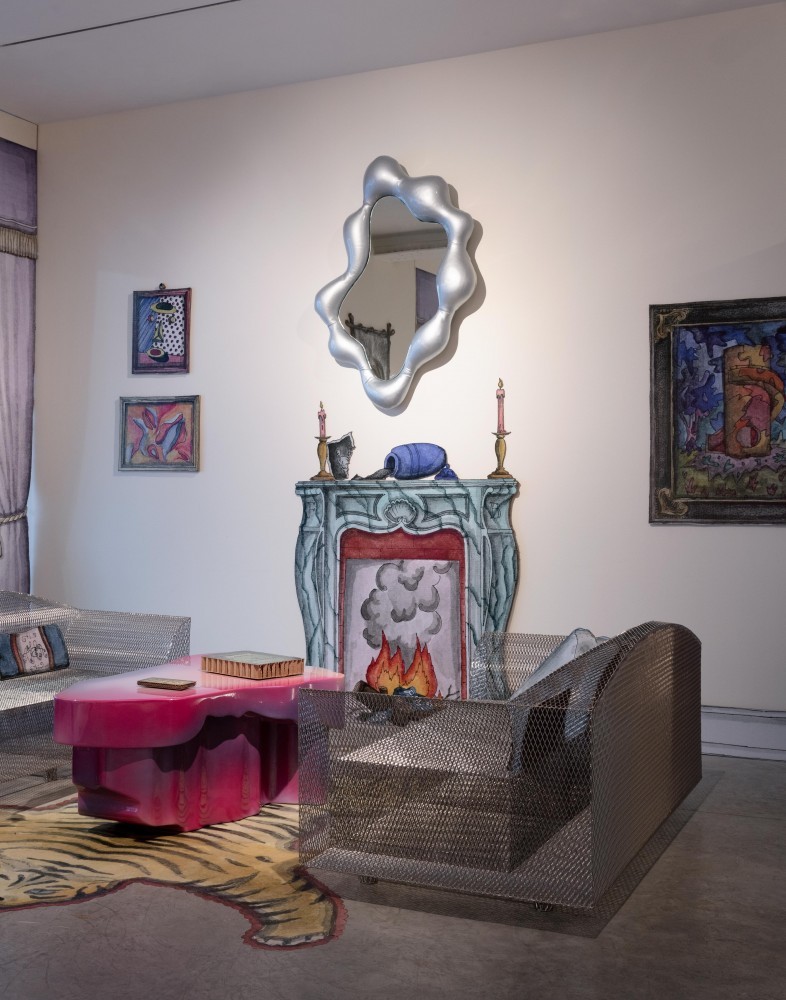 Living room view with two How High the Moon sofas by Shiro Kuramata and Guise 5 Spray Coffee Table, The Netherlands by Odd Matter (2018). Above the fireplace, a mirror by Misha Kahn titled Saturday Morning Series: Tumbling in Turmoil (2017). 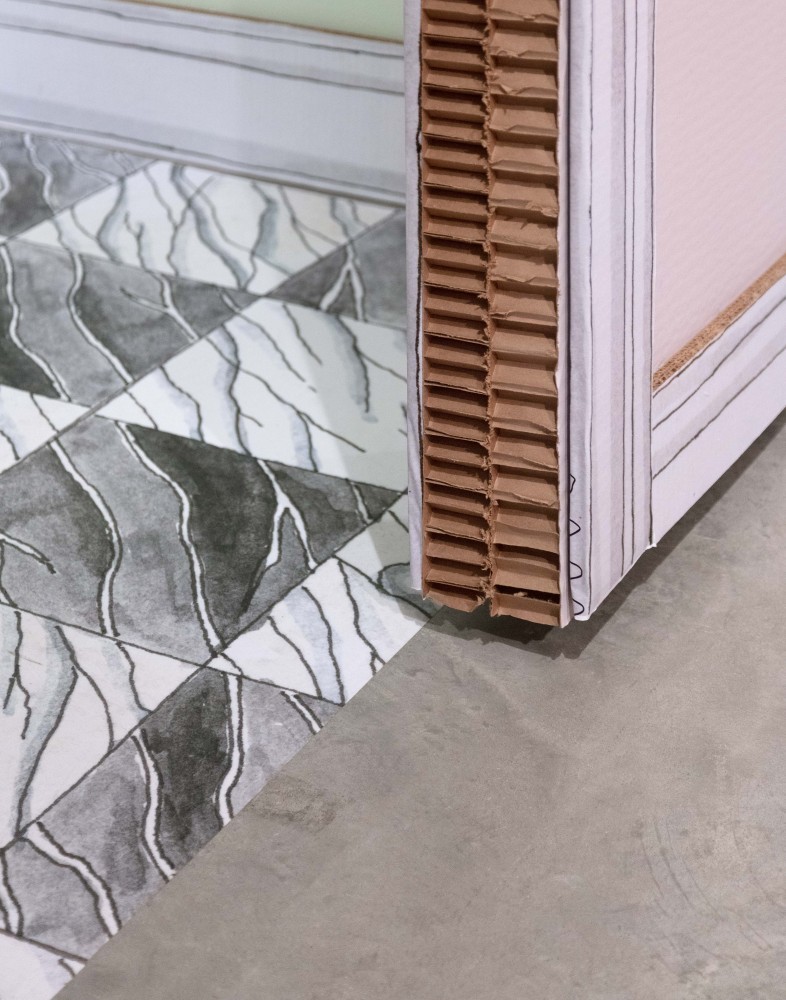 Detail view of Blow Up at Friedman Benda gallery. Photographed by Naho Kubota for PIN–UP. 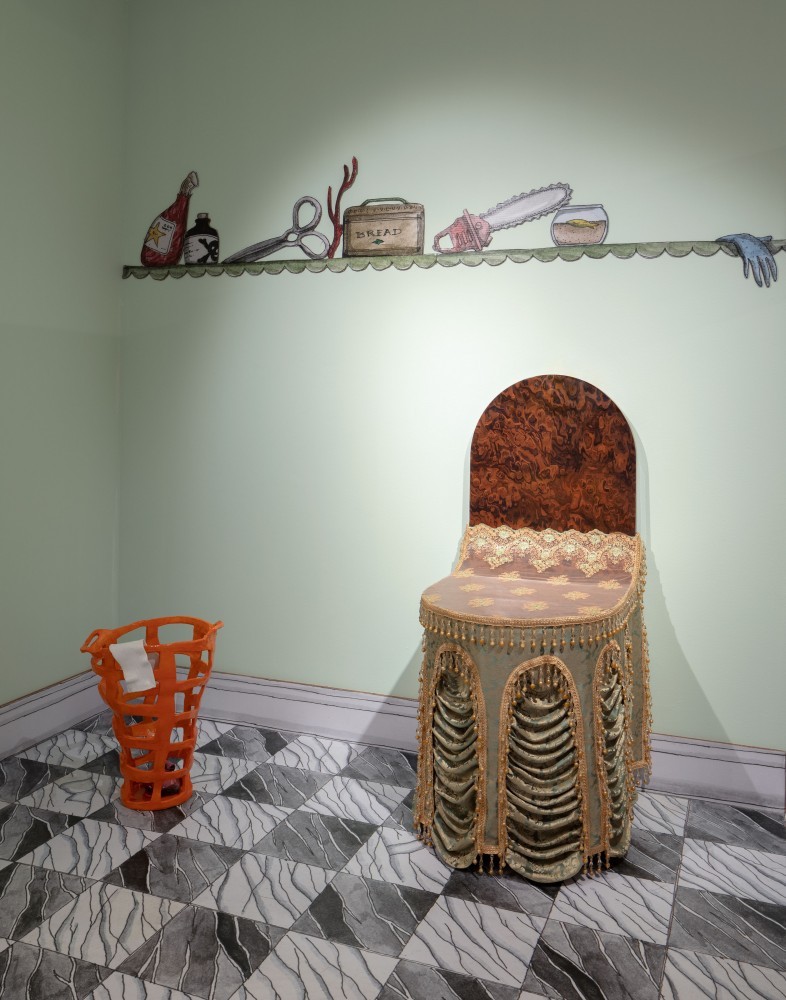 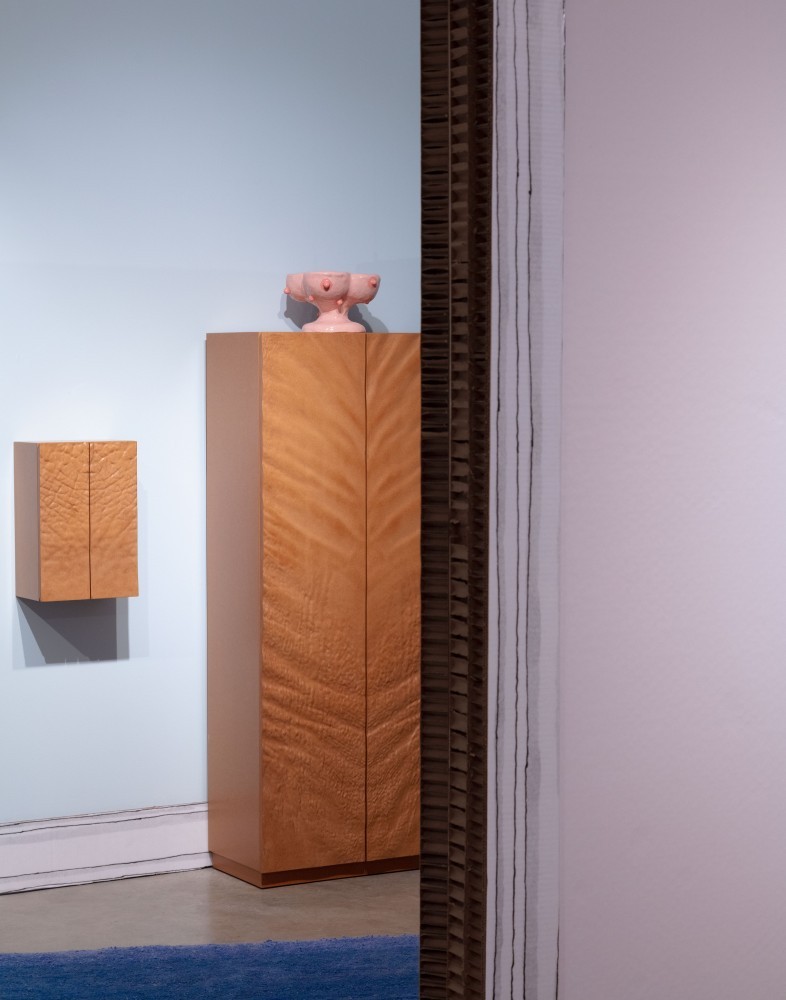 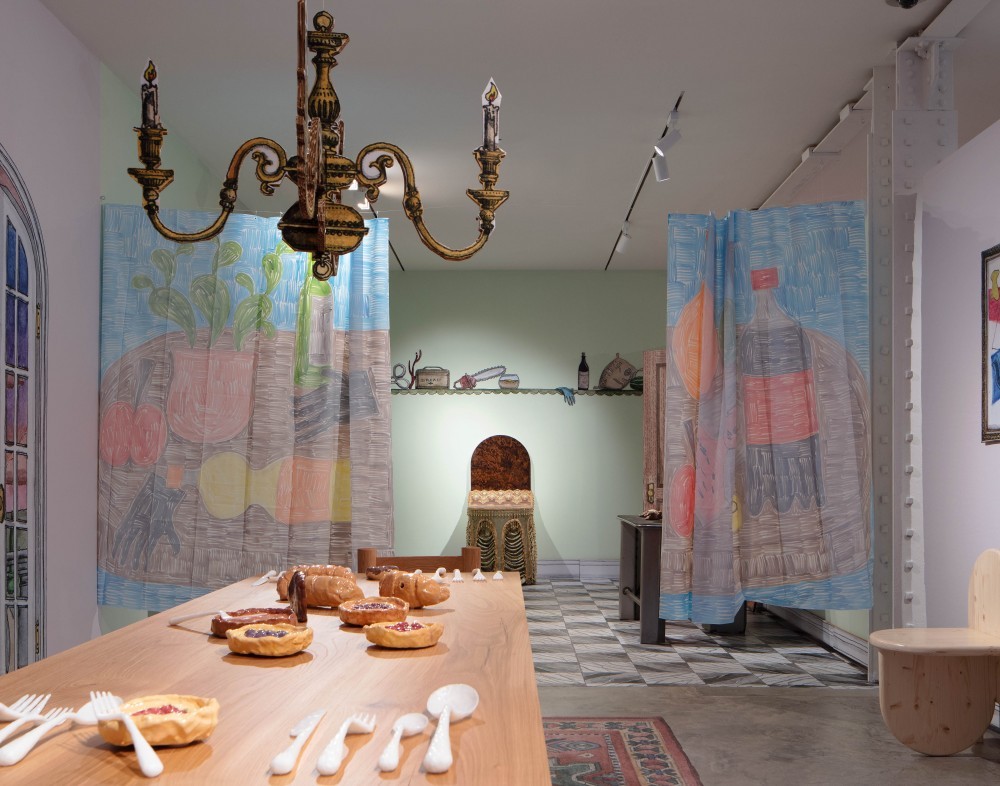 Luca Cipelletti, XYZ table (2018) with glazed ceramics by Larry Randolph and Oil Age place settings by Chen & Kai (2011). The Toilet Chair (2017) on the right is by BNAG. The Deluxe Edition chair (2018) in the background chair is by Sam Stewart.
The dining room is separated from the kitchen by Rade Petrasevic’s same as it ever was, 82 (2018). 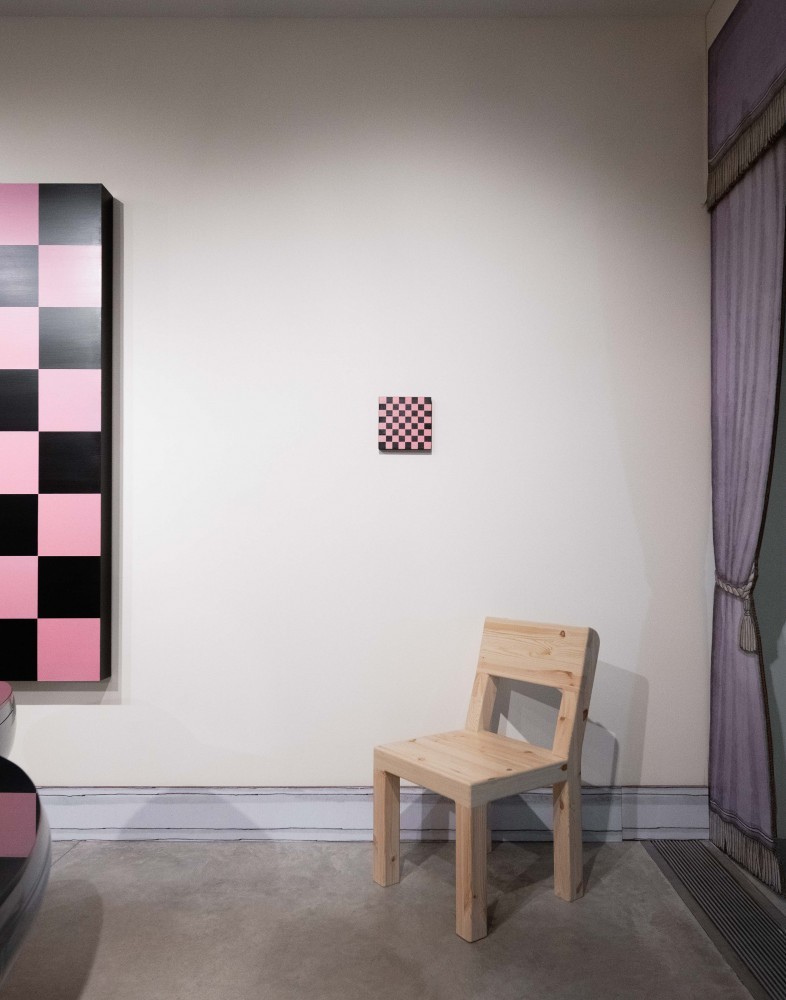 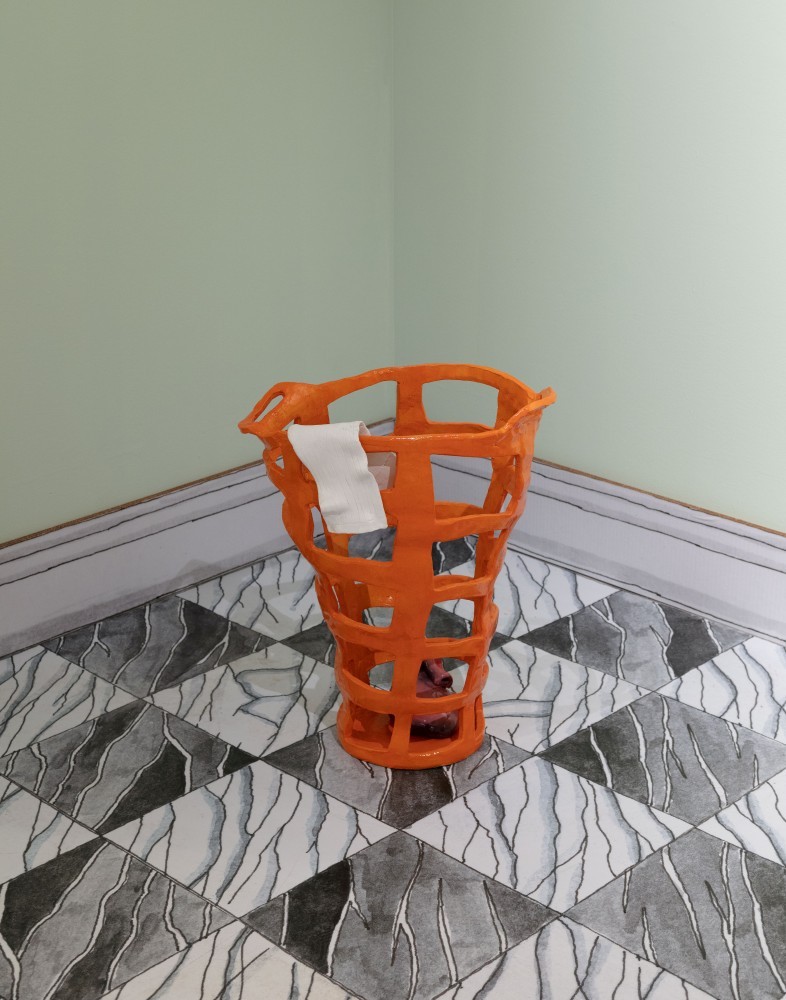 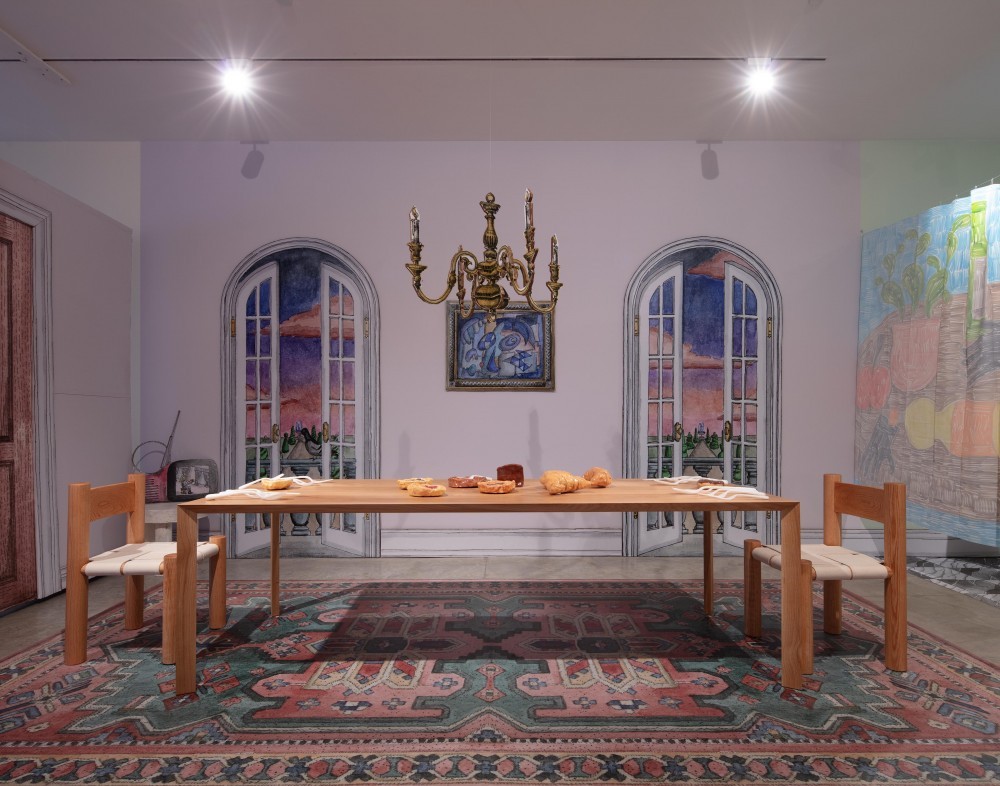 Katie Stout’s Tinder Chair (2018) sits at each end of Luca Cipelletti’s XYZ oak table (2018). Setting the table is a group of glazed ceramics by Larry Randolph (2018) and Oil Age serving sets by Chen & Kai (2011). The vinyl artwork is by Adam Charlap Hyman. 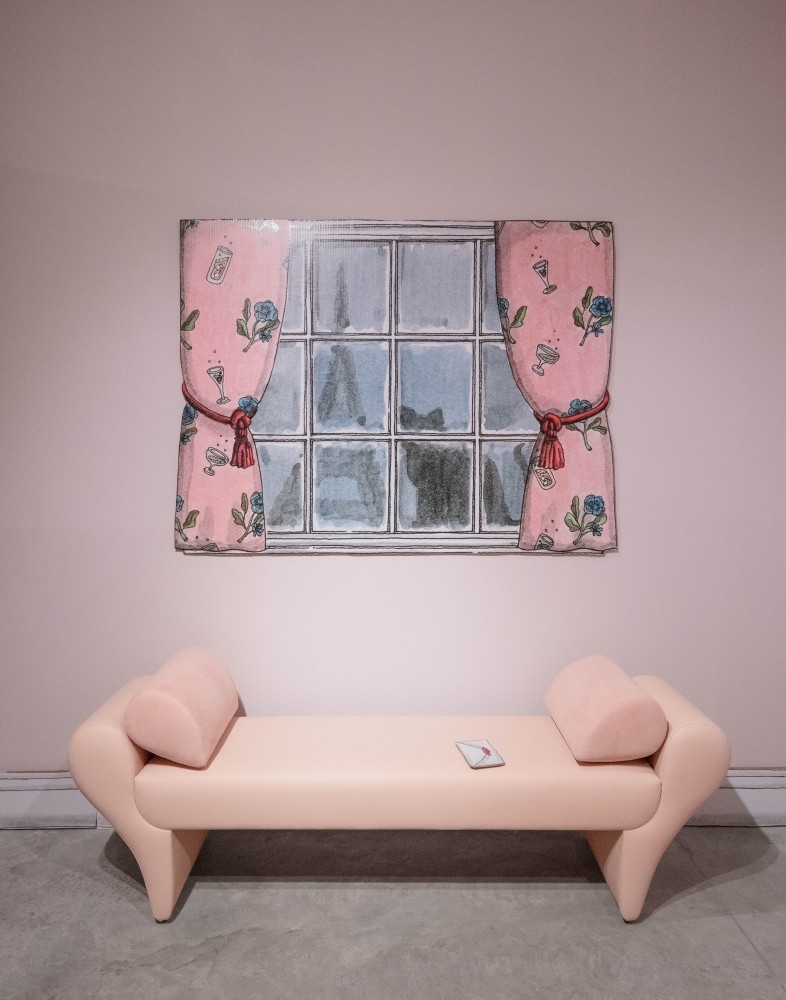 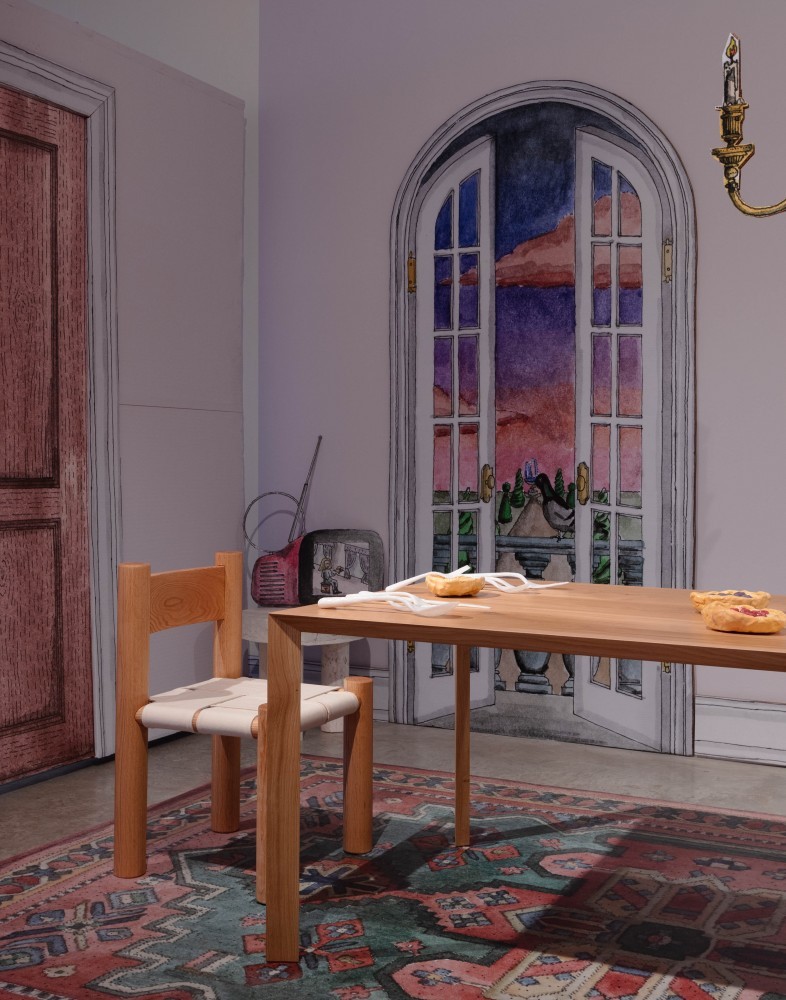 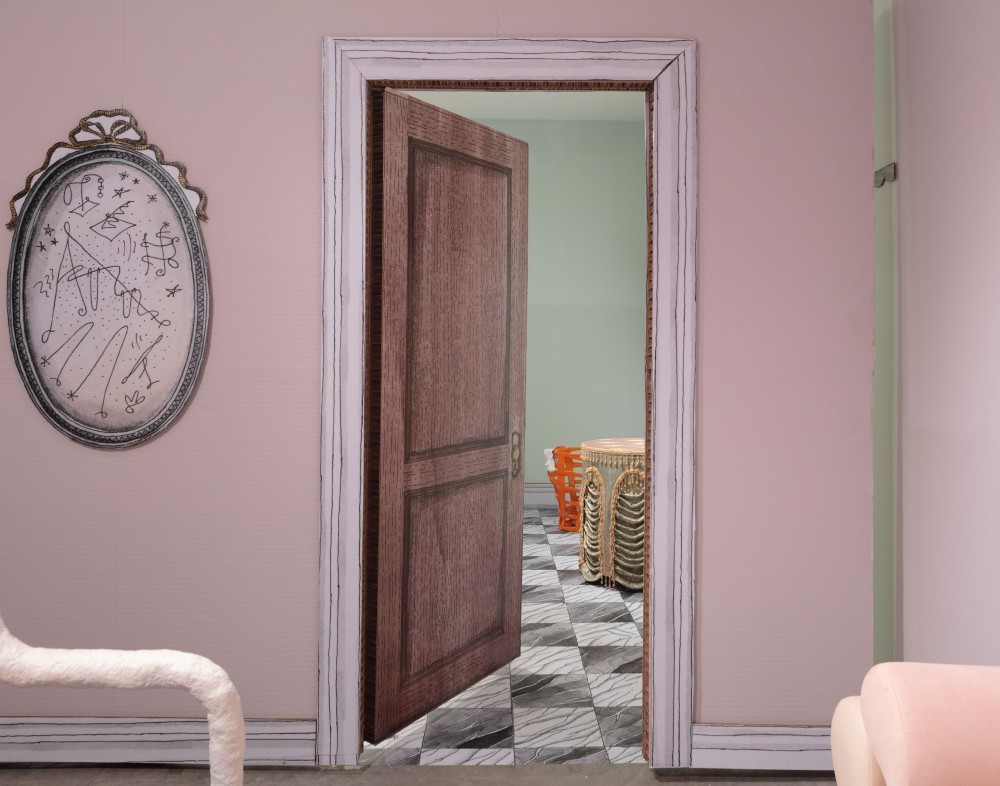 Exhibition view of Blow Up at Friedman Benda gallery. Photographed by Naho Kubota for PIN–UP. 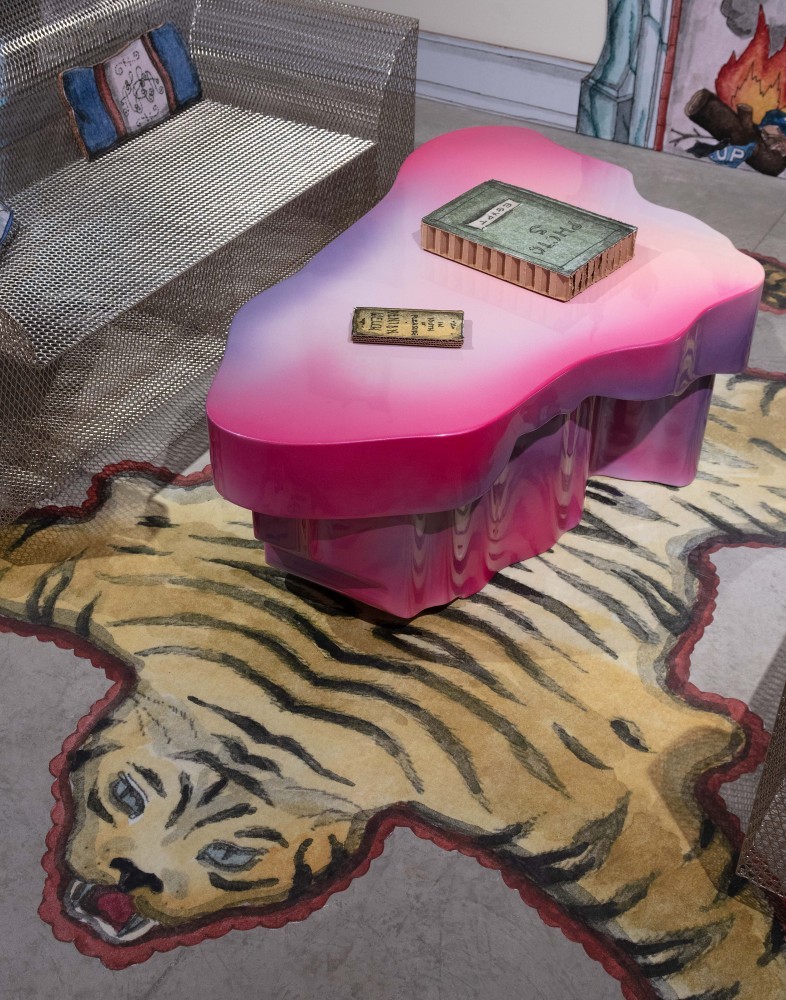 MEMORY LANE: An Exhibition about Design, Childhood, and Nostalgia

I found myself in a twist at Blow Up, a magical curio of a design exhibition at Friedman Benda, New York, on view in January and February of this year. I couldn’t tell if the show was a demand or an offer. It roiled me. Maybe it was both, like this lyric I prize from The Blow’s Brand New Abyss: “I’ll be a cool cave maybe you could live in my eyes.” When does anyone extend the doormat of love like that? Curated by PIN–UP founder Felix Burrichter, Blow Up was a thematic sister to his 2015 Pavillon de L’Esprit Nouveau: A 21st Century Show Home at New York’s Swiss Institute. Though both exhibitions used the home as a conceptual frame, the first looked forward to the collective euphoria of digital fabrication, new materials, and virtual social environments, while Blow Up cast, in its curator’s words, “a psychically charged eye on nostalgia.” It’s too soon to really understand how and why Postmodern aesthetics have resurfaced, but in this show Burrichter begins to stitch together a plausible story, as enigmatic as it may seem, that will interest future historians.

On display at Friedman Benda was a selection of original furniture and objects by an unpredictable menagerie of contemporary makers, artists, and designers, as well as historic gems from the gallery’s archive by Wendell Castle, Shiro Kuramata, Gaetano Pesce, and the Campana brothers. To unite this disparate collection, Burrichter envisioned the show through the guiding metaphor of a dollhouse, with corrugated-cardboard walls hung like stage flats from the gallery ceiling, dividing the space into domestic scenes like a kitchen, master bedroom, parlor, and nursery. The exhibition design, courtesy of Charlap Hyman & Herrero, transformed the proverbial white cube into a life-size illustration of a patrician home, complete with an antique brass dining-room chandelier, all cut from vinyl and cardboard — an ideal set for a community-theater production of any play by Noel Coward. If theatricality thrives in minimalism’s shadow, as critic Michael Fried implied in 1967, Blow Up replays the old dialectic in reverse. Checkerboard marble underfoot surely says elegance, but what if it’s a hand-drawn caricature of a marble floor, blown up, printed on vinyl, and stuck down on top of the real gallery floor?

Curatorially, Blow Up was risky. A onesie by New York fashion designer Telfar Clemens, a glazed ceramic in the form of a poultry carcass by artist Larry Randolph, and the precision geometry of a table by Milanese architect Luca Cipelletti, all shared a roof under this curatorial concept. What is it about a moment in culture when a painting on metal of an oversized chessboard by Sarah Ortmeyer, a goopy-framed mirror by Misha Kahn, a dancing crib by Soft Barqoue, and steel-mesh couches by Shiro Kuramata unite plausibly together? It’s good that the question can even come into focus, I think.

Long gone is the shock of a sewing machine and an umbrella on a dissection table, and yet Blow Up recalls First Papers of Surrealism, the first major exhibition of Surrealist art in the United States, staged in 1942 in the Italianate ballroom of a New York mansion. Marcel Duchamp famously entangled that entire show in a mile of string, making it very hard to see the works clearly, and for the opening instructed kids to play ball and hopscotch in the web. Blow Up captures a similar roving, childlike spirit. Without their workaday histories and commercial narratives, the pieces shown could have totally disappeared into the tangle of the show’s curatorial wild — but, in some uncanny way, they popped and collectively sizzled thanks to the playfulness of the set.

Blow Up testifies to a supple and determined orchestrator, who has brought serious fun and synergy to an intersectional family of designers, artists, and writers — there was an accompanying zine edited by Drew Zeiba (Blow Up Diary designed like a childhood diary by May Kim), a witty and poignant foil to the exhibition with its existential reflections on playing house and dolls from queer hacks of The Sims to the digital Juvéderm of Facetune. Blow Up fingered a hole in the back of my imagination, patted around a mental sanctum that’s sensitive to touch, a cave for love of design or what’s most true about design as a story not of objects but of persons. Love of what’s complicated, incongruous, capricious, and in desperate need of attention, sometimes.

All images by Naho Kubota for PIN–UP.