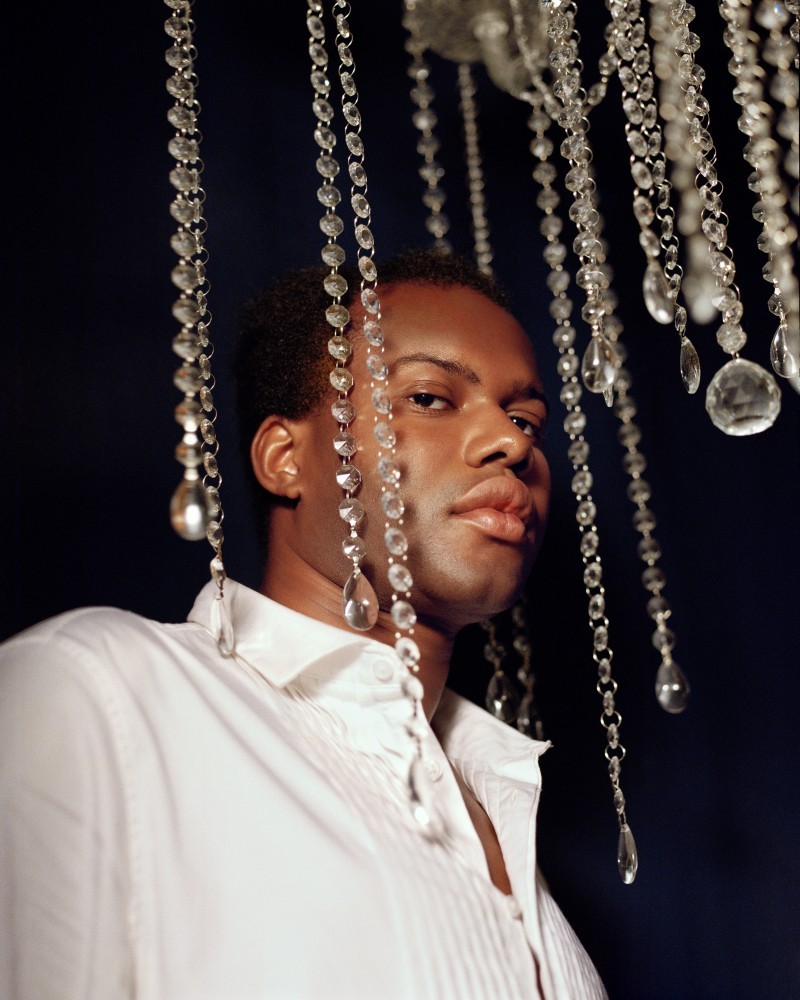 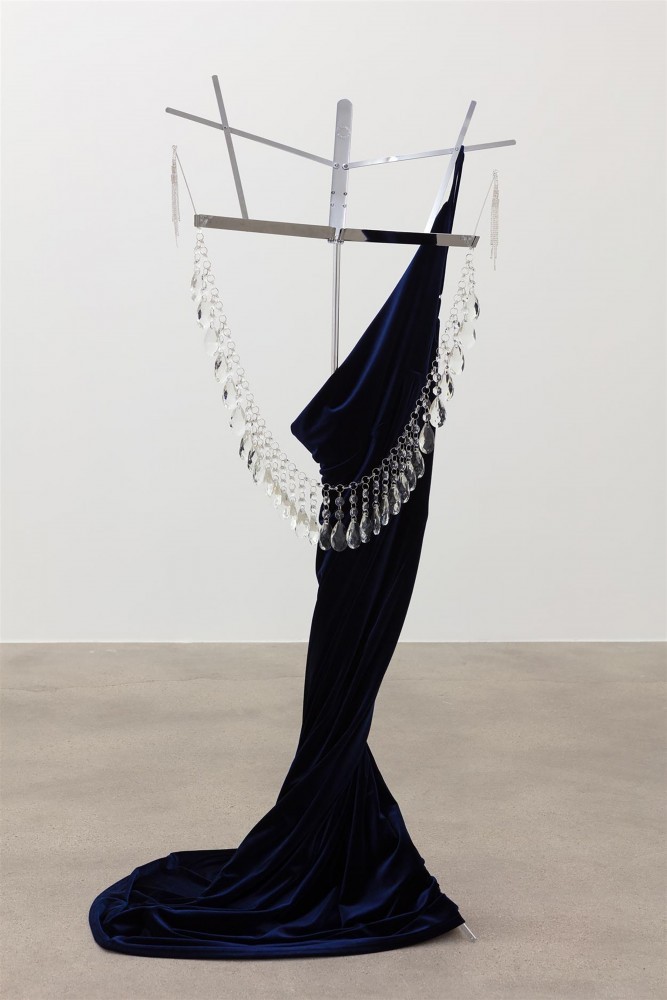 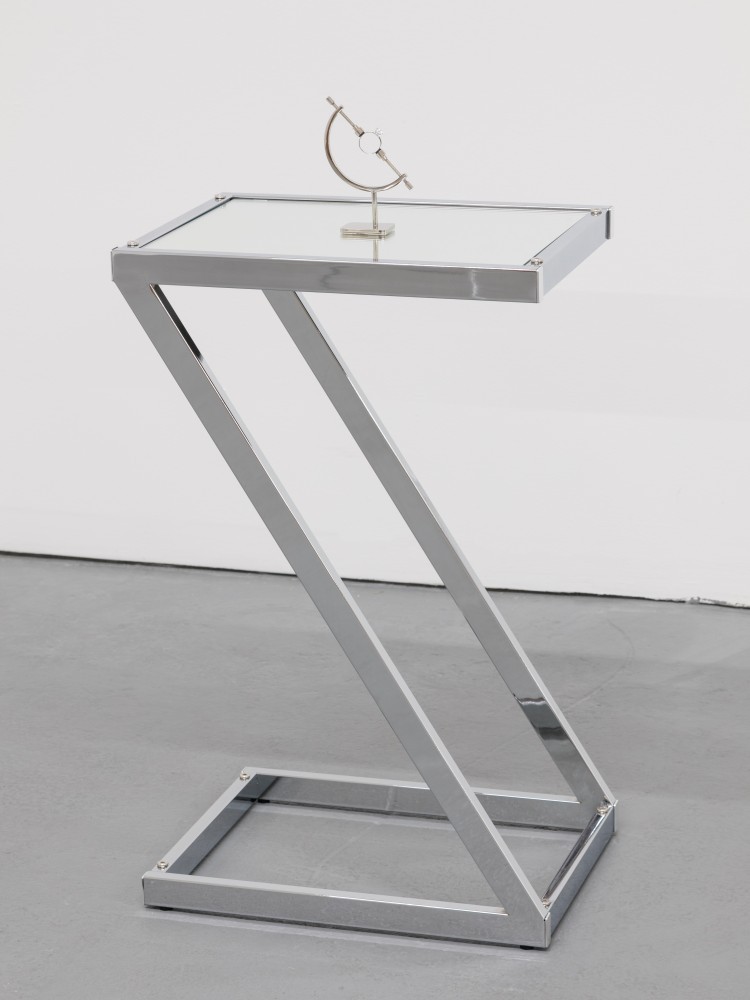 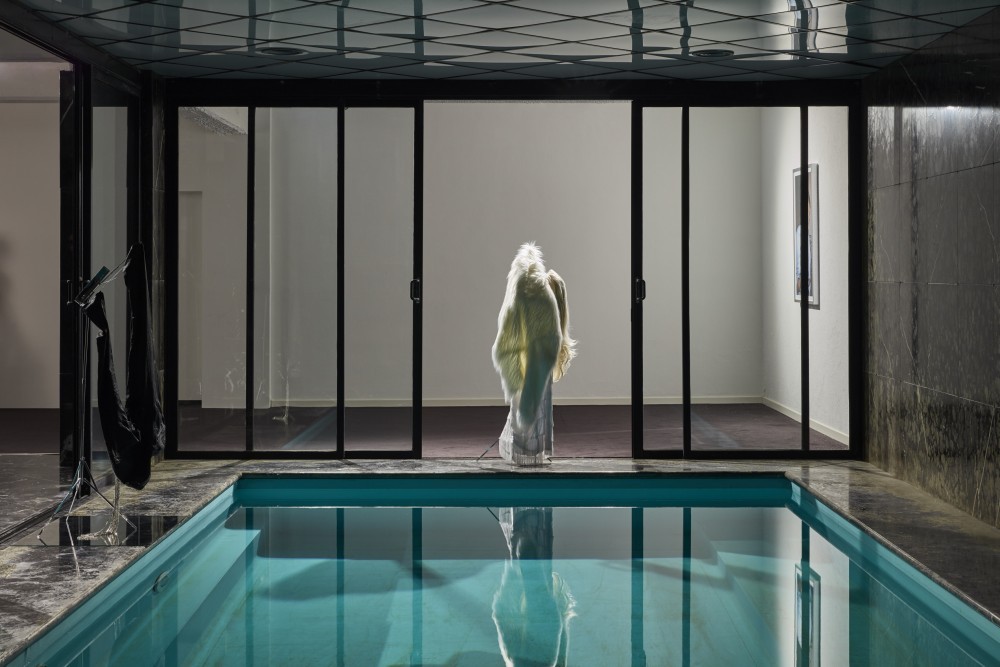 Installation view, of Kayode Ojo’s You dressed him like me? at Giardino Segreto, Milan, 2019. Photography by Agostino Osio. 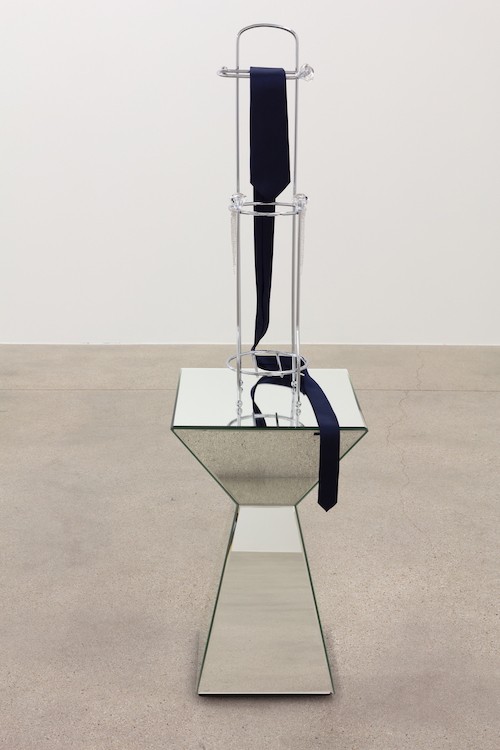 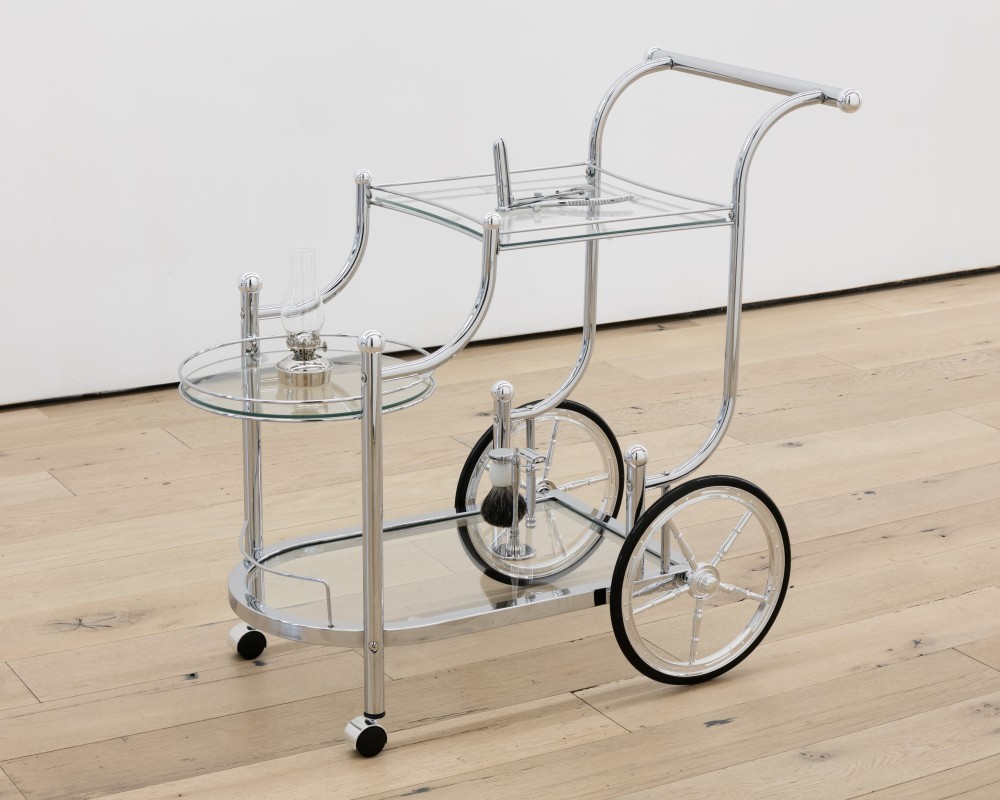 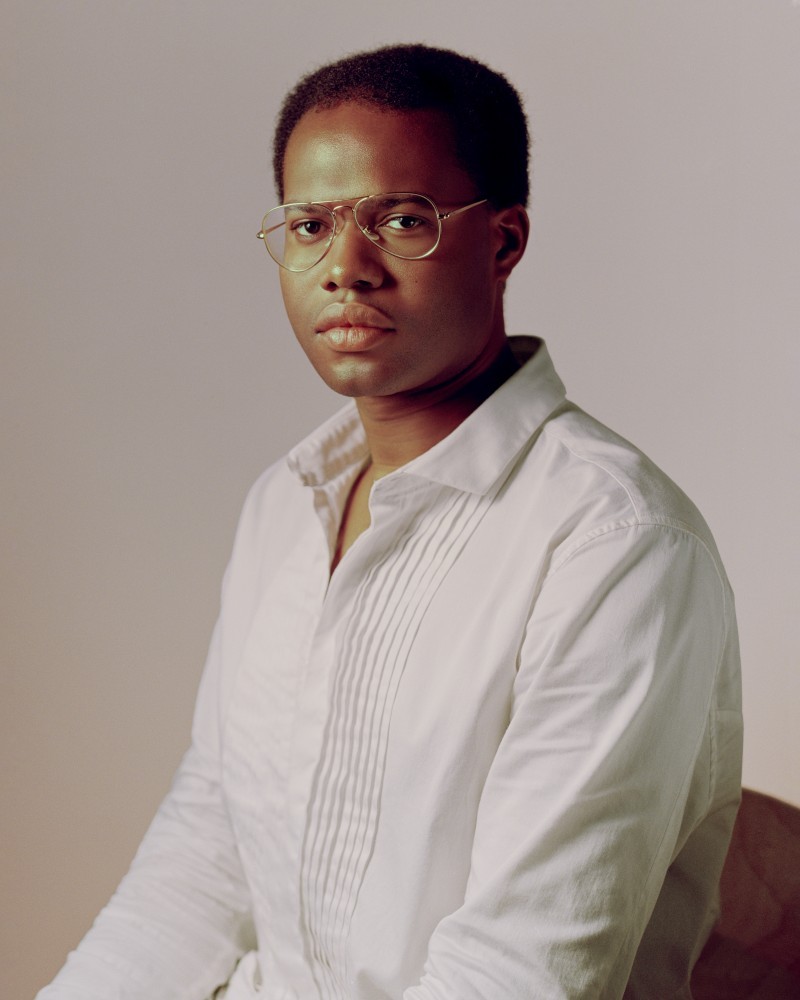 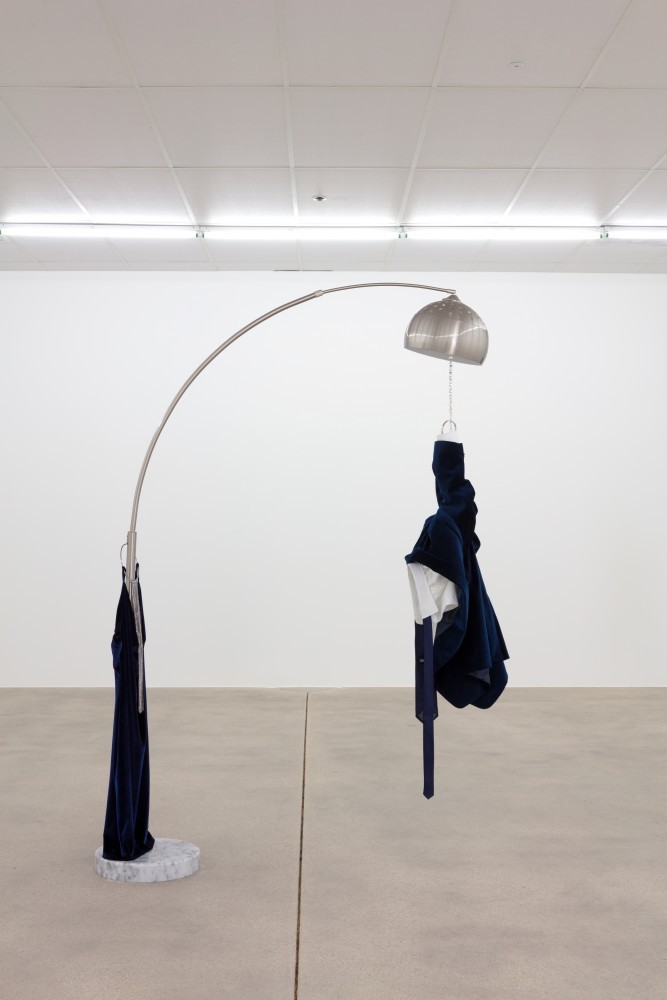 Kayode Ojo, Running on Empty (2018) at AND NOW, Dallas. Courtesy the artist and Martos Gallery.

Artist Kayode Ojo’s sculptural installations transform aspirational clothing and furniture into uncanny scenes. Wigs pour from champagne bottles. Pants hang upside down from a music stand, the crotch spilling glittering jewelry onto a mirror on the floor. Shiny surfaces are used to distract attention from the fact that these precariously assembled objects are all fakes — fast fashion and design knockoffs made to look glam. This past April, Manhattan-based Ojo mounted a solo show in Milan during Design Week, which came right on the heels of exhibitions in Dallas, Paris, Berlin, and New York. In the wake of this breakout run, PIN–UP paired the 29-year-old with one of his fans, architect and designer Rafael de Cárdenas, to discuss luxury, success, discomfort, and object-driven storytelling.

Rafael de Cárdenas: I’m just going to be honest. I didn’t prepare questions. Time is valuable.
Kayode Ojo: Are you negging me? I actually thought maybe I should prepare. I called a bookstore trying to get your book. I thought, should I look at this thing before I speak to this person?

No, I’m asking you questions! And I feel like we know something about one another already. I mean, you came to my birthday.
But this is the first time we’ve hung out in New York isn’t it? I only see you in Paris, which sounds so bougie but it’s true.

Are you wearing a Cartier Love bracelet?
Yes. I’ve used these in my work before. But this one’s fake. I really like the narrative of the bracelet. The idea is that you go to the store, your partner buys it for you, and they screw you into it. Liz Taylor and Richard Burton did it. All my sculptures that include the bracelet were made after a conversation I had with someone who was married and clearly cheating on his wife — the guy was wearing one of these Love bracelets, and I thought it was so interesting because it’s like a shackle. The point is, you don’t take it off. But also the bracelet introduces this idea of real and fake. What’s happening between price and quality in fashion is really insane — I think sometimes it must actually be the fetish of spending money that makes people buy these things. I definitely think about knockoff culture. A lot of the clothing I use in my work is fast fashion or e-commerce. I like to complicate the hierarchy of real and fake. Take faux fur. Faux is better than real, because PETA won’t come after you. But then if it’s faux, it’s really bad for the environment. And if you go somewhere wearing fake fur, it’s like, “She’s cheap.” So it’s come all the way back round to people thinking real fur is better now — but recycled fur.

Do you feel successful? I’m curious.
Last year was really insane. I had solo shows in Dallas, Paris, Berlin, and then a show in New York that was reviewed very well. I was included in two different under-30 lists. It’s a lot to have found something that I don’t necessarily enjoy doing but that’s important to do, and to be able to do it and be recognized for it! But there’s something unresolved. If I knew why I was making everything, that would be a solved issue in my life. For me, it’s a search, though I’m not exactly sure for what.

There’s this review by Cathy Horyn of one of Tom Ford’s first shows for Yves Saint Laurent after Gucci acquired it. I’m paraphrasing, but basically it’s about how Tom Ford can never be as good a designer as Yves Saint Laurent because he’s confident, handsome, and everybody loves him. She says Tom Ford can never sift through the minutiae because he doesn’t have to.
There are two types of artists. There are people who just love working, love what they’re doing, and want to share it with everybody. And then there are people who are extract-ing things out of themselves in order to exhibit them. There’s a little bit of satisfaction, but it’s not always so comfortable for them. I think that my pleasure is a very small moment, and it really is only the last day of install. The rest of the process doesn’t feel great. If I was someone who was very wealthy and never had to work and was able to spend six months thinking about an exhibition and afterwards could go on vacation, maybe it would be different. But my work is made to tear itself apart. It’s not something that’s going to make anyone feel super confident about themselves.

Do you think the objects in your sculptures are beautiful?
It’s an 80s idea of what’s attractive. Now luxury is this minimalism type of thing.

You could make the argument that rich people have never been less aspirational. Growing up in the era of Dynasty, I’ve always been drawn to luxury with a capital L — a black-velvet evening gown with a diamond choker and long gloves, a big fucking staircase, chandeliers, private planes, marble!
There was a summer I went home to Tennessee and watched all these seasons of Dynasty on YouTube.

If you look carefully at the fight scenes, Linda Evans and Joan Collins are played by six-and-a-half-foot-tall guys wearing wigs and punching each other.
Wow! Throwing someone through a coffee table does seem like a lot for Joan Collins to handle. Sometimes I think about how if, at an opening, a kid or a dog or a drunk person knocked over my work and something broke, it’d be a shame, but it would still look pretty good destroyed.

I was very impressed by the house where you staged your Milan show (You dressed him like me?, curated by Gea Politi and Cristiano Seganfreddo).
I couldn’t believe it! When am I going to get the chance to do something like that again?

It felt like this forensic crime scene. The setting — a room three stories underground with a marble pool — gave a different meaning to the work than if it had been shown in a gallery.
Apparently that underground space was Giorgio Armani’s first atelier. I was like, “Holy shit!” And there is something really dark about it. One day, this guy was down there talking about how Milan is the center of murder and prostitution. I’m three floors underground and thinking, “Am I going to make it back up?”

I thought that space was so sinister and that’s why I’m bringing up this idea of the crime scene.
Well the logic of my work is about evidence, a trace of something that’s happened. I put on everything at least once before I use it in a sculpture. It’s this idea of the history that I have with an object, and a crime scene is about objects having a history. But then, what’s the history of a knockoff from Zara or Nasty Gal?

Portraits by Sangwoo Suh for PIN–UP.