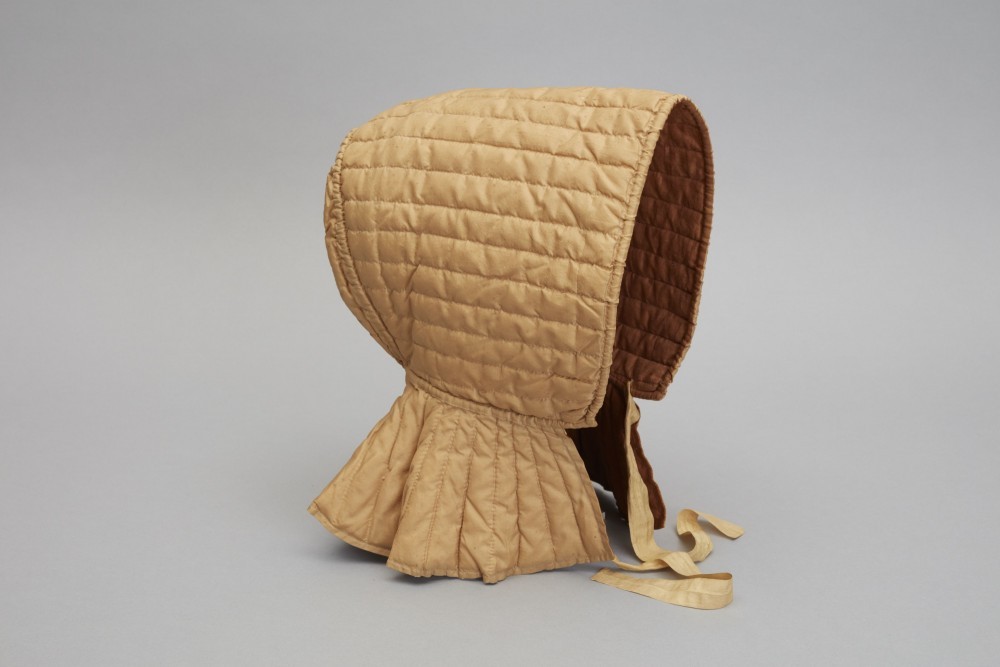 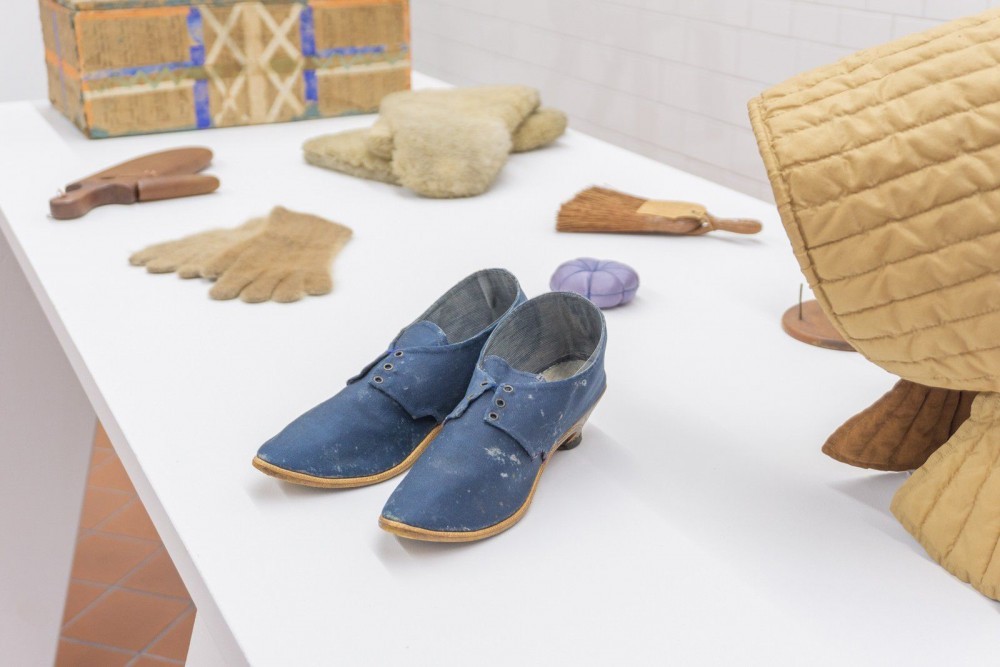 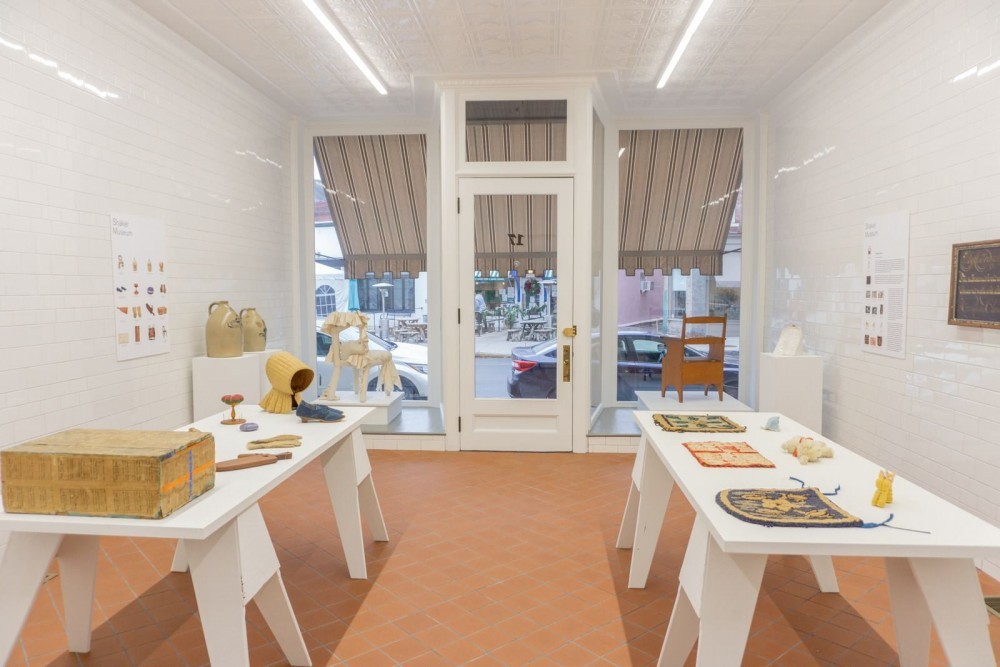 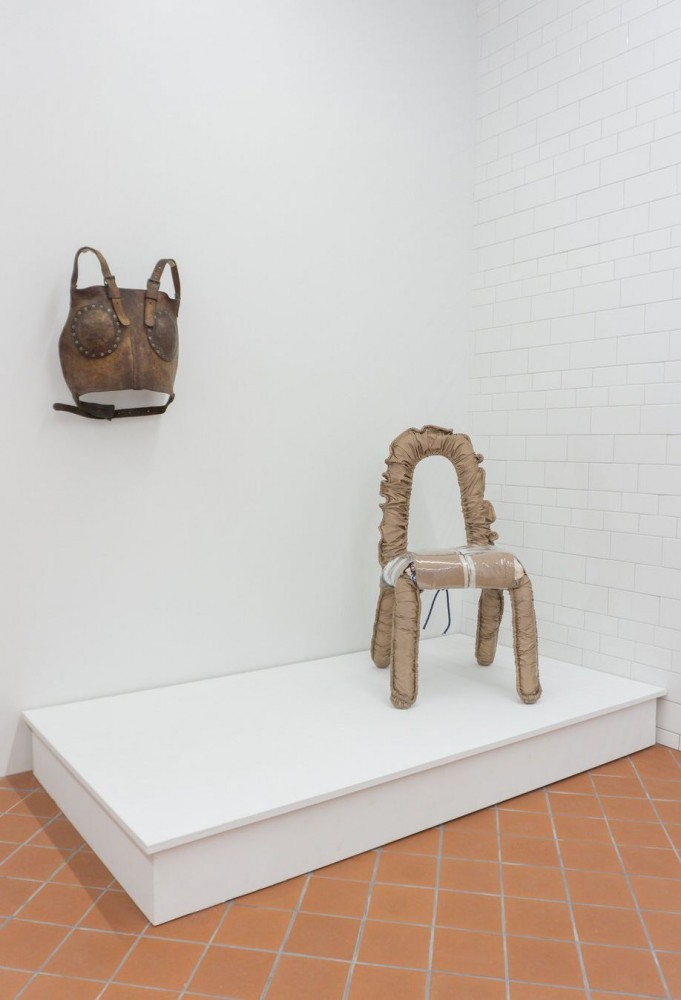 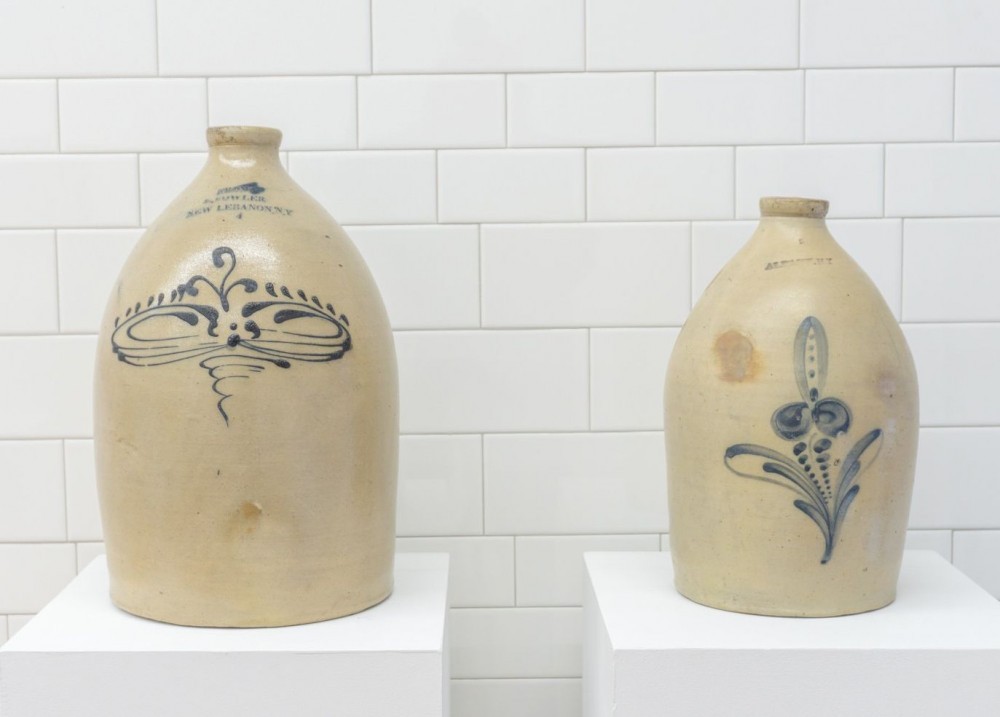 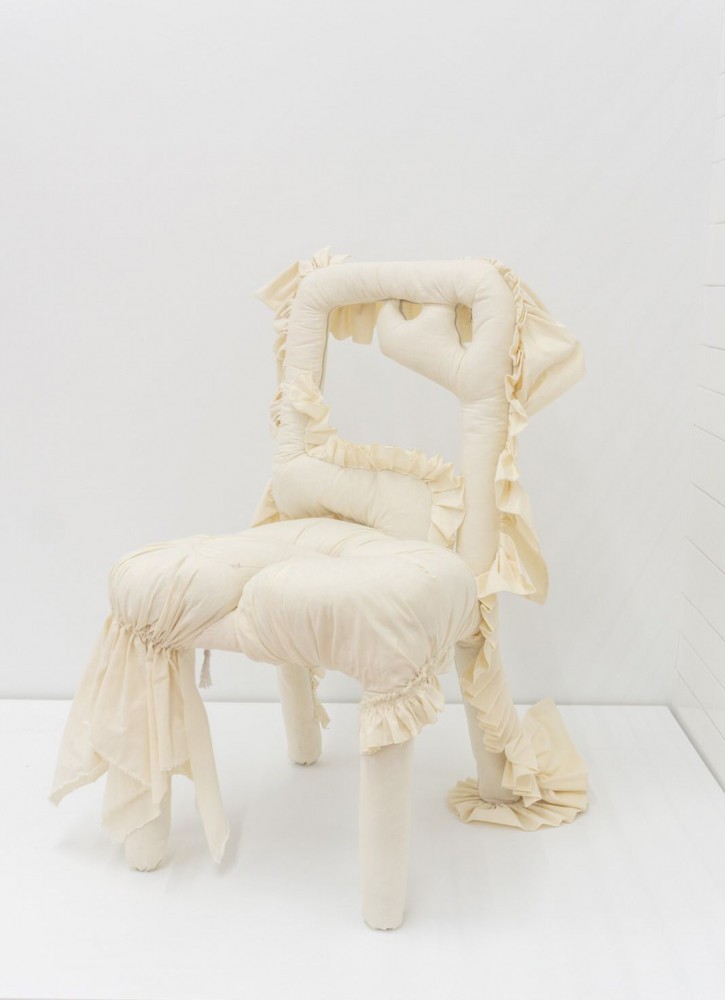 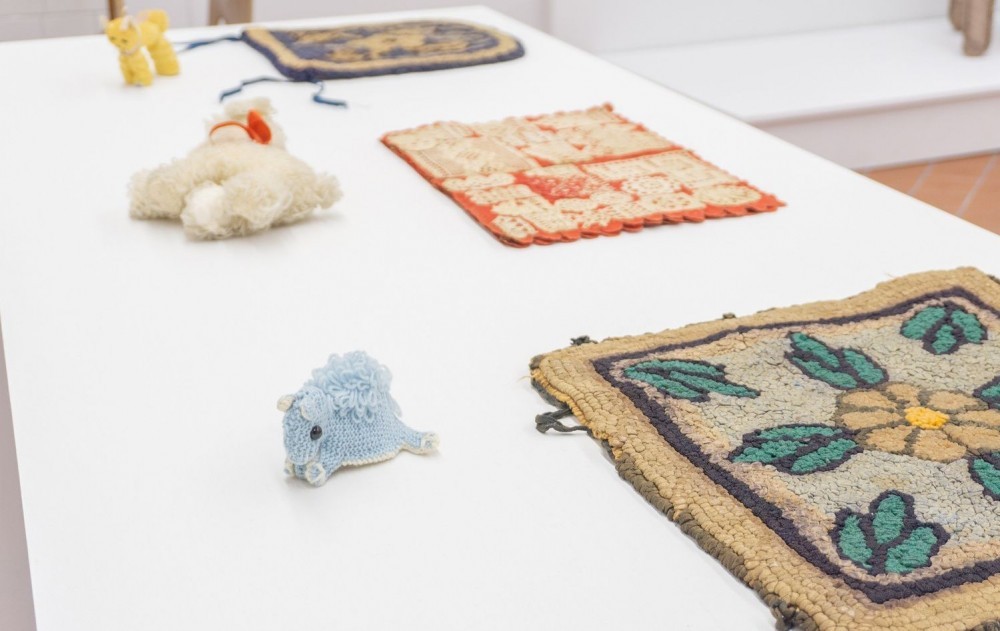 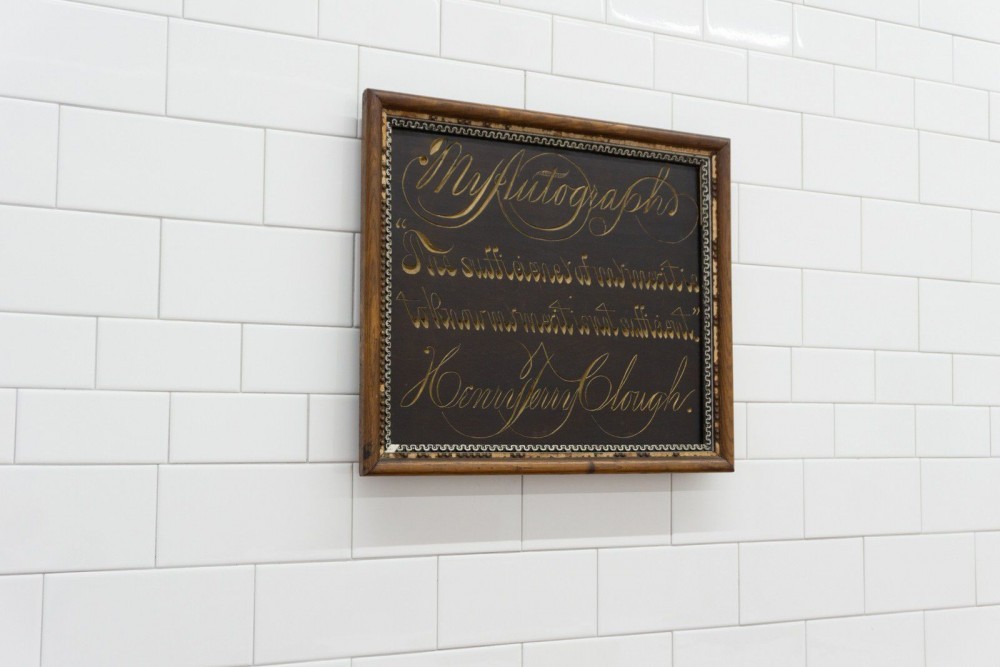 Installation view of panel with carved signature of Henry Terry Clough who, along with his siblings, was indentured by his parents to the Shakers in 1864. 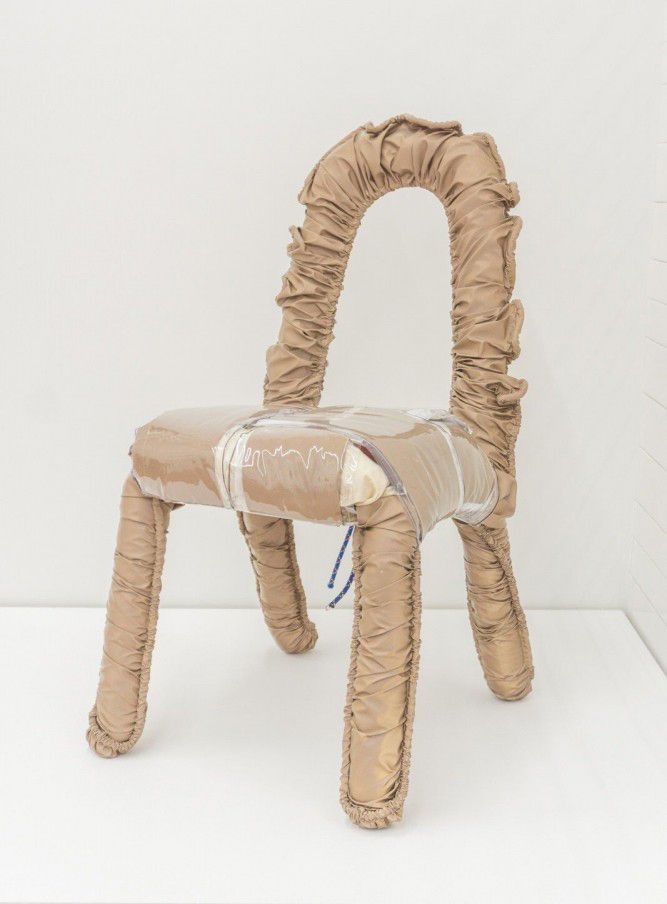 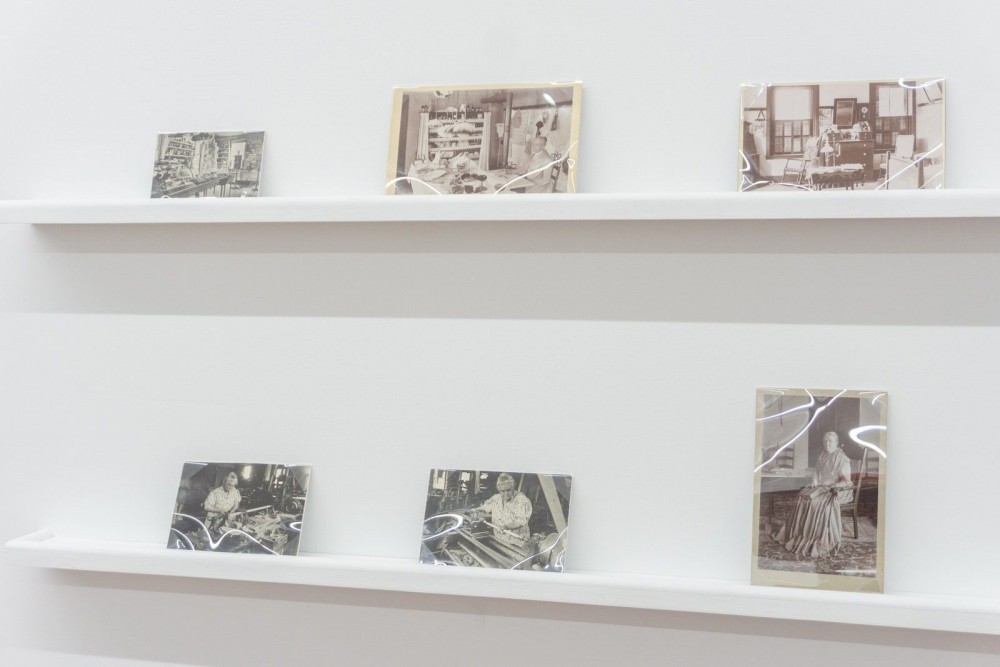 Archival images of Shaker women in 19th-century workshops and showrooms, included in Fringe Selects curated by Katie Stout at the Shaker Museum.

Irreverent young design star Katie Stout has pulled yet another unexpected rabbit out of her proverbial hat. She has curated a show, not of contemporary design, but of Shaker craft, in partnership with the Shaker Museum, at their temporary exhibition space in downtown Chatham, New York. Fringe Selects is an intimate and sweet exhibition, showcasing odds, ends, and objects from the Shaker Museum’s collection — in addition to two original works by Stout. On display are just under 30 items, including archival images of Shaker women in the workshops and showrooms that they spearheaded in the 19th century. The exhibition design, courtesy of Jeff Bailey, a board member of the museum, mimics these same spaces.

Shakers, those seemingly austere religious aesthetes of early America, have come to be known for their seamless craftsmanship and detailed approach to design. The context around their production is even more interesting than the objects themselves. “The Shakers came here two years before the American Revolution and they worked hard to be inclusive,” says Lacy Schutz, executive director of the Shaker Museum. “The first documented Black Shaker joined the Mount Lebanon community in 1796. All these things we tell ourselves about being Americans — we give equal opportunities and we are inclusive, for instance — the Shakers were actually doing.” Stout adds: “One of the reasons I was drawn to Shaker furniture was because of this yearning for something that is American to feel proud of.” At their peak in the 19th century, roughly 4,000 active Shakers existed in nearly 20 communities in the United States. Now there is only one active community in Maine. While they were a Christian sect, their belief system and way of life was run through with quirks and practices not seen in any other contemporaneous Western religious group.

“Shaker” was initially a derogatory term, derived from the nickname “Shaking Quakers,” in reference to their peculiar form of worship, in which all members joined in a platonic, communal, vibrating dance, lifting their spirits in joined ecstasy, calling to their God. In joyfully defiant fashion, the Shakers took this slur and reclaimed it. Similarly Stout has challenged convention throughout her practice, most notably by reframing ideas around female agency with her Lady Lamps series. The two pieces which Stout created for Fringe Selects in response to the time she spent in the Shaker Museum’s archives share this irreverent spirit.

“The bonnets and cloaks are the starting point,” says Stout of her creative process. The frame for Bonnet Chair 1 was purchased tongue-in-cheek from churchchair.com, then ruched and wrapped in taupe fabric, mimicking the “tight little butthole of fabric” Stout picked up from the hood of a Shaker cloak. The chair’s curved back and rounded legs feel cutesy and innocent, while its roughly finished vinyl seat reminds one of the overstuffed (and sometimes ripping) seats found in airports and on public transit. Right above this chair is a “Bull blinder” from a Shaker community in Canterbury, New Hampshire, carrying over the theme of restraint and bondage.

Bonnet Chair 2 has a slightly more asymmetrical charm, with random muslin ruffles protruding from its back, sides, and legs, metaphorically winking at the quilted tan Shaker bonnet just beyond it. Adding context to these pieces are impressive examples of Shaker “spirit writing” (created in a similar mode as the automatic writing of 20th-century surrealists) hanging from the tiled walls of the space, along with a white porcelain bed warmer (another butt joke), a sky blue potholder in the shape of a woodland creature and a washcloth (a favorite of Stout’s) tied into the shape of a poodle, much in the same style as hotel towel cranes. A lilac “tomato-style” pin cushion from the middle of the 20th century and a pair of blue hand-stitched shoes, reserved specifically for Shaker worship (dance) also make appearances.

All the items but one  in this show were made by women. The Shakers lived in complete celibacy, partially to give their female members an equal chance at production and self-realization. This radical approach to gender and equity exists in harmony with Stout’s own practice, as seen to beautiful effect in Fringe Selects.