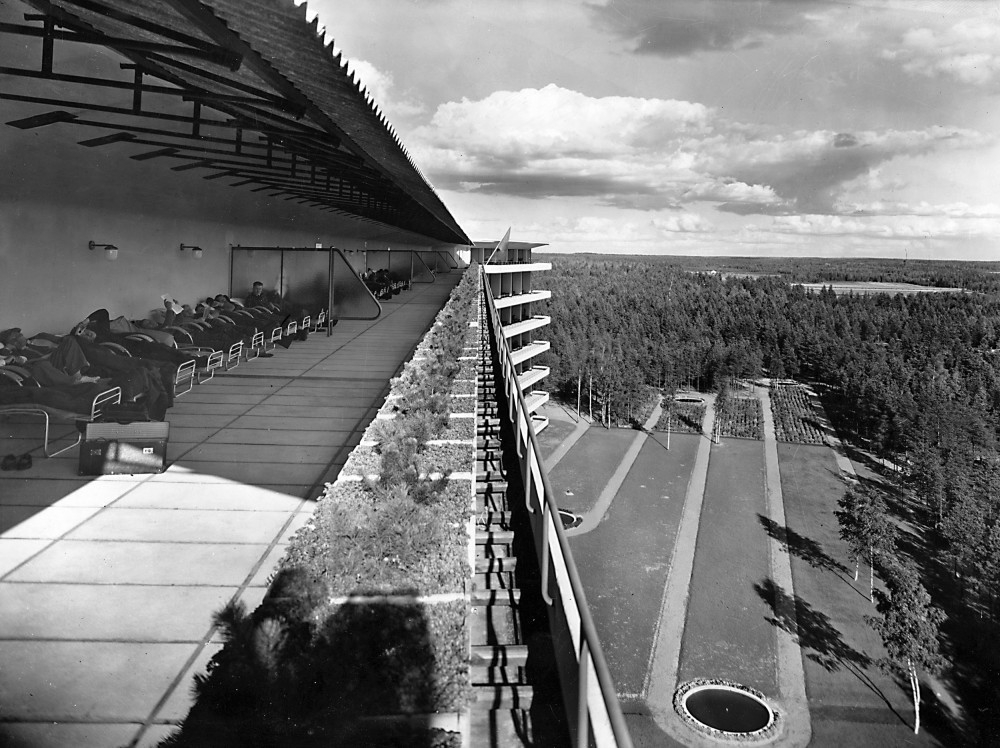 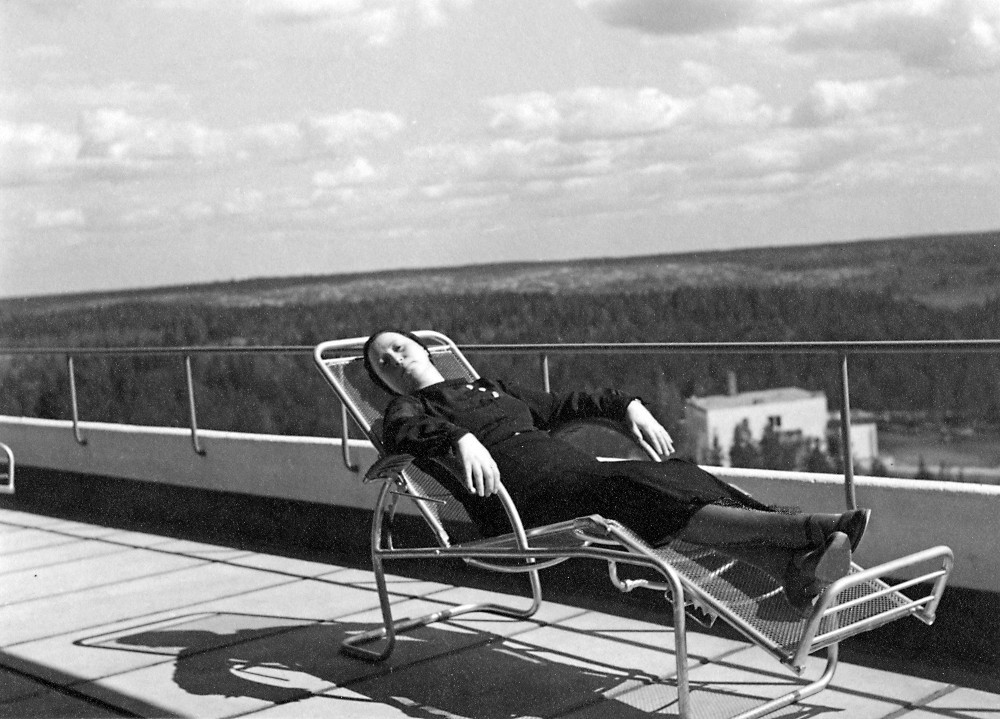 Designer Aino Aalto resting in a lounge chair on the solarium terrace. The photo was taken in the 1930s by her husband, Alvar Aalto. © Alvar Aalto Museum 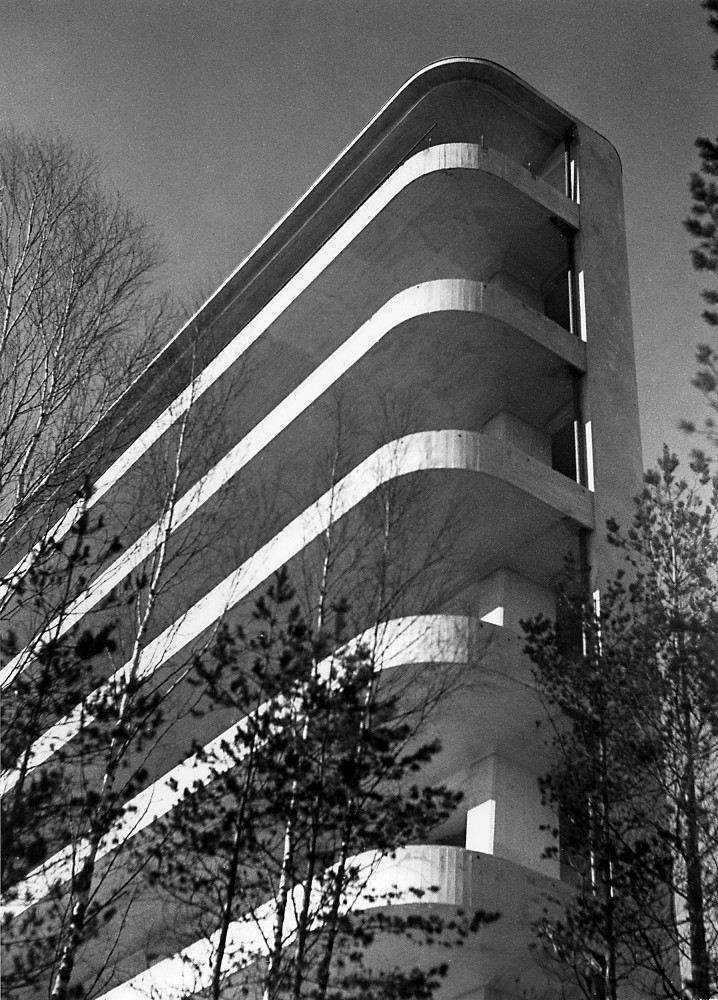 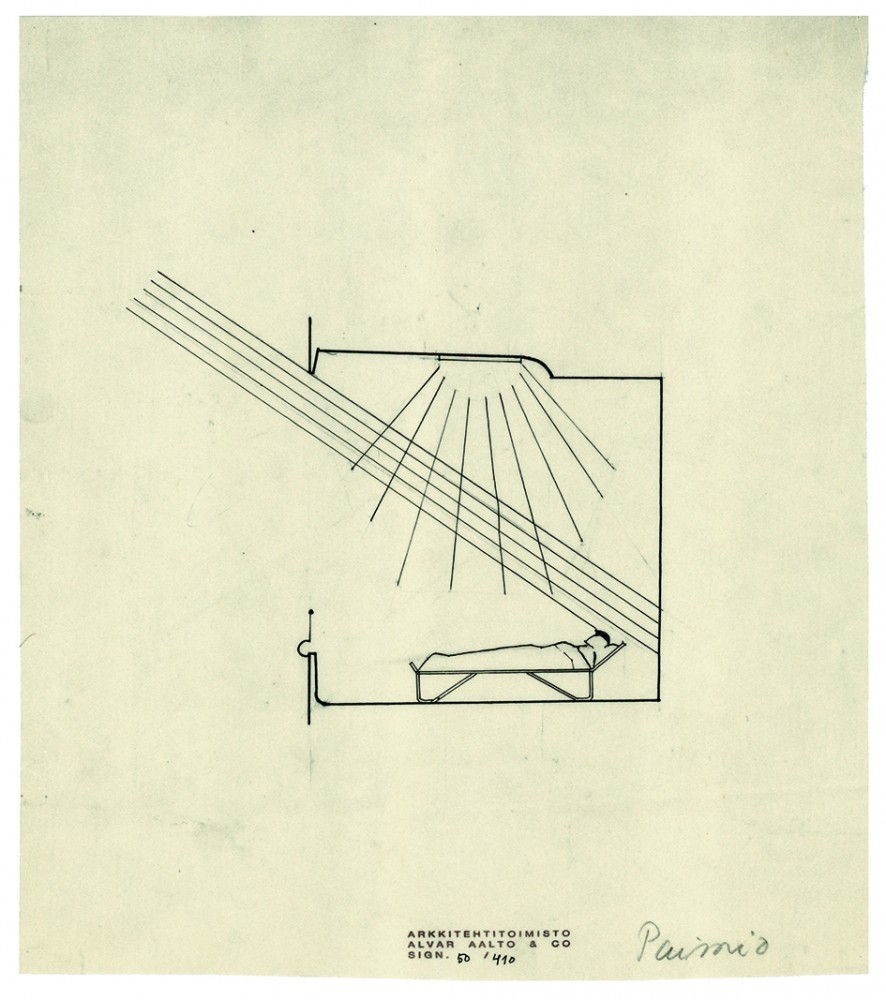 A 1930s diagram by Alvar Aalto of the sun rays and heating rays in a patient’s room. © Alvar Aalto Museum 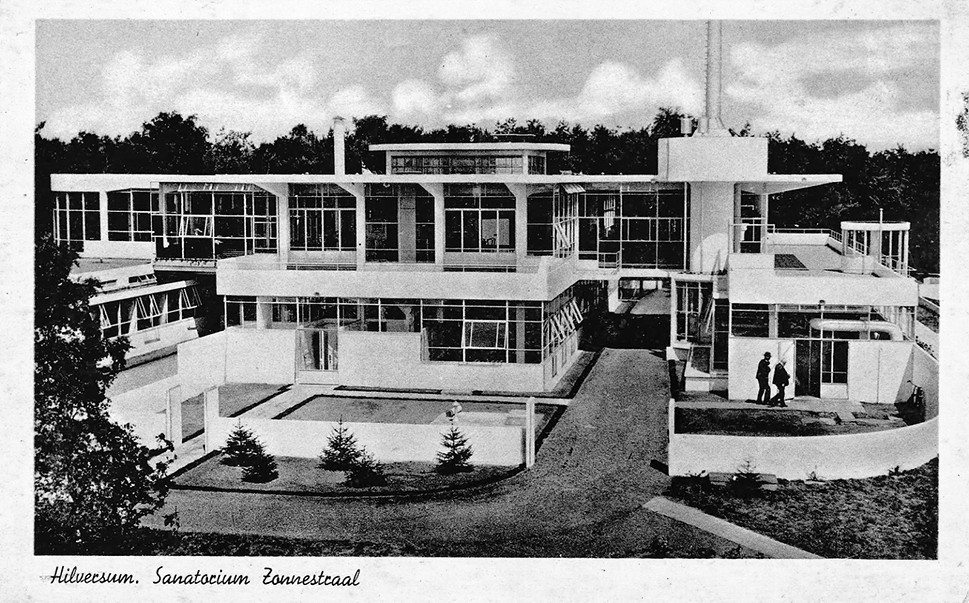 A 1927 postcard depicting the Zonnestraal sanatorium in Hilversum in the Netherlands. 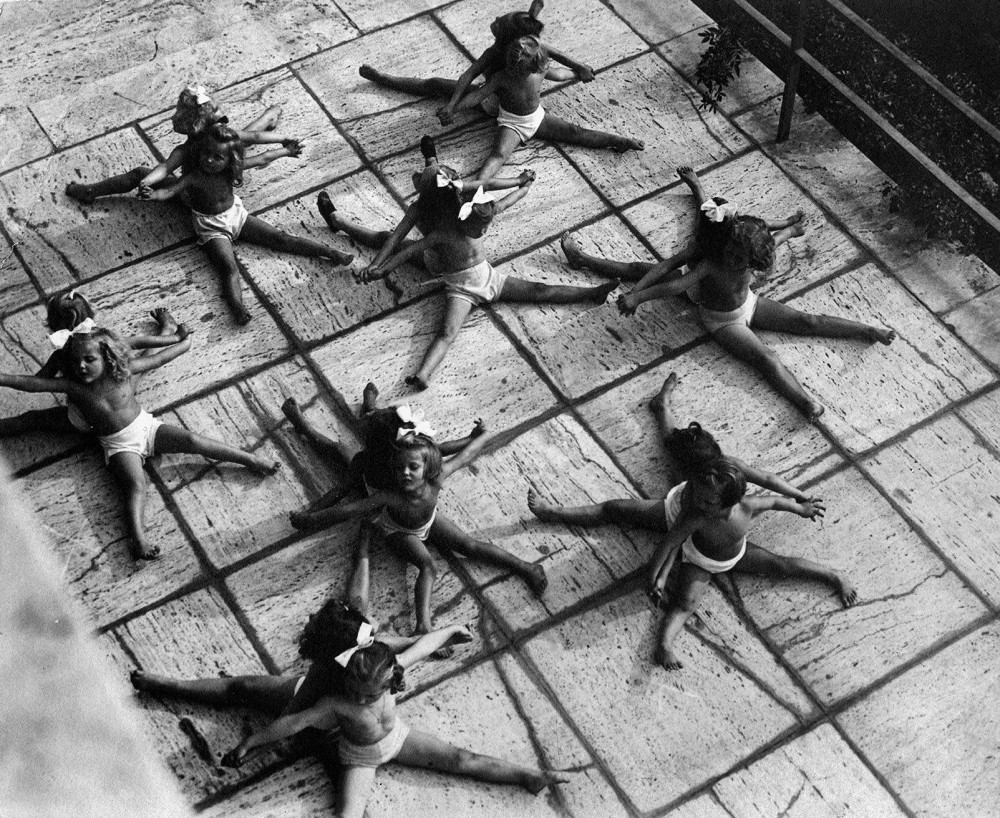 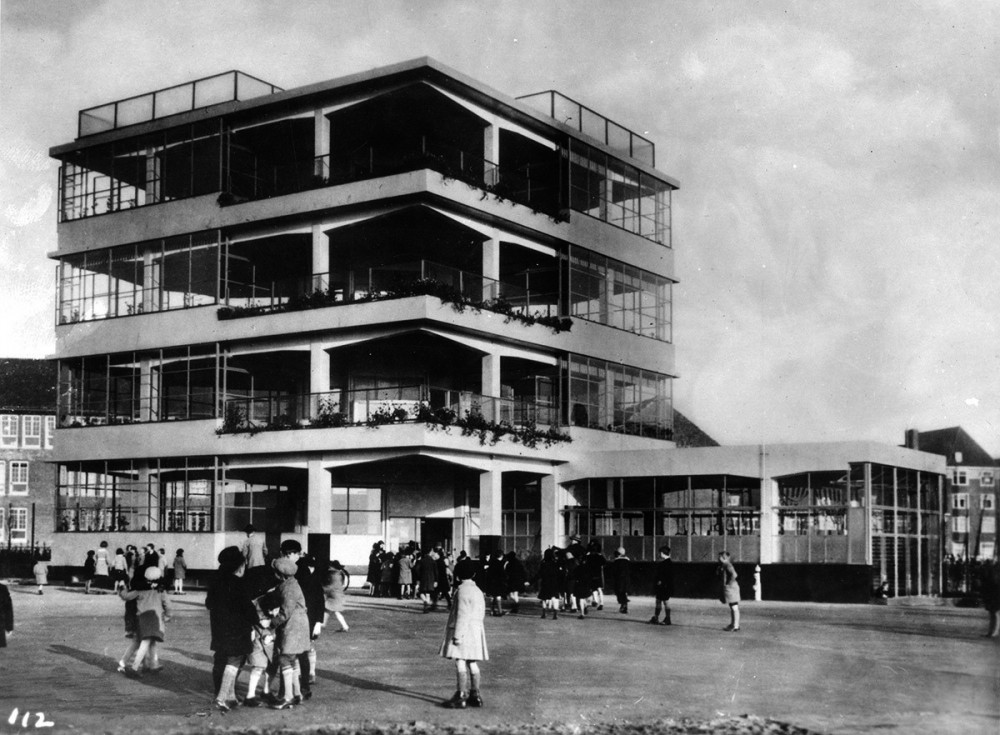 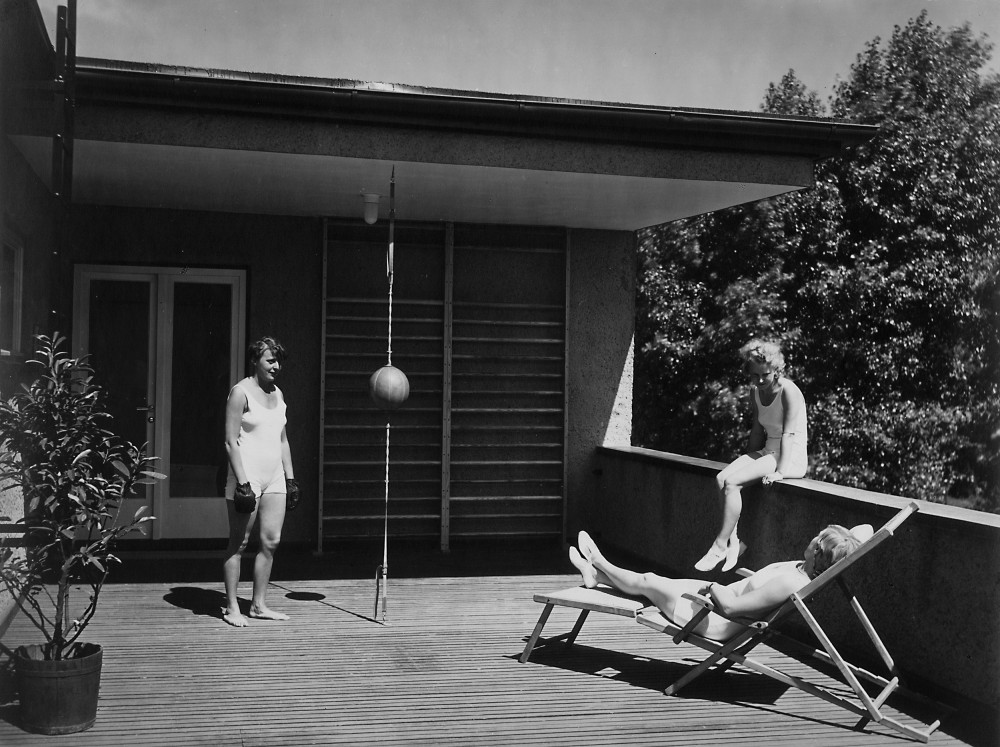 Theo Effenberger’s house in the Werkbund housing exhibition, in Wrocław, Poland, formerly known as the German city Breslau (c. 1929). © The Museum of Architecture in Wrocław 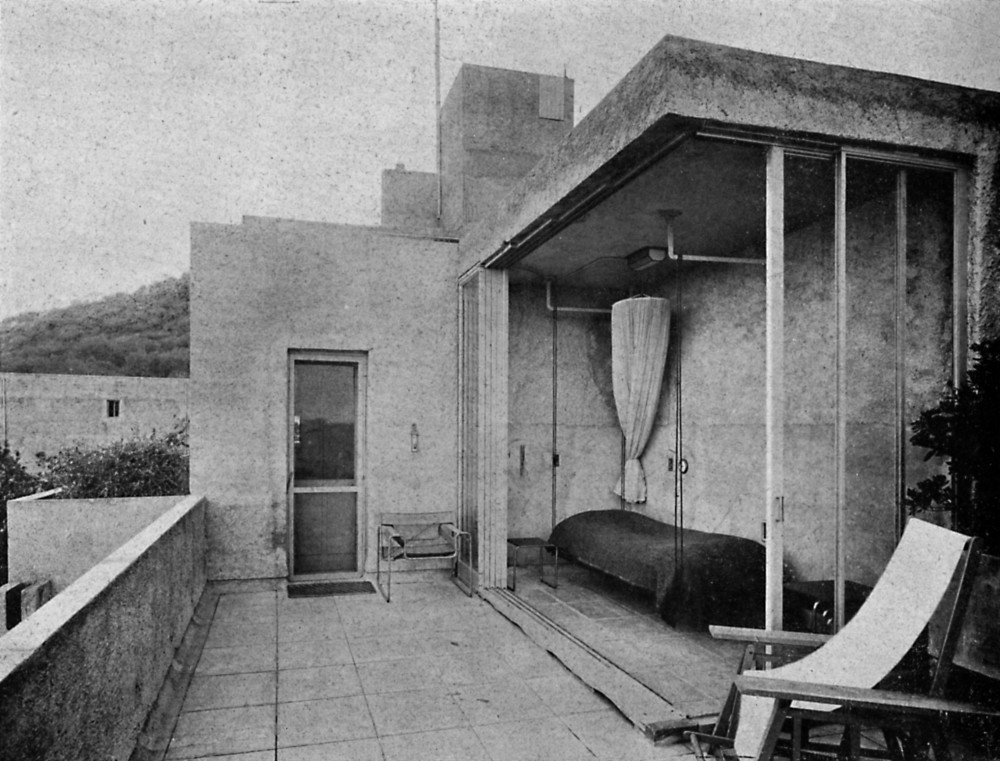 Open-air room on the roof terrace of the Villa Noailles in Hyeres, France, designed by Robert Mallet-Stevens (c. 1926). 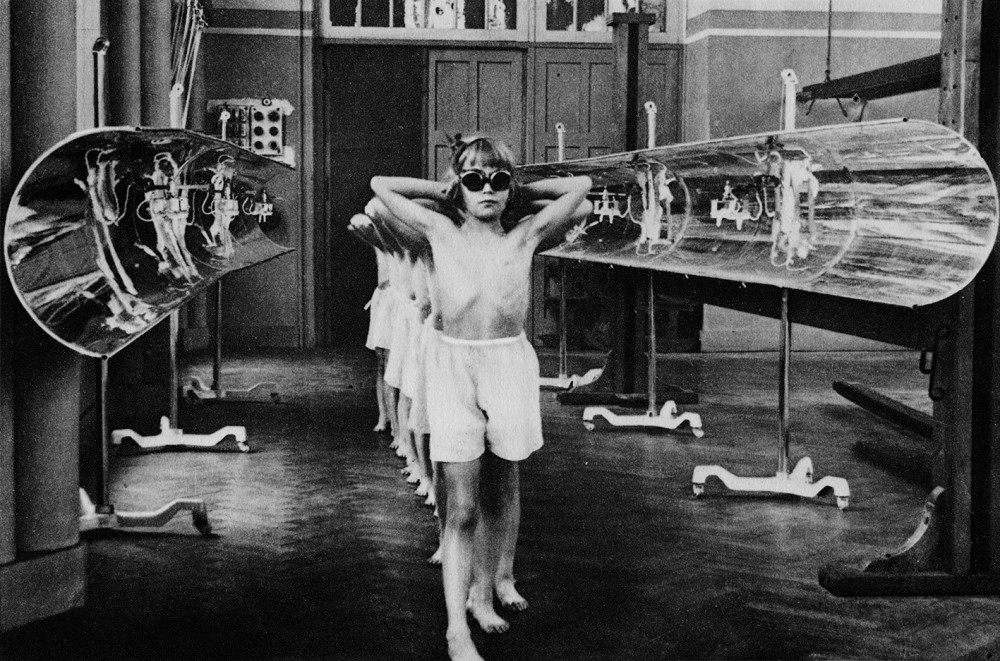 French children during a heliotherapy session, 1937. 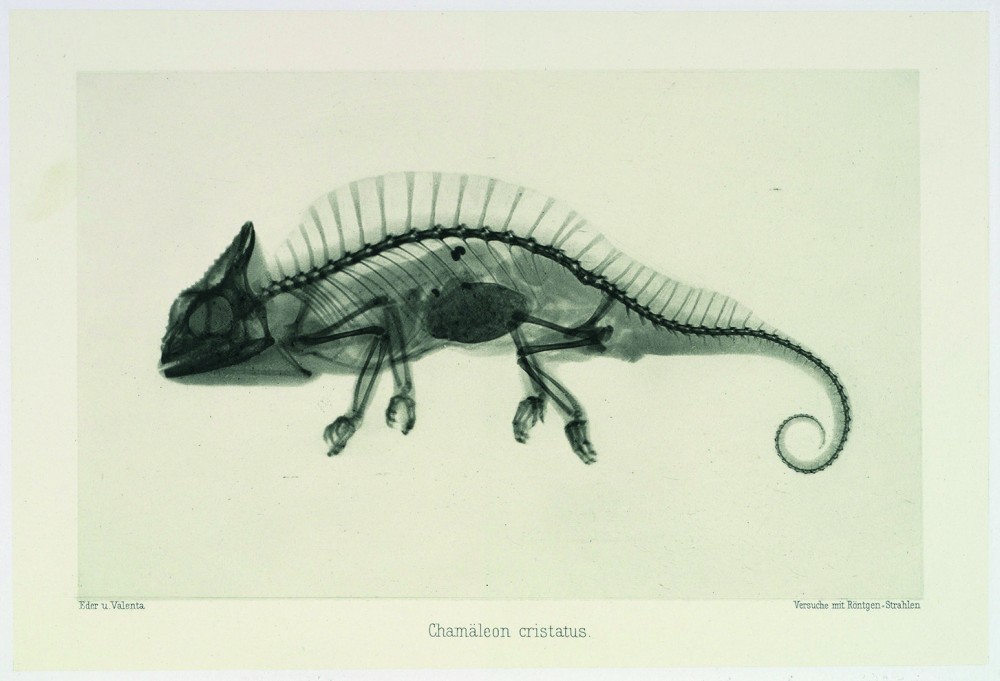 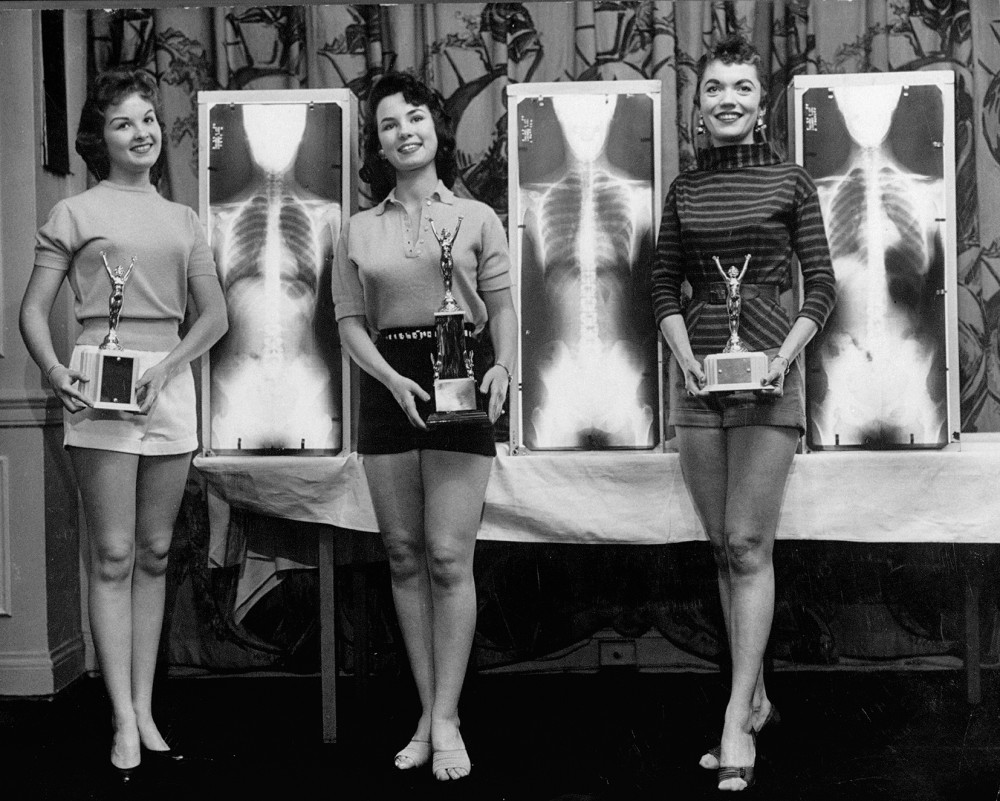 Winning models standing next to plates of their X-rays during a chiropractor beauty contest, May 1956. Photography by Wallace Kirkland for LIFE Magazine 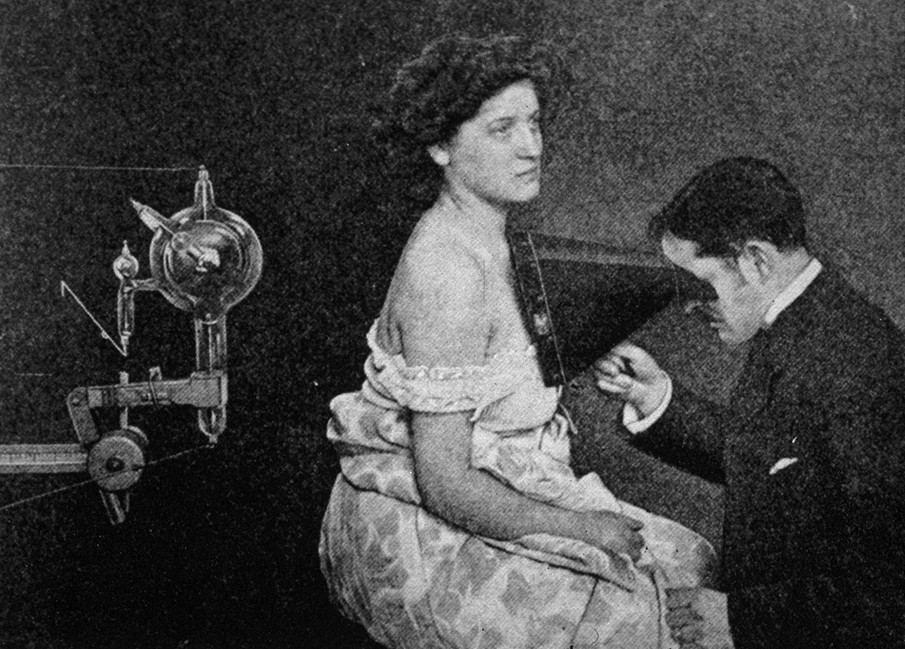 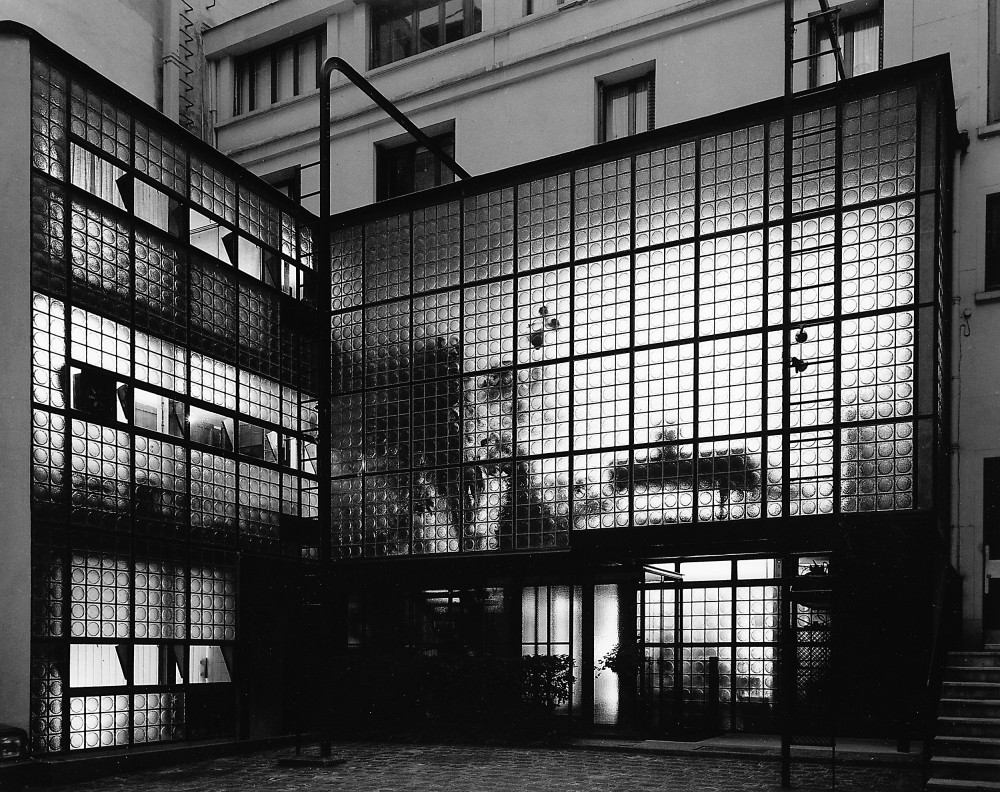 Façade of the Maison de Verre in Paris, designed in 1928–32 by Pierre Chareau (and Bernard Bijvoet) for Dr. Jean Dalsace. © Architectural Press Archive from the RIBA collection 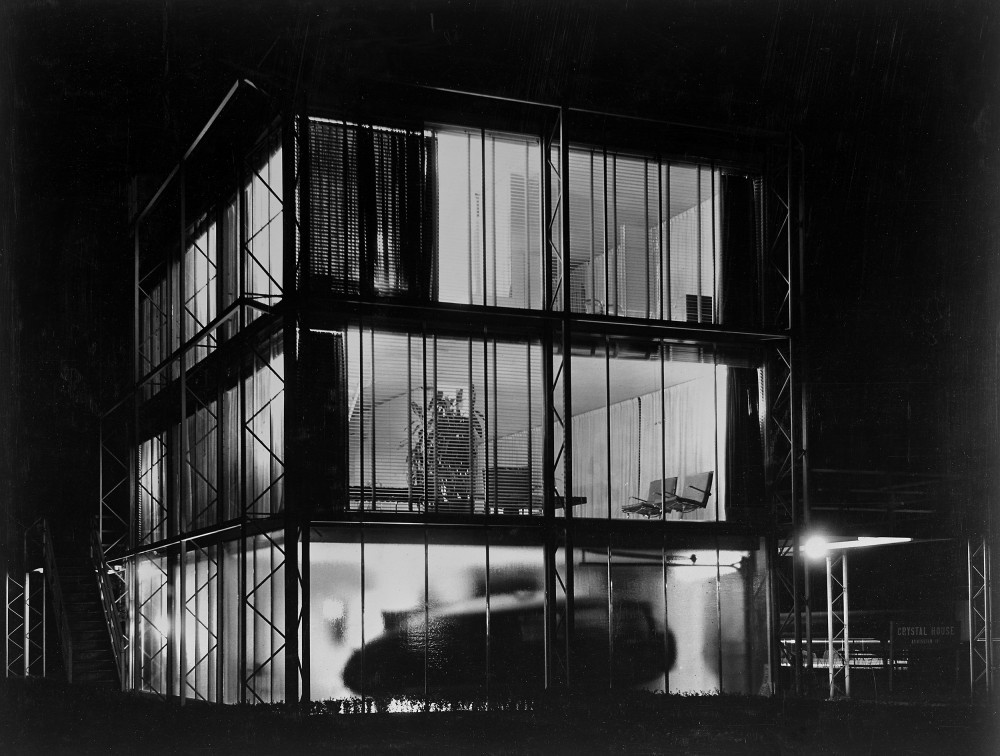 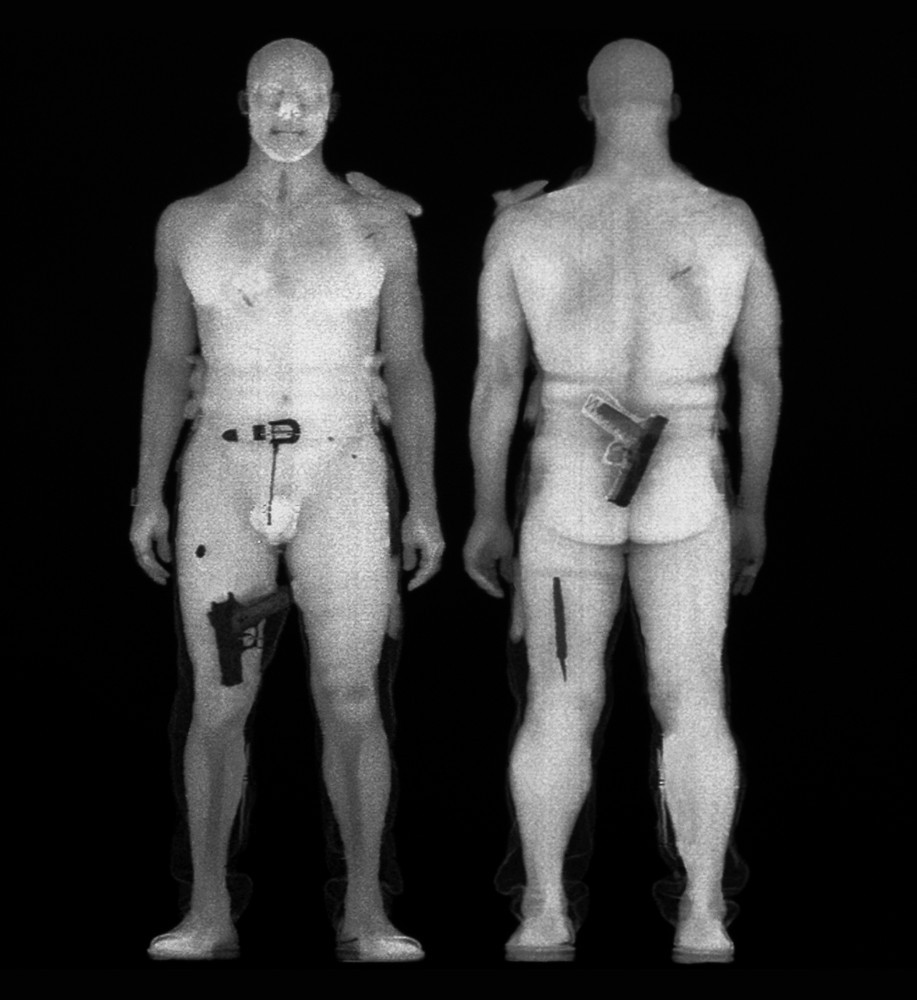 ARCHITECTURE AND ILLNESS: Beatriz Colomina On Tuberculosis, Modernism, and COVID-19

Beatriz Colomina was feeling under the weather when PIN–UP met her at her SoHo loft, which was ironic given that illness is exactly what we were there to discuss. Colomina, Howard Crosby Butler Professor of the History of Architecture at Princeton University, has made a career of shaking up the often stuffy world of architectural academia, challenging its establishment with her analyses of everything from sleeping and sex to war and toilets (see PIN–UP 23). Her most recent book, X-Ray Architecture (Lars Müller, 2019), contends that the interrelated phenomena of the tuberculosis pandemic and the discovery of the X-ray were the progenitors of European Modernism and its exports. With a minimum of six feet distance between us, Colomina recounted the glossed-over history of glassy architecture as a cure-all.

In X-Ray Architecture, you explain that you started researching the relationship between illness and Modern architecture in the 1980s. What sparked your interest in TB and its impact on Modernism?
I’m always attracted to the things people don’t talk about. Illness is such a question. Maybe people are afraid to talk about it. But in the early 20th century architects and critics talked a lot about tuberculosis. In fact, it was their real obsession. But, strangely enough, historians have ignored it, despite the fact that this obsession is everywhere, so obvious when you look and listen. It could be that this is what actually made a whole generation convinced that it was a good idea to move away from all those wall coverings, carpets, and draperies of the 19th-century interior in favor of clean lines and clean architecture. Illness is what modernized architecture, not just new materials and technologies. Why? Because one in seven people were dying from TB globally, but in a big metropolis, like Paris, it was more like one in three. Architects had a very good reason to want to clean up, not just aesthetically. That’s the central thesis of the book — Modern architecture has more to do with the campaign for health than with anything else. In fact, many of the ideas that Modern architects were proposing didn’t come from architectural theory, they came from doctors, nurses, and hospital architecture, particularly tuberculosis sanatoriums. At the turn of the century, in places like Davos, cutting-edge young doctors, young architects, and young engineers were collaborating. This was the real avant-garde. The first reinforced-concrete building in Switzerland was a tuberculosis sanatorium. The sanatorium was the laboratory of Modern architecture. Take the sun terraces for the cure, which enabled the 19th-century German Lebensreform idea of going outside into the health-giving sun to be brought right into the building. This is the interpenetration of inside and outside that became the trademark of Modern architecture, along with white walls, expansive glass, clean lines, absence of ornament, etc., which were all medical protocols long before Modern architecture came along.

It’s not only the tuberculosis pandemic, but also the discovery of its diagnostic tool, the X-ray, that you argue shaped Modern architecture.
I was fascinated that at the very same time the X-ray allowed you to see inside the body, architects wanted you to see inside their buildings, revealing the interior and even “bone structure.” Mies van der Rohe talked about skin-and-bones architecture and was fascinated by X-rays, even publishing them. The whole Mies aesthetic is an X-ray aesthetic. This desire for X-ray visibility had an enormous impact on architecture.

Early sanatoriums had terraces and were very focused on sun and open-air treatments — heliotherapy. How did these designs, originally intended for managing a deadly bacterial infection, become common in everyday architecture?
For most of the 19th century, hospitals were places where not just the poor but the absolutely destitute went. They were abject places, and this started to change precisely with all this modernization. At the turn of the century, wealthy people started to go to sanatoriums like the Purkersdorf in Vienna to treat their nerves, because everyone was so nervous around the metropolis. They became spaces of desire, where all kinds of diseases could be addressed within the atmosphere of a spa. My book traces how this space of desire was democratized and even became the model for everyday life.

You also focus on Dr. Philip Lovell, who was a celebrity health guru in Los Angeles in the 1920s and 30s, and who helped establish sanatorium-inspired European Modernism in California. It feels like we’re still living through this “health” experiment with the rise of LSD microdosing, intermittent fasting, and Goop.
Yes. Gwyneth Paltrow is the Dr. Lovell of today! Dr. Lovell was not a doctor at all. He never studied medicine, he was what they call a quack. I mean, he did a two-week chiropractic course, went to California, and became famous immediately, arguing that all health problems were related to diet. He advocated exercise, sleeping in the open air and bathing naked in the sun, and before you knew it all these wealthy people were going to see Dr. Lovell, including the editor of the Los Angeles Times. Dr. Lovell began writing a column in the L.A. Times, and became super famous. He enlisted Rudolph Schindler to do a house at Newport Beach and then Richard Neutra to do the so-called Health House in L.A. These houses were designed to prevent tuberculosis and foster an energetic lifestyle, and featured terraces outside each room for outdoors sleeping. It’s important to remember that it took forever to discover an effective treatment for tuberculosis, which is why for such a long time it was an illness that was treated with architecture. Then, in 1943, they finally found streptomycin, and by the 1950s all these sanatoriums started to close. And the very same architects who used to say, “My building is perfect for tuberculosis” pivoted to saying, “It’s perfect for your mental health.” Neutra is a very interesting case, because he himself had suffered from tuberculosis and spent a year in a sanatorium, and his brother died of it.

Were there any other Modernist architects whose work was tied to their own medical history?
Yes, many of them. Alvar Aalto, for example, was sick at the time of the commission for the Paimio Sanatorium in 1929, and he claimed that this helped him to understand the problem. He said that architecture is always conceived for the healthy person standing upright and that we should always design for the person in the weakest position. This was revelatory for me. Today, with our increasing awareness of the question of disability, ramps and other devices are added as an afterthought, but often the buildings don’t work for everybody. But what Aalto was saying is the road not taken in architecture: that if we always design for those in the weakest position, everybody else will be fine.

Is COVID-19 the tuberculosis of the 21st century? And if so, what effects will it have on architecture?
It’s more like the cholera epidemics of the 19th century that ravaged cities all over the world in wave after wave and led to enormous changes in urban infrastructure and design. The question for us is how the coronavirus will change architecture and the city. What I tried to show in the book is that architects were hugely involved in the design of health, actively collaborating with doctors and scientists. We have to wake up and do it again!