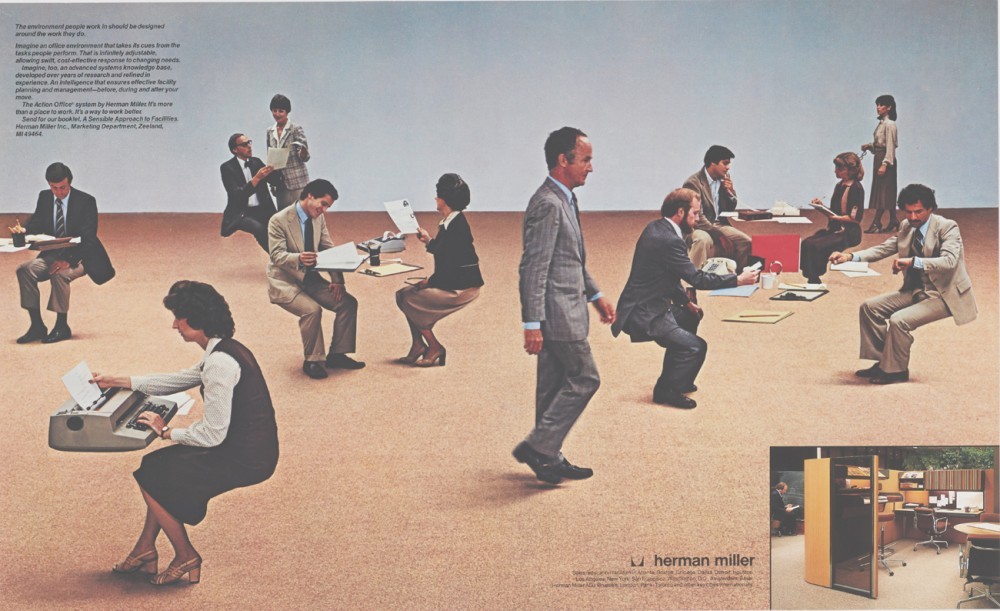 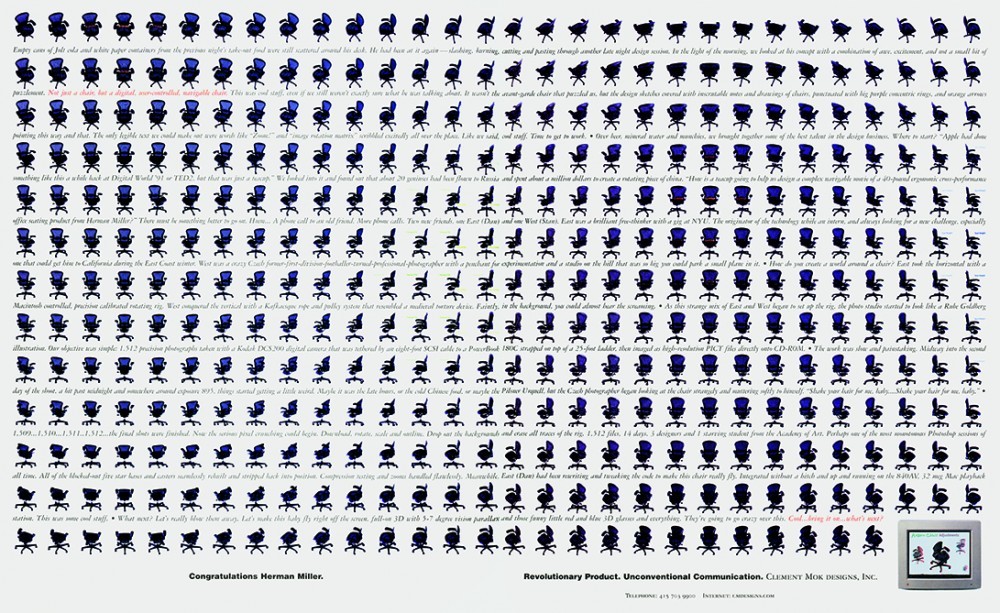 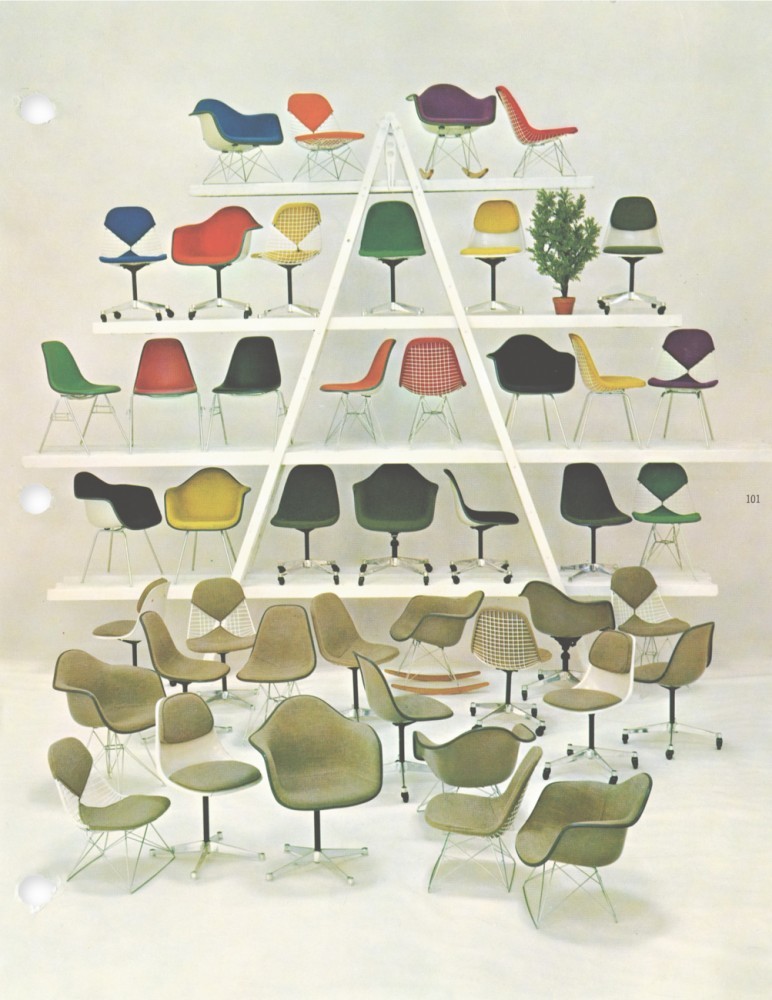 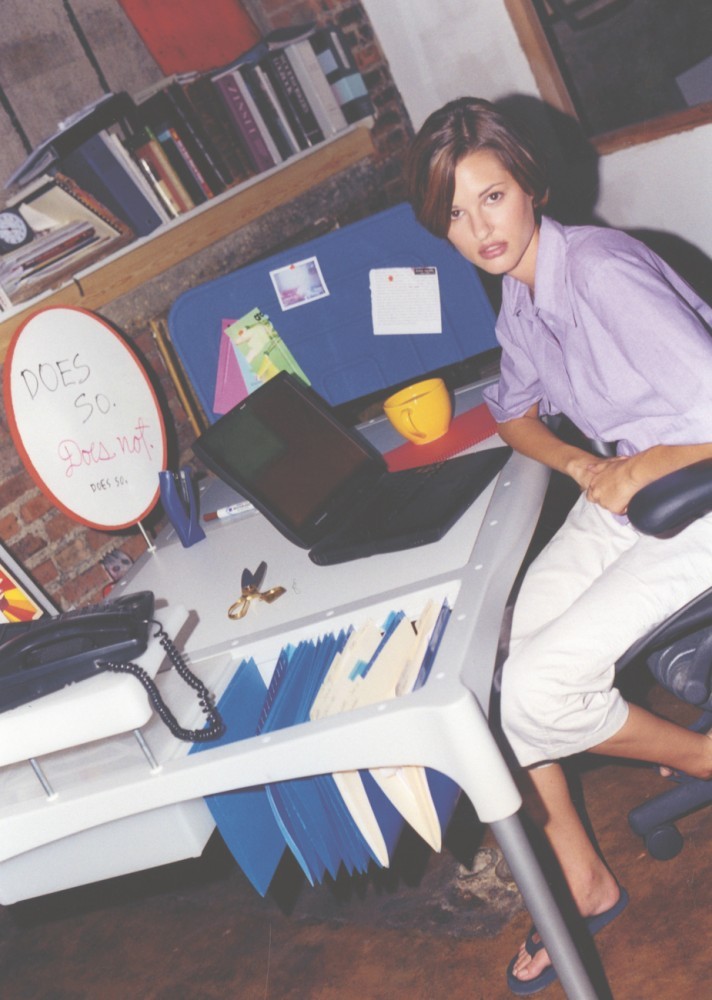 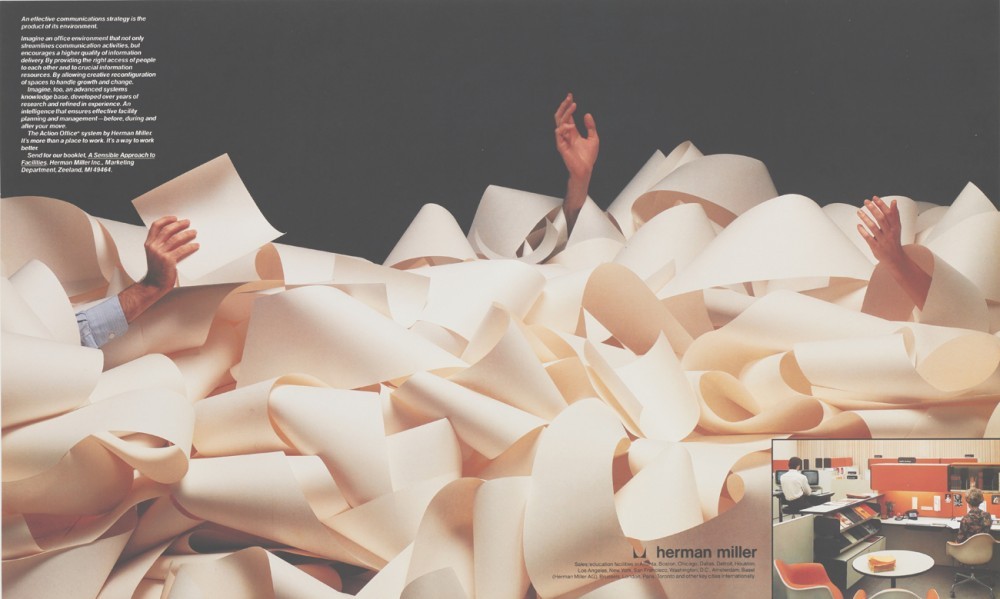 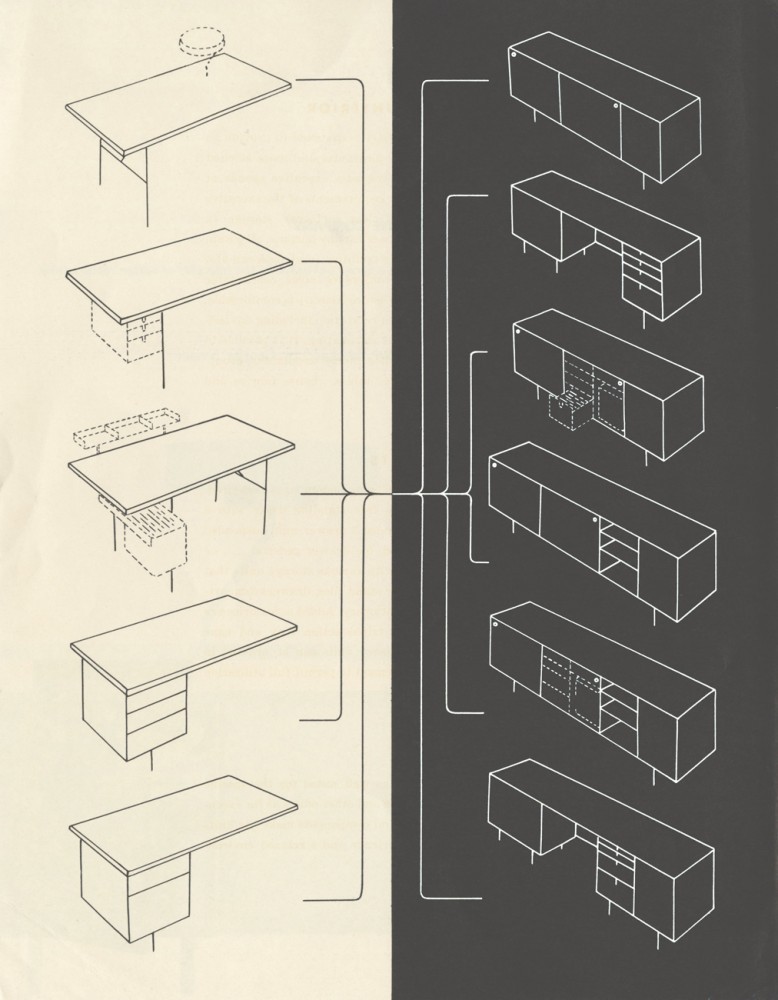 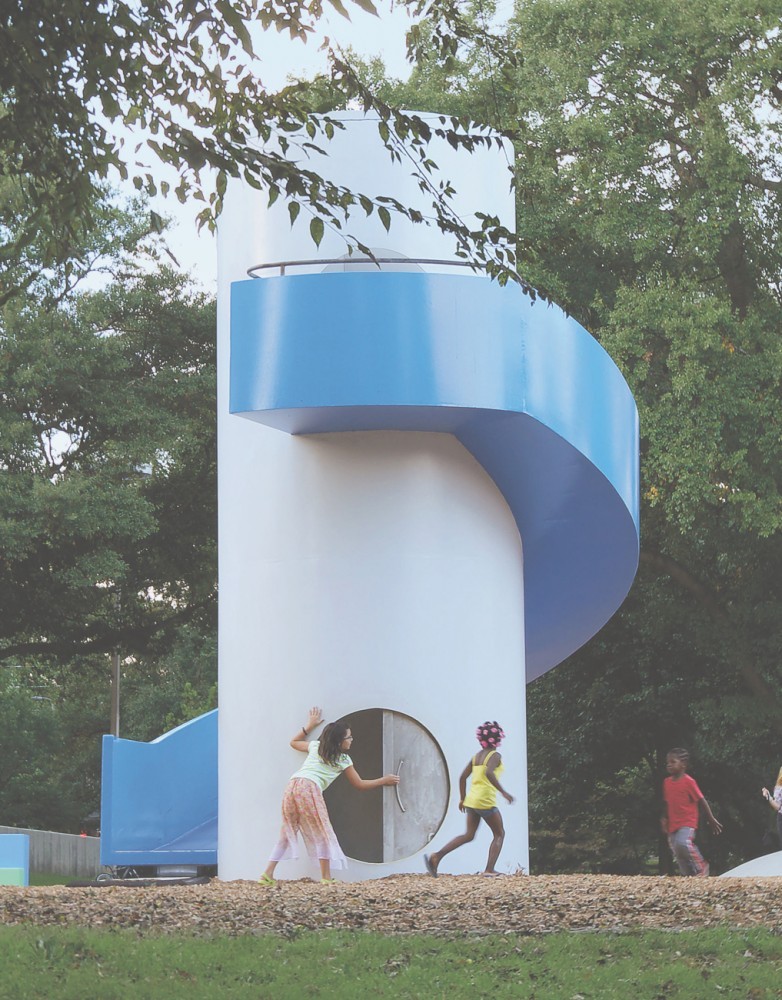 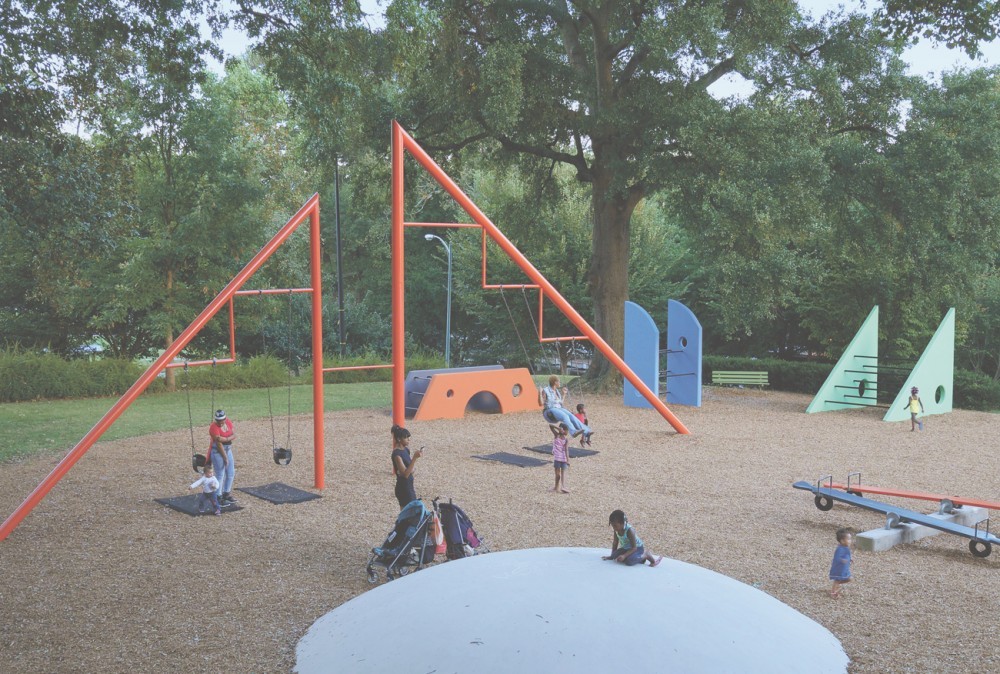 Noguchi Playscape designed by Isamu Noguchi in 1976 for Piedmont Park Atlanta, Georgia, restored with a grant from Herman Miller Cares, 2014. 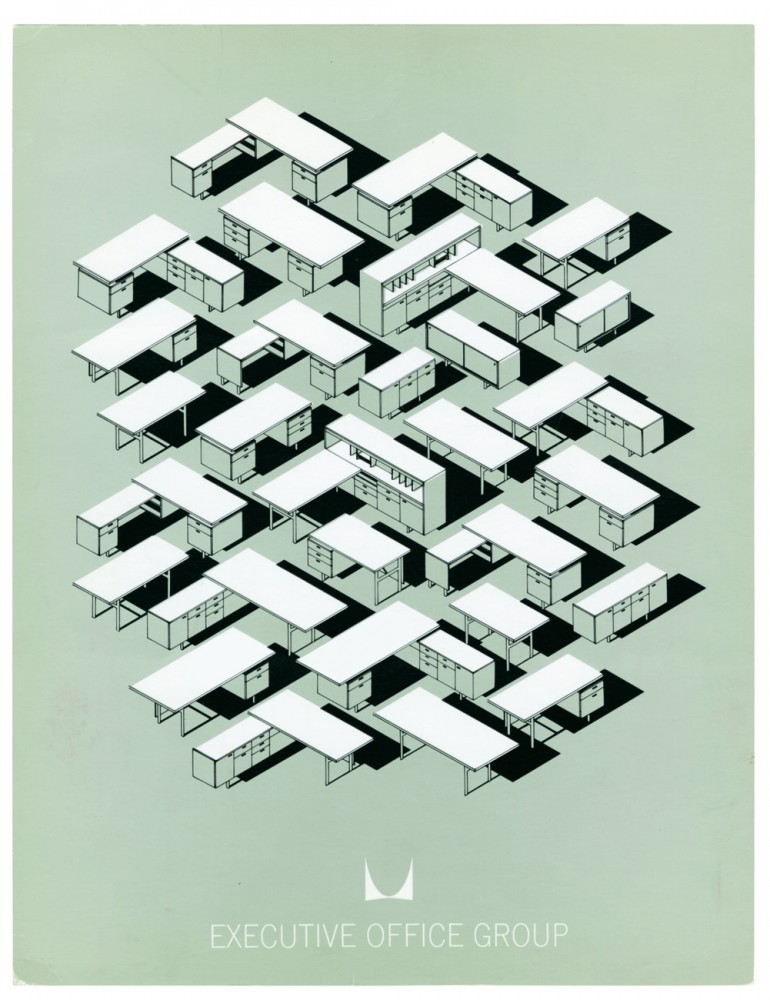 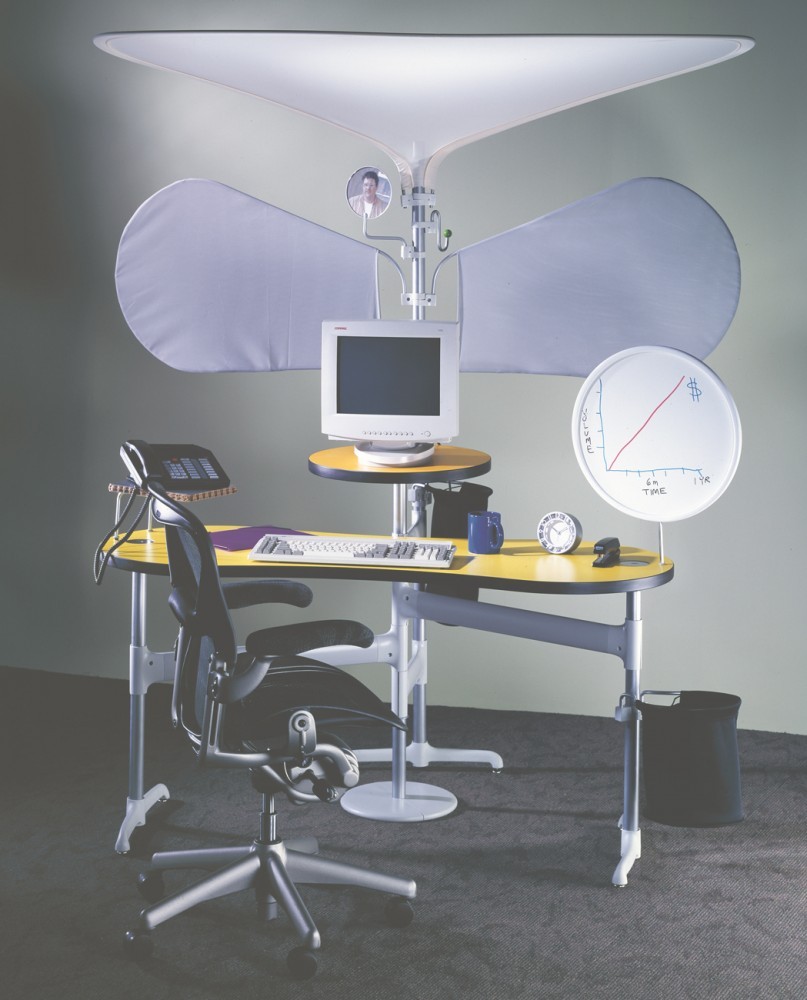 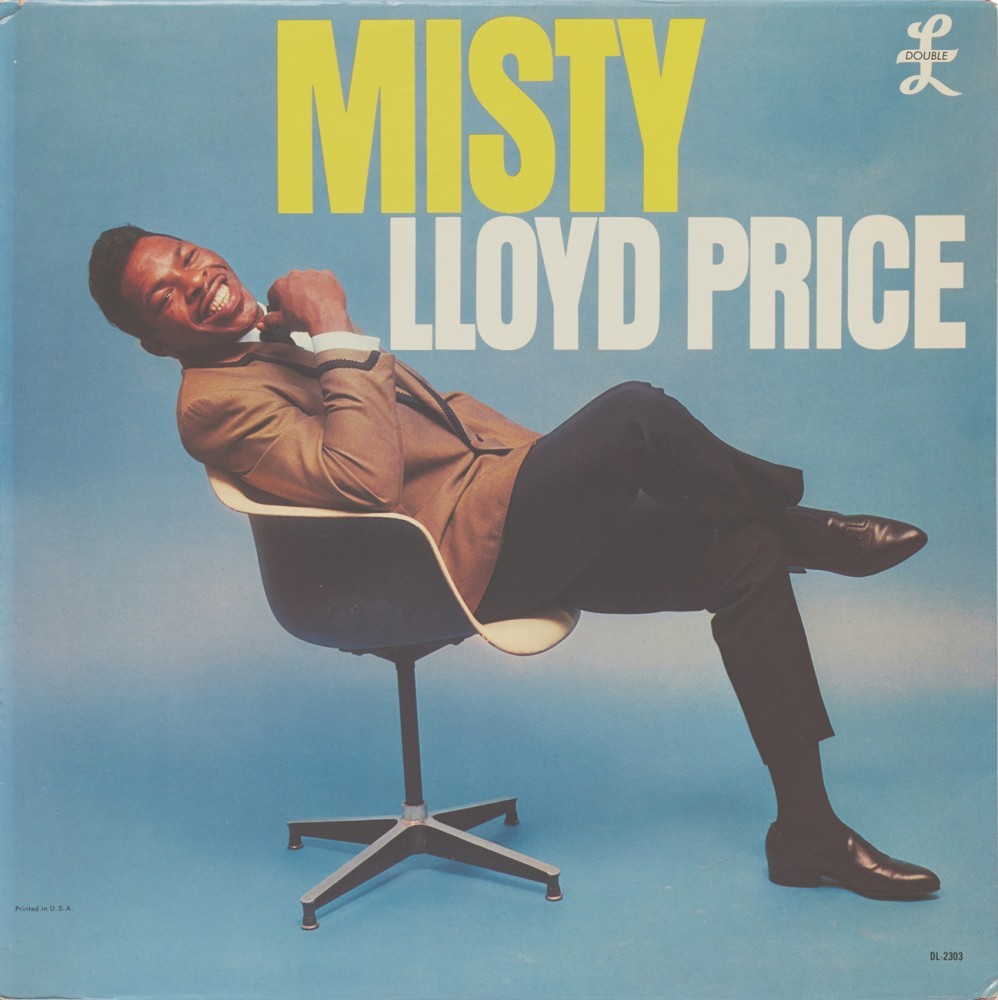 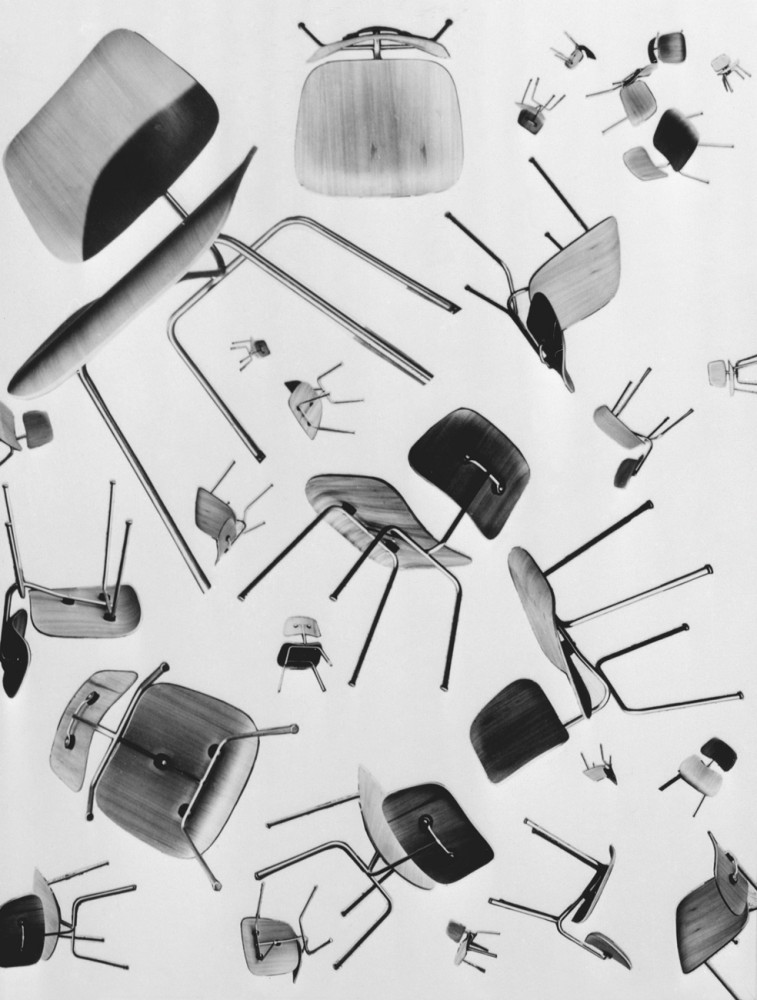 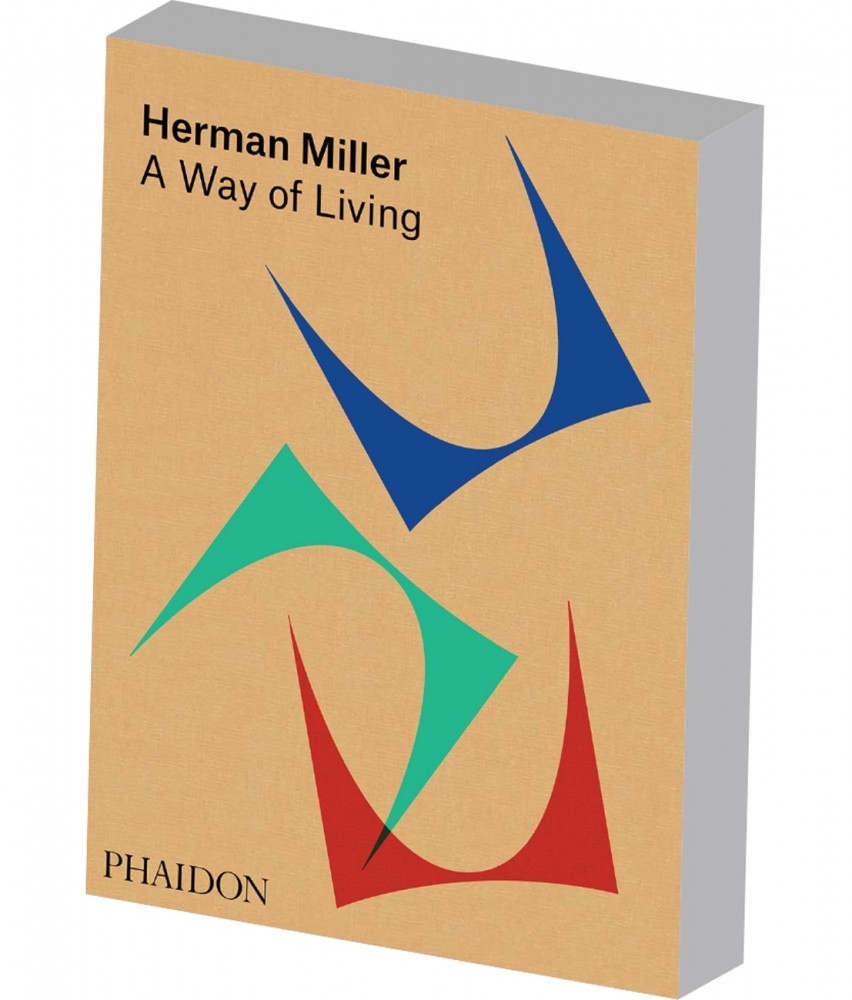 Cover of Herman Miller, A Way of Living

A new comprehensive survey of the work of Herman Miller builds on the innovative methods of past graphic timelines. In 1931, John B. Sparks’s published The Histomap: 4000 Years of World History: Relative Power of Contemporary States, Nations and Empires, which the editors of Herman Miller, A Way of Living attribute as an antecedent influence. Spark’s graphic timeline, the first-of-its-kind in the 20th century which shows the expansion and contraction of world powers and lists major events in each entity’s history, served as important prior art for Charles and Ray Eames’ own pictorial timelines from the 60s and 70s, such as A Computer Perspective, Mathematica, and A Pictorial History of Herman Miller. While such timelines are chronological in nature, they offer a non-linear form of narrative that allows the reader to jump in at any point, skip ahead, jump backwards, and plot an infinite variety of sub-narratives from within the larger story.

The new tomb-like Herman Miller, A Way of Living proposes no less than ten pictorial timelines structured around events — many of them world firsts — that were crucial to the company’s development. Gilbert Rohde’s Design for Living exhibit at the 1933 Century of Progress International Exposition in Chicago; George Nelson’s pioneering 1944 Storagewall; the Eames’s equally pioneering 1946 molded-plywood chairs; The Herman Miller Collection catalogue of 1948; the 1961 opening of the firm’s Textiles & Objects store in New York City; Robert Propst’s 1968 Action Office 2 open-plan system, the very first of its kind; in-house graphic designer Stephen Frykholm’s 1970 poster for the company’s summer picnic, the first in a long-running series; William Stumpf’s 1976 Ergon, a pioneering ergonomic office chair; the 1999 Herman Miller Performance System, developed in partnership with Toyota to streamline production-line practices; and finally 2013’s Living Office, a holistic framework that responded to changing workplace culture. Spanning a decade or more either side of the selected event, each timeline provides essential background information and illustrates the long-term effect it had on Herman Miller and the world. Additional context is provided by an abundant supply of related events that occurred tangentially across society, industry, science, technology, design, art, and architecture.

With over 2,000 photographs, clippings from contemporary publications, reprinted essays, correspondence, patents, advertisements, drawings, and posters, this is the most exhaustive history of Herman Miller yet. But despite the enormous mass of material, the book’s nimble structure ensures a light reading experience, and even the most erudite of design-history geeks will find novel information. Among many personal discoveries, I was pleased to find the Halle Brothers Co. shoe department designed by Rohde in 1939, photography of the 1984 exhibition A Serious Chair at the Walker Art Center, and Clement Mok’s 1994 grid of 1,512 images showing the Aeron chair from every conceivable angle. For designers, books on design are analogous to the books of spells used by wizards and witches — filled with tricks we can learn from and adapt to our own work. Herman Miller, A Way of Living is a potent, abundant, timeless resource.

An abridged version of this review was published in PIN–UP 26, Spring Summer 2019.