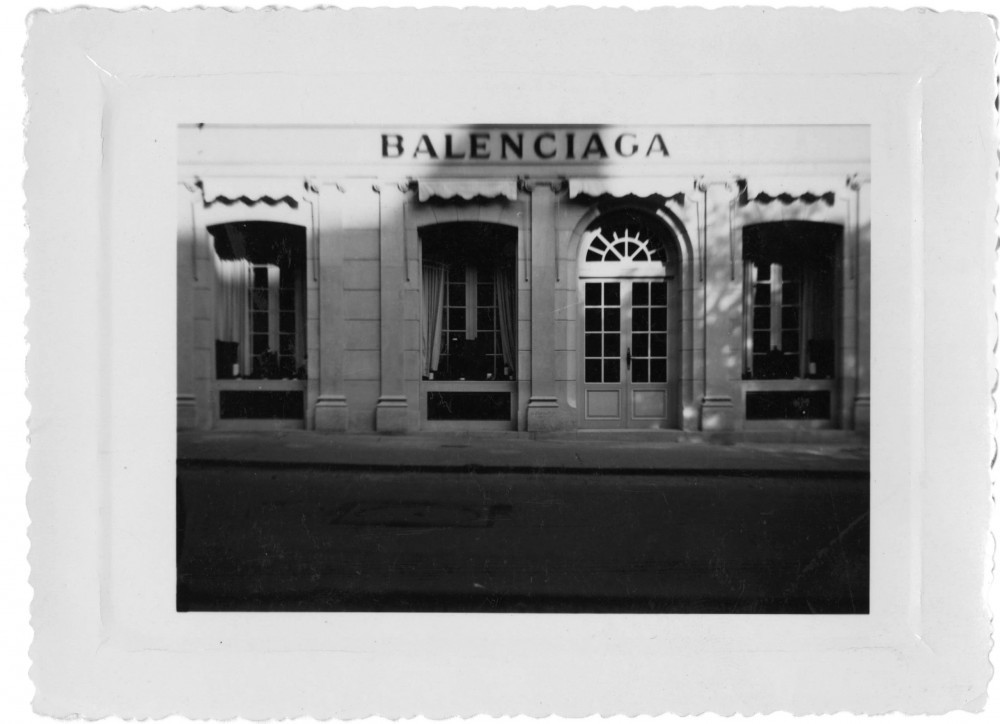 A vintage photograph of the exterior façade of 10 avenue George V in Paris, the home to Balenciaga’s headquarters since the late 1930s. 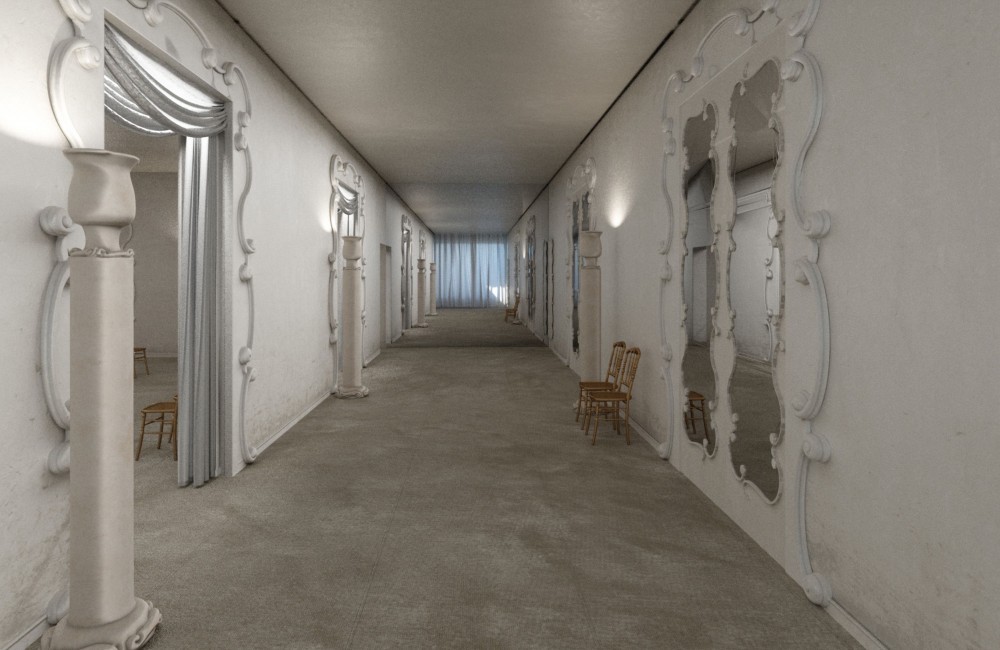 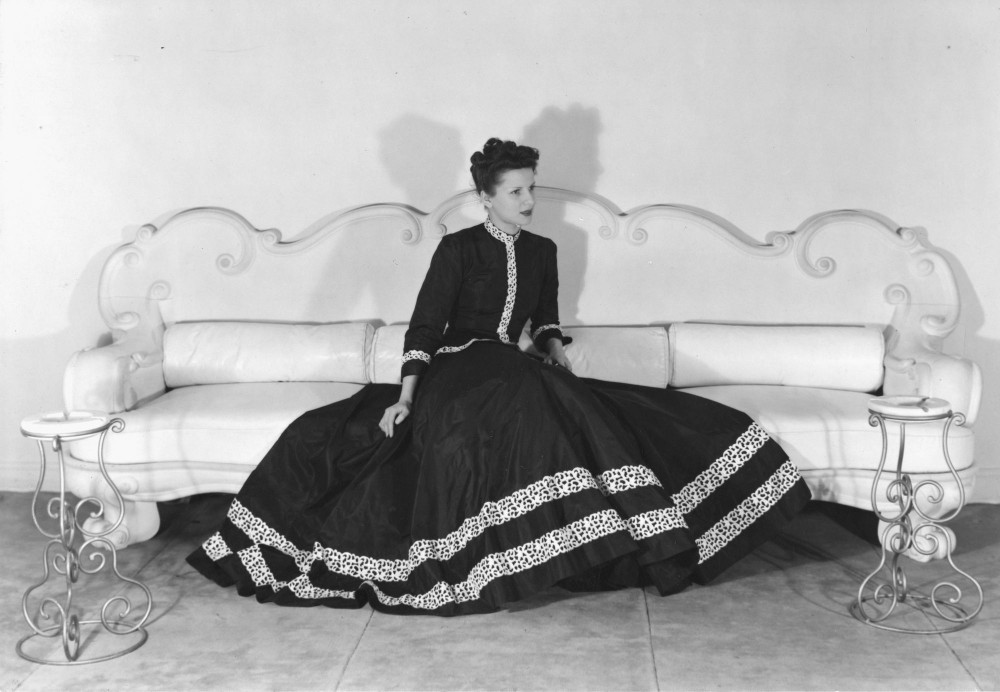 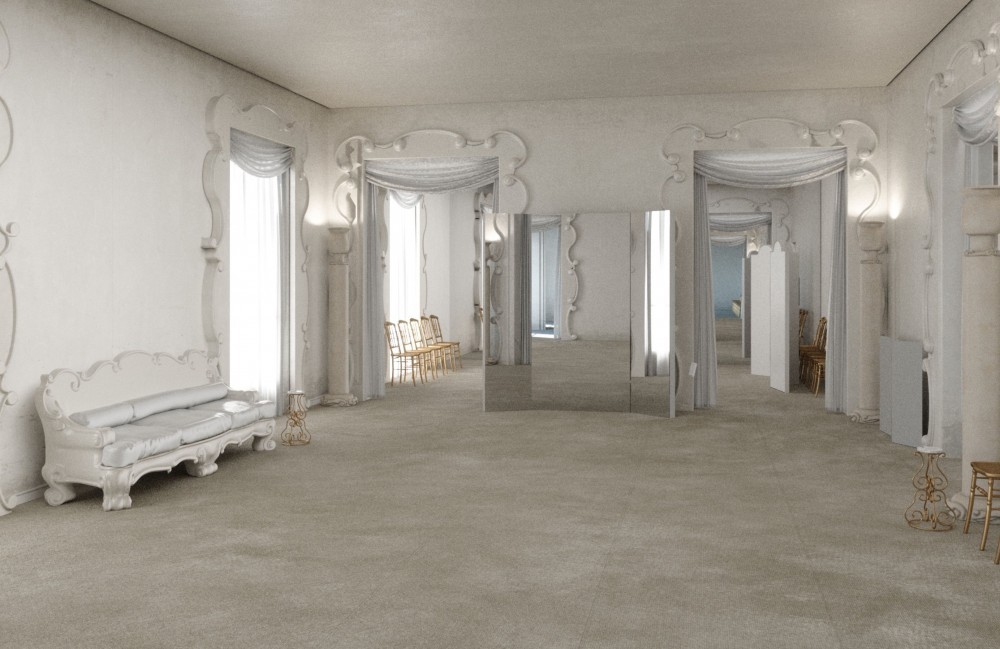 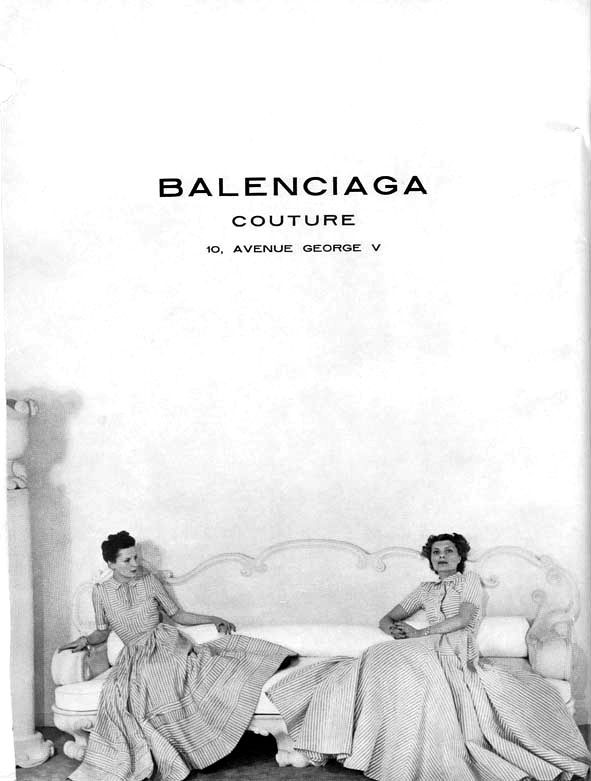 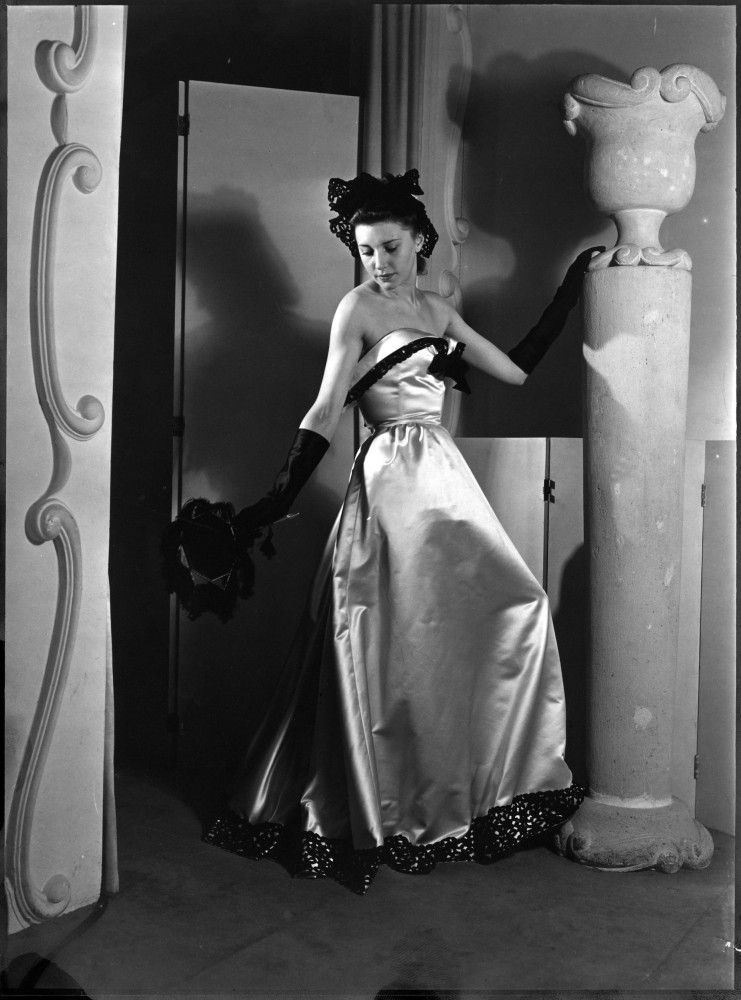 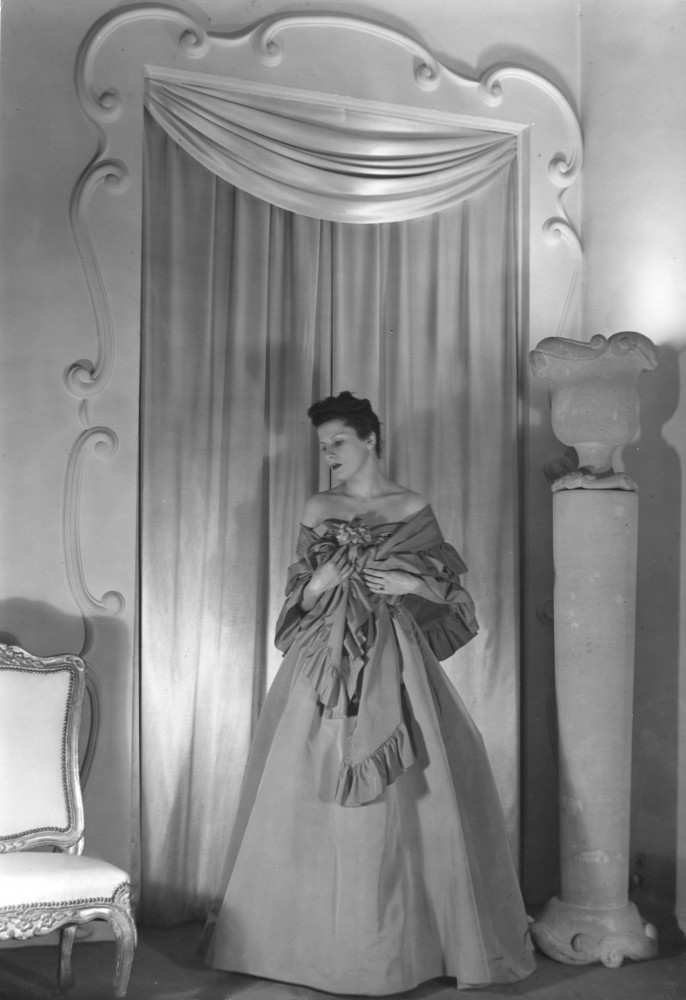 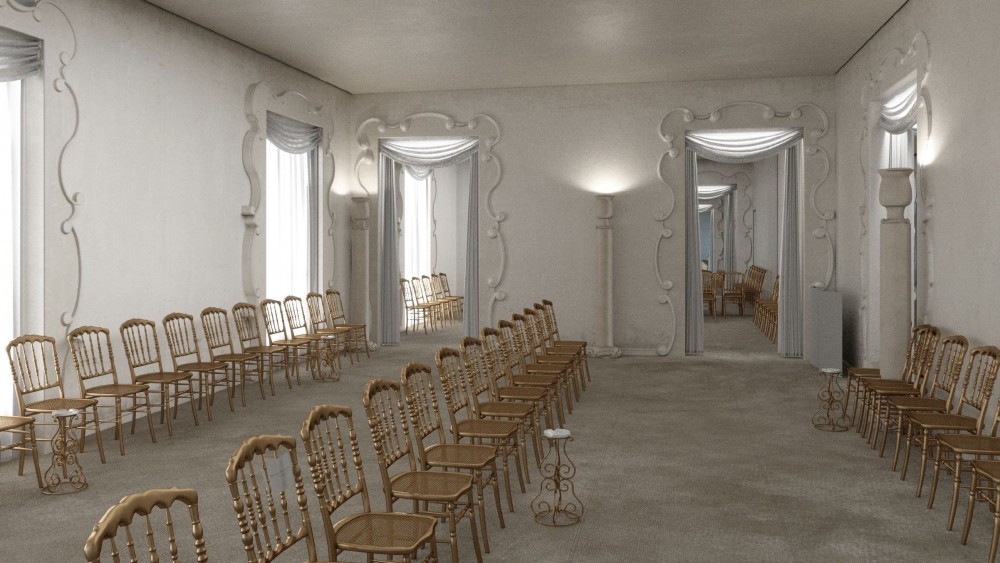 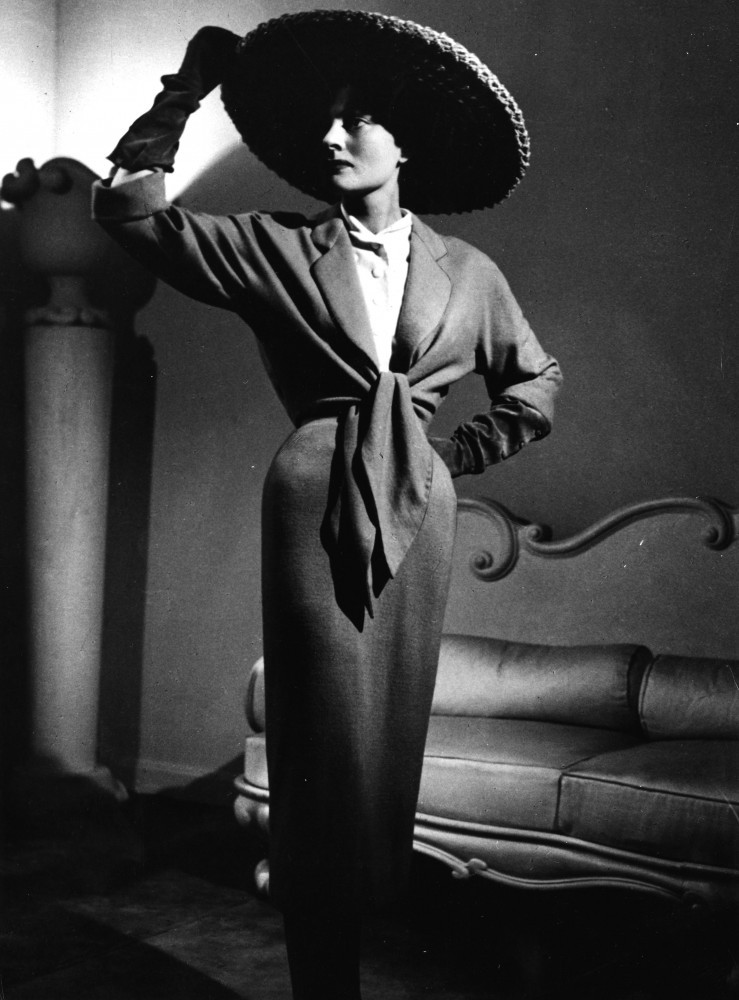 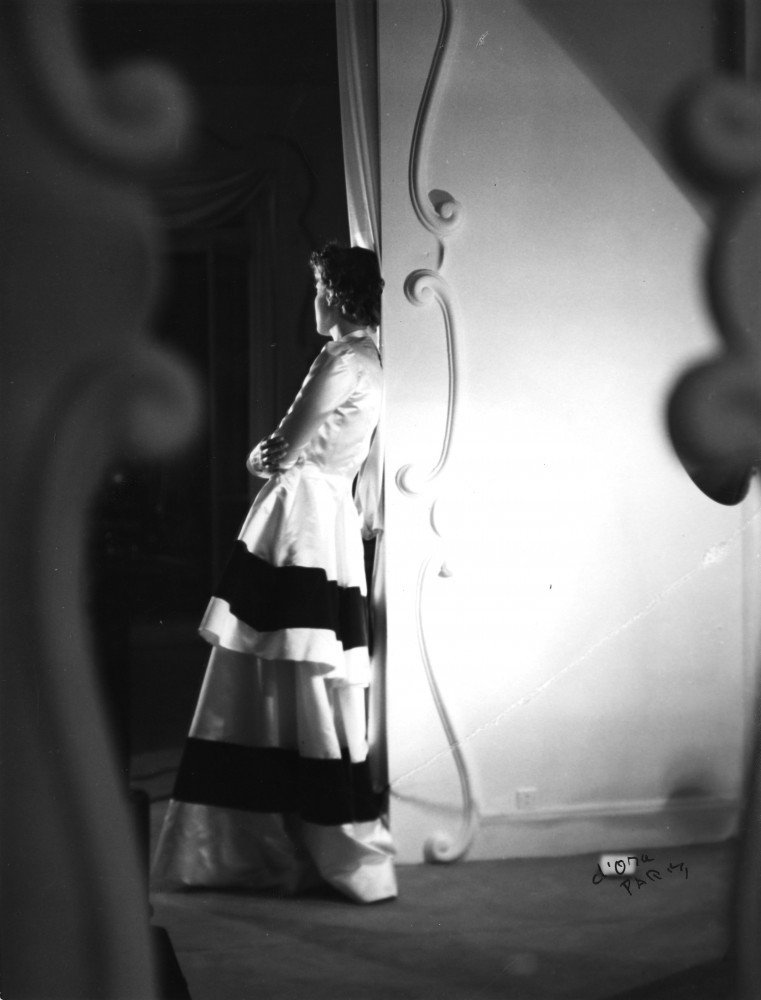 Curlicue motifs in white-on-white stucco were part of Cristóbal Balenciaga’s original Paris couture salon when it opened in 1937.

Little is remembered about Cristóbal Balenciaga (1895–1972) beyond his work — most notably, silhouette-transforming dresses with nicknames like envelope, balloon, sack, and baby doll. He kept to himself, even opting out of the customary bow after his shows. The people closest to him were those that worked with him, like the vendeuse Florette Chelot, his first Paris hire. It was she who told the biographer Mary Blume that he liked his martinis extra dry: “He would take a napkin on which he placed the ice cubes to dry them off so that there was no excess water.”

While his creations are defined by shocking colors and dramatic shapes, with attention to backs and trains, the ateliers in which the couturier worked were intimidatingly quiet, described in museum texts and biographies as monastic. “It was assiduity and concentration that reigned there,” says Gaspard de Massé, head of Balenciaga’s archive department. “During the fitting sessions, the people in the studio had to be as silent as the dresses.”

Monsieur (as he was known) Balenciaga’s reputation for austerity is just one way in which the House of Balenciaga’s namesake was not like its current artistic director, Demna Gvasalia. Appointed to head the brand in 2015, Gvasalia works best with plenty of noise around him. His studio, in a former hospital on the fashionable rue de Sèvres, is usually filled with eccentric characters and fast-paced music, closer to a party than a church service. Still, each designer’s taste might be summed up in the words of Chelot, describing M. Balenciaga’s drink of choice. Each ingredient, from atmosphere to product, is only there to make the drink stronger; nothing is watered down. When M. Balenciaga retired, in 1968, it was at a time when his fellow couturiers, like Coco Chanel and Christian Dior, were focusing on ready-to-wear lines and bags that would become their houses’ bread and butter. M. Balenciaga wanted nothing to do with that. Such was his devotion to the couture.

Paying homage to this legacy, Gvasalia is returning the house to the tradition that defined its founder’s career, reintroducing high-end custom-fit collections as part of Balenciaga’s busy production schedule. The first show will be on July 7, 2021. To mark the occasion, Gvasalia is directing a renovation of the couture house M. Balenciaga opened in 1937. The site will serve as a forged time capsule.

“There is no homecoming without a physical address,” says Gvasalia. “I naturally chose (10 avenue) George V, the main historic address of the house — that closed its doors 13 years before I was born — to be that home for couture again, some 52 years after its closure.” The building has served as a Balenciaga flagship ever since, but the historic salon, on the fourth floor, was never reopened. A near-perfect facsimile of it will now exist on the second floor, to be used for a biannual couture presentation. The renovation is headed by Sub, the Berlin-based firm hired by Gvasalia to oversee the brand’s 180-plus worldwide locations (see PIN–UP 29).

Modern day Balenciaga stores, like the fictional one featured in a groundbreaking video game that introduced Gvasalia’s Winter 2021 collection last year, tend toward a post-apocalyptic aesthetic. Their concrete-patched walls are sometimes stained with rust and hung with screens featuring video-art collaborations. Sub also works with Balenciaga on their runway and virtual shows. With crashing soundtracks and immersive animation, it might take some mental gymnastics to see a common thread between these and the mid-century presentations put on by M. Balenciaga, in which house models stepped noiselessly on a carpet — in a warm gray tone said to be chosen for its neutrality.

Some Balenciaga stores are, in fact, carpeted wall-to-wall in warm gray (or shocking blue, or green, or fuchsia), but these rugs are shaved with a repeating logo, like a digital watermark signaling self-awareness. Their storefronts, sometimes peopled with hyper-realistic mannequins wearing the collections, seem worlds away from the original boutique at 10 avenue George V, the windows of which “gave no hint of commerce,” according to Blume. Here, “Balenciaga forbade the display of merchandise,” she writes, in Master of us All: Balenciaga (2013). But there is definitely something monastic about what Gvasalia does, and what Niklas Bildstein Zaar and Andrea Faraguna, cofounders of Sub, do too. They are inspired by what the youth of today might consider places of worship, like underground parties held within urban voids, or the Internet — places that can feel at once blaring and desolate.

M. Balenciaga’s Paris premises were not “dainty,” like those of his contemporary Christian Dior, Blume writes, “But in their voluptuous austerity they were totally in keeping with the man and his house.” She describes the salon as “painted a non-distracting white” and quotes a former house model, Nicole Parent: “When I came to that house, I said to myself, ‘What an atmosphere, it’s like a convent.’” Chelot said, of working there, “The house style was somber.” In M. Balenciaga’s day, couture houses usually projected an aspirational lifestyle through their interior design, sometimes dripping with French neoclassical decadence. The Balenciaga couture salon, although richer than today’s interior trends, was relatively pared down, referencing at once the designer’s simple Basque upbringing and his refined tastes. The son of a fisherman and a seamstress, M. Balenciaga had made a name for himself and opened several houses in Spain before moving to Paris to escape the civil war.

He only played up his background on rare occasion, adding to runway shows a bolero jacket or sailor blouse here, a flamenco skirt or infanta dress there, and to his Parisian salon a thick curlicue motif in white-on-white stucco. The arabesques arched over white duchesse-curtained window recesses, around mirrors and doorways, and the silhouettes of settees. In old photographs, the salon’s ceilings and walls are otherwise undecorated, almost like the exterior walls of a seaside Spanish villa. What appear to be urns on pedestals are solid white floor lamps. Marble ashtrays are mounted on curling metal stands that aesthetically fall somewhere between the not-quite-Churrigueresque accents and the rows of gilt chaises Napoléon — the same chairs used by most couture houses at the time.

All of these elements are being remade with materials as close to the original as possible, says Bildstein Zaar. “We are being extremely faithful. Except for the ashtrays, which we’ve made into sort of dumbwaiter tables, since, you know.” They are also remaking an elevator that empties guests into the salon. It was famously upholstered and tufted “like a chesterfield,” he says, in red Cordoba leather — another house signature that appeared in abundance in the address’s boutique.

But, says Gvasalia, there will be a patination to the entire place that wasn’t part of the original plan. “I decided to replicate the original salons of that time in as much detail as possible, and in addition to create an authentically aged, dusty effect of the interior, as if the apartments were reopened after over half a century of being abandoned. The notion of time does not exist in couture to me — it is timeless in its effort for an impossible perfection.”

Once M. Balenciaga retired, the house saw a two-decade long hiatus, during which basically only a perfume (Le Dix, named for the house’s address, 10) was pushed. Then, starting in the late 1980s, several artistic directors took turns interpreting what had become a brand — easy separates, it-bags, logotypes, and, of course, sneakers. None, until now, have attempted to revive M. Balenciaga’s greatest passion: made-to-measure, exclusive dressmaking, using the country’s best artisans, finest materials, and highest standards.

This “homecoming” is a bold move in the current moment, when most luxury brands are trying to take up less space while producing increasingly approachable items. But, says de Massé, “Almost 50 years of silence — no other house has had such a break.” And Balenciaga was, to many, the couture house. “The master of us all,” as Dior himself once said. “You will laugh,” says Lionel Vermeil, Luxury Prospective Director at Kering Group (Balenciaga’s parent brand), “but bringing back Balenciaga Couture, it’s like if the Eiffel Tower had gone away and then it was coming back to Paris.”

On top of providing the space for a collection presentation, 10 avenue George V will show items from Balenciaga’s archives that are usually tucked away or spread between museums. The ground floor, says Bildstein Zaar, will offer a stark contrast to the salon and the boutique. Here, minimalistic cabinetry includes pneumatic vitrines with darkened glass to protect materials sensitive to light. For the July opening, these will face the storefront’s windows — part of the restored-to-original façade with a 1936-style awning — displaying merchandise from a time when any “hint of commerce” in the window was verboten. It’s the type of rule-breaking Gvasalia is known to get away with, infusing a fashion relic with the kind of un-watered down wit that defines a new era of Balenciaga.

All images courtesy of Balenciaga.