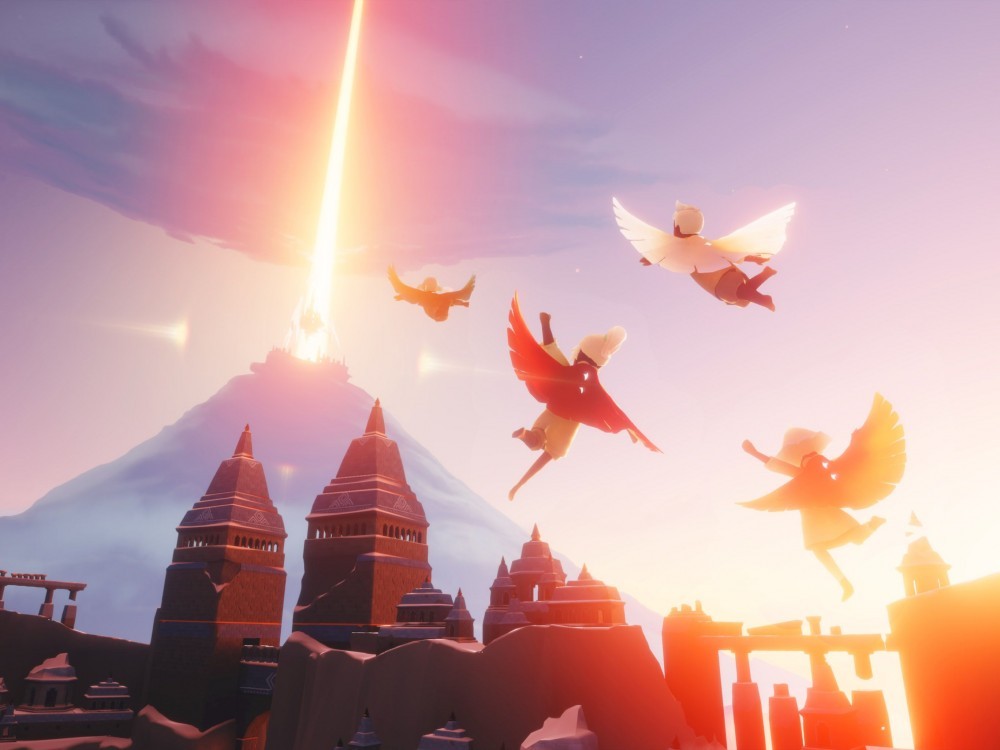 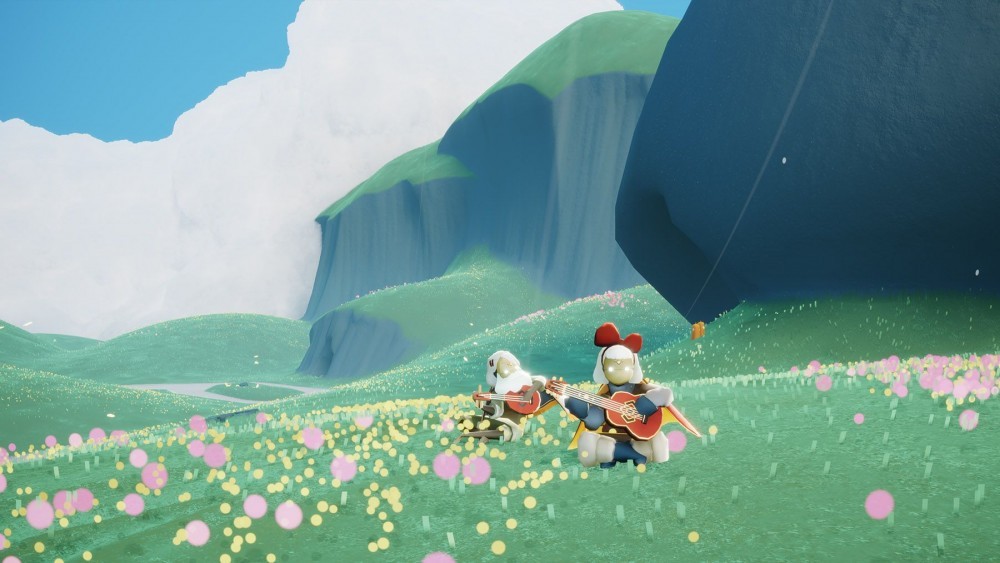 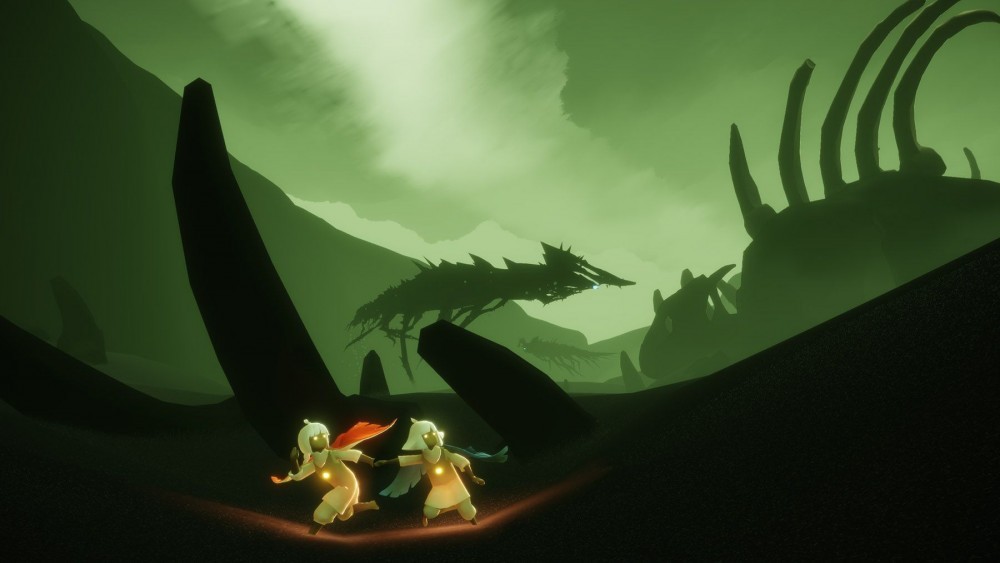 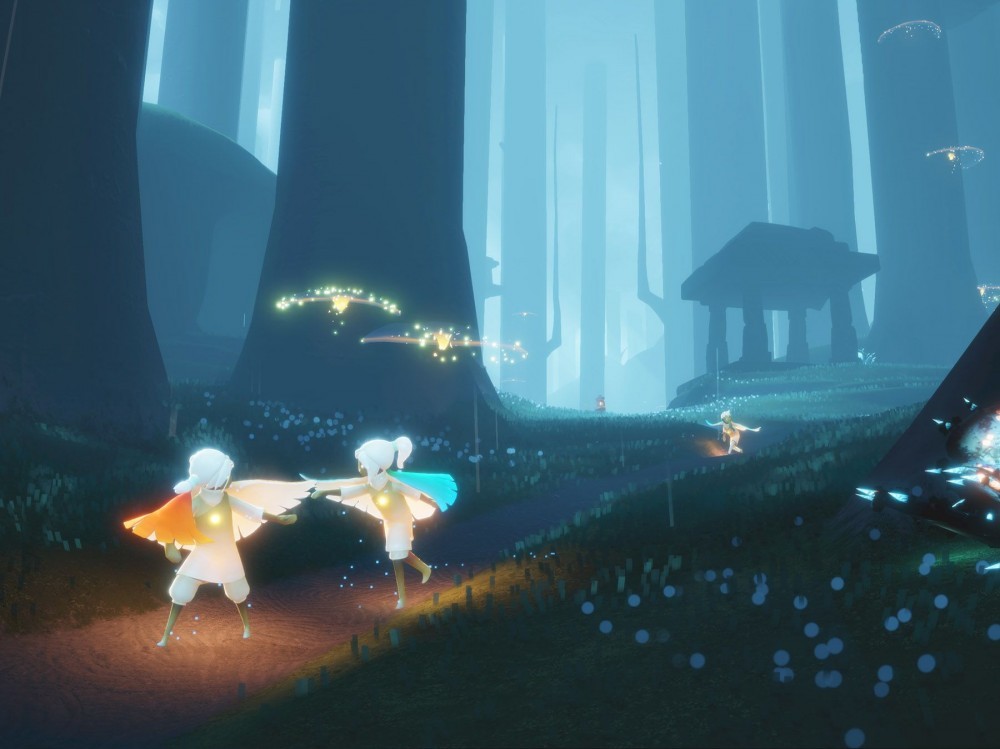 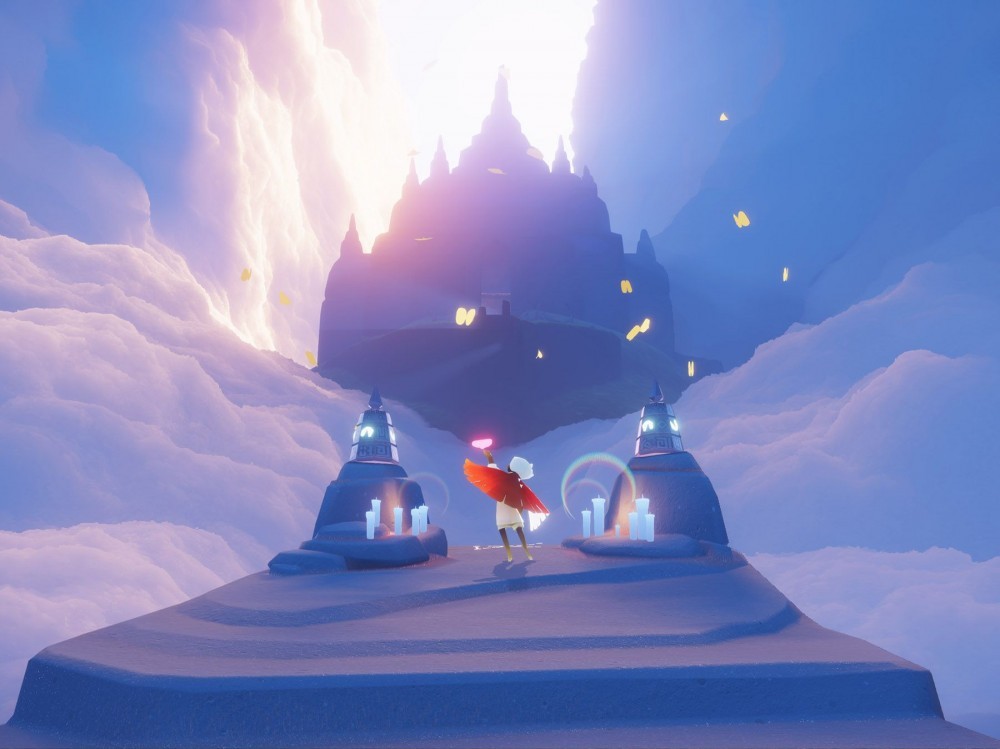 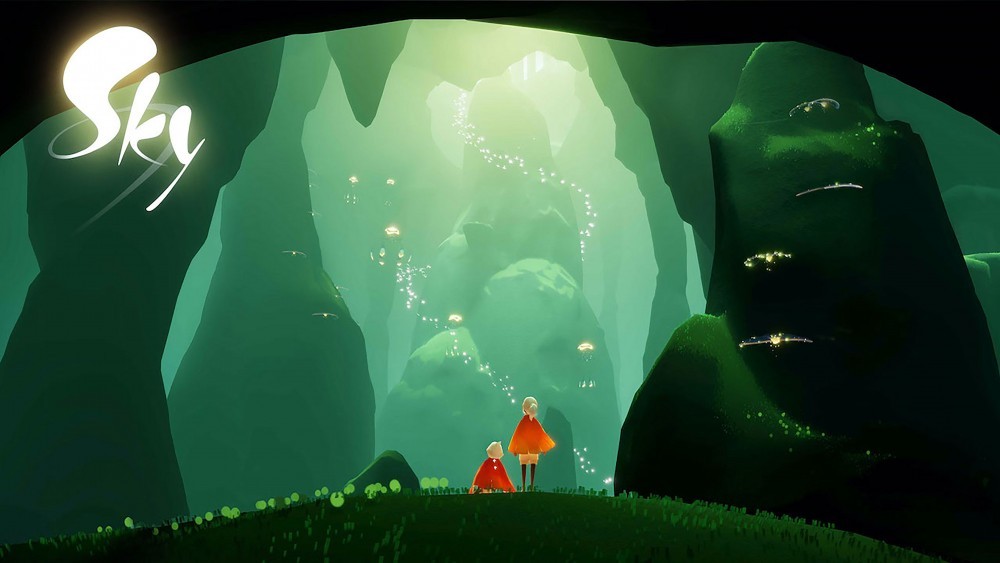 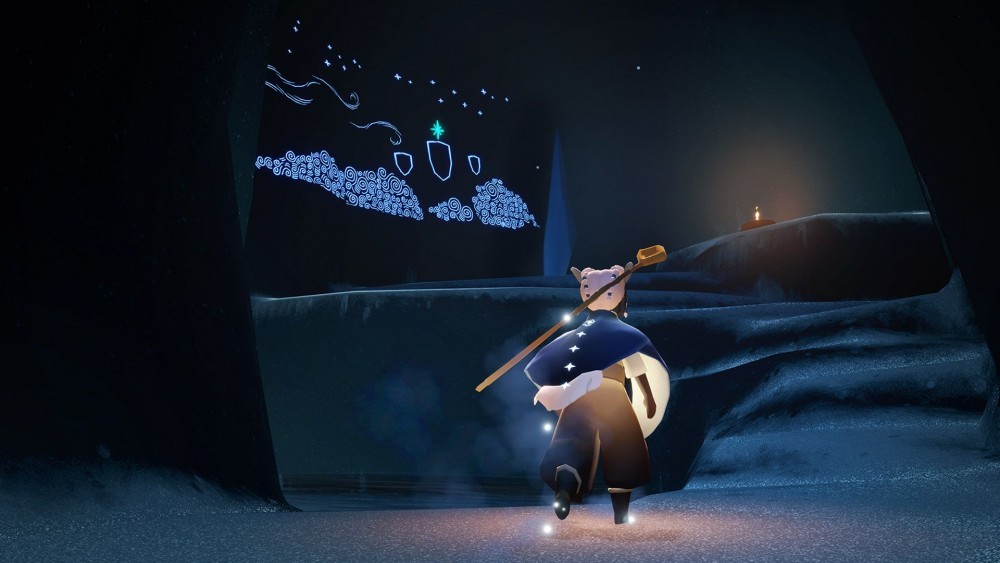 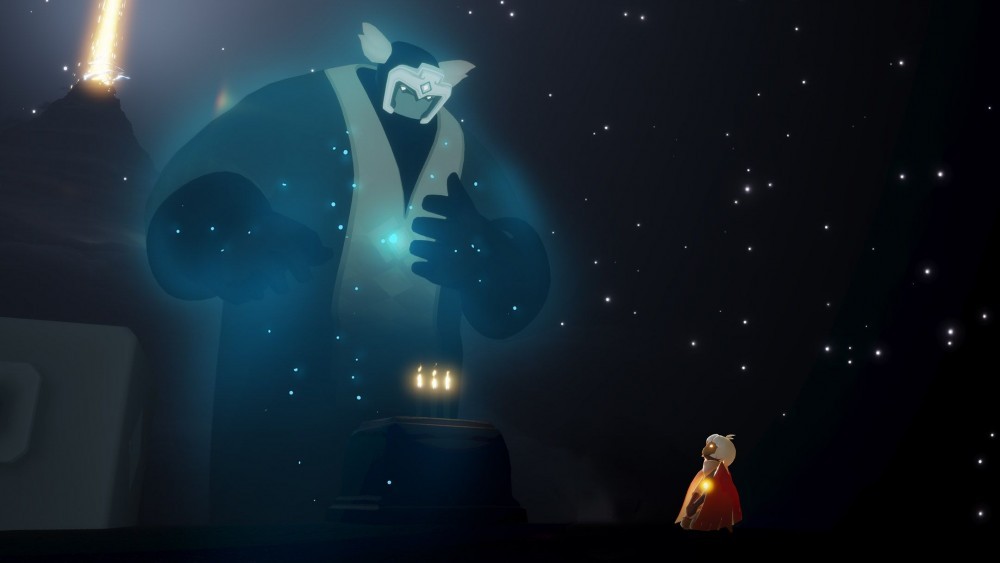 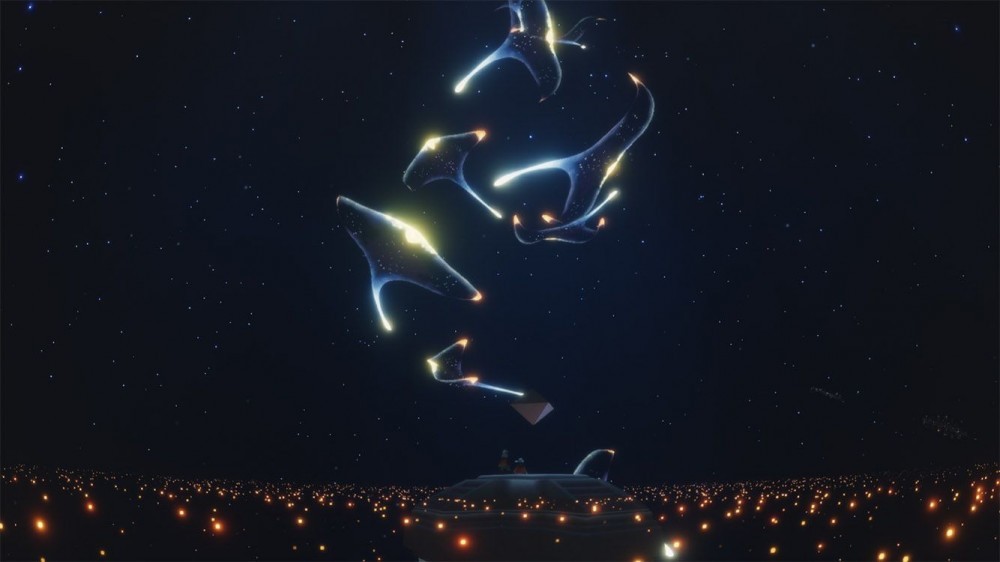 FAIR GAME: Sky Is A Virtual World Designed To Cultivate Kindness And Collectivity

Sometime after the commencement of Miami’s lockdown, I became enraptured with a less pressing reality: the kingdom of Sky, Children of the Light, free to play on iPhone and Android. Released in 2019, Sky is thatgamecompany’s first MMO (massively multiplayer online game) and a thematic extension of Journey, which premiered five years earlier. I’ve spent the last several months exploring Sky’s astonishing landscapes, thrummed along by its orchestral soundtrack, and reveling in the architecture of its virtual world, a space uniquely designed to cultivate kindness and collectivity. As a Sky Kid, I am glowing, genderless, and constitutionally purposeful: sent to my ancestors’ fallen empire in the clouds, I relive their memories while collecting the light of other spirits, which I’ve been tasked with returning to the stars. I’m usually flying — to the cosmos themselves — then later dying, tracing the story’s themes of sacrifice and rebirth, and I am rarely alone; moving through each realm necessitates collaboration with other players. Midway through my first session, I gleefully told my boyfriend, “This feels like a Ghibli movie.”

In interviews, TGC’s developers often reference the films of Hayao Miyazaki, whose visual presence is everywhere: deep forests, preternatural entities, painterly details — grasses illuminate and mushrooms audibly hum with your touch. In a conversation with VentureBeat, company president Jenova Chen described his “passion…to see a day when games will be treated as equal to poetry, to novels, to film.” In 2006, at a conference entitled “An Epic Debate: Are Video Games an Art Form?” Roger Ebert, who’d never played a video game, famously declared they certainly weren’t. He later doubled down in response to a 2009 TED Talk by Kellee Santiago — a co-founder of TGC — insisting “no video gamer now living will survive long enough to experience the medium as an art form,” that the goal-driven objective of video gameplay, even the most immersive, precluded its kinship with “a play, dance, a film. Those are things you cannot win; you can only experience them.” But you can’t win Sky; its completion only spurs richer, subsequent cycles. Rendering the game plainly experiential, TGC sought to evoke players’ awe and nostalgia, and to make such feelings the entire point. Emotions might be key to expanding the gaming community beyond its acolytes; delight is more accessible than the inessential stress of beating a game. “Emotions invoke reflections,” Atlas Chen, TGC’s lead game designer, tells me over email. “When you are deeply touched, you look back and try to understand what happened. This reflection makes people better human beings.”

Growing up, Jenova felt spurned by the gruff climate of MMOs like World of Warcraft — the ridicule and posturing, the blatant semaphores of masculinity — and disillusioned by the lack of cooperation in lieu of, say, shooting each other. To create kinder dynamics in his own games, he’d give players less power, establishing a set of mechanics defined as much by their absences — no weapons, no instant chat ability — as their additions. Atlas was on a like-minded mission. “I see the game mechanism as a bridge that leads players to rediscover the good nature they already have, but was forgotten in a society where personal achievements and competitions are mostly appraised,” he says. In Sky, more friendships yield more fulfilling gameplay; just being near another player recharges your energy. To eliminate the potentiality of quid pro quo, players never become wholly dependent on each other — for example, they can “receive hearts from not only other players’ gifts, but also from helping the NPCs…thus (making) it more of a genuine choice of the players. You can’t force altruism,” Atlas adds. The game is designed for spontaneous benevolence, and imagines a world in which it exists for its own sake. Its debut was delayed — mitigating selfishness takes time.

The result is a splendorous world of shared vulnerability. With few instructions, players’ curiosities will guide them among Sky’s mountains, beaches, and gold-spired temples. Every Sky Kid is dark and luminous, and when you make a spontaneous friend, a vaguely articulable name is automatically generated. Common enemies must be skirted rather than defeated, and multiple players are required to complete most puzzles. You’ll communicate using emotes — hand-holding, laughing, dancing — and eventually chatting, if you’d like. Sky’s realms correspond to phases of human life — the blithe plains of Daylight Prairie, the forlorn vastness of Golden Wasteland — and, explains Atlas, “different stages of human history,” creating “a thread that inspires the different lands across the Kingdom of Sky.” It’s a sublime game, the primary mechanism alone — flight — a real pleasure. “Who doesn’t ever dream to fly?” says Atlas. “I remember during childhood when I was lying on the grass, looking up, I wanted to catch the stars in the sky… Flying to me is a natural metaphor for growth, liberation, and transcendence, which have been what I’m interested in exploring in my game design for quite a few years.” Though Atlas joined TGC after the release of earlier titles like Flower, which also incorporated flight, he suggests “maybe that is destiny — I released Gemini in 2016, a game about two stars flying from earth to the sky together.”

In Sky, you and your friends are the stars, sewn together by the necessity of teamwork. Tender altruism flourishes. One evening, a Sky Kid took my hand, no questions asked; I eventually learned his nickname was Momon, who lives in Vietnam, is ten years my junior, and has become one of my dearest acquaintances, our epistolary friendship existing mostly within the game but no less valuable than any other — he reminds me, continually, to remember to sleep. There’s also Chestnut, who lives in mainland China and always seems to sign on when I’m in need of cheer. Unable to visit my sister and her children in L.A. due to the pandemic, together — with her dear offline friend and my own — we’ve formed a squad, looping others into our virtual family. The stories shared with me on Sky, by dint or in spite of their tellers’ anonymity, are too private to share, as if I were breaking a promise. But I feel nourished by these gentle exchanges and the uncanny experience of being depicted, together, as children.

The player community, Atlas tells me, “has kept expanding recently. While I’m not sure if the current situation in the U.S. and the whole world is part of the reason, we do hope that Sky is providing healing to our society at this time.” Sky is benignly addictive by design, much of it gamer-directed. Unknown territory is tested first by players, “before we truly understand the consequences of our design,” says Atlas, and concept art is often made public. Apart from a core goal of ancestral spirit restoration, Sky, like other online games, incentivizes daily log-ins — bi-monthly seasons, opportunities to candle-forage. Purchasable add-ons are available, but TGC is intently transparent about their data-collecting techniques, and you can have a moving gameplay experience without spending any cash. On a typical day, I might pop in to gather candles, send light to a friend, or have a musical jam session. The gaming community is notoriously hostile; Sky tempers competitiveness by removing it.

Last month, TGC launched the Days of Summer Lights event, during which players could place paper boat-messages into the game’s ponds and oceans. Their appearance was random, with no guarantee the intended recipients would find them. Unsurprisingly, the notes were soul-baring: “May we meet each other in the next life.” “My life is very complicated, just so you know right now.” “I love you deep in my heart. And im sorry.” “What a sweet thing to have you in my life. My music twin. Thank you for letting me in.” Atlas tells me that when TGC works “for the benefit of our players, the players return us tremendous support and love, even though there are still many imperfections in our work, waiting for us to improve.” Players must find love in each other, too, making space for it in their own, self-narrated worlds.

Images courtesy of the author and thatgamecompany.