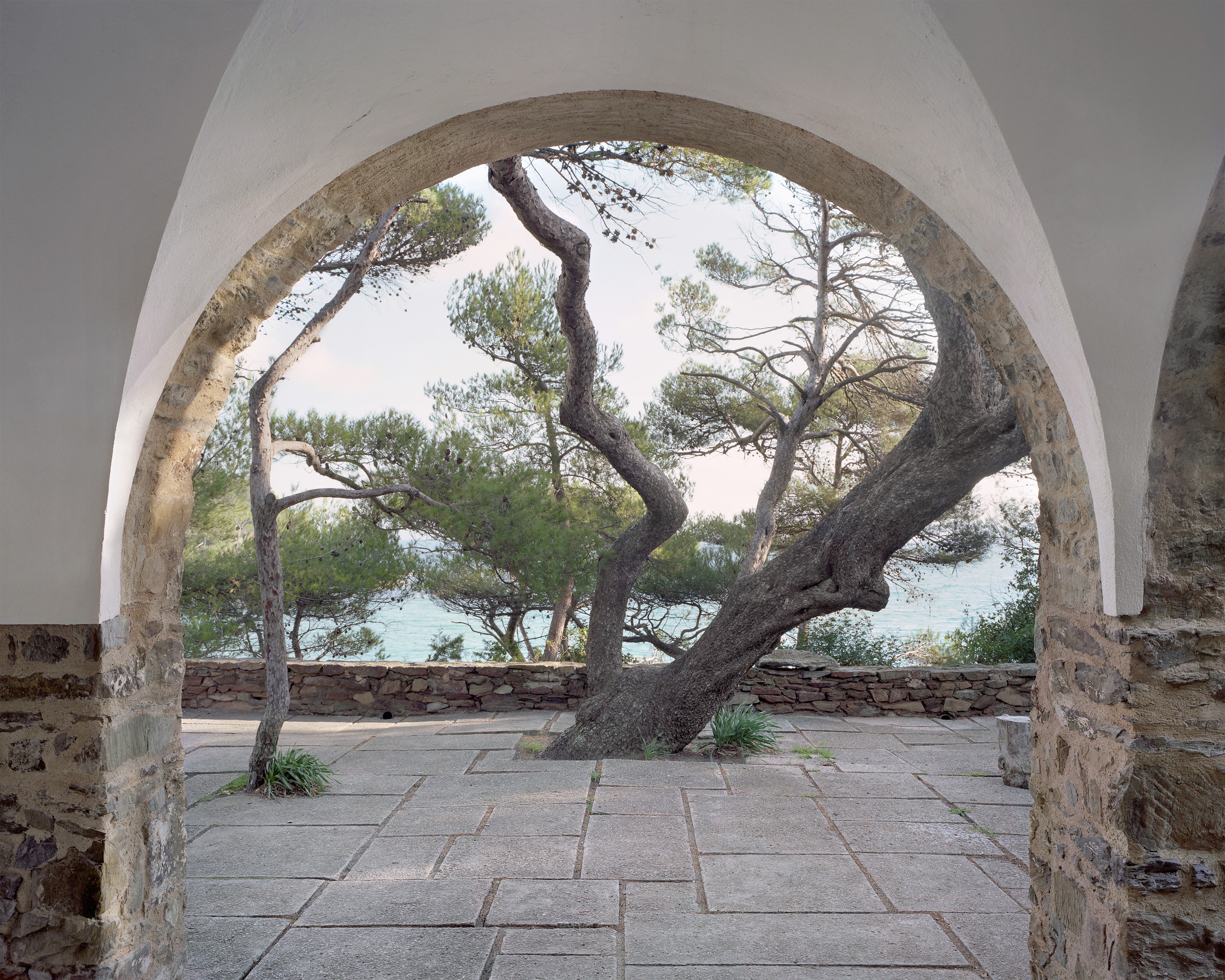 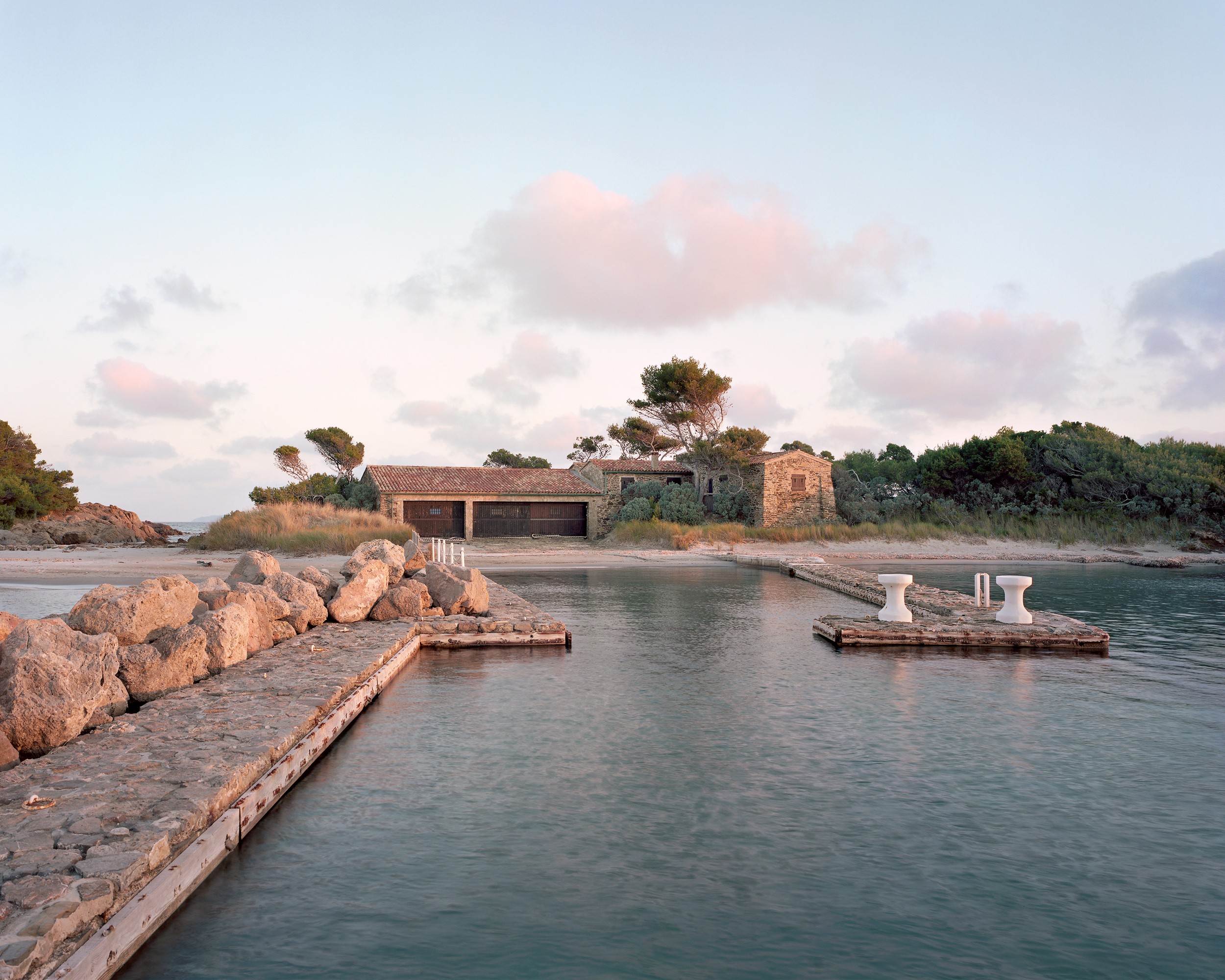 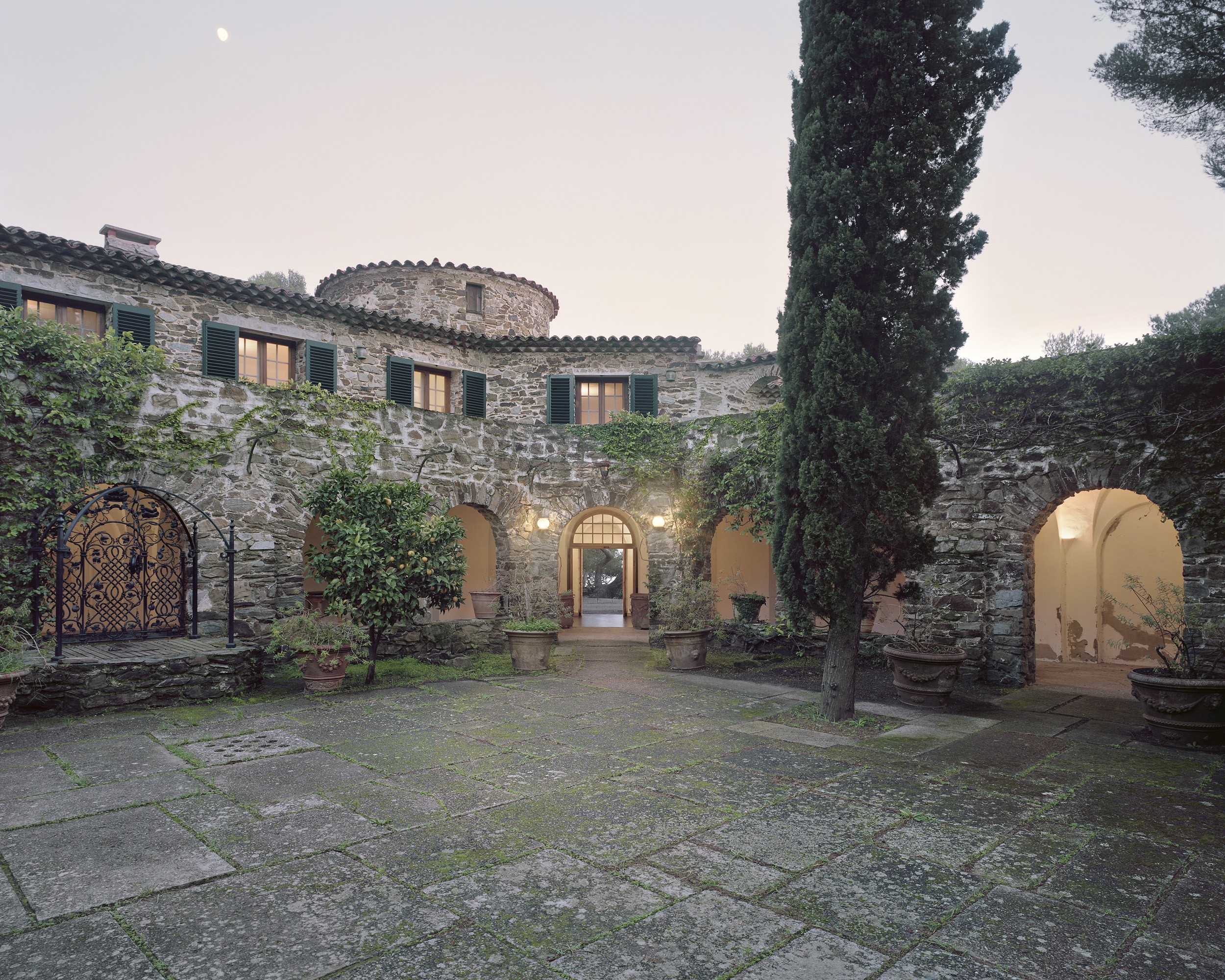 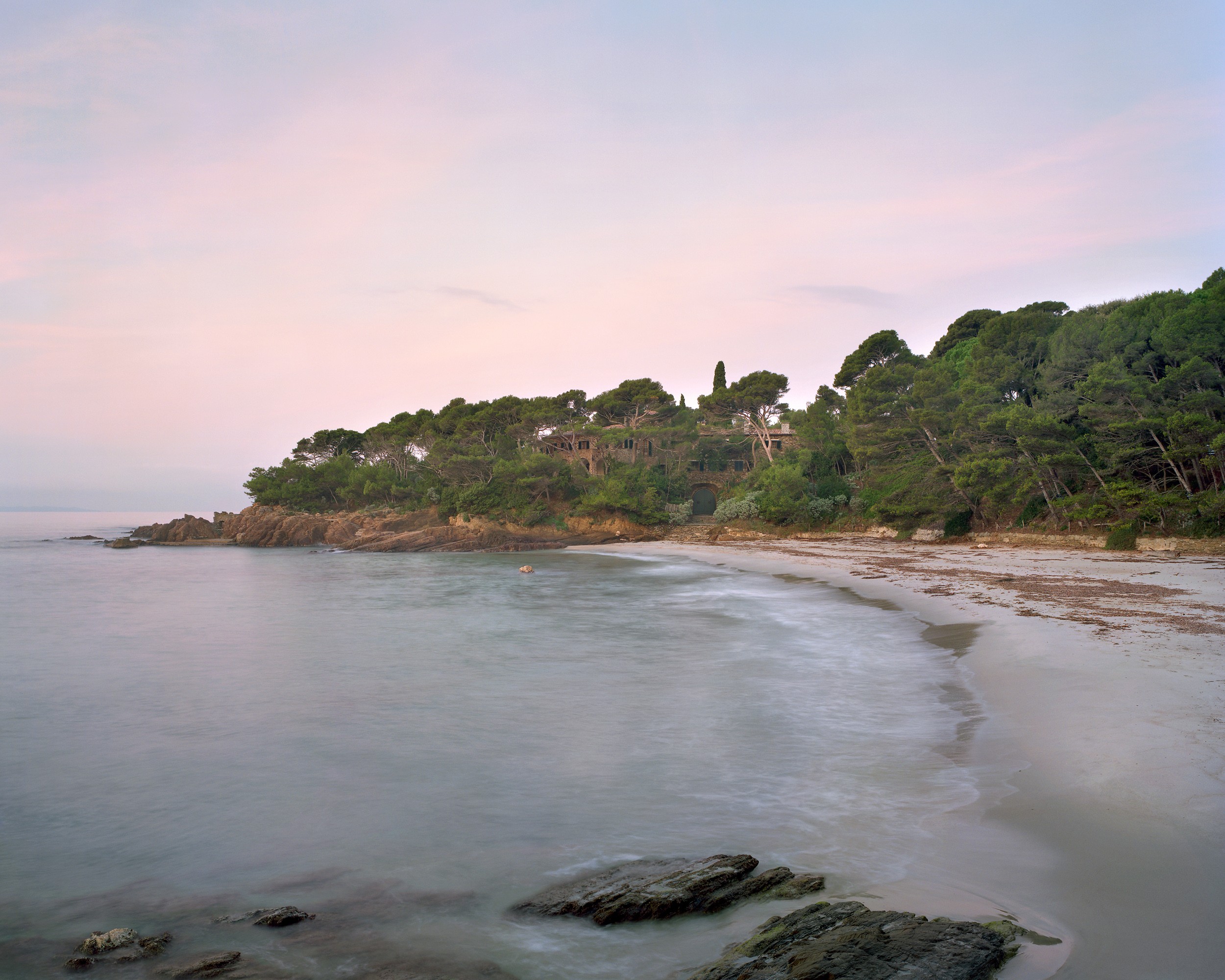 Avant-garde winter playground of Vicomte Charles and Vicomtesse Marie-Laure de Noailles, the Clos Saint-Bernard in Hyères — or Villa Noailles, as it’s now better known — is one of several mythic early 20th-century properties on the French Mediterranean coast. Eileen Gray’s E-1027 and Le Corbusier’s cabanon can be found further east towards Italy at Roquebrune, while Théodore Reinach’s ancient-Greek-style Villa Kérylos sits dramatically on a promontory at Beaulieu-sur-Mer. But there’s one house that’s rather less well known to the general public, a place that was long the preserve of a very select group of initiates — Yul Brynner, Charlie Chaplin, Greta Garbo, Richard Nixon, Jean Seberg, and several French presidents among them. The property in question is the Villa La Reine Jeanne near Cabasson, in the Var, which was built by American architect Barry Dierks in 1928–33 for aviation magnate and former World War I flying ace Paul-Louis Weiller. Two reasons explain its mystery. One is the acute discretion of Weiller and his heirs, who up till now have shunned all publicity with respect to the property. The other is its location and architectural discretion — not only invisible from the road, because hidden among 70 hectares of pine and cork groves (which also hide it from the air), the villa is difficult to discern from the sea, too, so much does its low-lying vernacular architecture hug the coastline and blend in with its setting.

While working on their own villa in the region, architects Benjamin Lafore and Sébastien Martinez Barat stumbled on La Reine Jeanne quite by accident. Their curiosity piqued, they decided to find out more, a quest that ultimately led to an exhibition about the house which was shown earlier this year at (appropriately enough) the Villa Noailles.

Villa La Reine Jeanne was the third of a total of 102 houses that Barry Dierks built on the Côte d’Azur. Born in 1899, this Pittsburgh native began his studies at the Carnegie Institute of Technology before coming to Paris in 1920 to study at the prestigious École des Beaux-Arts. To help finance his stay in France, Dierks took a job at the Banque Choillet, and there fell in love with the director, Englishman Eric Sawyer, who would become his lifelong companion and business partner. In 1925 the couple, who were close to Somerset Maugham, moved to the south of France where they built their own house, Le Trident, which quickly became their professional calling card. Their next project was the remodeling of Maugham’s villa, La Mauresque, in 1927, and subsequent clients included the Marquis of Cholmondely, Général Catroux, and French press baron Raymond Patenôtre, for whom Dierks completed his very last house in 1960, the year of his death. Staples of Riviera high society, Dierks and Sawyer were able to provide just the right sort of discreet Modernism for their moneyed clientele, where luxury did not rhyme with ostentation and the local vernacular was re-employed to serve new ends.

The perfect example of their style, the architecture of the Villa La Reine Jeanne is, in the words of Lafore and Martinez Barat, “an architecture of rumor. When you arrive on site, there’s almost nothing to see. Everything is extremely sober, discreet, and almost hidden. What’s always notable about Barry Dierks’s houses, and La Reine Jeanne is no exception, is the extraordinary and very subtle relationship to the site, with the house espousing the coastal topography in incremental changes of level and orientation.” Unlike his avant-garde Modernist contemporaries, Dierks had no problem with eclecticism, disposing here a cloister, there a Provençal roof or Catalan vault, and everywhere round-headed arches that run through his oeuvre like a leitmotif. But, according to Lafore and Martinez Barat, it was precisely this eclecticism that allowed him to achieve such a close relationship with the site. “It allowed him to respond to the landscape of the Côte d’Azur. Each different style always responds to the function.”

If the Villa La Reine Jeanne is so self-effacing, it’s to allow precisely that landscape to come to the fore. Indeed the house is designed so as to enhance visitors’ appreciation of the natural environment through the vistas and framing devices set up by Dierks, which one experiences in a continuous promenade architecturale cadenced and punctuated by the ubiquitous round-headed arches. Furthermore, as Lafore and Martinez Barat point out, “there’s almost a mythological relationship between the house and its site, in that a quarry was opened here to get the stone to build the villa. So it’s literally issuing forth from the landscape.” In contrast to Le Corbusier’s famous definition of a house as a machine à habiter, the curators see La Reine Jeanne as a “machine à divertir” — a “machine for entertaining” that is divided into different sequences around the lynchpin that is the cloister, with a wing for single guests, another for couples, and all the convivial spaces one would expect, including a waterside bar.

The exhibition at the Villa Noailles consisted essentially of photographs, with black-and-white images of La Reine Jeanne in its heyday in 1938 hung next to a new series of color prints (a coup for the curators, since this is the first time a photographer has been allowed into the house for decades) which were specially commissioned by the Villa Noailles from young photographer Laurent Kronental (whose extraordinary series documenting Paris’s Postmodern housing projects has been bringing him a lot of attention in recent months). Mixed in with these were pink-foam “figures” — life-size reproductions of various elements of the house’s architecture. As the curators explained, “The villa is impossible to read in its entirety. It can only be seen in fragments. So with these nine different models we tried to analyze the house, in a similar way perhaps to Roland Barthes’s dissection of love.” The exhibition also featured documents and memorabilia unearthed by Lafore and Martinez Barat during the six months they spent researching the house: as well as evidence of input from the flamboyant Elsie de Wolfe in the villa’s interior décor, they also unearthed a collective sonnet to the glory of the house, written by 30 of its illustrious guests and set to the tune of Cole Porter’s “You’re the Top.” The curator duo is now trying to trace Barry Dierks’s library, in the hope of understanding better this unjustly forgotten figure, with a view to either publishing a book or putting on a more extensive exhibition about an architect whom they boldly sum up as “a Postmodernist avant la lettre.”

The photographs shown in the exhibition Villa La Reine Jeanne, Barry Dierks architecte, along with essays about Barry Dierks and the house, can be found in the catalogue (bilingual English and French) published by La Villa Noailles and Archipress.