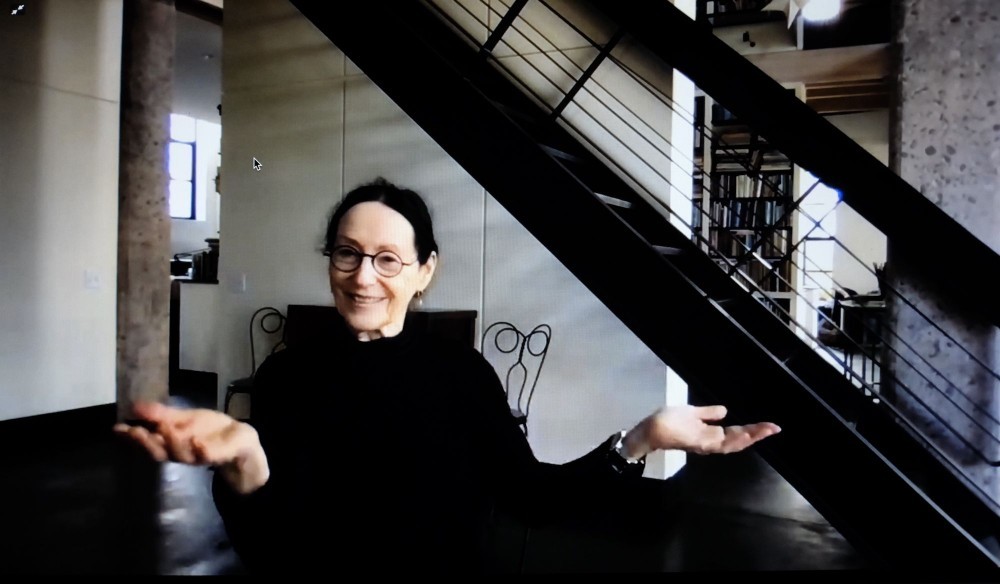 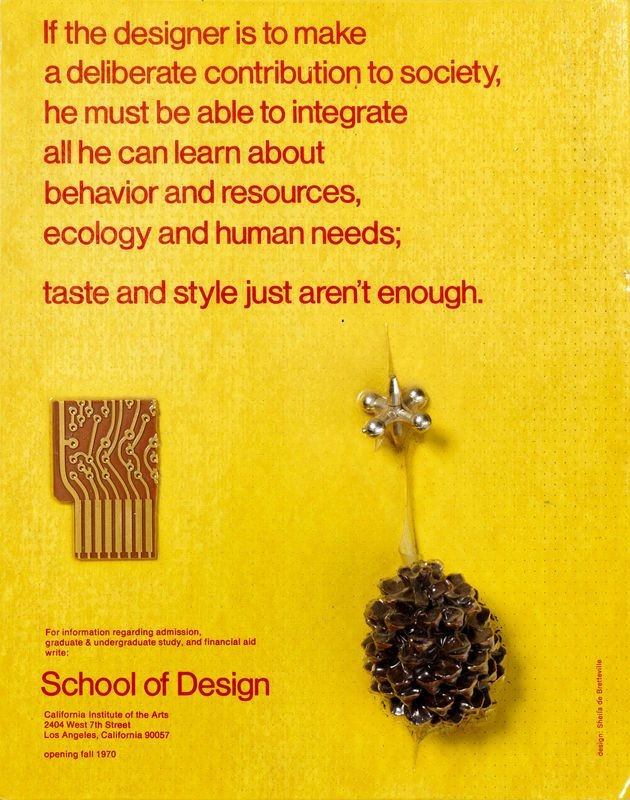 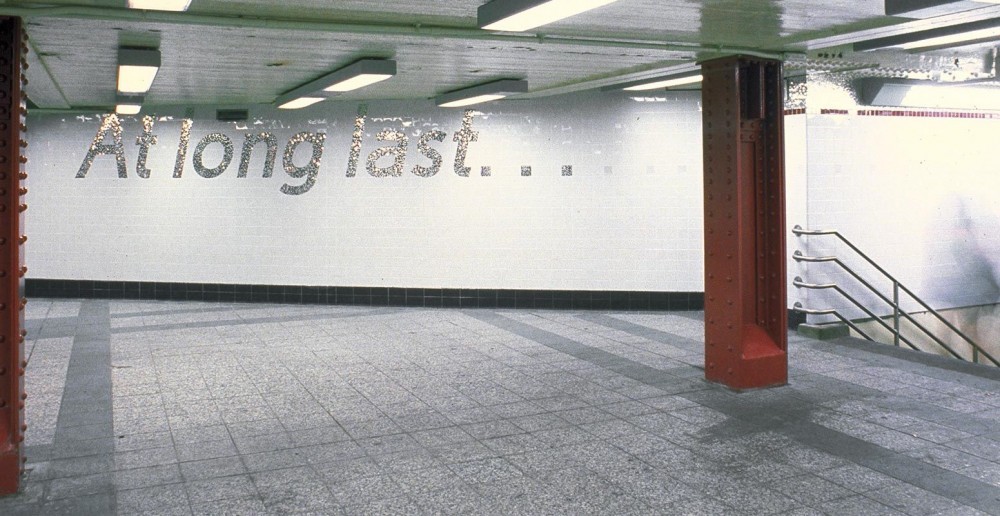 Sheila Levrant de Bretteville, At Long Last… (1999), at the northern terminus of the A train in Inwood, New York. 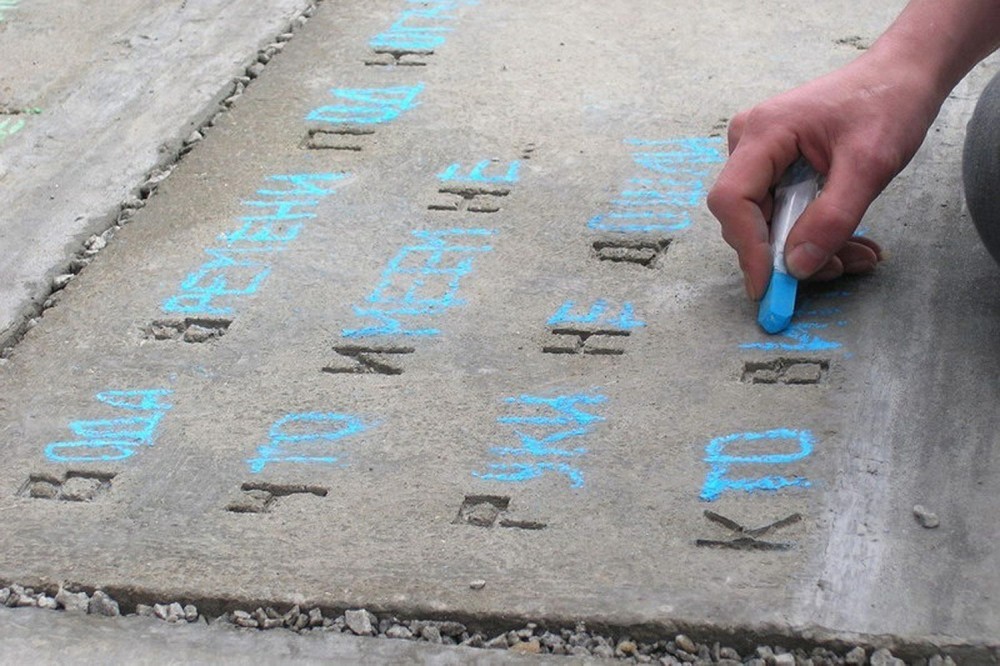 Detail shot of Step(pe) (2005), an entrance designed by Sheila Levrant de Bretteville for the entrance to the old Water Tower in Yekaterinburg, Russia. 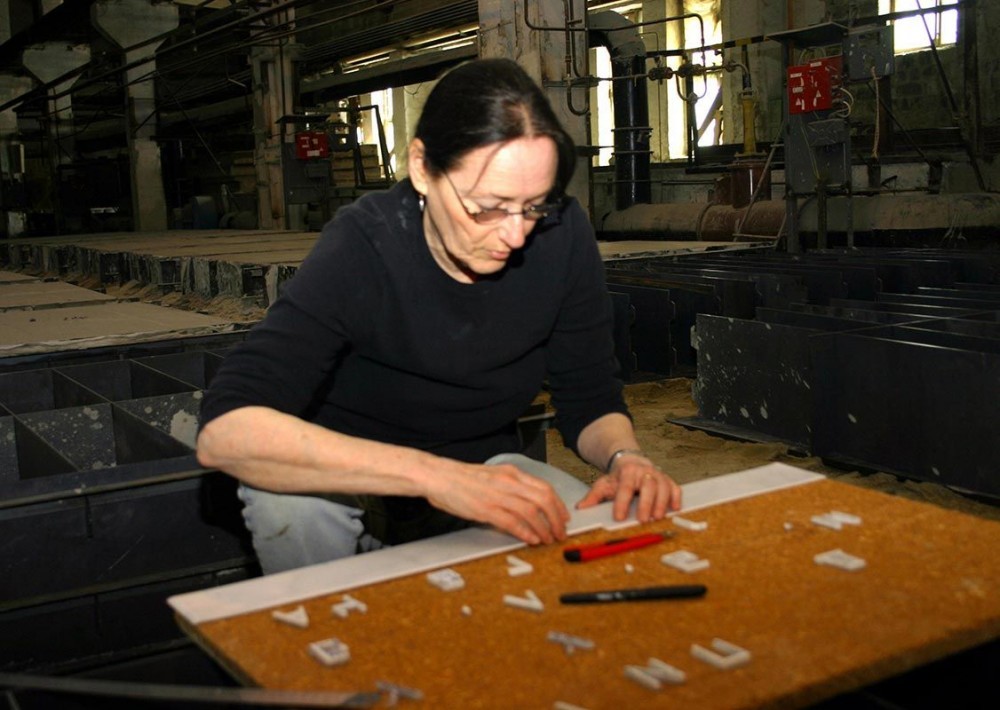 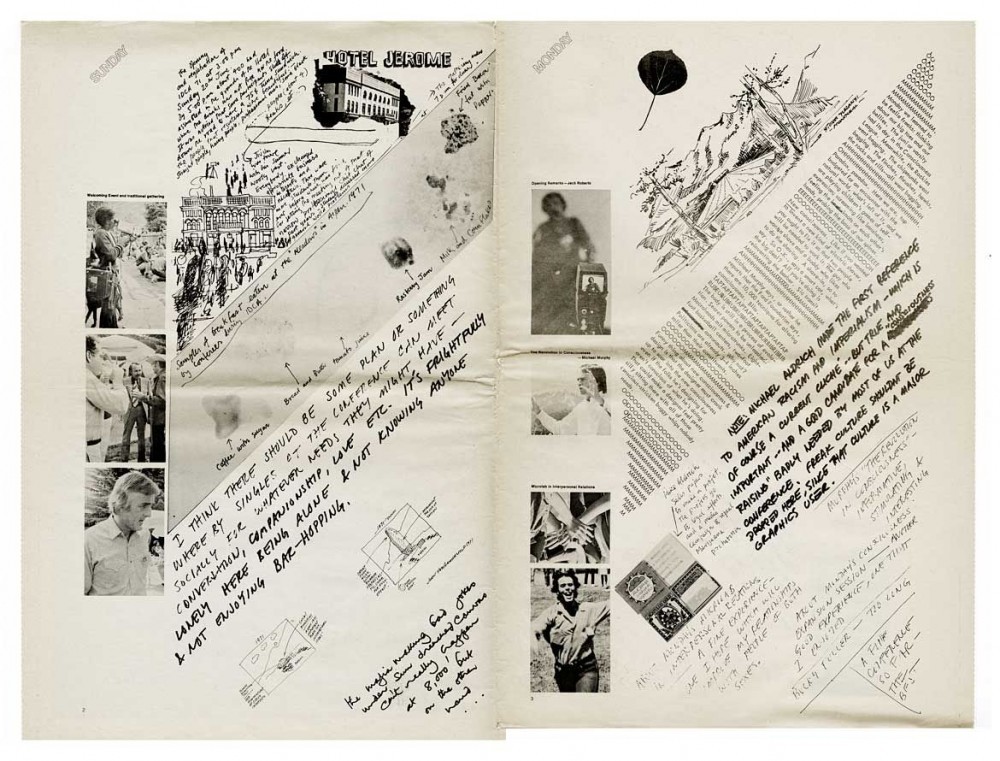 Commissioned by the board of the International Design Conference in Aspen, Sheila Levrant de Bretteville created a special issue of the Aspen Times in 1971. 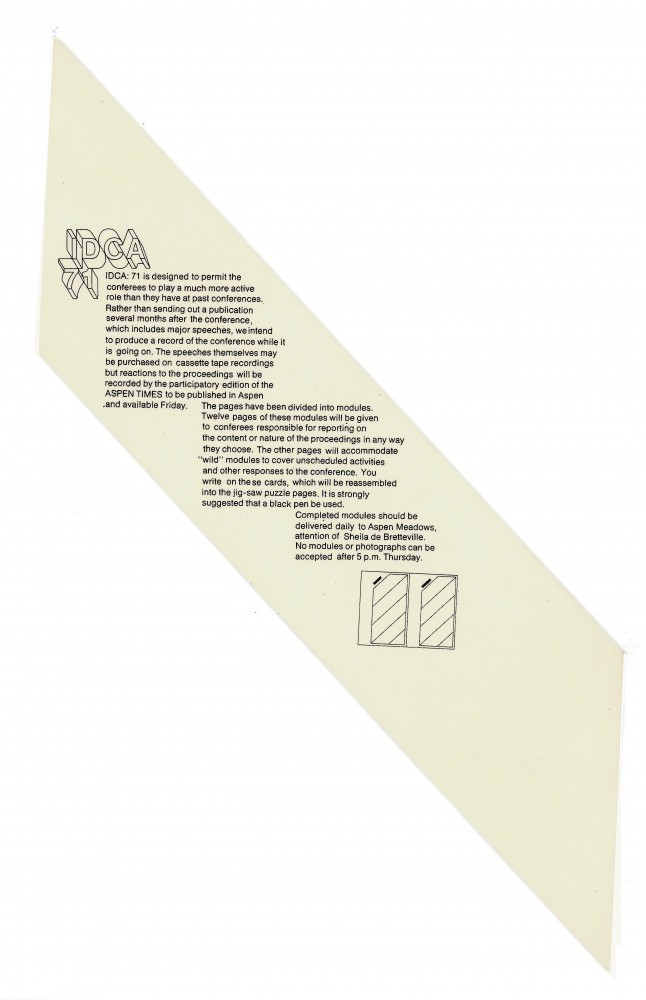 Sheila Levrant de Bretteville, Invitation to participate in the special issue of the Aspen Times for the International Design Conference at Aspen, 1971. 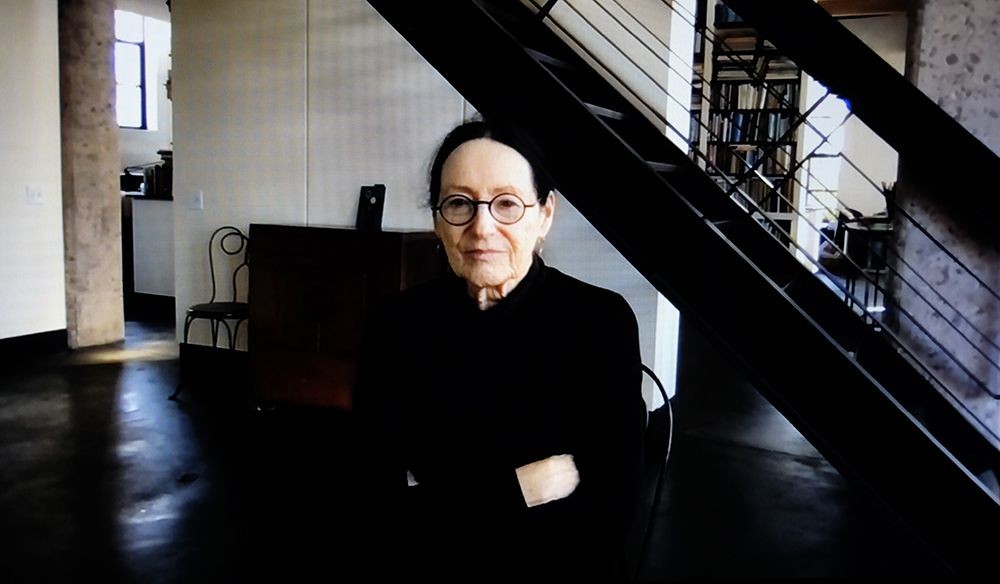 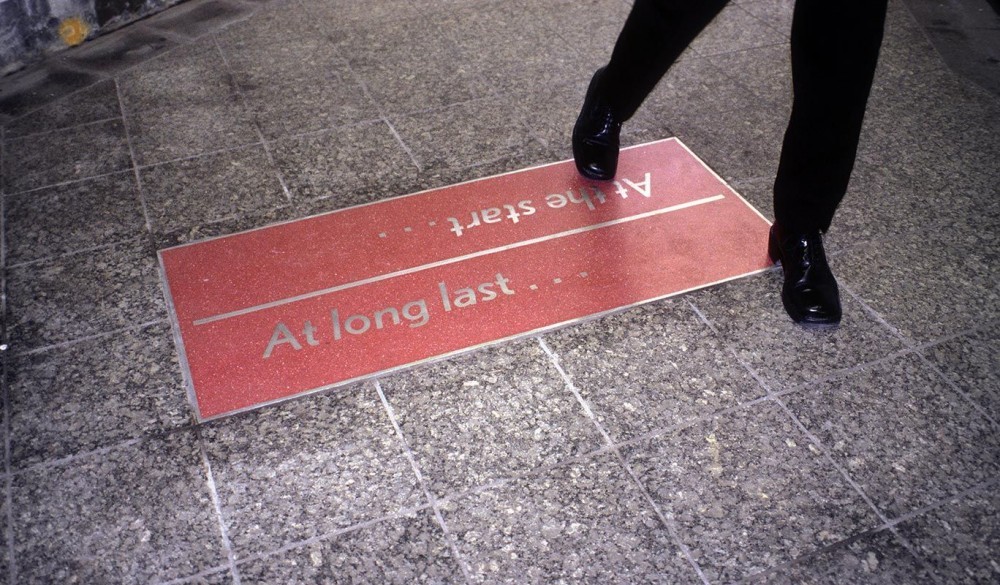 Sheila Levrant de Bretteville, At the Start... At Long Last... (1999), at the northern terminus of the A train in Inwood, New York. 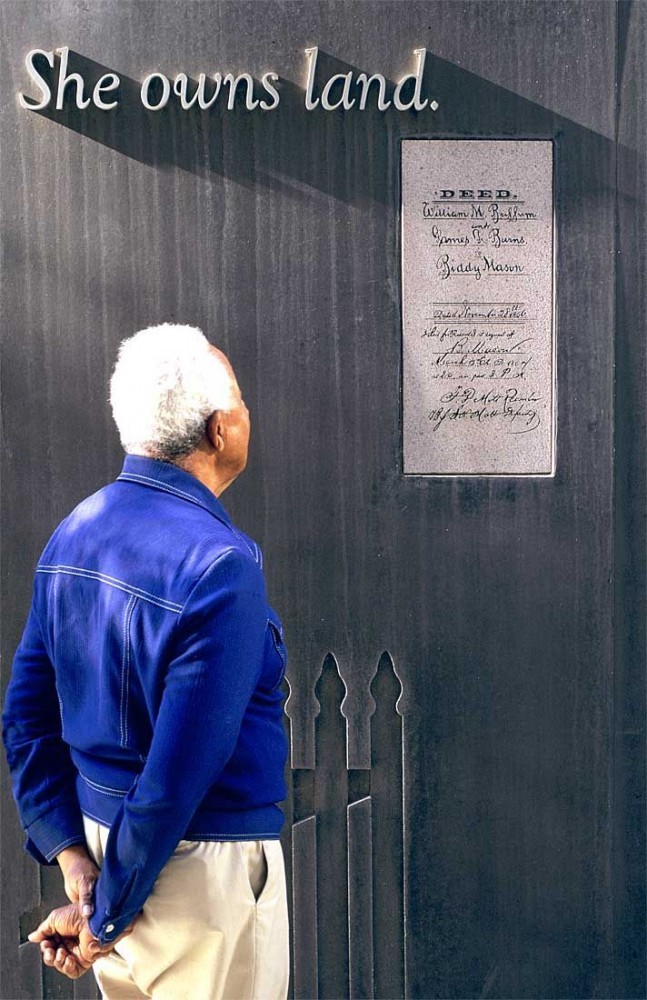 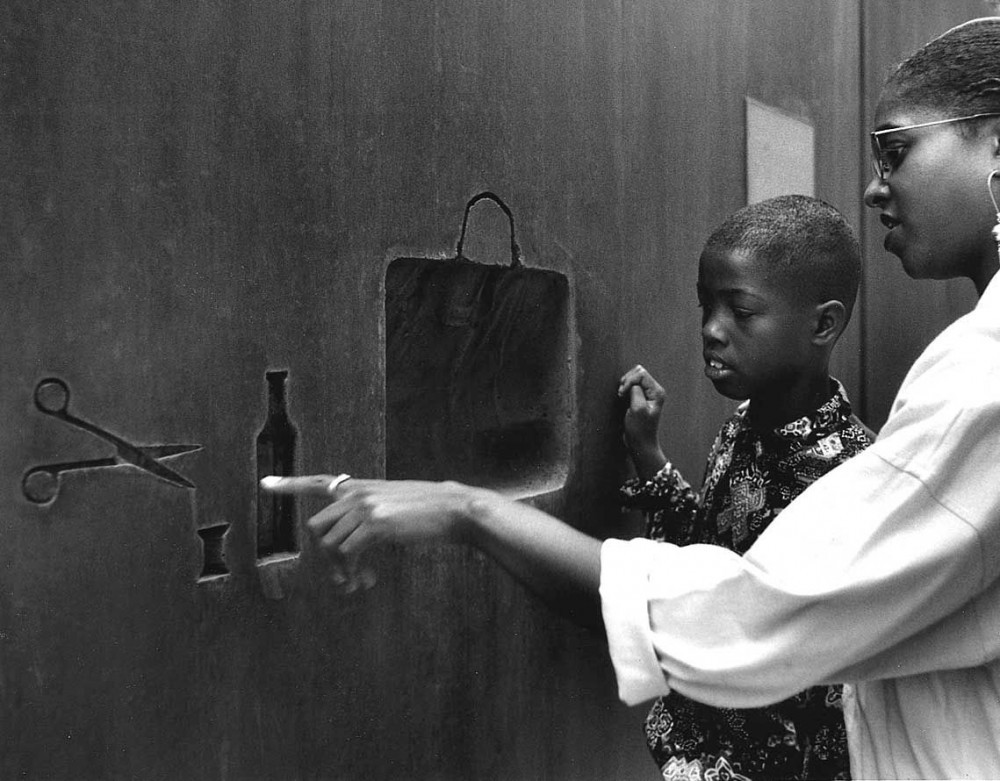 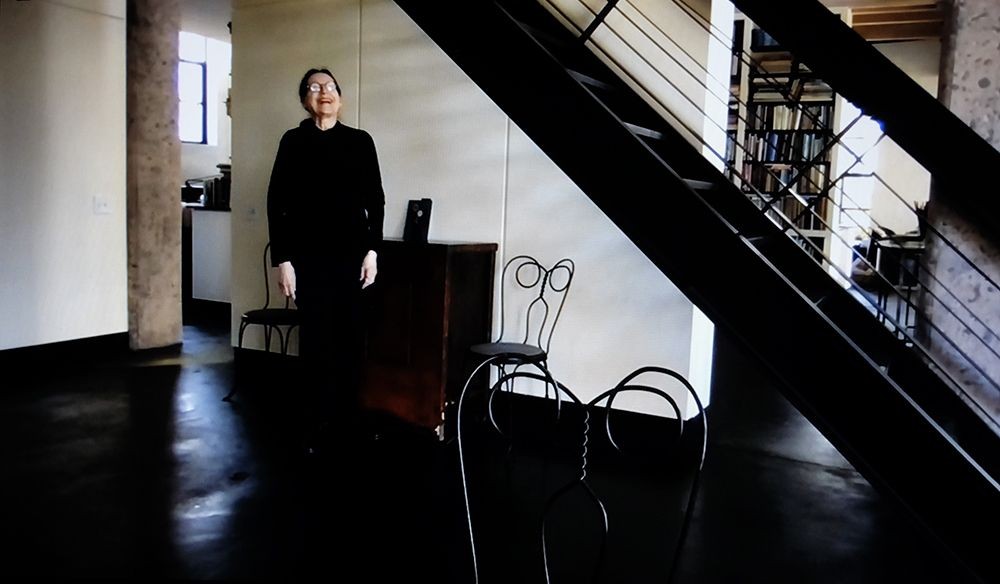 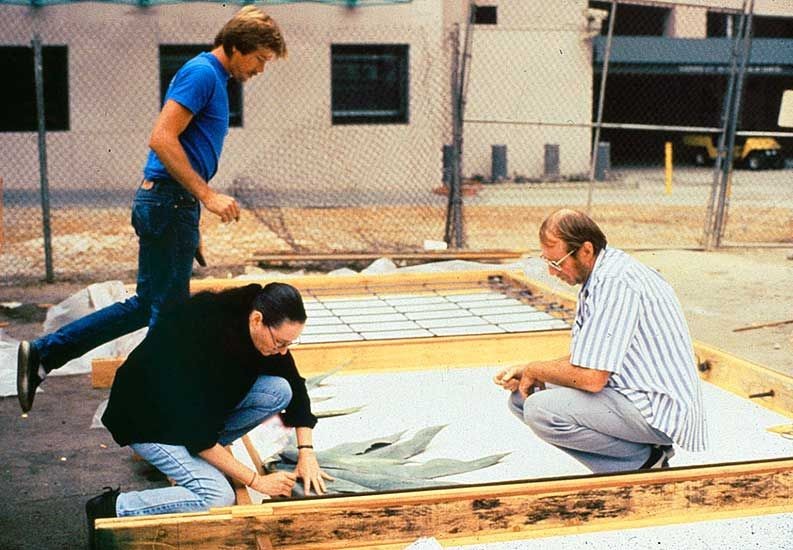 Sheila Levrant de Bretteville and colleagues working on one of the cast concrete panels for Biddy Mason: Time & Place. 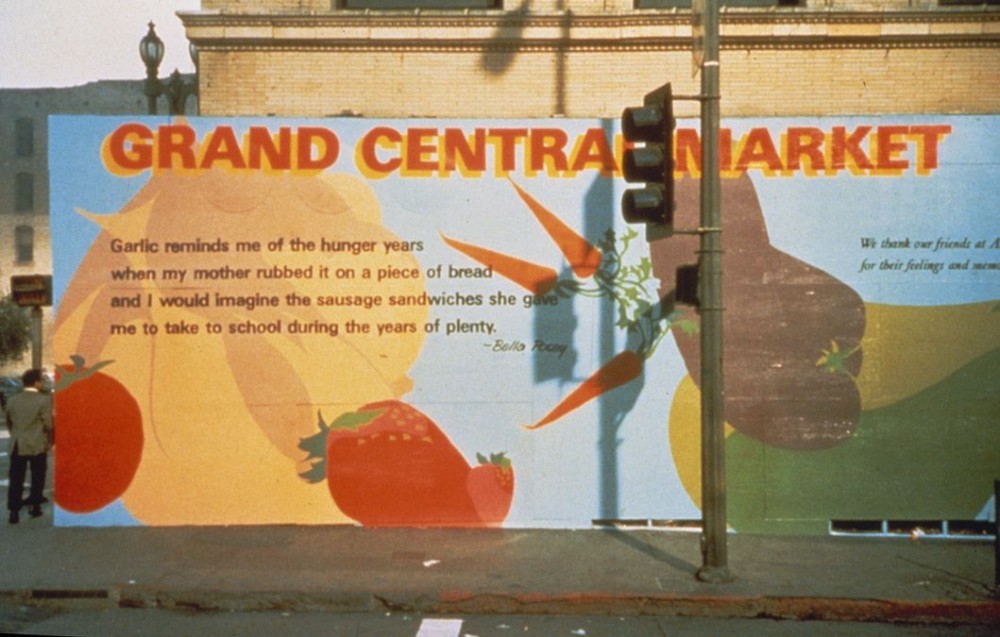 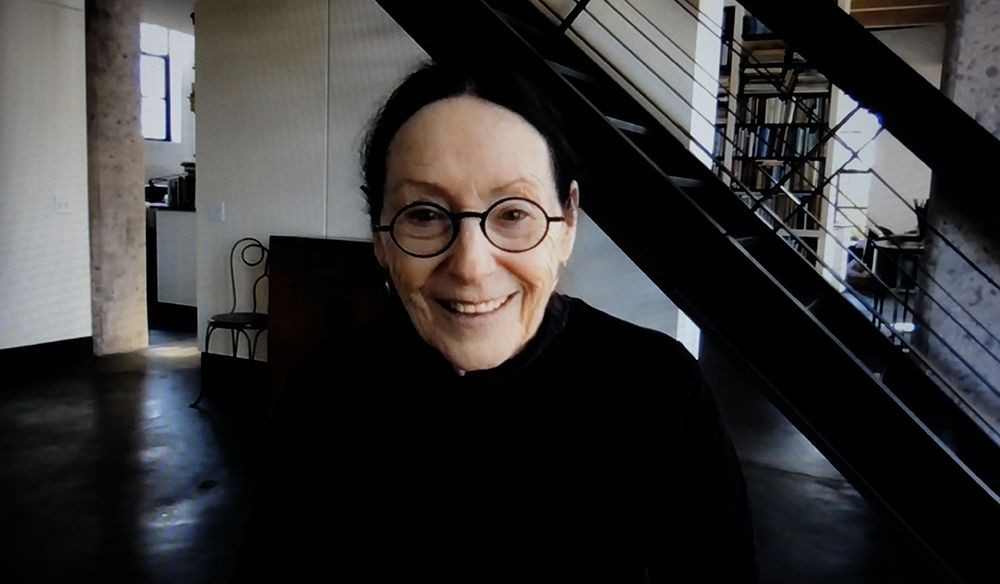 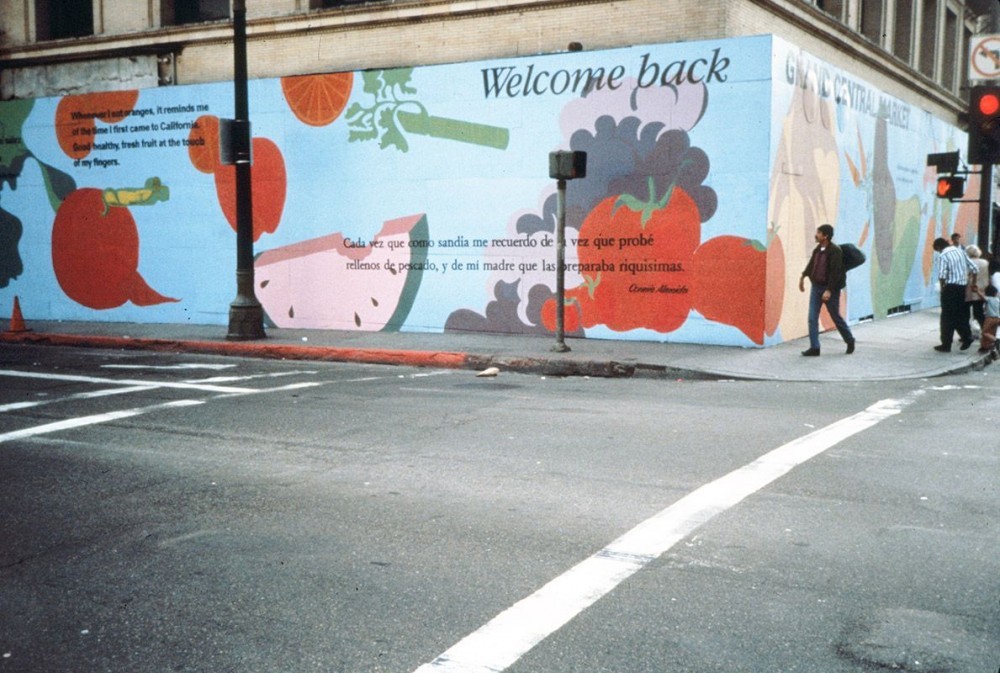 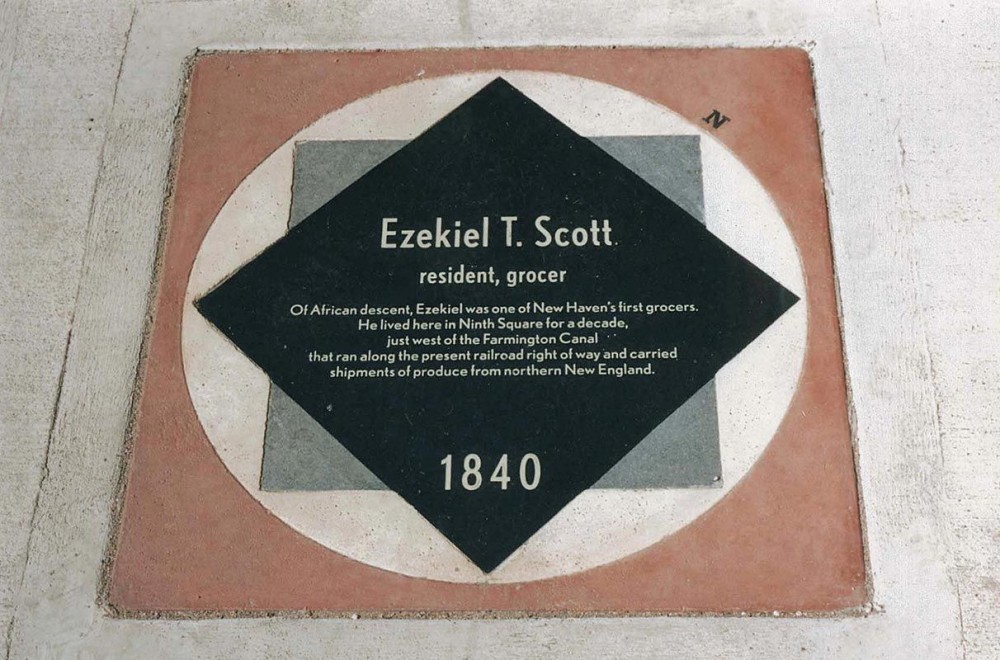 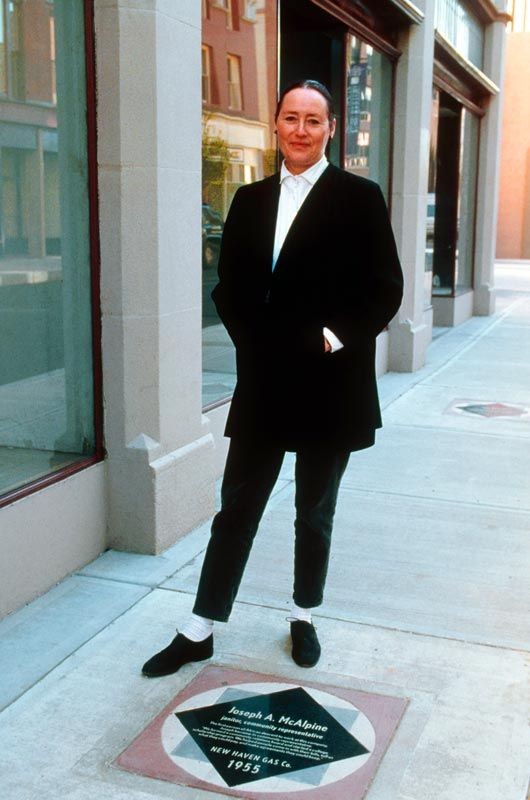 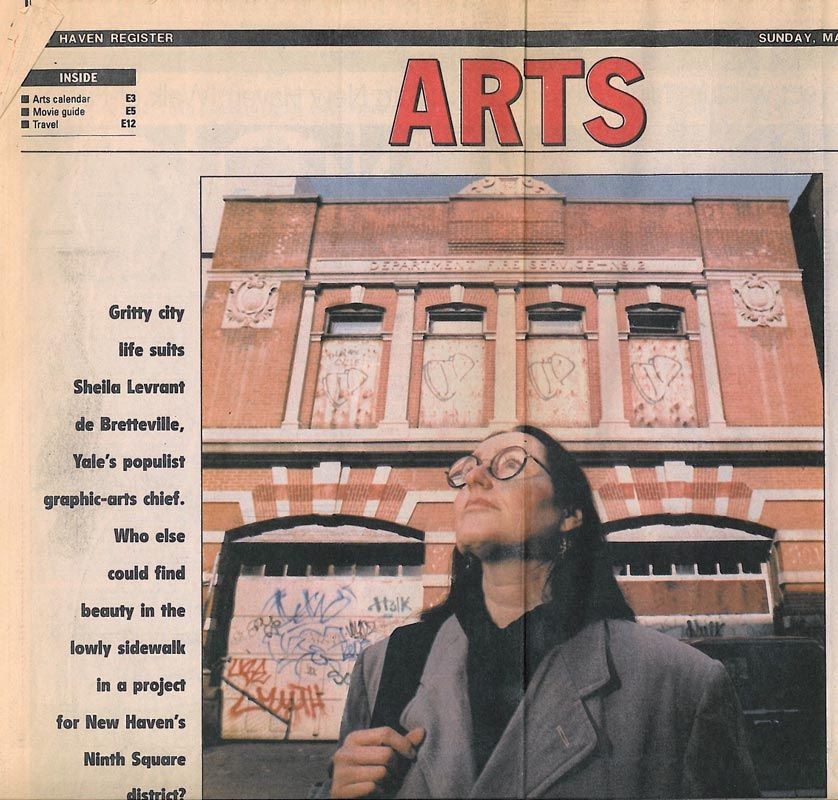 ARTS newspaper featuring a profile on Sheila Levrant de Bretteville for her 1993 Path of Stars project in New Haven, Connecticut. 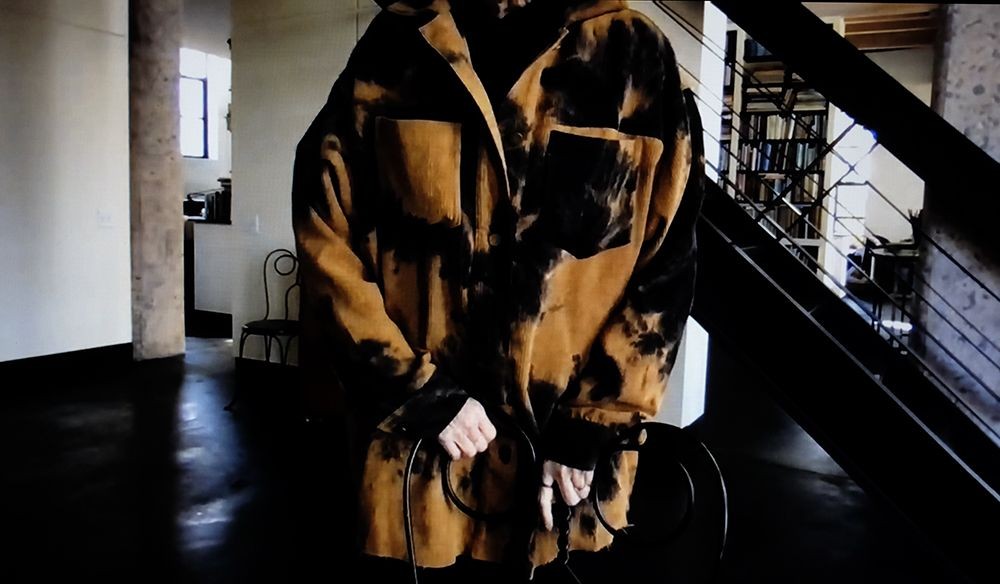 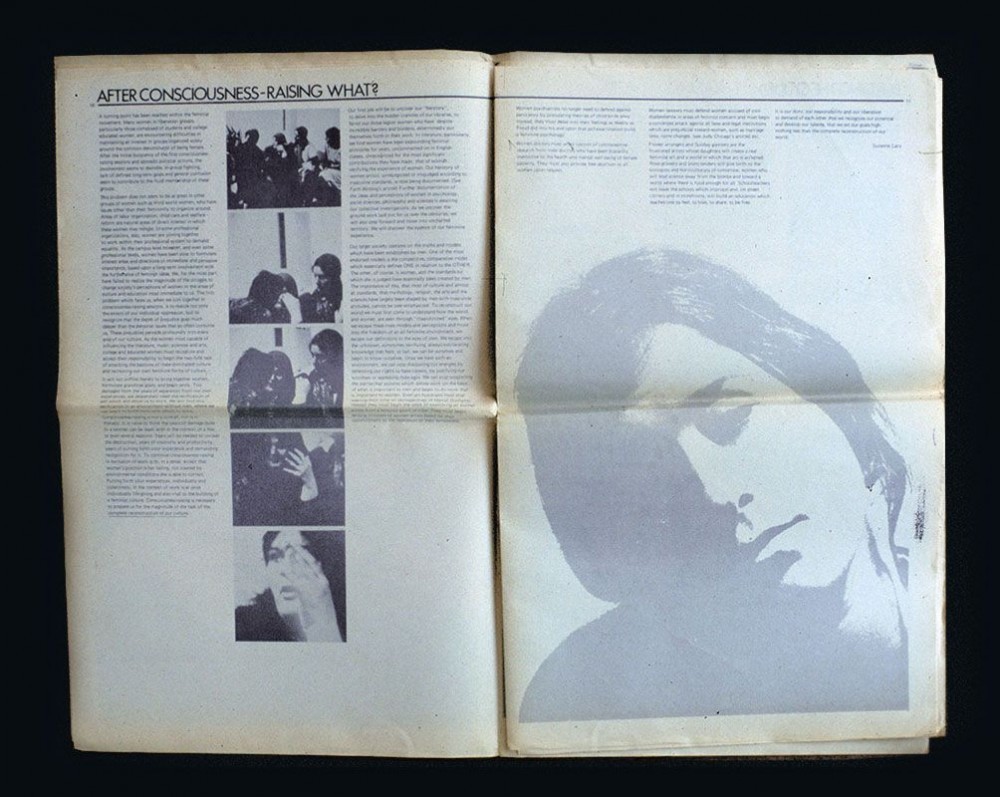 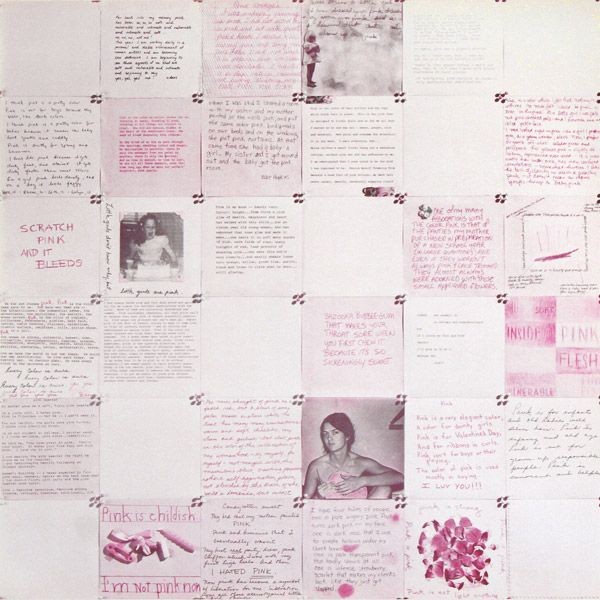 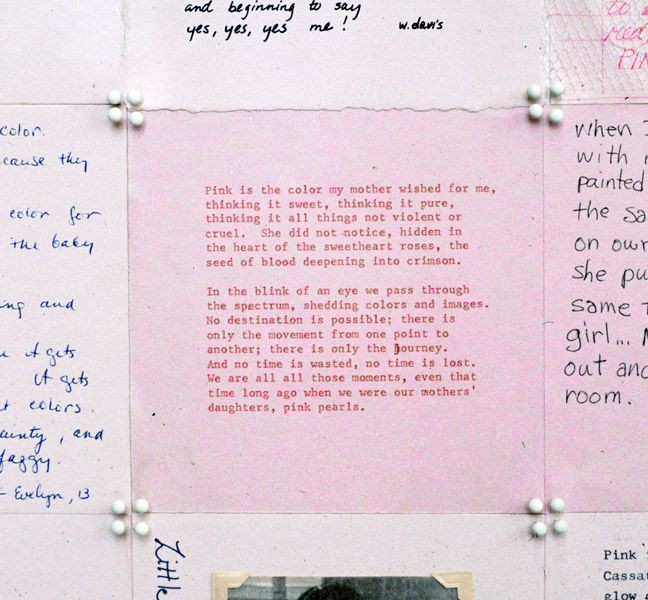 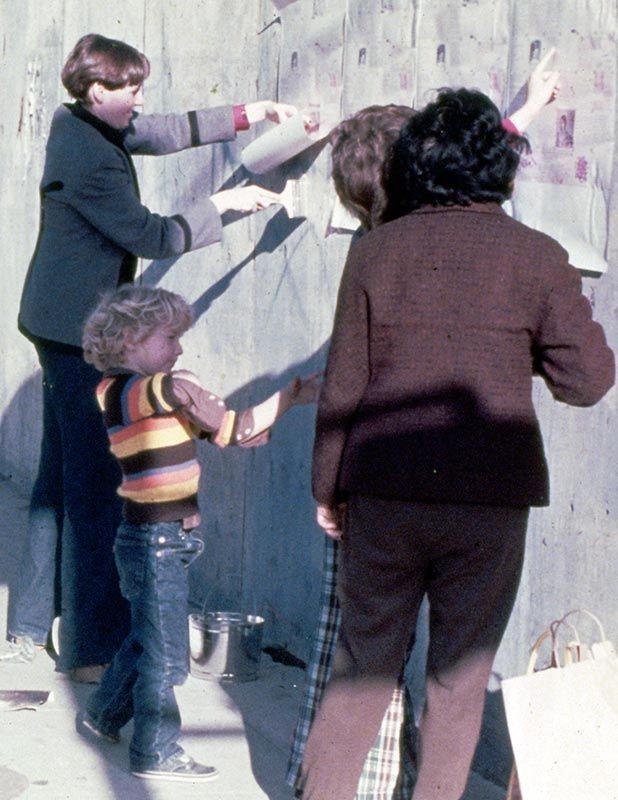 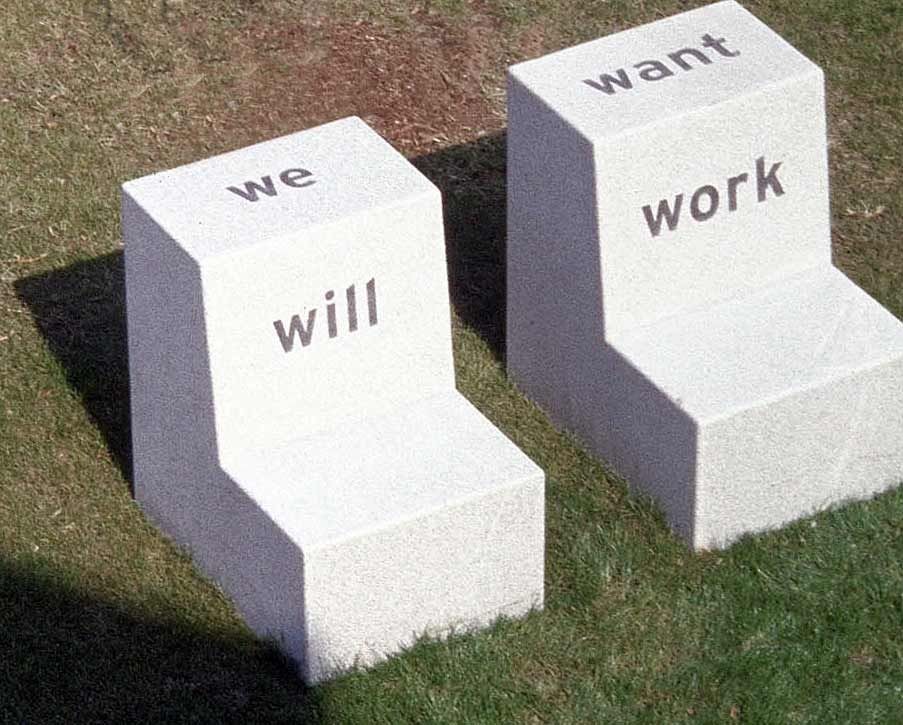 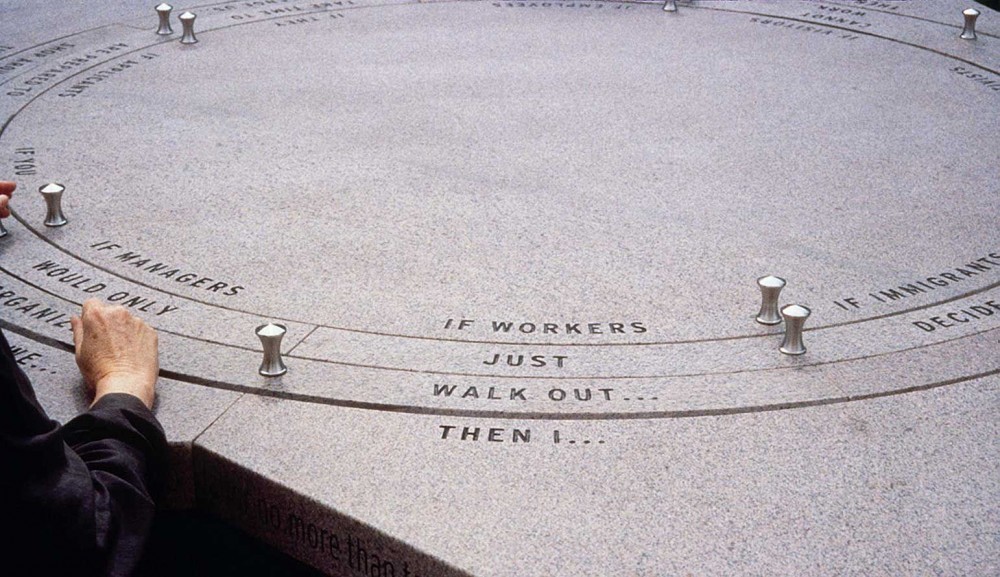 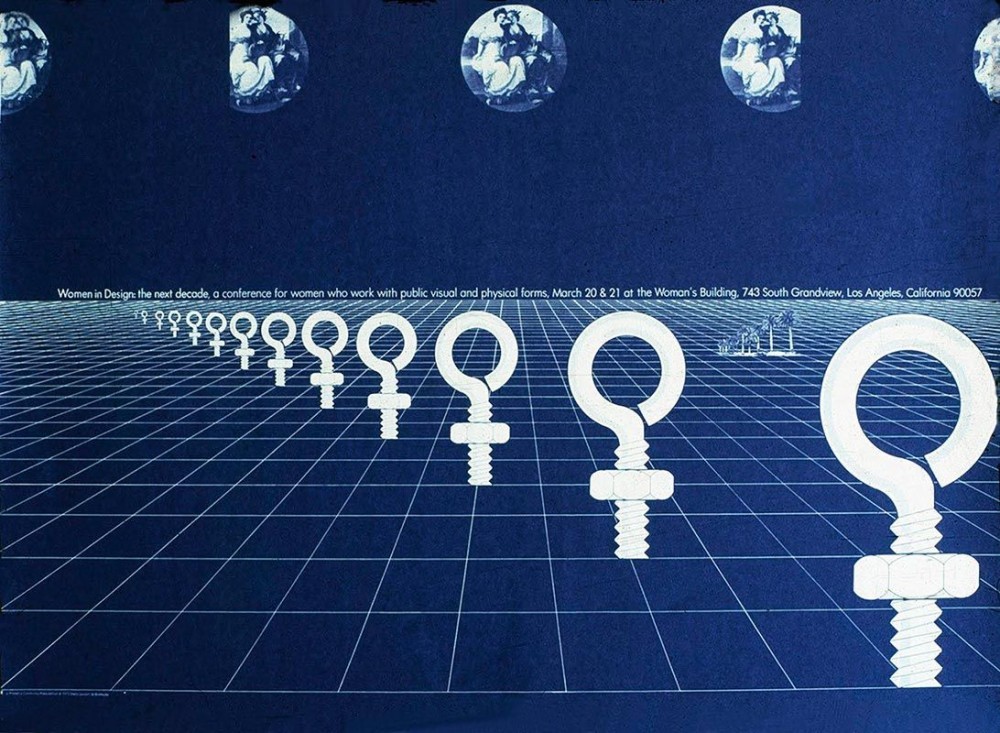 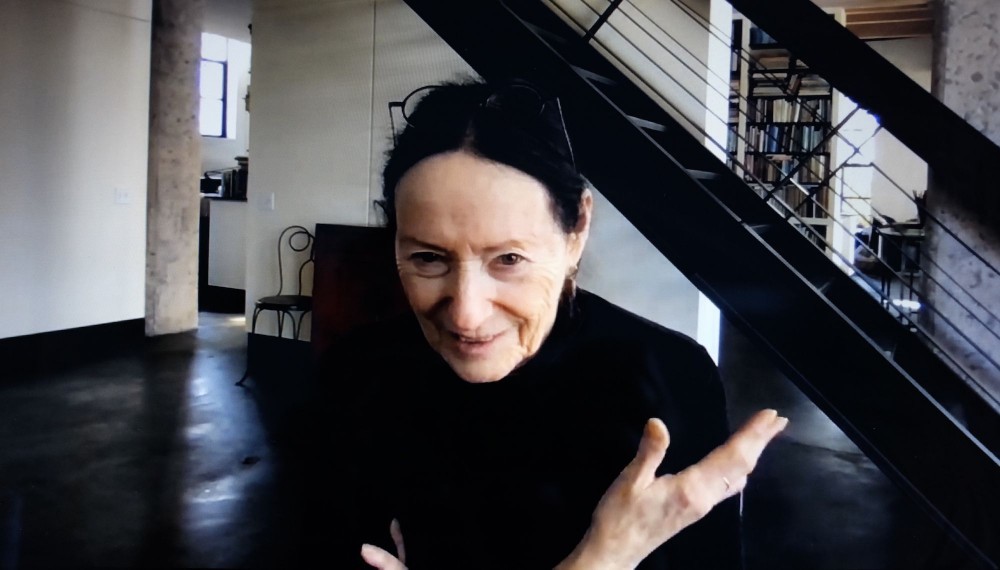 In the small and rarified world of graphic design, Sheila Levrant de Bretteville is nothing short of an icon. The 80-year-old artist, designer, and educator has left her mark on some of the most important parts of recent graphic design and art history, from championing feminist principles and user participation in design to celebrating local communities via thoughtful public art projects. But just as importantly, by introducing a new pedagogical philosophy, which encouraged a generation of designers to approach working for clients as not just a commercial endeavor but a way to explore their own interests and build a cohesive practice. As the director of the Yale University Graduate Program in Graphic Design since 1990, the Brooklyn native has nurtured the careers of thousands of graphic designers — the people behind the books we now read, the signs we follow, and the visuals that seduce us. Graphic design has been a crucial part of PIN–UP since its inception in 2006, and it is no coincidence that all of the magazine’s design directors — Geoff Han, Dylan Fracareta, Erin Knutson, and today Ben Ganz — were students of Levrant de Bretteville’s. With so much of PIN–UP’s design DNA originating from the same source, we couldn’t imagine our anniversary issue without her. From her home in New Haven, Levrant de Bretteville spoke to Knutson, and candidly posed for Julika Rudelius’s camera.

Erin Knutson: Who are some of the people you admire or whose creative legacies have opened things up for you?

Sheila Levrant de Bretteville: My creative development had a lot to do with my parents. Each fled Poland’s antisemitism during the 1920s and in our household there was a constant flow of immigrants who’d made it through the concentration camps and managed to stay alive. My father was very politically aware. He grew up on a farm and didn’t receive his elementary-school diploma until he was 21 years old, but he had all these anarchist books. The house was also always packed with people. There was somebody living in every room, except the kitchen. Anybody who came with no place to live, we made a bed for them somewhere in the house. I was the only person of my age living there. At the same time, my mother was taking me to painting lessons at the Brooklyn Museum on the weekend. I went and learned to paint there. I already knew how to sew because we had a sewing machine and we made our own clothing. As a teenager I’d go to all the stores in Manhattan, returning to sketch whatever I wanted to have made for me at home. My mother worked as a milliner in a hat factory and my father worked in a place that decorated sweaters and also children’s clothing. I took home samples and rhinestones of every color.

What was your earliest experience with graphic design?

Lucky me, there was a design teacher at my high school, Mr. Leon Friend. He created a group called the Art Squad where students created posters for contests and for our neighborhood — for example, about seeing a doctor regularly. Mr. Friend found every design and painting competition in all of New York City and we made work competing for money prizes. So all of us kids out in Coney Island were winning prizes and getting paid to make our designs while in high school. Mr. Friend had actually written a book called Graphic Design, and it has sculptors and painters like Frida Kahlo, just all different people are included who made prints and artists who were all engaged in their countries of origin. Seeing graphic design as so inclusive truly fascinated me. When I’m asked, “What’s the difference between art and design?” I say it’s that we consider the audience for our work. And as result my own work became communitarian — it’s always about making differences visible.

After high school you attended Barnard, before doing the MFA program at Yale. Then you worked in Italy for a while, before moving to L.A., where you started the Woman’s Building in 1973, a place for women to educate themselves, to be together, and have access to tools. How did that come about?

Judy Chicago and I left CalArts to start the Woman’s Building with Arlene Raven. We wanted to be free of art-school bureaucracy and focus on women who knew there was something lacking in their story and who wanted to survive and thrive together. We learned about different social organizing, things that were going on like the See Red Women’s Workshop in London or the Black Panthers’ breakfast programs in San Francisco. We started by each woman telling her own history and the ways she’d felt disregarded. Each woman had felt disrespected, to put it mildly. And I invented new methods of teaching. For example, each woman made a poster about what made her feel uncomfortable in a public place, and then, getting permission from the owner of the store or wherever, she’d put the poster up at that place. Some ended up having conversations with the men there about what would make a woman like her feel more comfortable. Women are still being treated like shit, but nowadays race requires our attention more than feminism. Hazel Carby (Emeritus Professor of African American Studies and American Studies at Yale University) recently pointed out to me that at the original Woman’s Building (designed and built for the World’s Columbian Exposition held in Chicago in 1893), which inspired our name, white women had excluded women of color from all positions of power. I didn’t know that disgusting behavior when we named the Woman’s Building — we most certainly would have come up with a different name.

How did you want the graphic design program at Yale to change when you took over?

I had a sense that what had to go was telling people what todo. I certainly did not want to be telling mature graduate students what subjects to address in their work. I saw then and still see now that teaching is a conversation much more than a lecture. I wanted students to pick their content, because in choosing they find out what they’re interested in, they find their voice. I have also always tried to be inclusive and I have a genuine interest in what the other person is thinking, and that has always been a part of my work as well. Everyone wants to find and develop their own material now. They’re finally coming around to valuing subjectivity and embracing differences.

You’ve said before that your teaching philosophy was to give each student a form of unconditional support.

There is a sort of emotional intelligence that goes into building a program. But someone recently called me the “mother of us all” when referring to the Yale program. It’s a little bit uncomfortable for me because I don’t see myself as the mother of anybody other than my son Jason. Empathetic responses are generally associated with women, which seems confining. It’s the most stereotypical kind of thing. Many men are empathetic. As teachers, empathy helps us pick up what students mean.

How do you teach people to teach themselves?

Students must get some sense of their own resilience. If you can really begin to see where you are resilient and where you’re not, then you have a better chance. Go where you feel most resilient. There are certain systems; the systems have rules; and if they’re not willing to break those rules for you, you might be disappointed. But then how do you deal with that disappointment? You’re going to be disappointed by lots of things. You have to get over it. When I was in high school, I did water ballet. My job was to teach people how to float, which means you must get them to be calm and unafraid — otherwise they’re not going to float. You have to make it possible for them to feel that they’re okay in the water, that the world can be a safe place and you can just let go. Teaching is rather like that.

Is there any design out there now that you really like?

I see work that I enjoy all the time. Recently I discovered work by Julie Peeters. In addition to her fulltime job, she makes this magazine BILL. It has no text, just images, entirely visual. She found skilled men in a monastery — religious, disciplined folk and really good printers — to print the magazine. I like that she’s doing something she really wants to do. Felix (Burrichter) is doing something similar with PIN–UP. I think it is something he really wants to do. And he’s also giving others the opportunity to design it. These designers just happen to be from our program, but each of you is very different. Nothing’s alike about any of you, and you all want different things from the work you do. PIN–UP is changing with each of you, which is something fresh and very good.

How do you see the future of design?

We have been in a moment of massive change. Of course, it’s going to have a huge effect on design, although it’s not clear precisely what kind of effect it’s going to have. I think clean design is really past for now. Forget it. Right now, we’re looking how to make complexity and differences visible and desirable. I don’t mind chaos. Because when you clean, what do you do? You take away something. There’s something about cleaning that takes away a certain amount of chaos. But in order to move things ahead you need a bit of chaos: including differences in thinking and lived experience can make chaos very productive.