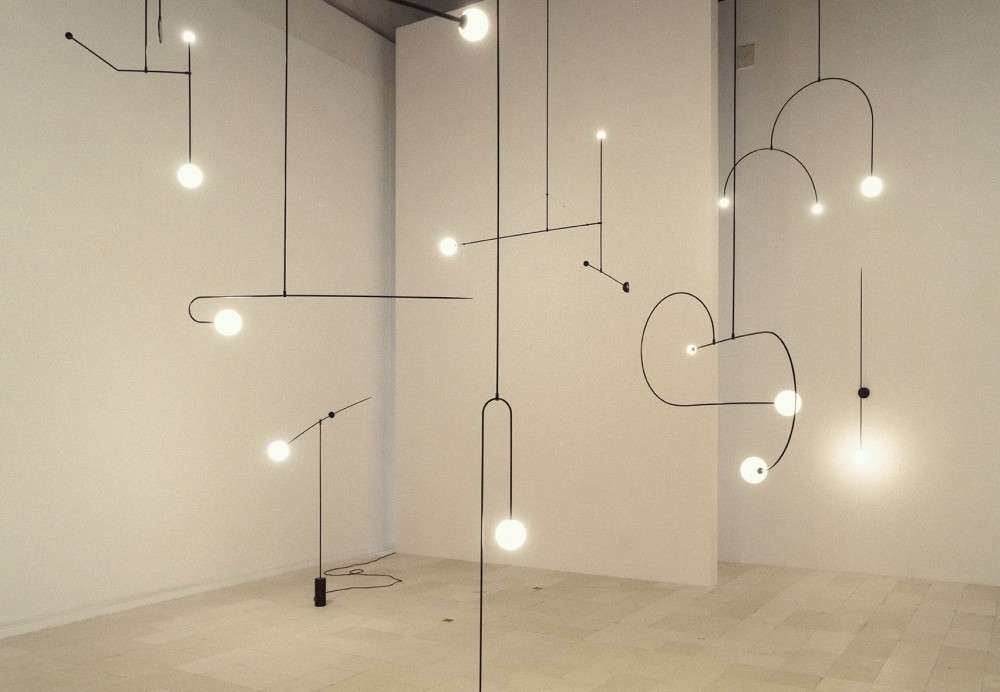 Michael Anastassiades, Mobile Chandeliers (2008 onwards); Exhibition view from Things That Go Together, on view through July 20, 2019 at NiMAC in Cyprus. 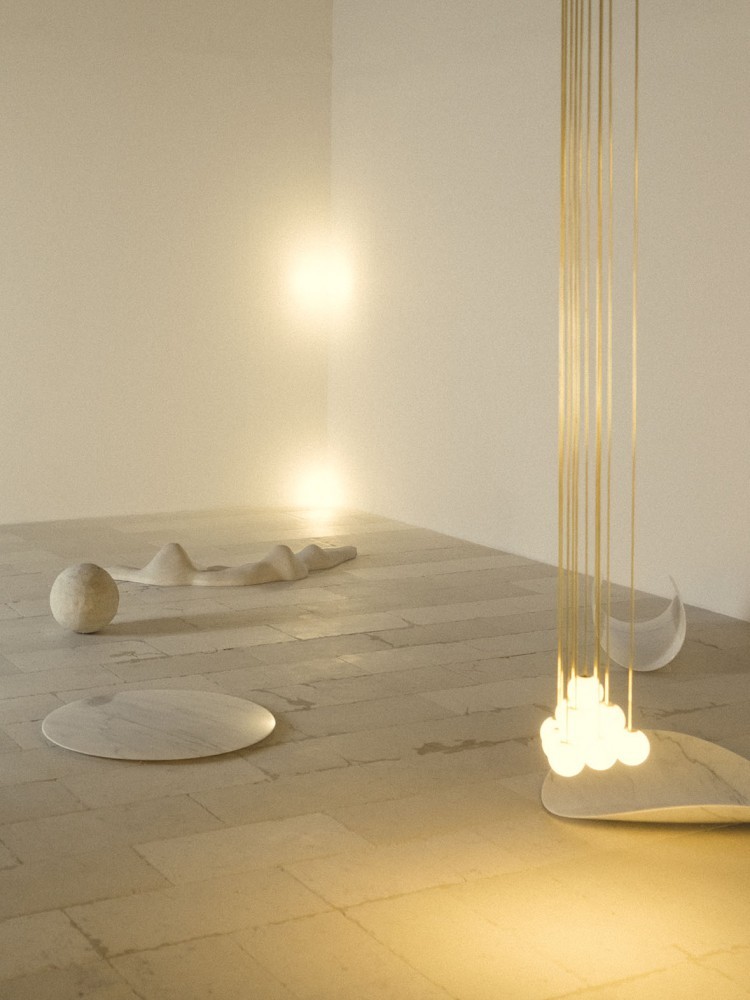 Hanging: Happy Together 10 Stack (2015); Polished Brass and Mouth Blown Glass. On the floor: Miracle Chips (2013); Statuary White Marble. Installation view from Michael Anastassiades’s Things That Go Together, on view through July 20, 2019 at NiMAC in Cyprus. 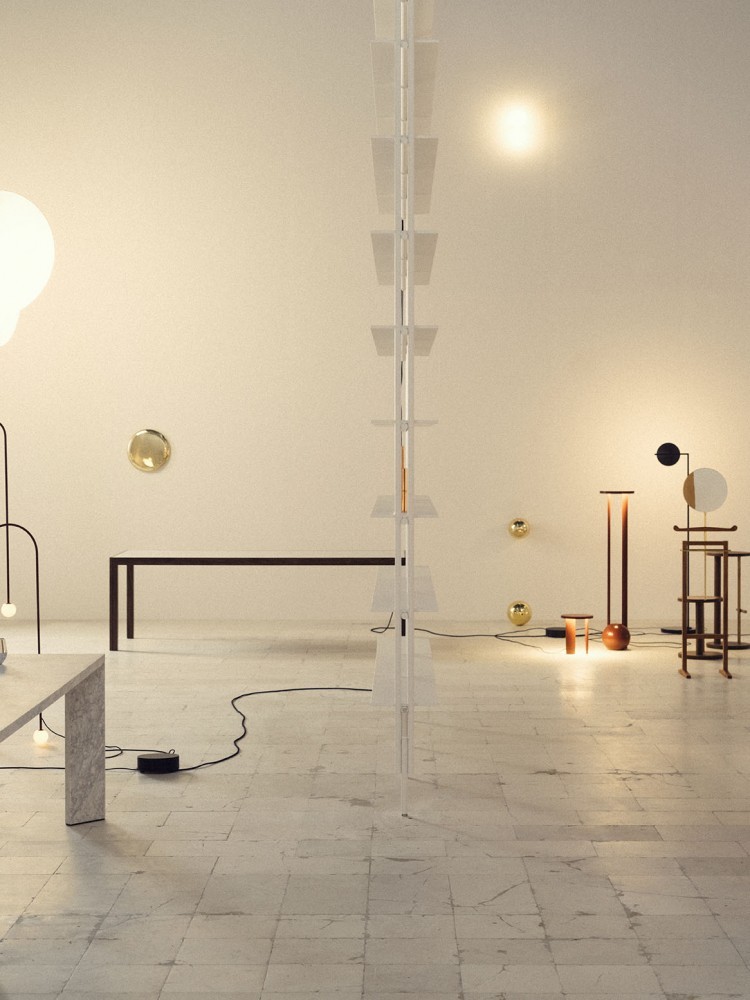 Things That Go Together (through July 20, 2019) presents Anastassiades’s design process through his research, personal collection of objects, and finished works from the studio archive. 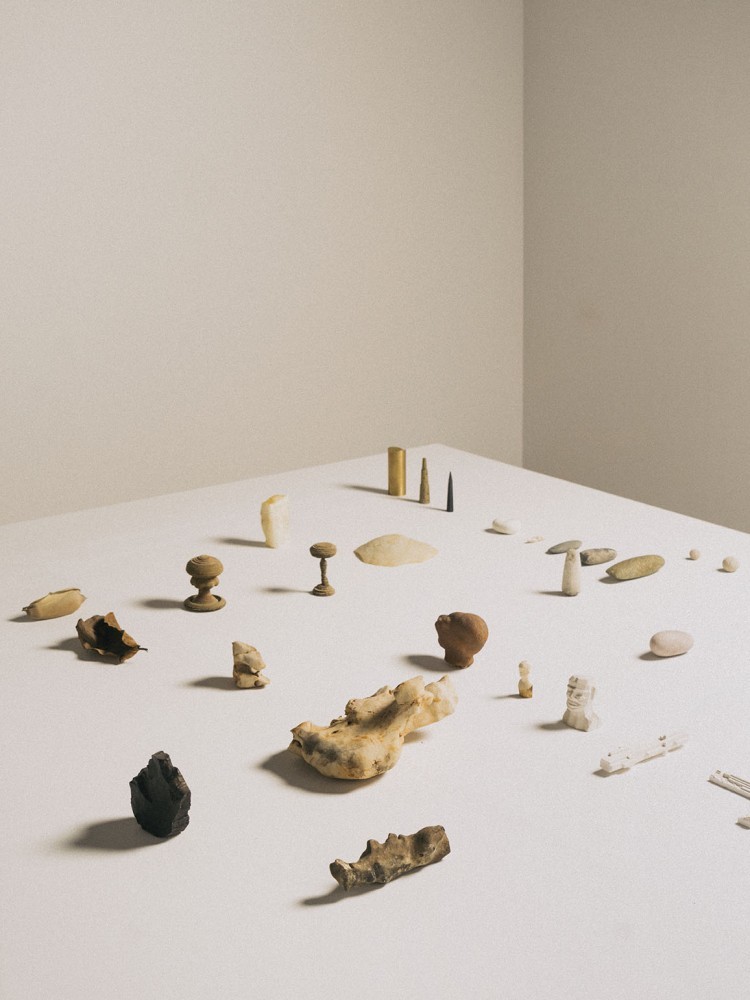 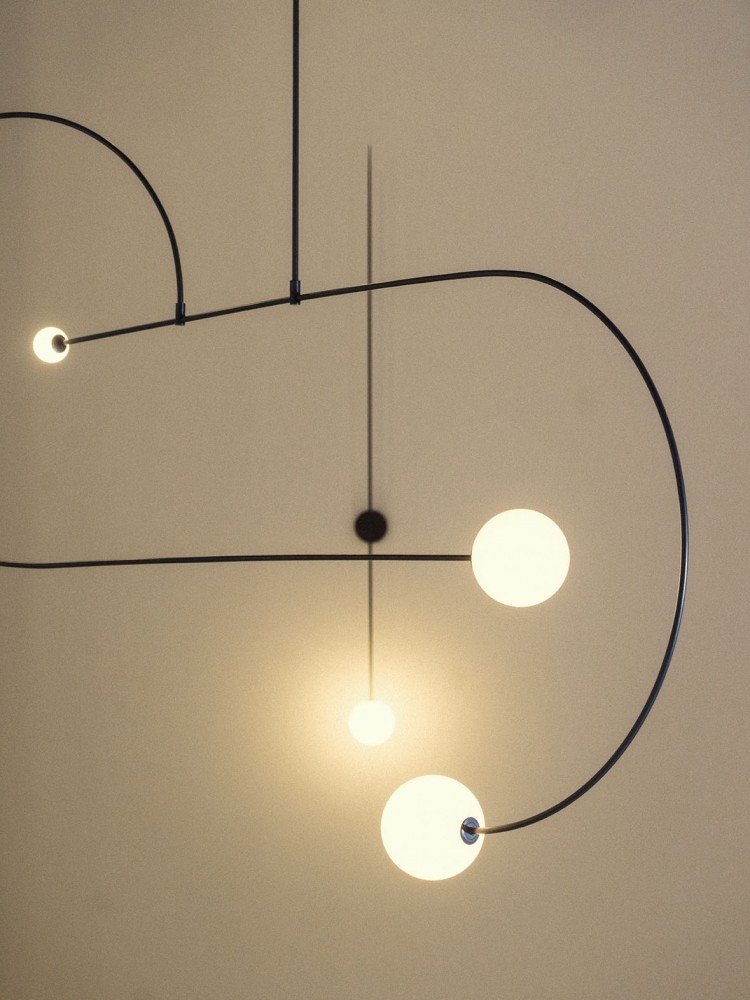 Michael Anastassiades, Mobile Chandeliers (detail) (2008 onwards); Exhibition view from Things That Go Together, on view through July 20, 2019 at NiMAC in Cyprus. 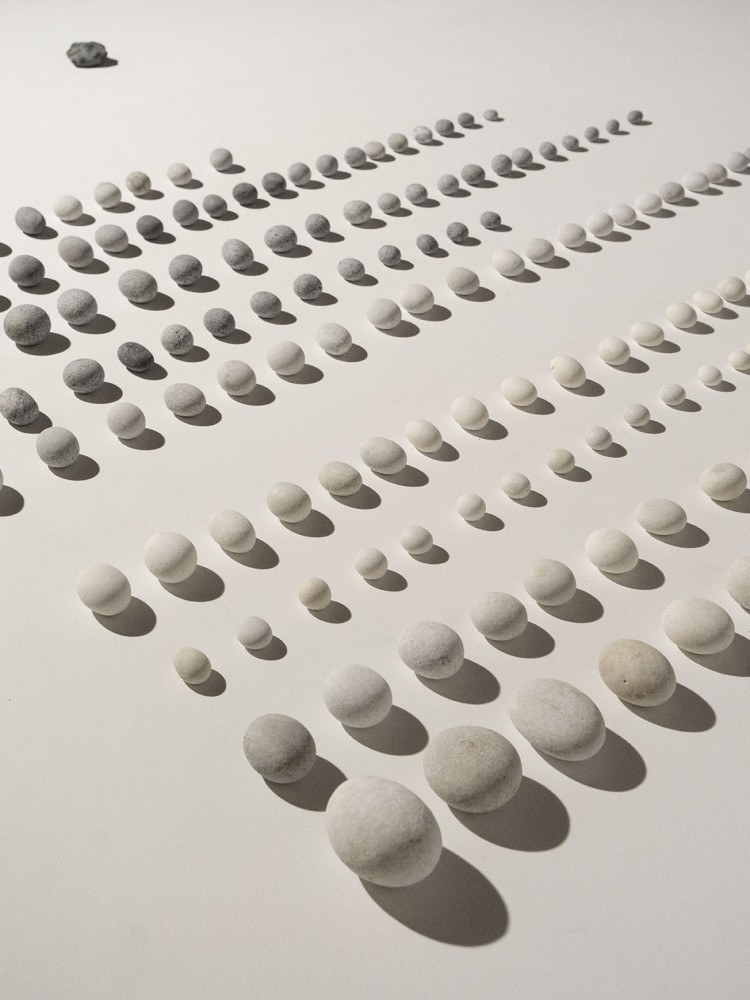 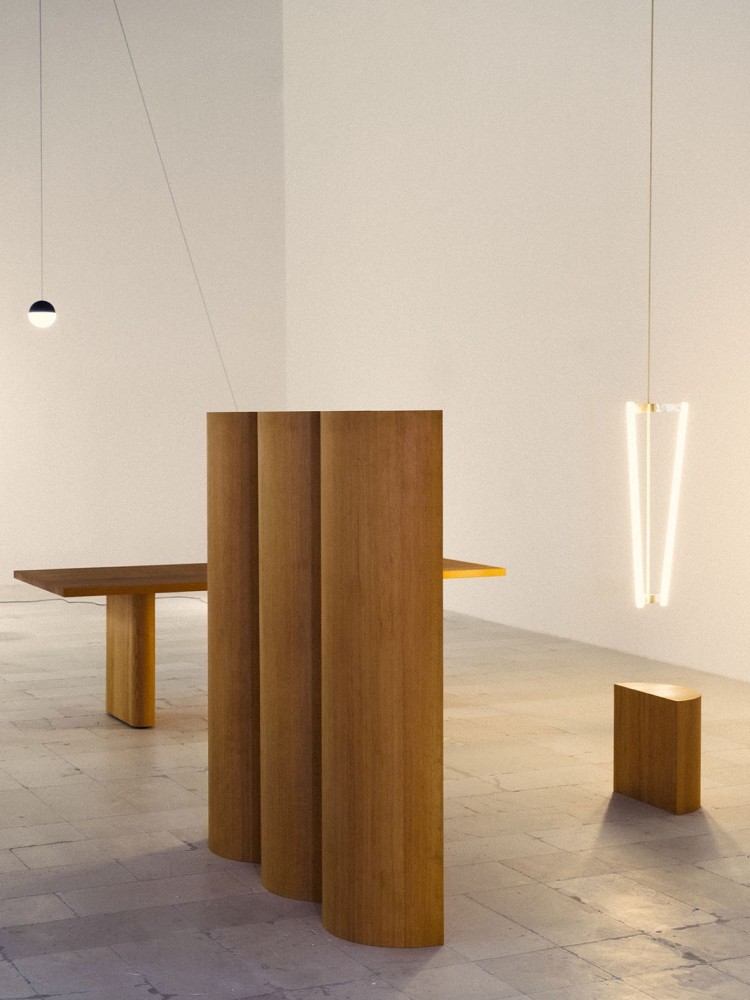 Screen, table, and stool: Half Way Round (2018) for Dansk Møbelkunst; Oregon Pine. Background: Tube Chandelier (2006); Satin brass. Installation view from Michael Anastassiades's Things That Go Together, on view through July 20, 2019 at NiMAC in Cyprus. 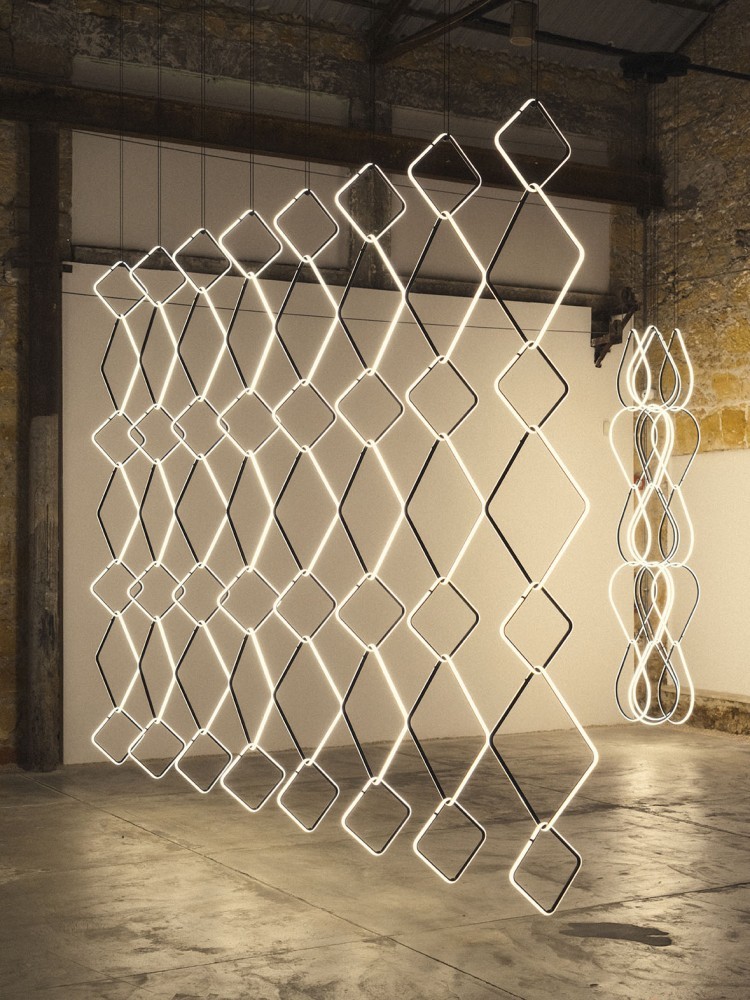 Michael Anastassiades, Arrangements series for FLOS (2017); Exhibition view from Things That Go Together, on view through July 20, 2019 at NiMAC in Cyprus.

Arrangements is a modular system of geometric light elements that can be combined in various ways to form multiple compositions of individual chandeliers. 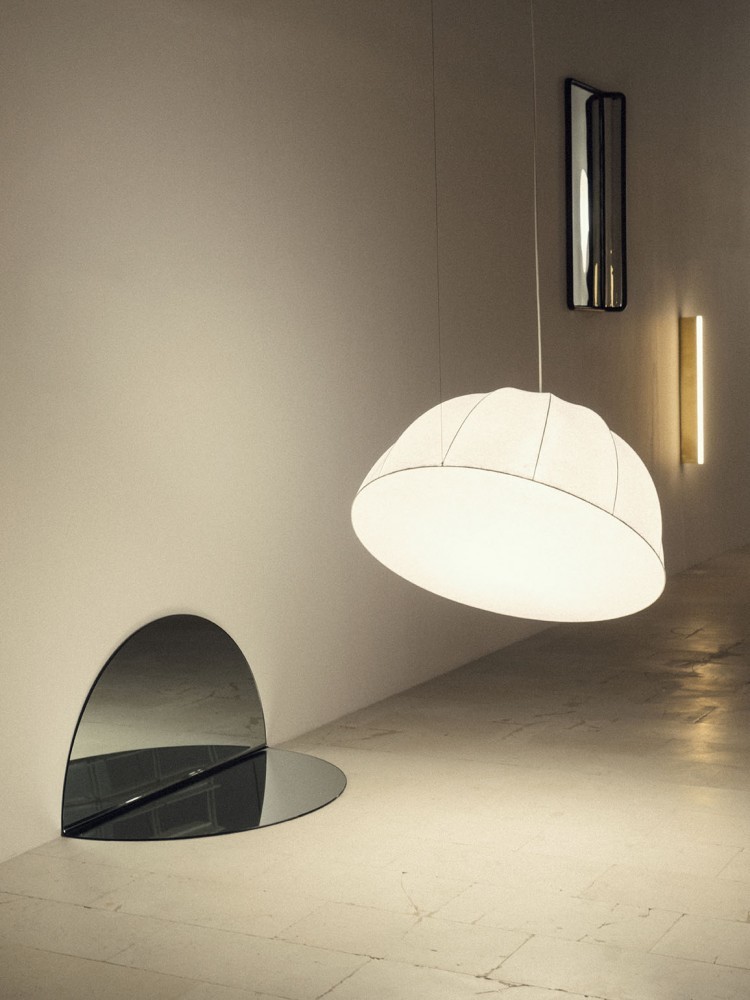 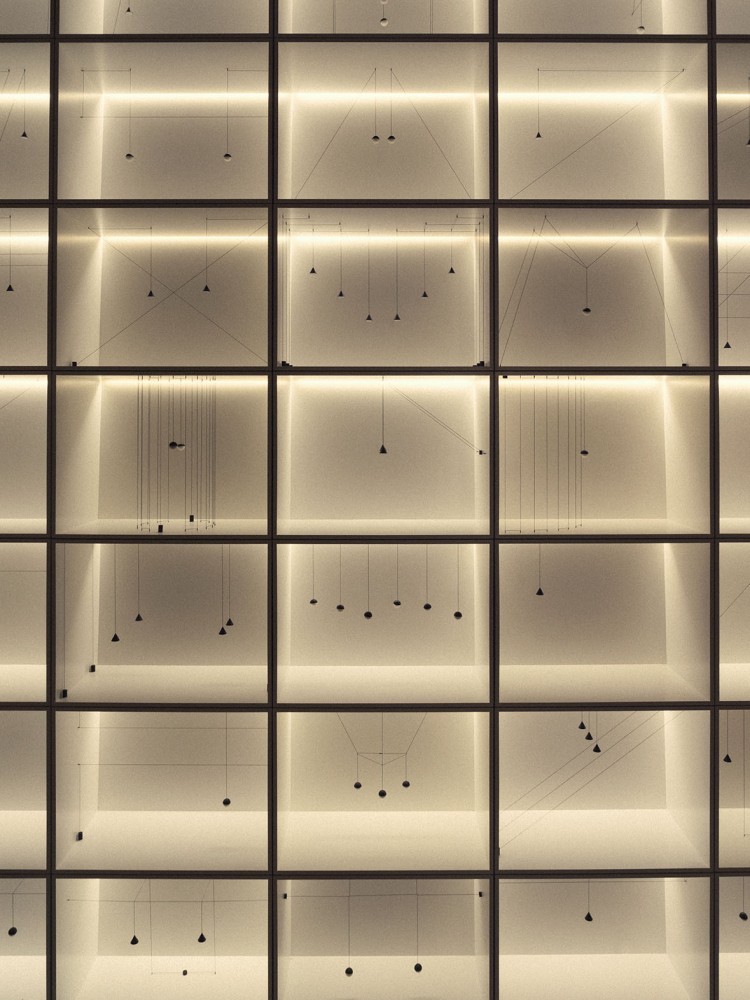 Michael Anastassiades, String Lights (2013); Exhibition view from Things That Go Together, on view through July 20, 2019 at NiMAC in Cyprus.

The String Light was the first collaboration with FLOS in 2013. The project is a gesture of handing creativity to the user. A lamp with an extra long fine cable that can be configured in endless ways, by simply stretching it over selected points on the ceiling, wall or floor, to create subtle interventions in space. 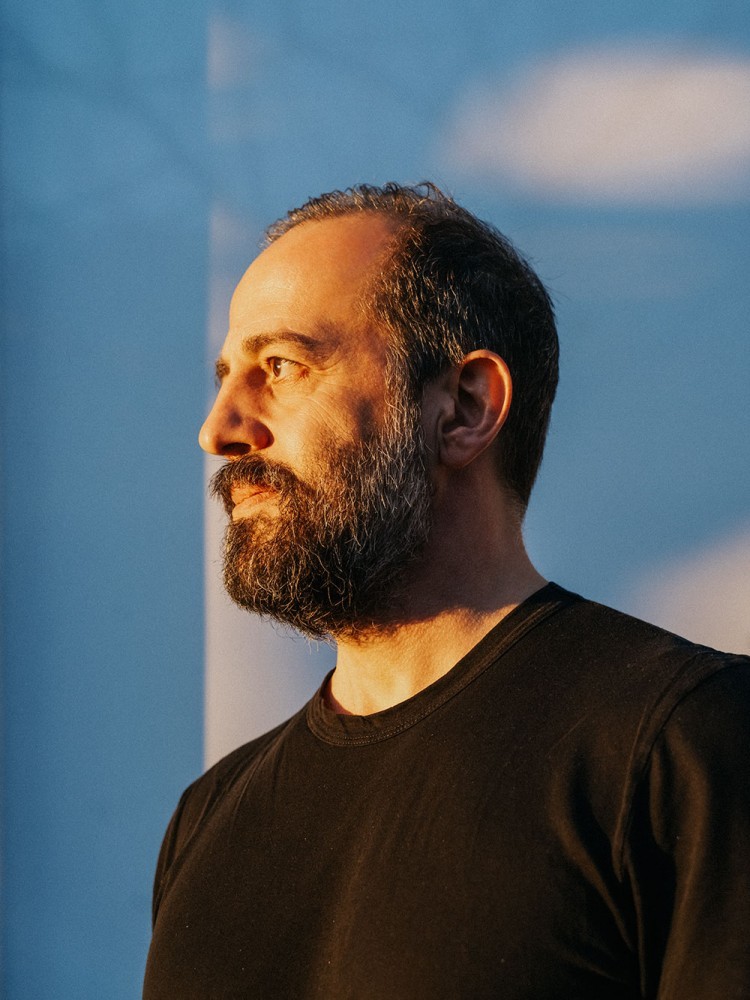 “Designers always look forward,” says London-based, Cypriot-born Michael Anastassiades, “so looking back at first seemed an impossible task.” But hindsight and stocktaking were precisely his business with Things That Go Together, a self-curated retrospective survey show which opened in early March at NiMac — the Nicosia Municipal Arts Centre, housed in a former power station in the island’s divided capital, a stone’s throw from the United Nations Buffer Zone (aka the Green Line) which separates the Republic of Cyprus (an E.U. member) from the Turkish Republic of Northern Cyprus (established in 1974 after the Turkish invasion). At the opening, Anastassiades told well-wishers his work contains many references to his place of birth, a puzzling statement perhaps when confronted with his elegantly minimal creations, the best-known of which must surely be his IC Lights, designed for FLOS in 2014.

In his opening speech, Anastassiades was also adamant he’s not an artist — these are everyday objects, he insisted, which is why he eschewed plinths and placed most of them directly on the floor. Lighting dominated the show, NiMac’s entrance glowing in the brilliance of his 2017 Arrangements series for FLOS, which he described as a corrective to his 2013 String Lights (also for FLOS). “String Lights was a very meaningful project for me because of the gesture of giving back creativity to the user — you can attach the string of lights to different points in space and it’s like a 3D drawing,” he explained. After its launch, he continued, people deluged him with photos of their String Lights in “the most dreadful configurations that I never would have thought of!” While Arrangements also lets users compose their own permutations, “this time I thought, ‘Okay, I’ll give people less freedom, and maybe the result won’t be quite so shocking.’” Other (high)lights at the show included his Mobile Chandeliers (2008 onwards), perfectly counterbalanced à la Alexander Calder but balletically susceptible to the whispering breeze — a simple, poetic idea which requires about 100 micro-components and is extremely fiddly to construct. “Simplicity takes a long time and is very hard to achieve,” observed Anastassiades with trademark understatement.

So where was Cyprus in all of this? Most obviously in the form of Keepie Uppie, a 2014 sandstone sculpture modeled on the Kyrenia mountain range in the occupied north. Or in his personal collection of stones and found objects, which he’s been assembling since childhood, and which includes his search for “the perfect sphere in nature” after he was given an almost flawlessly spherical pebble by a family friend, architect Neoptolomos Michaelides. But, says close collaborator Stefano Rigolli, Cyprus permeates Anastassiades’ oeuvre via his obsession with “uncertainty, anxiety, and imbalance” — the just-about-to-topple IC Lights, the easily upset Mobile Chandeliers, the nerve-wracking marble span of his Love Me, Love Me Not dining table (2017, for Salvatori), the restive rolling loudspeaker Beosound Edge (2019), the suspended-beanstalk angst of his Jack bookcase system (2018, for B&B Italia), the sword-of-Damocles daring of his One Well Known Sequence lighting rods (2015, for Nilufar), and so on. Just six when war split the island, Anastassiades is indelibly marked by Cypriot trauma, and, artist or no (the point is debatable), channels this collective melancholia into the delicate, fragile poise of his deceptively simple creations.

Things That Go Together is on view through July 20, 2019 at NiMAC in Nicosia, Cyprus.